Photodynamic therapy (PDT) works through the photoactivation of a specific photosensitizer (PS) in a tumor in the presence of oxygen. PDT is widely applied in oncology to treat various cancers as it has a minimally invasive procedure and high selectivity, does not interfere with other treatments, and can be repeated as needed. A large amount of reactive oxygen species (ROS) and singlet oxygen is generated in a cancer cell during PDT, which destroys the tumor effectively. However, the efficacy of PDT in treating a deep-seated tumor is limited due to three main reasons: Limited light penetration depth, the low oxygen concentration in the hypoxic core, and poor PS accumulation inside a tumor. Thus, PDT treatments are only approved for superficial and thin tumors. With the advancement of nanotechnology, PDT to treat deep-seated or thick tumors is becoming a reachable goal. In this review, we provide an update on the strategies for improving PDT with nanomedicine using different sophisticated-design nanoparticles, including two-photon excitation, X-ray activation, targeting tumor cells with surface modification, alteration of tumor cell metabolism pathways, the release of therapeutic gases, improvement of tumor hypoxia, and stimulation of host immunity.

The earliest light therapy for various skin diseases can be traced back to ancient Greece, Egypt, and India [1][2]. In 1907, Professor Hermann von Tappeiner coined the term photodynamic therapy (PDT) after incidental findings observed by his student Oscar Raab that fluorescence, a product of light and acridine together, was toxic to paramecium. Von Tappeiner and his partner, Dr. Jesionek, treated skin cancers, lupus of the skin, and condyloma with eosin dye with PDT, as reported in their book. This was probably the first human report of PDT. In 1841, a plant dye hematoporphyrin (Hp) showed more clinically satisfactory results and a higher level of biosafety than early photosensitizers (PSs) such as eosin, chinidine, and acridine [1]. In 1955, Samuel Schwartz successfully purified hematoporphyrin derivative (HpD), which shows a higher efficacy for tumors than Hp [1].

The modern era of PDT began in the 1970s in the USA, after the first human report using HpD, later known as Photofrin, as a photosensitizer (PS) to treat skin cancers by Dr. Thomas Dougherty working at Roswell Park Cancer Institute in Buffalo, NY [3]. Today, Photofrin is still the most commonly used PS globally. However, it has many disadvantages, including a long half-life lasting for weeks to months that leads to skin photosensitivity, and a small absorbance peak at 630 nm, making it difficult to penetrate bulky tumors [3]. Since then, several hundred PSs have been developed to improve the efficacy of PDT to tackle cancer and many other diseases and infections.

The advantages of PDT include high selectivity to cancer cells and a high safety profile without long-term side effects. It can also be performed as an outpatient procedure, can be repeated if necessary, is less expensive than other treatments, and can be used as a curative or an adjuvant therapy. However, a successful PDT requires three essential factors, namely a well-designed PS, irradiation with an adequate wavelength covering the absorption peaks of the PS, and sufficient oxygen supply in the tumor microenvironment (TME) [4]. The currently available PSs have different unmet needs for clinical applications, including most, if not all, absorption peaks being within the visible to near-infrared (NIR) wavelength of light, which limits the penetration depth to a few mm of the tissue. Therefore, PDT is only approved for the treatment of superficial and thin tumors [5]. Tumor hypoxia is a common phenomenon in the majority of malignant tumors due to rapid growth of cancer cells, which outgrows the blood supply and eventually leads to tumor resistance to PDT.

Pancreatic cancer is the fourth highest cause of cancer-related death in the United States. The prognosis of pancreatic cancer is extremely poor, with almost all of the patients expected to die from the disease. One of the reasons is that the tumor is usually diagnosed at a late stage because it does not cause symptoms at the early stage. The only curable treatment is surgical resection. Unfortunately, only 15%–20% of patients are candidates for pancreatectomy at diagnosis. Even after a complete resection, the 5-year survival after margin-negative (R0) pancreaticoduodenectomy is approximately 30% for node-negative and 10% for node-positive disease. The global 5-year survival rate for pancreatic cancer patients is approximately 6% [6] despite the advancements in surgical technique, chemotherapy regimens, and the introduction of neo-adjuvant chemoradiotherapy.

Bown et al. initiated the first clinical trial of pancreatic cancer PDT in 2002. Sixteen patients with locally advanced pancreatic cancer were treated with percutaneous ultrasound and computed tomography (CT)-guided interstitial meso-tetrahydroxyphenylchlorin (mTHPC)-PDT with a prolonged median survival of 9.5 months (range 4 to 30, one patient alive at 31 months). Some novel photosensitizers have been developed and are under development to overcome the limitations of pancreatic cancer PDT [7].

Over the last two decades, the study and application of systems and manipulation of matter on the nanometric scale has become a mainstream academic field of interest [8]. Multifunctional nanoparticles (NPs) have been used as drug carriers for better targeting in cancer therapy via the enhanced permeability and retention (EPR) effect, enhancing imaging for diagnosis, additional functions in combination therapy, and their remotely controllable trigger of drug releases [9]. The concept and principle of nanotechnology has been recently utilized to overcome the limitation of PDT [10].

2. The Principle of PDT and Limitations

Figure 1 depicts the mechanism of PDT. A ground state of PS absorbs photons and is transformed into its excited state (PS*), followed by the photophysical pathways of internal conversion and intersystem crossing to the lowest excited singlet state or lowest excited triplet state. These lowest excited states of PS* can directly revert to the ground state by radiation emission. The lowest excited triplet state PS* has a longer lifetime for energy transfer to biological substrates to form reactive oxygen species (ROS) (type I reaction) or electron transfer to oxygen to form the singlet oxygen (1O2) (type II reaction) (Figure 1) [11]. Type II reaction is the major mechanism in PDT in cancer therapy. Nevertheless, the proportion of type I/type II reaction is dependent on the PS used in PDT [5]. 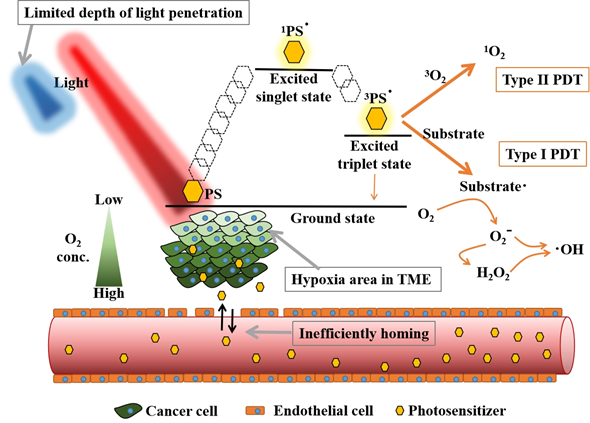 2.2. Limitations of PDT Application in Oncology

An ideal PS should contain some intrinsic features such as minimal toxicity to normal tissue at a therapeutic dose, a properly metabolizable rate from the body, defined accumulation in target cells, activation by a longer wavelength of light, which is usually above 550 nm; and high yield of reactive oxygen species (ROS) after irradiation [1]. A successful PDT treatment requires optimal light energy to destroy tumor cells with sufficient PS distribution and plenty of oxygen in the TME (Figure 1) [12][13][14].

In conventional PDT, visible and near-infrared light are usually used as excitation wavelengths depending on the absorption peaks of a PS. These wavelengths of light penetrate only few mm of the skin (or tumor), which is one of the major drawbacks of PDT in treating a bulky tumor or a tumor inside the body, such as pancreatic cancer [12].

The presence of oxygen in the TME directly affects the ROS generation level in PDT. However, tumor hypoxia is common in solid tumors, especially in the tumor's core [13]. The tumor core contains the cancer stem cells and resistant cancer cells with a lower oxygen and nutrients level due to limited vascular supply. These cells have a poor response to radiation, chemotherapy, and especially to the PDT, which requires oxygen [13]. The low efficacy of PDT in solid tumor treatment causes the resurgence of malignant stem cells [15]. Dose–effect is a vital pharmacokinetic consideration when evaluating the dose-response related to efficacy and toxicity [16]. In designing an ideal PS, it is necessary to consider the intrinsic physicochemical properties, drug internalization to a cancer cell, PS accumulation in the tumor site, lowest effective dose, harmless metabolism pathway, reasonable half-life, and the potential cytotoxicity to normal cells [14].

With the advancement of nanotechnology, the application of PDT in dee[-seated tumors has become possible. New novel NPs can serve as better PS carriers, shift the PS to a higher absorption peak, and work better in a hypoxic TME. Figure 2 shows how NPs can help to improve modern PDT in different ways. In recent years, various nanomaterials with particular properties providing helpful functions have been developed to relieve these limitations of PDT in treating deep-seated tumors in clinical conditions. 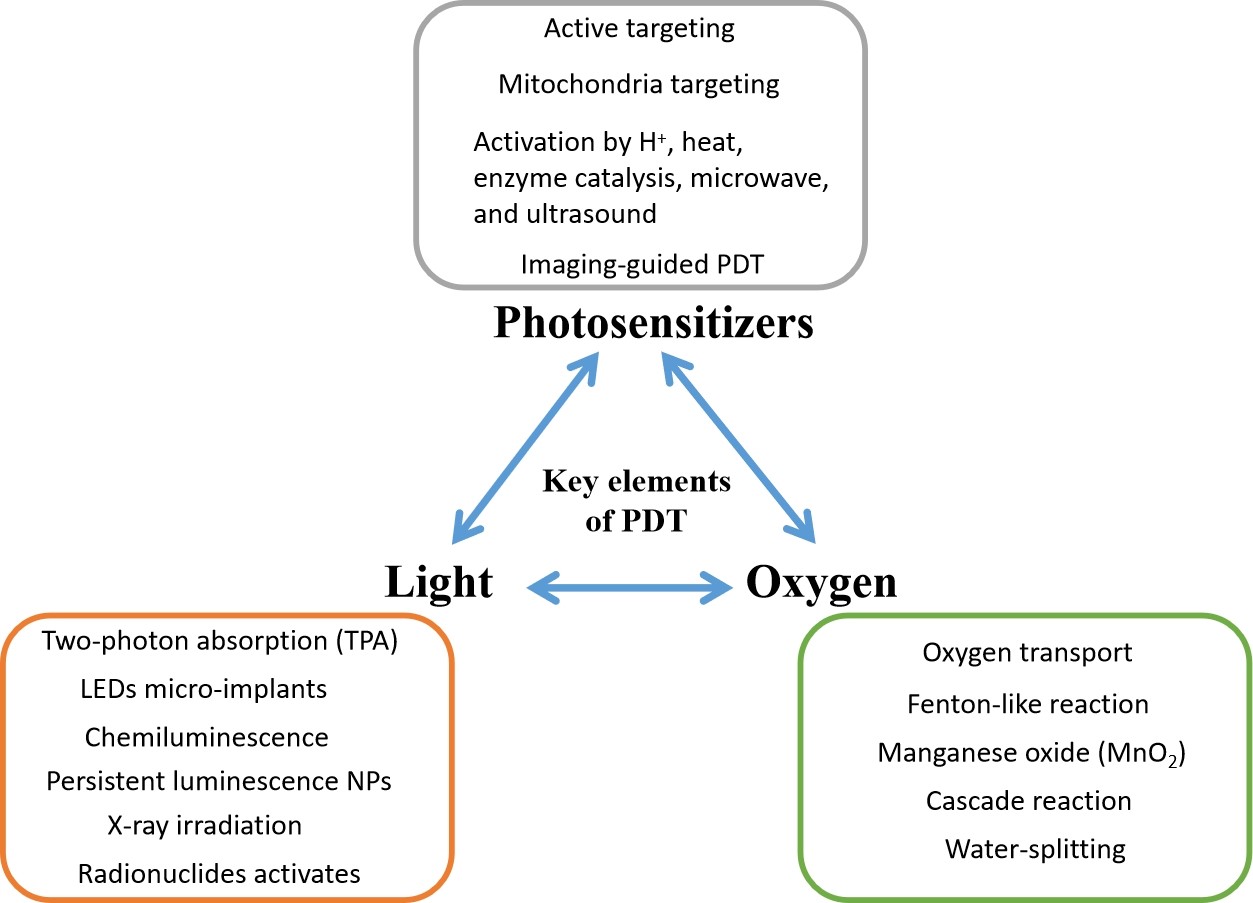