Matrix-assisted laser desorption/ionization (MALDI) has been considered as one of the most powerful analytical tools for mass spectrometry (MS) analysis of large molecular weight compounds such as proteins, nucleic acids, and synthetic polymers thanks to its high sensitivity, high resolution, and compatibility with high-throughput analysis. Despite these advantages, MALDI cannot be applied to MS analysis of small molecular weight compounds (<500 Da) because of the matrix interference in low mass region. Therefore, numerous efforts have been devoted to solving this issue by using metal, semiconductor, and carbon nanomaterials for MALDI time-of-flight MS (MALDI-TOF-MS) analysis instead of organic matrices. Among those nanomaterials, graphene oxide (GO) is of particular interest considering its unique and highly tunable chemical structures composed of the segregated sp2 carbon domains surrounded by sp3 carbon matrix.

Matrix-assisted laser desorption/ionization (MALDI) technique, often combined with time-of-flight mass spectrometry (MALDI-TOF-MS), has been considered as a powerful and essential technique to analyze the intact molecular weight of high-molecular-weight compounds such as proteins [1], nucleic acids [2] and synthetic polymers [3] without their undesired fragmentation. This soft-ionization strategy has significantly contributed to the advances in chemical and biological researches based on its simple analysis process, miniscule sample consumption, high resolution, salt-tolerance, sensitivity and compatibility with high-throughput analysis [4][5]. The detailed mechanism of the MALDI process is still not fully understood, but it has been generally described by serial 3-step processes including laser energy transfer from matrix to analyte in their solid-state mixture upon laser irradiation, ionization by photochemical reaction and isolation of ionized analyte in excess matrix for mass spectrometric analysis [4]. Although MALDI-TOF-MS has been successfully applied to biological and polymer research fields for the molecular weight analysis of high-molecular-weight compounds, it cannot be directly harnessed to analyze low-molecular-weight compounds owing to the severe background interference in the low-mass region from detector saturation and/or photochemical side reactions by organic matrices such as 2,5-dihydroxybenzoic acid (DHB), α-cyano-4-hydroxycinnamic acid (CHCA), sinapic acid, and caffeic acid [6]. For addressing this issue, many efforts have been devoted to the development of an efficient alternative to organic matrices that can be used in matrix-free laser desorption/ionization time-of-flight mass spectrometry (LDI-TOF-MS) [7][8][9]. Metal [10], semiconductor [11][12][13][14], and carbon nanomaterials [15][16][17][18] have been extensively investigated as potential mediators for the LDI-TOF-MS analysis of important low-molecular-weight compounds, including amino acids, saccharides, lipids, organic pollutants, and small peptides. The laser desorption/ionization (LDI) efficiency of those nanomaterials significantly depends on their chemical composition, size and morphology [12][19]. Therefore, development of an efficient nanomaterials-based LDI-TOF-MS platform for the analysis of those small molecules has been of central interest and has attracted much research attention from the material scientists [8]. Based on those efforts, important requirements, such as high surface area, colloidal stability, laser absorption capacity, electrical and thermal conductivity and photo-thermal conversion property, have been revealed to fabricate an efficient platform for LDI-TOF-MS analysis [20][21]. In addition to those colloidal nanomaterials, various nanoporous substrates including porous silicon [22] and titania [23] have also been investigated as a chip-based analytical platform for LDI-TOF-MS analysis of small molecules. Especially, porous silicon substrates are recognized as one of the representative chip-based LDI-TOF-MS platforms because of their excellent LDI efficiency derived from the high surface area, amenable surface and uniform mass signal distribution [24][25]. The efficiency of those nanoporous substrates in LDI-TOF-MS analysis has also been enhanced by surface modification [26][27] and subsequent nanohybridization with other functional nanomaterials [28][29].

Among those various materials, carbon nanomaterials such as graphene [30][31][32][33], mesoporous carbon [34], graphene oxide (GO) [35], carbon nanotube (CNT) [36], and carbon dot (CD) [16][37] have been considered as excellent candidates because they meet most of the requirements as an efficient mediator for LDI-TOF-MS analysis of small molecules. In addition to the general requirements, the carbon materials can provide cost-effectiveness, functionalizable surface and strong affinity to various biomolecules [38] and environmental pollutants [39][40][41]. Especially, GO is a distinct carbon nanomaterial owing to its unique chemical structures composed of small segregated sp2 carbon domain surrounded by sp3 carbon matrix presenting oxygen containing functional groups [42]. Those sp2 carbon structures of GO derivatives play an important role in LDI-TOF-MS analysis by absorbing laser energy and converting it into thermal energy through the electron-phonon interaction for LDI of small molecules [35]. In this regard, Raman spectroscopy is a powerful and essential analytical tool to characterize the ordered and defected sp2 carbon structures of GO derivatives and their nanohybrid structures, which are closely related to their electron-phonon transition and then their efficiency in LDI-TOF-MS analysis [42][43][44]. GO derivatives are a complex family presenting the structural diversity depending on their synthetic and post-treatment processes. The physicochemical properties of GO derivatives greatly affect their behavior in LDI-TOF-MS analysis, and their detailed chemistry has been extensively reviewed elsewhere [45][46][47][48][49][50][51][52]. In addition, GO can be converted into graphene analogues by chemical and thermal reduction treatments for partial removal of oxygen containing functional groups, mainly hydroxyl and epoxy groups. However, there still remains residual oxygen containing functional groups on the reduced GO (RGO) because of the restricted degree of deoxygenation [52]. Thanks to these residual oxygen containing functional groups, GO and RGO derivatives can be hybridized with metal, metal oxide, and semiconductor nanomaterials by covalent and non-covalent surface modifications. The resulting nanohybrid structures can enrich thioloated, phosphorylated and/or aromatic biomolecules such as nucleic acids, amino acids, peptides and proteins through metal-thiol, metal oxide-phosphate and π-π interactions, respectively [53][54][55][56]. Based on those properties, GO and RGO derivatives and their nanohybrid structures have been actively investigated for LDI-TOF-MS analysis and exhibited a strong and versatile potential to analyze various kinds of important small molecules. There are several review articles which deal with the various nanomaterials-based matrices for LDI-TOF-MS analysis of small molecules [19].

Dong et al. [57] reported that graphene can be harnessed as a novel matrix for LDI-TOF-MS analysis of various small molecules, such as amino acids, polyamines, anticancer drugs, nucleosides and steroids, regardless of their polarity. It is noteworthy that the graphene used in this report was actually chemically-RGO flakes. Although the term graphene is only applicable to a single-layer of networked atomic sp2 carbon sheet compacted into a honeycomb lattice, it has been widely misused for RGO and few-layered graphite [58][59]. Therefore, we will use the term “RGO” rather than “graphene” throughout this review because most of the cited literature have utilized RGO for LDI-TOF-MS analysis of small molecules. In the report of Dong et Al., RGO was synthesized by using sodium dodecylbenzene sulfonate (SDBS) as a surfactant to prevent irreversible aggregation of RGO in aqueous media through the van der Waals and π-π interactions between their basal planes [60]. Despite of the surface-adsorbed SDBS on RGO, the resulting RGO exhibited many advantages for LDI-TOF-MS analysis of small molecules such as the high reproducibility, salt tolerance and applicability to the solid-phase extraction of squalene [57]. This report presents the possibility of GO derivatives as an efficient platform for LDI-TOF-MS analysis. However, it is of note that the surfactants on GO derivatives can interfere with the efficient energy transfer to analytes and solid-phase extraction, and thus the follow-up studies are generally excluded to use surfactants to prepare GO derivatives and their nanohybrid structures.

To address this issue, Zhou et al. [61] developed a RGO films-based LDI-TOF-MS platform by sequential fabrication processes including spin-coating of GO and subsequent chemical reduction by using hydrazine vapor. In this case, the RGO sheets were stably immobilized on a solid substrate and thus there was no demand of surfactants for dispersion in solvents. The resulting RGO films showed a higher efficiency and better reproducibility for LDI-TOF-MS analysis of an environmental pollutant, octachlorodibenzo-p-dioxin (OCDD), than the dispersed RGO powder. The limit of detection (LOD) of OCDD was found to be 500 pg with RGO films and the obtained signal was higher than the RGO powder. This difference was attributed to the clean surface of RGO films, and their planar and well-interconnected structures which facilitate the π-π interaction with OCDD, laser energy absorption, and energy transfer to OCDD for LDI-TOF-MS analysis. This report clearly shows that the advantages of chip-based LDI-TOF-MS platform. 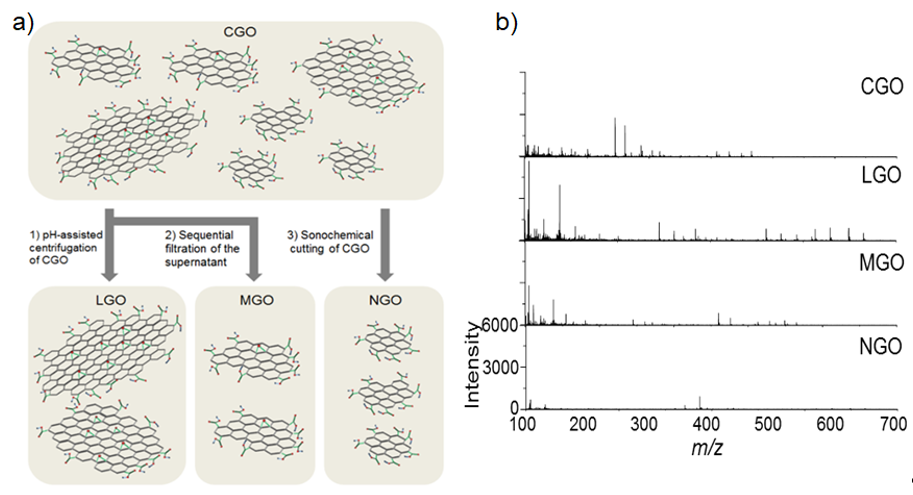 Figure 1. (a) A schematic diagram of size-fractionalization of GO flakes depending on their lateral of dimension. (b) LDI-TOF-MS spectra of small molecules obtained by using size-fractionalized GO flakes. Adapted with permission from ref. [64]. Copyright 2015 Wiley-VCH.

The origin of the fragmentation behavior of GO derivatives in LDI-TOF-MS analysis was further investigated [66][67], as the true structure of GO sheets is debated owing to the recent discovery of highly oxidized species present on their surface [68]. The origin of the fragmentation could be traced to the direct fragmentation of a core graphene-like sheet or the detachment of the surface-adsorbed oxidative debris (OD). To determine the source of fragmentation, a graphene-like sheet and OD were separated from as-synthesized GO (aGO) through a base-washing process (Figure 2a), and the resulting graphene-like sheet (bwGO) and OD were subjected to LDI-TOF-MS analysis under identical conditions (Figure 2b). Comparison of LDI-TOF-MS spectra of bwGO to that of aGO showed that aGO exhibited mass peaks attributed to both pure and oxidized carbon clusters, while bwGO presented much stronger mass peaks solely due to the pure carbon clusters (Figure 2c). These results indicate that the fragmentation of GO sheets originates from both the core graphene-like sheet and the detachment of the surface-adsorbed OD; however, the separation process leads to the partial reduction of these GO sheet constituents.

Figure 2. Schematic diagrams of (a) the separation process of OD and bwGO from aGO by washing with 0.1 M NaOH, and (b) LDI-TOF-MS analysis process of the obtained aGO and bwGO. (c) LDI-TOF-MS spectra of aGO and bwGO, The symbol @ in blue color corresponds to the carbon cluster ions and the symbol # in red color corresponds to the oxidized carbon cluster ions. Adapted from ref. [66] with permission from The Royal Society of Chemistry.

In addition, the influence of OD on the efficiency of LDI-TOF-MS analysis was further investigated by comparing aGO and bwGO. The efficiency of the LDI-TOF-MS analysis of various analytes, was higher with bwGO than with aGO regardless of their chemical structure and molecular weight (Figure 3). The LOD of small molecules with bwGO was determined to be approximately 10 pmol which is lower than that with aGO (100 pmol). This demonstrates that the photo-thermal conversion efficiency of GO derivatives can be enhanced simply by removing the surface-adsorbed OD [67]. 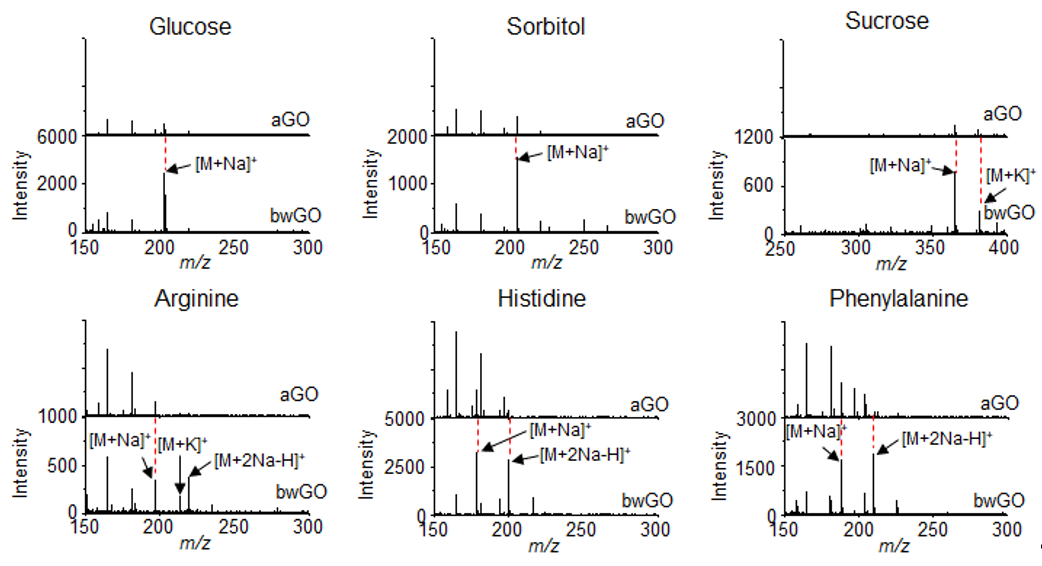 Figure 3. LDI-TOF-MS spectra of small molecules such as glucose, sorbitol, sucrose, arginine, histidine, and phenylalanine obtained with aGO and bwGO. Reproduced with permission from ref. [67]. Copyright (2019) Japan Society for Analytical Chemistry.