Photothermal therapy (PTT) mediated by nanomaterial has become an attractive tumor treatment method due to its obvious advantages. Among various nanomaterials, melanin-like nanoparticles with nature biocompatibility and photothermal conversion properties have attracted more and more attention. Melanin is a natural biological macromolecule widely distributed in the body and displays many fascinating physicochemical properties such as excellent biocompatibility and prominent photothermal conversion ability. Due to the similar properties, Melanin-like nanoparticles have been extensively studied and become promising candidates for clinical application.

Cancer has been a major threat to human public health. According to estimates by the WHO (World Health Organization) in 2015, cancer has become the main cause of death before the age of 70 in 91 countries around the world [1]. Traditional cancer treatment methods such as surgery, radiotherapy and chemotherapy have reduced the burden of cancer to a certain extent, but severe systemic toxicity and multidrug resistance problems force people to seek new treatment methods [2][3]. Nanomaterials-mediated photothermal therapy (PTT) converts the absorbed light energy into heat through the photothermal conversion characteristic of nanocarrier, causing a rapid increase in local temperature. The constant high temperature (42–45 °C) for a certain period of time (15–60 min) will eventually ablates cancer cells. This thermal ablation therapy has become an alternative therapy for some unresectable solid tumors. In addition to the inherent advantages of photothermal therapy, nanomaterials-mediated PTT exhibits many other advantages, for example, it can be controlled in vivo and in vitro [4][5][6]. In vivo, the surface modification of nanoparticles can achieve targeted enrichment of photothermal conversion agents (PTCAs). In vitro, the laser power and near-infrared light (NIR) irradiation position can be controlled artificially. The controllability can reduce system toxicity and protect normal tissues from damage. As early as 2002, laser thermal ablation was reported for recurrent squamous cell carcinoma [7]. Recently, the tumor photoimmunotherapy proposed by Hisataka Kobayashi combines photodynamic therapy with immunotherapy and has entered clinical trials, greatly promoting the clinical translational research of PTT based on PTCAs [8][9][10]. A variety of materials can convert the absorbed near-infrared light into heat (Figure 1). According to the molecular structure, they can be systematically divided into organic and inorganic photothermal conversion materials [11][12][13]. 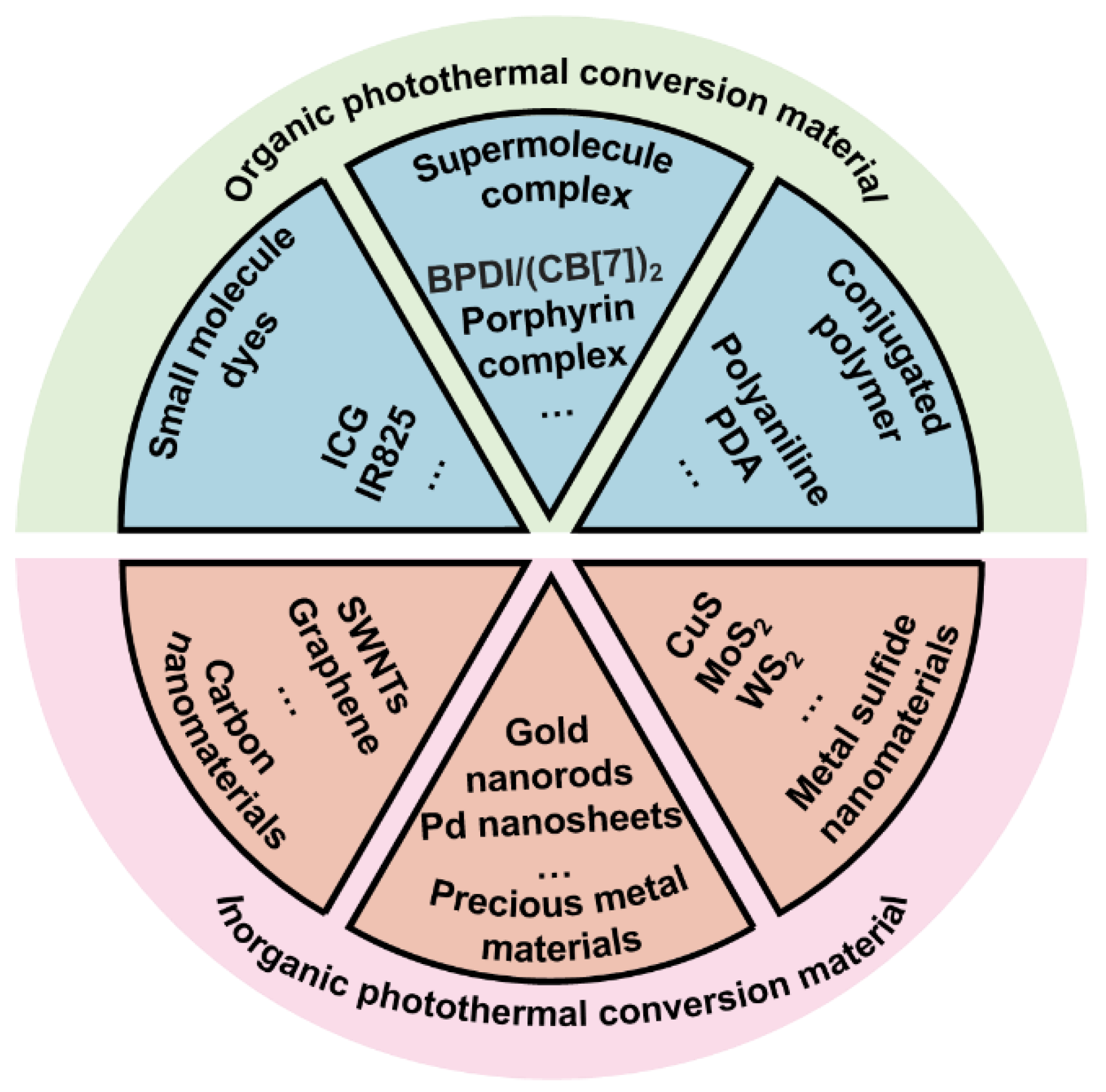 Melanin is a natural polyphenol substance widely distributed in various organism such as hair and skin. It has been confirmed that melanin is formed by dopa and its derivatives through a series of oxidation reactions and coupling polymerization. The main components of melanin include 5,6-dihydroxyindole (DHI) and 5,6-dihydroxyindole-2-carboxylic acid (DHICA). The composition ratio of melanin is not static and it can be divided into dark eumelanin and red pheomelanin according to the absence (eumelanin) of sulfur in the composition or not (pheomelanin) [18][21]. As far as we know, there are no enzymes in the organism that can degrade natural melanin at the molecular level [22][23], but both nature sepia melanin and melanin-like nanoparticles exhibit a hydrogen peroxide-responsive decomposition behavior [20]. Because hydrogen peroxide is widespread in phagocytes, melanin and melanin-like nanoparticles show negligible toxicity in the body [24]. In addition, melanin exhibits many excellent physical and chemical properties including an obvious UV-vis absorption, outstanding photothermal conversion efficiency and other properties that contribute to its function [20]. The prominent features of melanin attract researchers to develop artificial melanin nanoparticles, also called melanin-like nanoparticles (melanin-like NPs). The ways for obtaining melanin-like NPs can be divided into two categories: biological extraction and chemical synthesis (Figure 2) and the two methods have their own advantages. Due to the similar polymerization process, melanin-like NPs retain most of properties of natural melanin and have been widely applied in different fields such as oil/water separation, environmental adsorption and so on [19][25]. In recent years, the applications of melanin-like NPs in biomedicine field have achieved much significant results especially in the field of photothermal anti-tumor therapy. In this review, we first introduced the synthesis methods and internal mechanism of melanin-like NPs, and compared the advantages and disadvantages of different methods for reference. Then, we briefly described the inherent physical and chemical properties of melanin-like NPs including photothermal conversion properties, and systematically summarized their applications in nanomedicine during the past decades which mainly divided into two aspects: (1) biological imaging platform. (2) application of melanin-like NPs in PTT. At the end, this review made a comprehensive summary based on the current research status of melanin-like NPs and objectively discussed related technical challenges and obstacles to clinical transformation. This review will help us have a more comprehensive understanding of research status of melanin-like NPs in the field of photothermal therapy, and contributes to promote the further transformation of melanin-like nanomedicine in clinical applications. 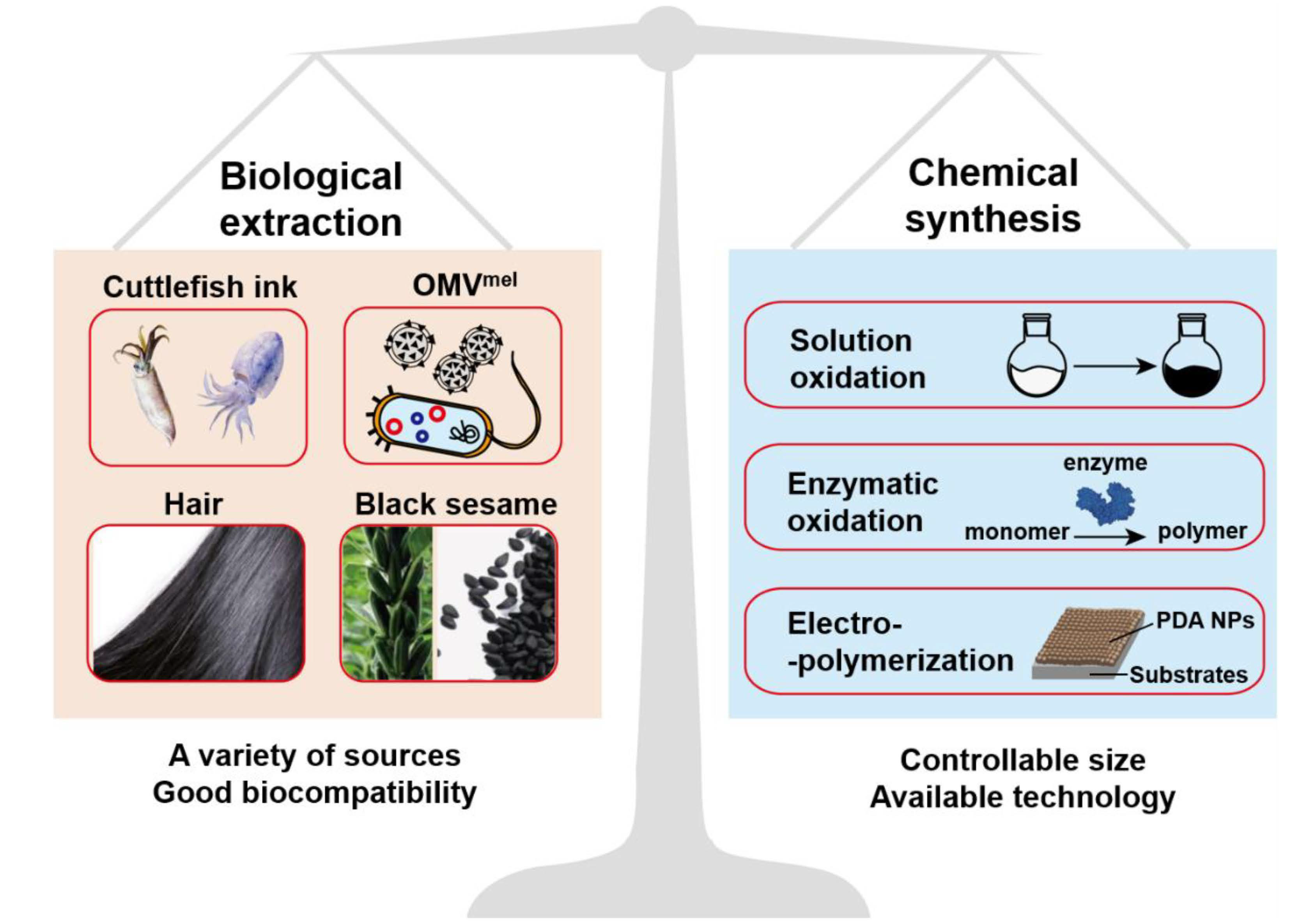 Figure 2. Schematic illustration of the synthesis method of melanin-like NPs.

Melanin-like NPs are superior to many inorganic nanomaterials in the field of nanomedicine due to their own biocompatibility and prominent photothermal properties. And it had been established that PDA NPs with high dose treatment did not show noticeable toxicity in vivo and vitro [24]. Outstanding photothermal conversion ability make melanin-like NPs a more attractive platform for the development of biomedical applications. Here, we focus on their applications in cancer photothermal therapy during the past decade (monotherapy combination therapy and bi-model synergistic therapy) and summarize representative latest research. In addition, this review also introduced other important applications of melanin-like NPs in biomedicine field including biological imaging platform and other diseases treatment (anti-oxidant damage, irradiation protection, etc.).

Due to excellent physicochemical properties, melanin-like NPs have drawn considerable attention in the field of nanoimaging. The inherent photoacoustic imaging (PAI) ability of melanin-like NPs realized high contrast and resolution imaging of tissues which has great application prospects in disease diagnosis and efficacy evaluation. However, some endogenous chromophores such as hemoglobin may cause high background signals [26]. Furthermore, compared with some imaging techniques like PET imaging, PAI shows limited tissue penetration performance. Interestingly, melanin-like NPs can acquire a fluorescent when subjected to severe oxidation conditions and used for intracellular fluorescence imaging (FI). However, FI is limited in intravital imaging due to poor tissue penetration and low sensitivity. Considering the strong metal chelation ability, melanin-like NPs have been exploited for various imaging technologies including magnetic resonance imaging (MRI) and positron emission tomography (PET) to accurately reflect tumor tissue function and metabolism information (Figure 3). In order to obtain complementary diagnostic information, melanin-like NP is also developed for multi-modal imaging in some studies. 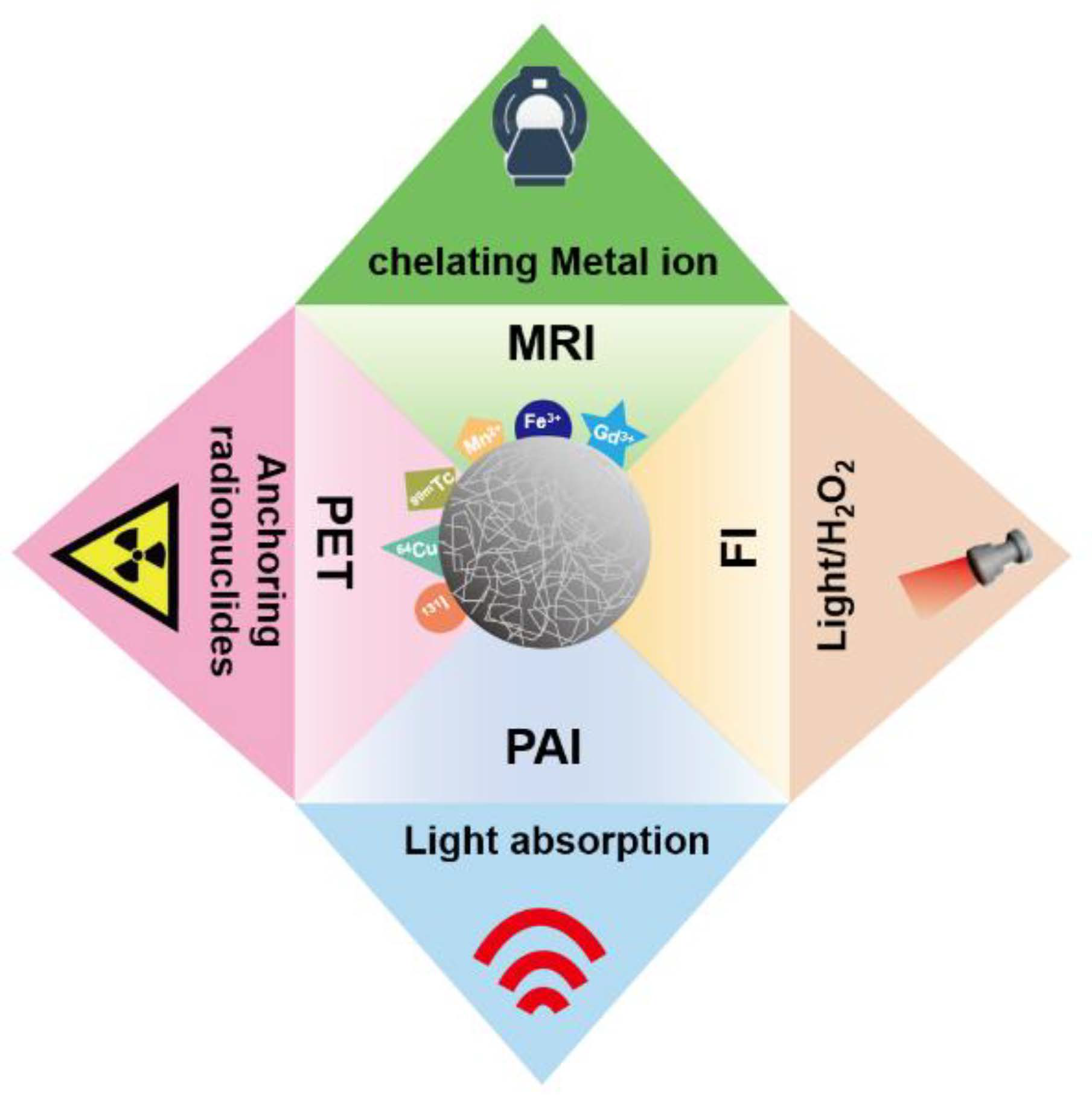 2.2. Application of Melanin-like NPs in PTT

Compared with traditional radiotherapy and chemotherapy, PTT has characteristic advantages in cancer treatment, such as precise controllability of the irradiation site and intensity, better specificity and lower systemic side effects. Considering these outstanding superiorities, PTT has received widespread attention since its proposal [4][6]. Currently, various photothermal conversion agents (PTCAs) with strong NIR absorption including organic and inorganic materials have been developed for tumor photothermal ablation (Figure 1). Despite appreciable success, the long-term safety and effective half-life of existing PTCAs in vivo limit their clinical application. Therefore, excellent biocompatibility and high photothermal efficiency are essential properties of PTCA for clinical applications. Melanin-like NPs are fully meet these two clinical application factors. It is reported that their photothermal conversion efficiency can reach to 40%, higher than that of many reported PTCAs [20][27]. In addition, the abundant groups on the surface of melanin-like NPs contribute to the further functional modifications for enhanced imaging or treatment. Base on the above excellent characteristics, melanin-like NPs have become preferred candidates for clinical PTT. So far, cancer photothermal therapy research based on melanin-like NPs is mainly divided into two aspects: (1) imaging-guided PTT monotherapy, (2) combination therapy strategies including PTT.

2.3. Application of Other Properties of Melanin-Like NPs

Melanin-like NPs play an important role in the treatment of various disease except cancer due to their excellent physical and chemical properties and the following is a brief introduction of some representative applications. Firstly, melanin-like NPs enrich reductive functional groups such catechol and imine which can effectively scavenge multiple reactive oxide species (ROS) in vitro and in vivo [20][28]. Therefore, they are widely used for various disease related to ROS damage such as brain injury in ischemic stroke [29], acute inflammation-induced injury [30], acute kidney injury [31] and periodontal [32]. In addition, melanin-like NPs such as PDA nanoparticles posse excellent adhesive property and metal chelating ability which can be used for antibacterial agents [33][34][35][36]. What’s more, PDA NPs can serve as dopamine replenisher or drug carrier to improve neuroprotective efficiency in Parkinson’s disease (PD) [37][38]. Finally, melanin-like NPs are also involved in other biological applications such as wounding healing and irradiation protection which is a promising multifunctional biological material.