RAB11 isoforms function as membrane organizers connecting the transport of cargoes towards the plasma membrane with the assembly of autophagic precursors and the generation of cellular protrusions. These processes dramatically impact normal cell physiology and their alteration significantly affects the survival, progression and metastatization as well as the accumulation of toxic materials of cancer cells.

To manage pathogenic alterations induced by genetic/epigenetic/transcriptomic changes, cells evolved various strategies to exploit cellular machinery and guarantee their own survival. Specific genetic alterations modify key elements controlling the molecular composition of the cell surface, the assembly of internal organelles and the efficacy of intracellular and extracellular transmission. RAB GTPases are key players in membrane transport events and are fundamental to ensure the efficacy of intracellular logistics[1][2][3].

RAB GTPases are members of the Ras superfamily of monomeric G proteins, a large protein family which includes among its members RAS, RHO–RAC, ARF and RAN as well as the more recently characterized RHEB, RAD and RIT subfamilies[4]. Similarly to other small GTPases, Rab proteins are molecular switches that cycle between an active and an inactive state through the association and the subsequent hydrolysis of guanosine-5′-triphosphate (GTP). In particular, association with GTP is stimulated by Guanine nucleotide exchange factors (GEFs), whereas hydrolysis of GTP to GDP is promoted by GTPase-activating proteins (GAPs)[5]. This activation cycle is pivotal for the binding of multiple effector proteins which mediate the delivery of cellular material to various intracellular compartments such as—the plasma membrane, endosomes, autophagosomes, leading edge of migrating cells, midbodies, primary cilium and centrioles[6]. As a matter of fact, alterations of RAB-mediated trafficking are pivotal in various aspects of both progression and tumorgenicity of cancer cells including the sustainment of proliferative signaling, the evasion of growth suppression, the induction of receptor recycling, the activation of invasion and metastasis as well as the reprogramming of tumor metabolism and the evasion of immune destruction[7][8].

One prominent Rab-mediated transport pathway that cancer cells exploit to adapt their internal states to fluctuations of both their gene expression and microenvironmental status is the RAB11-mediated trafficking pathway. This transport route relies on members of the RAB11 protein family which control the delivery of both proteins and lipids toward several organelles and therefore are involved in many cellular processes (Figure 1A,B). 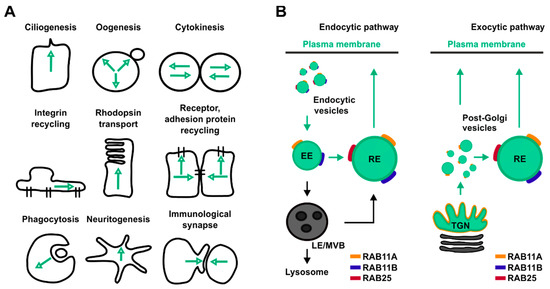 The RAB11 protein family includes three different isoforms named RAB11A, RAB11B and RAB25, each one encoded by a different gene located in a distinct chromosome (Table 1). All RAB11 isoforms are widely distributed in human tissues. In particular, while RAB11A is ubiquitously expressed, both RAB11B and RAB25 are enriched in specific organs (Table 1)[9]. Notably, RAB11 proteins differ in their percentage of sequence identity. While RAB11A and RAB11B share 89% of sequence similarity, the identity between RAB25 with either RAB11A or RAB11B is lower than 70% (Table 1)[10].

Although minimal, such differences in protein sequence identity significantly impact both protein structure and specificity of effector binding, providing an explanation for the different roles of RAB11 isoforms in cells[11][12]. All RAB11 proteins present several post-translational modifications, including prenylation, phosphorylation and ubiquitination. In particular, while prenylation at RAB11 C-termini allows Rab membrane association, both phosphorylation and ubiquitination modulate either activity or degradation of RAB11 isoforms, respectively[9].

RAB11A is the first discovered and best characterized member of the RAB11 subfamily. Homozygous depletion of Rab11a in mice is embryo lethal; whereas the loss of RAB11A protein in neurons does not significantly impact both brain development and functionality. In contrast, depletion of Rab11a in mice intestine increases intracellular accumulation of apical proteins and it induces shortening of microvilli[13][14].

In cells, RAB11A localizes to the recycling endosome (RE) a perinuclear positioned membrane-bound compartment implicated in the control of both proteins and lipids trafficking through and from the RE to the plasma membrane (Figure 1B)[15][16]. In addition, RAB11A mediates transport of vesicular cargoes from peripheral sorting endosomes (SEs) to the RE (Figure 1A)[17]. Furthermore, RAB11A localizes at the trans-Golgi network (TGN), where it controls the transport of material towards both the apical and the basolateral membrane in polarized cells (Figure 1B)[18]. Based on both its wide distribution and functions aimed at mediating the delivery of cellular material to both plasma membrane, endosomes, autophagosome and midbody, RAB11A influences several cellular processes such as cytokinesis, phagocytosis, cell migration and proliferation, immunological synapse assembly, ciliogenesis, influenza virus replication, and autophagy[19][20][21][22][23][24][25].

The RAB11B isoform is highly enriched in the brain and, consistently, homozygous depletion of Rab11b in mice leads to neurological dysfunction (data from International Mouse Phenotyping Consortium, https://www.mousephenotype.org/). Although, RAB11B localizes in both the RE and SE similarly to RAB11A, RAB11B depletion does not alter accumulation of the Transferrin receptor (TfR) at the perinuclear RE whereas downregulation of RAB11A does, thereby indicating a non-overlapping function for these small GTPases in endocytic recycling[26]. In parallel, accumulation of fibroblast growth factor receptor 4 (FGFR4) was observed after downregulation of RAB11B, but not RAB11A[27]. Consistently, RAB11B localizes to an apical pericentrosomal membrane-bound compartment distinct from RAB11A[28]. In this context, recent findings indicate that RAB11A and RAB11B perform opposing roles in the same cells. In particular, RAB11B was found to control recycling of the PAR1 receptor from the endosome to plasma membrane while RAB11A defines the rate of PAR1 degradation by delivering such signaling receptor into the autophagic pathway[29]. Lastly, in polarized epithelial cells, RAB11B specifically mediates the apical transport of the cystic fibrosis transmembrane conductance regulator (CFTR)[30] while it regulates exocytosis in neurons and neuroendocrine cells[31].

RAB25-deficient mice do not exhibit gross pathology[32]. However, when Rab25 depletion is associated with a specific genetic background, as found in 129/J mouse strain, it induces vaginal cancer in virgin females and distal esophageal stricture in both males and females[32]. The localization of RAB25 in cells partially overlap with those of RAB11A (Figure 1B)[33], whereas its role has been associated both in transport of oncogenic signaling receptors and in cellular bioenergetics[9][34].

Through both the presence of various isoforms, the wide distribution amongst distinct cellular compartments and the occurrence of several post-translational mechanisms of regulation, they confer to RAB11 and its trafficking route an elevated level of plasticity. Consequently, RAB11-mediated trafficking pathways provide essential support to various aspects of cellular processes.

In the sections below, we will discuss the implications of RAB11′s role in the planning, implementation and control of the efficient and effective flow and storage of cellular materials, with the aim at understanding the basic principles governing cellular processes underlying tumor progression.

One of the fundamental traits of cancer cells is their ability to sustain chronic proliferation. Growth-promoting signals are tightly regulated in normal cells and they are exploited to instruct cells about both their microenvironment, their duties and their fate. As a consequence, both growth factors, signaling receptors and intracellular signaling cascades are essential to ensure normal tissue homeostasis. Therefore, it is not surprising that by deregulating these signals, cancer cells become independent of extracellular messages that maintain normal tissue homeostasis and thus turn into masters of their own destiny[35].

Typically, binding of extracellular growth factors to surface receptors such as tyrosine kinases provides the key event that induces activation of proliferative signaling cascades in cells. Cancer cells acquire the capability to sustain such a mitogenic response in a number of alternative ways such as inducing autocrine signaling, increasing the number of mitogenic receptors on the cell surface, or extending the mitogenic stimulation by altering the information processing of downstream signaling cascades[36]. RAB11 isoforms were described to influence these processes by controlling the intracellular distribution of cargoes such as growth factor receptors, transmembrane receptors, cell adhesion molecules and signaling lipids[36]. The function of RAB11 isoforms in the cellular logistic implies a role for this small GTPase family in the organization and implementation of operations ensuring the flow of information between distinct cellular districts with spatiotemporal precision. Such procedures direct both the generation, packaging, transportation and stocking of membrane cargoes at the right place and at the right time[5][37]. Therefore, it is conceivable that RAB11 isoforms serve multiple roles impacting various cellular processes when dysfunctional. However, it remains still difficult to predict RAB11 functions in human diseases.

This is exemplified by the dual character of RAB11 isoforms in human cancers. RAB11 isoforms both enhance and diminish cancer progression by functioning either as oncogenes or as tumor suppressors (Table 2, Table 3 and Table 4).

Loss of RAB11 isoforms (i.e., RAB11A and RAB25) is not tumorigenic per se and results in both hyperplasia and dysplasia of colorectal tissues[32][60], whereas their overexpression is not sufficient to transform nontumorigenic/immortalized cells, rather they promote the acquisition of both metastatic and invasive properties in already transformed cells[34][43][51]. Conversely, in cells characterized by a compromised genetic background, alterations in the expression of RAB11 isoforms promote cancer progression. Notably, this occurs both when RAB11 isoforms are downregulated and when they are overexpressed (Table 2, Table 3 and Table 4). As an example, in epithelial cancer cells characterized by loss of either APC or SMAD3 proteins, RAB11 isoforms display a tumor suppressor function promoting both proliferation and aggressiveness of cancer cells when downregulated[32][61]. On the contrary, RAB11 family members show oncogenic potential by promoting proliferation and invasiveness cancer cells when overexpressed[51][62].

Notably, recent evidence suggests that alteration of RAB11 gene expression is part of the adaptive programs that cells exploit to match environmental changes. In particular, RAB11B is up-regulated during adaptation of breast cancer cells to the brain microenvironment, a process that induces the massive modification of the cell surface proteome[43]. Intriguingly, the finding that, in breast cancer, other RAB11 isoforms (i.e., RAB25) are either not altered or epigenetically silenced, strongly support the idea that RAB11 proteins perform non-overlapping functions in cancer [43][63][64].

Despite the fact that these oncogenic phenotypes have been mechanistically linked to an alteration in both proliferative and migratory cellular capacity through either recycling of receptor tyrosine kinases, E-Cadherin, α5β1 Integrins, or to activation of oncogenic signaling and metabolic stress, the molecular underpinnings of these tumorigenic events are still poorly understood[33][34][51][65][66][67][68]. However, we are still struggling to understand how RAB11-mediated trafficking is orchestrated, the evidence that RAB11 acts in concert with an elevated number of effectors and interactors, to ensure the fidelity of intracellular trafficking, provides a novel framework that allows to interpret RAB11-induced cellular dysfunction.

An elevated number of reports confirms the significance of the RAB11-mediated trafficking pathway in transport of pro-tumorigenic signaling receptors to cell surface. In particular, RAB11A as well as RAB11B and RAB25 enhance receptor recycling to the cell surface, and, they concomitantly decrease degradation in cytoplasm[12][43][61]. As a consequence, RAB11-mediated trafficking supports both the amplification and duration of signaling cascades by increasing receptor half-life in the plasma membrane. In addition, the directional flux of membrane cargoes from internal organelles towards the cell surface promotes directional cell migration of cancer cells and therefore their ability to invade healthy tissue and metastasize to distant sites. Accordingly, RAB11 proteins were found to recycle β1-Integrin to the plasma membrane[32][43] and in parallel their depletion blocks receptors inside cells for a longer time, with major consequences in terms of amplification of oncogenic signaling cascades[43][69][70].

However, the evidence that RAB11 isoforms function both as oncogenes and tumor suppressors challenges this view, raising the possibility that in some cellular contexts, such as in the presence of massive alteration in both signaling and metabolic pathways, RAB11 might misdirect cargoes assigned to the cell surface to a different destination.

In this context, the analysis of both specific and overlapping RAB11 roles might provide novel insights into mechanisms controlling intracellular accumulation of surface proteins. As an example, RAB11A and RAB11B perform divergent roles in the regulation of PAR1 receptor trafficking by controlling either its degradation or its recycling, respectively. In the absence of RAB11B-mediated recycling, the PAR1 receptor is trafficked to autophagic organelles for degradation, a process that requires RAB11A. Accordingly, RAB11A knockdown restores PAR1 expression in silenced RAB11B cells[29].