Russia and South Africa are the world’s leading producers of platinum group elements (PGEs). This places them in a unique position regarding the supply of these two key industrial commodities. The purpose of this paper is to provide a comparative high-level overview of aspects of the geological occurrence, mineralogy, and processing by flotation of the platinum group minerals (PGMs) found in each country. A summary of some of the major challenges faced in each country in terms of the concentration of the ores by flotation is presented alongside the opportunities that exist to increase the production of the respective metals. These include the more efficient recovery of minerals such as arsenides and tellurides, the management of siliceous gangue and chromite in the processing of these ores, and, especially in Russia, the development of novel processing routes to recover PGEs from relatively low grade ores occurring in dunites, black shale ores and in vanadium-iron-titanium-sulphide oxide formations.

It is well known that Russia and South Africa are the major producers of platinum group metals and hold the world’s largest reserves of minerals bearing these metals. Cawthorn [1] has estimated that South Africa has reserves and resources of platinum group elements (PGEs) of about 85,000 metric tons. In Russia, Norilsk alone has Pt and Pd reserves of about 2500 metric tons [2]. Platinum group metals or elements commonly refer to ruthenium, rhodium, palladium, osmium, iridium, and platinum and will be referred to as PGEs in the present paper. These metals are present in a very wide range of platinum group minerals, which will be referred to as PGMs. Table 1 shows the 2018 production figures for platinum, palladium, and rhodium illustrating the dominant global position held by these two countries. Together, they produce 84% of the world’s total production of platinum and 65% of the total gross demand. The equivalent figures for palladium are 78% and 53%, and for rhodium, they are 87% and 61%, respectively [3].

Recently, there has been a decrease in the demand for platinum, which is ascribed to the decline in its use as an autocatalyst. Palladium, on the other hand, is the preferred component in exhaust catalysts for gasoline engines and is currently in great demand. In this context, it is interesting to note the LME (London Metal Exchange) price trends for these two metals over the past three decades. In the 1990s, palladium prices were ≈USD100/oz and platinum ≈USD400/oz, whereas in 2020, palladium prices had increased almost 20-fold to ≈USD 2000/oz, and platinum only doubled to ≈USD 800/oz. Although the demand for rhodium is much less than that for Pt or Pd, its 2020 price of almost USD7000/oz makes it an economically attractive product for companies processing PGMs.

2. Geological Occurrence and Mineralogy of the Ore Bodies

In South Africa, the PGM-bearing ores are found in the Bushveld Complex, which contains extremely rich reserves of these minerals. The Bushveld Complex is located in the north of the country and is mainly characterised by what are known as the eastern, northern, and western limbs. Figure 1 shows the geographical location of the various limbs. Generally, the western limb operations are mostly underground, whereas the eastern and northern limb, which contain the Platreef ore body, are often open pit. In addition to being generally safer, open pit operations are considered to be more economical than underground mining due to less auxiliary costs involved such as ventilation and rock support and less complex and expensive techniques required for material movement [4].

Figure 1. Geological map of the Bushveld complex showing the geographical location of the western, eastern, and northern limbs [5]. 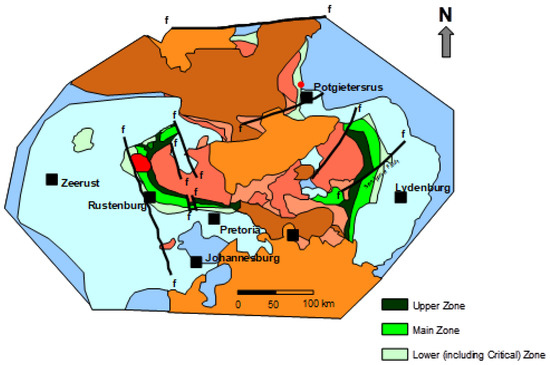 The Merensky Reef is generally regarded as a uniform reef type. However, large variations occur in reef thickness, reef composition, as well the position of the mineralisation. The reef comprises approximately equal amounts of dark iron–magnesium silicate minerals (feldspathic pyroxenite) and lighter calcium-aluminium-sodium silicate minerals under- and overlain by thin (5 to 15mm) often discontinuous layers of chromite concentrations. The Merensky pegmatoid Zone contains the base metal sulphide grains and associated PGMs. The Merensky Reef consists predominantly of orthopyroxene (≈60%), plagioclase feldspar (≈20%), pyroxene (≈15%), phlogopite (≈5%), and occasional olivine. Secondary minerals such as talc, serpentine, chlorite, and magnetite have widespread occurrence. The base metal sulphides consist predominantly of pyrrhotite (≈40%), pentlandite (≈30%), and chalcopyrite (≈15%). The major PGMs are cooperite (PtS), braggite ((Pt,Pd)NiS), sperrylite (PtAs2), and PGE alloys. In some areas, minerals such as laurite (RuS2) can be abundant. Typical grades in the Merensky Reef are about 3–8 g/t [6].

The UG2 Reef is a platiniferous chromitite layer which, depending on the geographic location within the complex, is developed some 20 to 400 m below the Merensky Reef. The UG2 consists predominantly of chromite with lesser silicate minerals (5–30% pyroxene and 1–10% plagioclase). Other minerals present in minor concentrations can include silicates, oxides, and base metal sulphides. Secondary minerals include quartz, serpentine, and talc. The Cr2O3 content of the UG2 Reef varies from 30 to 55%. Total PGE grades vary by locality, but on average, they range between 4 and 7 g/t. The PGMs present in the UG2 Reef are highly variable, but generally, the UG2 is characterised by the abundant PGE sulphides, viz. laurite (RuS2), cooperite (PtS), braggite ((Pt,Pd)NiS), and an unnamed PtRhCuS. The base metal distribution follows a similar trend to that of the PGEs with most of the values occurring in the bottom and top part of the reef. The base metal sulphides of a typical UG2 Reef consist predominantly of chalcopyrite, pentlandite, and pyrrhotite, containing 200–300 ppm Ni and <200 ppm copper [6].

The Platreef is located in the northern limb of the Bushveld Complex, north of Mokopane in South Africa. This reef consists of a complex assemblage of rock types, with pyroxenites, serpentinites, and calc-silicates being the most abundant. Base metal mineralisation and PGE concentrations are found to be highly irregular, both in value as well as in distribution. The northern limb is partially covered by younger Waterberg-aged rocks, with exposures confined to the eastern edge of the limb near Mokopane and in the north near Villa Nora. A variably mineralised (PGE, Cu, Ni) composite pyroxenite zone forms the eastern floor contact of the Mokopane limb and is regarded as the local equivalent of the Merensky reef. This pyroxenite zone has been termed the Platreef and has been traced for 35 km along the eastern contact, where it transgresses from the Transvaal Supergroup sedimentary rocks in the south to Archaen granite and gneiss in the north. The predominant PGMs in the mined area of the Platreef are the PGE tellurides, alloys, arsenides, and sulphides. Typical PGE grades are 2–5 g/t. The Pt and Pd tellurides contribute between 30 and 40% of the PGMs present in the Platreef ore followed by the alloys (26%), arsenides (21%), and sulphides (19%) [6].

Table 2 and Figure 3 summarise the distribution of various major platinum group and gangue minerals and in the different South African ore bodies. A more detailed analysis of these minerals and their characteristics can be found in Engelbrecht [9].

PGE production in Russia is dominated by palladium, largely occurring in the sulphide Cu-Ni ores of the Norilsk district and the Kola Peninsula, which together account for almost the entire resources being mined. In order to provide a geographical context, Figure 4 shows the location of many of the major PGM mining districts in Russia and Table 3 shows the approximate location of a number of the deposits and mining operations referred to in this paper.

Figure 4. Map showing many of the important PGM mining operations in Russia.

Table 3. Approximate geographical location of a selection of deposits referred to in this paper (all deposits shown are currently being mined except for those indicated by an *).

In massive sulphide ores, the concentration of PGEs varies depending on the mineral type and composition [11]. The Norilsk platinum-copper-nickel deposit forms the second largest concentration of PGEs in the world after the Bushveld Complex, in which, unlike the latter, palladium prevails over platinum and, as in the Bushveld complex, rare PGEs such as rhodium (Table 1) are in significantly lower concentration relative to palladium and platinum [12]. The Norilsk copper-nickel sulphide ores are characterised by high contents of PGEs, making the Norilsk Combine the country’s largest revenue generator in the mining sector [13]. This Norilsk Cu-Ni sulphide deposit is the third largest in the world after the Canadian Sudbury and the Chinese Zhenchuan deposits. In contrast to ores of Cu-Ni sulphide deposits associated with komatiites such as in Kambalda, Australia, the Cu/Ni ratio in Norilsk generally can be as high as 2.5 in the Upper Talnakhskoye deposit [14][15].

In disseminated ores such as those occurring at the Norilsk Processing Plant, a significant amount of palladium (90–95%) is present in pentlandite, in which the palladium grade ranges from 50 to 1000 g/t, whereas in pyrrhotite and chalcopyrite, the palladium grade is as low as <0.1 g/t. In pyrrhotite and pentlandite contained in disseminated ores, the grade of platinum is < ≈1.2 g/t. However, in the Oktyabrskoye mine of Norilsk, the Pt and Pd grades in the pentlandite can be as high as 71 g/t and 265 g/t, respectively.

Dodin et al. [13] have comprehensively reviewed the geology of PGEs in Russia. Table 4 shows the dominant minerals in which the PGMs occur in the major deposits in Russia.

Table 5 summarises the occurrence of the various PGEs in the different minerals/ores.

Apart from the current mining operations, there is the possibility that an increase in platinum production in Russia could occur in the future through the processing of non-conventional platinum-containing sources, which include ores with platinum-type mineralisation associated with zonal basic and ultrabasic bodies. Such deposits occur in the Ural, Aldan, and Kamchatka regions as well as in the carbonic (black-shale) layers of Russia’s Far East region and the vanadium–ferrous–titanium oxidised-sulphide formations found in Karelia in the northwest of Russia. It is estimated that the Norilsk and Pechenga (northwest Russia) ore districts together could eventually become the largest source of platinum production in Russia.

Some illustrative structural diagrams of the platinum mineral deposits within the Baltic Shield and the platinum-metallogenic map of the northern part of the Urals are shown in Figure 5a,b.

The main opportunities and challenges in Russia are related to the treatment of new sources of PGMs and the development of environmentally friendly grinding, gravity concentration, and flotation processes required depending on the varying mineralogical composition. In dunite, which is an igneous plutonic rock of ultrabasic composition, more than 90% consists of olivine with an admixture of chromite. Large-scale ore deposits of previously mined platinum-containing dunites were deposited on the Kamchatka’s north side at the end of the 20th century, and these have an average grade 0.7–3.2 g/t Pt. There is currently considerable interest in developing these deposits, and mineralogical–geochemical studies have indicated that low grades of platinum are found in the <80 µm grain size. The most important feature of this mineralisation is the presence of platinum in free mineral forms, 85% of which are platinum-iron alloys with minor amounts of sperrylite (10%), platinum-copper alloys (4%), and other PGE minerals (1%). The material is amenable to gravity concentration without preliminary separation of chromite concentrate, and it is proposed that maximum platinum extraction can be achieved by two-stage grinding with sequential separation into gravity concentrates. It has been proposed that at an average platinum head grade in dunites of 1.21 g/t, more than 86 wt % of platinum can be extracted by gravity concentration, from which most can be isolated in concentrates with platinum grades of more than 1 kg/t.