Gluten is the nitrogen storage protein matrix found in wheat and cereals belonging to the Triticeae tribe, and it is composed of two proteins: gliadin and glutenin.

Approximately one out of one hundred people suffer from some celiac disease symptoms, an enteropathy caused by the consumption of specific peptide sequences in dietary gluten by people sensitive to its protein composition and whose only treatment is the absence of the protein from the diet [1][2][3]. Gluten is the nitrogen storage protein matrix found in wheat and cereals belonging to the Triticeae tribe, and it is composed of two proteins: gliadin and glutenin (shown in Figure 1) [4][5]. This protein complex is essential during the breadmaking process since the gluten matrix is responsible for retaining carbon dioxide during fermentation and the final volume of the product [6][7]. The global market size for gluten-free products during 2019 was estimated at USD 21.6 billion and is expected to increase at a compound annual growth rate (CAGR) of 9.2% from 2020 to 2027 [8]. Because of this increase in demand and the rising prevalence of celiac disease and Irritable Bowel Syndrome (IBS), the use of substitutes for the preparation of gluten-free baking products has been studied [8][9].

For a product to be considered gluten-free, the protein concentration must not exceed the value established by the corresponding government regulatory agencies; if this value is not low enough, it is considered a very-low gluten product containing a maximum of 100 mg/kg [11][12]. A product can be labeled gluten-free in the United States and Europe if it contains less than 20 mg/kg of gluten [13][14]. In other countries such as Mexico, a gluten-free product can be labeled as such, as long as the protein complex is removed and the total content of nitrogen does not exceed 500 mg/kg, expressed in dry matter [15]. Because of this low or null concentration of gluten, gluten-free bread cannot reproduce the properties seen in its unsubstituted counterparts, which translates to lower quality products.

Like maize, sorghum, and rice, gluten-free cereals do not form a viscoelastic gluten matrix and thus cannot entrap gas during the breadmaking process, producing low-quality products. The nutritional quality of cereal’s prolamins is considered low due to the lack of lysine and poor protein content (9–16% compared to 17–22% in gluten products) [16][17]. To make up for the absence of gluten matrix, the use of additives on gluten-free cereal doughs (formulation based on starch) and the modification of its protein content have been tested to create higher quality foods [6][18][19]. While both methods have yielded positive results, protein modifications can be preferred because of their stronger networks, barrier properties, and higher nutritional value than carbohydrate sources, like in the case of starch-based formulations [20][21]. These protein modifications have been classified as chemical, enzymatic, thermo-mechanical (also called physical), and in some cases, even genetic [22]. These classifications are defined and explained in Section 3 of this review. Studies focusing on proteins extracted from non-cereal sources have been made, such as in the case of β-conglycinin from soybeans; however, because this review focuses on cereal-based proteins, they will not be mentioned [23].

The potential that a gluten-free formulation has after modifying its protein content can be understood by studying the rheological behavior (strength and elasticity), thermal, and textural properties of the product [24]. These functional properties are affected by the stability and behavior of the protein content, which is why modifications can be made mainly to optimize dough handling properties, bread volume, and internal crumb texture [25]. Gluten-free cereals present lower functional values, especially in dough rheology compared to wheat gluten dough, which is why modifications focus on improving protein functionality.

2. Cereals and Pseudocereals as the Protein Source in Bread-Making

The breadmaking process is commonly divided into three steps: mixing, fermentation, and baking [6][26]. As the name suggests, the mixing process is the step where all the ingredients for the dough are incorporated in order to develop a protein network; this is achieved by the kneading and hydration of gliadin and glutelin, which will form the continuous gluten network via covalent (disulfide bonds), non-covalent (hydrophobic), and hydrogen bonding interactions [27][28][29]. The dough mixing step is critically important because the mechanical work should be stopped when the gluten achieves its maximum strength, under or overmixed dough commonly yield low-quality bread, especially in terms of bread volume and crumb texture [30]. During the fermentation process, the yeast added in the mixing phase will ferment glucose, fructose, maltose, sucrose, and maltotriose, producing carbon dioxide (CO2) and ethanol; the CO2 will be trapped and retained by the gluten matrix, making the dough rise [4][7][31]. In gluten-free doughs, the replacement of gliadin with another prolamin would prevent the formation of the elastic network diminishing dough expansion. The final step in the breadmaking process will further enhance the gas expansion until cell rupture, thanks to the higher gas pressure induced by the increase in temperature, giving way to the bread’s final volume and appearance [32].

Wheat gluten is needed to achieve some final properties of dough and bread, such as viscosity, extensibility, and elasticity [33]. Therefore, the formulation of gluten-free bread is challenging since the protein content of other cereal sources do not exert these relevant rheological dough properties, resulting in products with insufficient rheological and baking properties [30]. Instead of presenting gliadin in their structure, gluten-free cereals contain other prolamins, which are the family of proteins to which gluten belongs.They are alcohol soluble storage proteins found in the endosperm of cereals and specific to different types of cereals but do not produce (after digestion) the alpha-gliadin peptide composed of 33 amino acids related to the celiac disease [9].

Prolamins from gluten-free cereals have been used in breadmaking processes with varying results; however, the consensus is that they yield poor quality bread, with low specific volume, crumb softness, and higher staling rates [34]. Zein, the maize prolamin, has been one of the most widely studied proteins for the substitution of gluten and can be classified into α, β, γ, and δ fractions, of which approximately 70% of the protein content represents α-zein, a hydrophobic fraction rich in glutamine residues that makes corn flours challenging to hydrate [35][36][37]. Another factor that contributes to the poor performance of zein is that, unlike other proteins in cereals, which are present in the matrix, zein is encapsulated in protein bodies (see Figure 2); this makes it unable to interact with other components in the dough during mixing and will not create a network for gas retention and expansion [38].

Another prolamin studied for gluten substitution has been kafirin from sorghum, which shares some similarities with maize prolamins. Like zeins, kafirins are located inside of spherical protein bodies surrounded by starch granules in the glutelin matrix, which, as discussed above, limit their network forming capabilities [22][40][41]. Other similarities include their classification into α, β, γ, and δ fractions, and the predominance of α fraction (80–84% of prolamin), which is also rich in glutamine and non-polar amino acids (alanine, leucine, and proline) [40][42]. Compared to zeins, kafirins are more hydrophobic (12.5% increase in hydration energy), a quality bestowed by the extensive disulfide bonding of cysteine residues in its composition; providing water vapor and gas retention properties to films made from this protein but also bringing unwanted rigidity and stiffness to the product [38][40][42][43].

Prolamins are not the only major storage proteins found in the endosperm of cereals. In rice, its storage protein content is mainly constituted of globulins and not its prolamin, orizein [9][44]. Globulins are protein fractions soluble in salt solutions and present a more globular structure than prolamins (Figure 3), where the globulin subunits comparatively form a more spherical shape [45][46][47]. Unlike zein and kafirin, rice proteins have not been classified in the same fractions; they are distinguished by their molecular weight and attributed to the globulins 11–12S families representing 70–80% of its total protein content in their endosperm, which is rich in glutamic acid, aspartic acid and arginine (non-essential amino acids) [48][49]. Studies for rice have shown that the degradation of the protein matrix of rice is beneficial for the formation of gluten-free doughs with no detrimental effects; this is because starch is the main structural component of gluten-free bread and the absence of protein gives it improved continuity and better batter properties [6][50]. 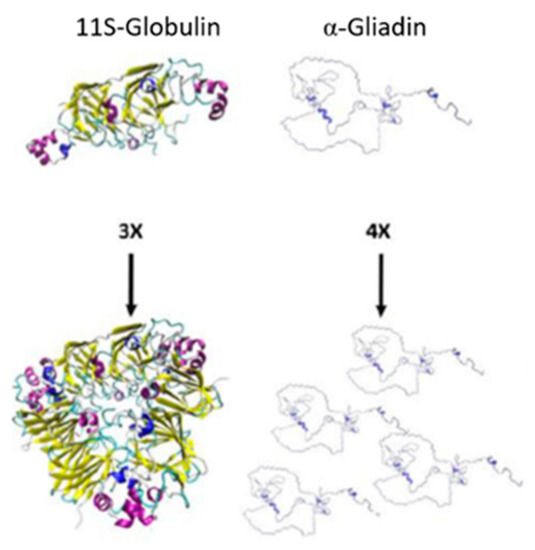 Figure 3. Subunits and polymers of 11S-globulin in pea and α-gliadin in wheat. 3× and 4× indicate the number of subunits shown. Adapted from Rasheed et al. [47].

Most pseudocereals used in breadmaking are dicots, and like rice, they are rich in starch and have protein constitutions predominated by globulins [51][52]. Compared to cereals, pseudocereals have larger protein-rich quantities in arginine, tryptophan, lysine, and histidine, and 7S and 11S globulins in their constitution [53]. Due to their higher protein quantity compared to cereals, pseudocereals such as amaranth, quinoa, and buckwheat have been used in gluten-free bread to improve shelf-life by adding their flours to the dough [54]. Table 1 summarizes the protein composition of cereals and pseudocereals commonly used in gluten substitution studies. These sources lack gliadin as a storage protein, and the major non-polar compositions for these grains have hindered their inclusion in bread formulations.

Table 1. Protein content and composition of cereals and pseudocereals used in recent works for gluten substitution in bread.