Transforming growth factor-beta (TGFβ) was discovered more than thirty years ago as a secreted polypeptide from sarcoma virus-infected cells that promoted the soft agar independent growth of normal rat kidney (NRK) cells [1][2]. This biological property was associated with oncogenes, hence the name transforming growth factor. However, studies shortly thereafter discovered that this effect of TGFβ (unlike the effect of oncogenes) was reversible, and that TGFβ can have potent cell growth inhibitory effects [3]. Thirty-three human genes encoding distinct but closely structurally and functionally related TGFβ family members have been identified, which includes TGFβ1,-β2 and -β3, activins, inhibins, bone morphogenetic proteins (BMPs), myostatin, nodal and the mullerian inhibitory substance (MIS) [4][5][6]. The active TGFβ molecule is a dimer stabilized by hydrophobic interactions and a disulfide bond [7]. Following the binding of TGFβ to its specific receptors that are expressed on nearly all cell types, TGFβ regulates a plethora of biological processes, ranging from cell proliferation and differentiation, embryogenesis, hormonal synthesis and secretion, immunity to tissue remodeling and repair [6][8]. Because of its ability to induce cell growth inhibition and apoptosis in normal and pre-malignant cells, TGFβ has been described as a potent tumor suppressor [8][9]. In support of this notion, mutations in the components of the TGFβ signaling cascade have been identified in a number of human cancers, including hereditary nonpolyposis colon cancer, hepatocellular carcinoma (HCC), and pancreatic and ovarian cancer [10]. In contrast to this activity, TGFβ can also function as a tumor promoter by promoting cancer cell proliferation, stimulating epithelial-to-mesenchymal transition (EMT) and migration of cancer cells, and indirectly by acting on the tumor microenvironment, promoting angiogenesis, and/or immune evasion in advanced stages of tumor progression [8][9]. Active TGFβ induces the heteromeric complex formation of two single transmembrane serine/threonine kinase family receptors, i.e., TGFβ type I and type II receptor (TβRI and TβRII, respectively) [11][12]. Two molecules of TβRII associate with two TβRIs molecules thereby forming a tetrameric receptor complex [13][14]. Upon ligand-induced complex formation, the TβRII’s constitutively active kinase phosphorylates TβRI [also termed activin receptor-like kinase-5 (ALK5)] on serine and threonine residues in the juxta membrane glycine-serine residue-rich (GS) domain [15][16]. TβRI acts downstream of TβRII, and is the main component of the receptor complex that triggers various downstream signaling activities [17]. The signal is relayed from the receptors to the nucleus via cytoplasmic effector molecules, a process called SMAD and non-SMAD signaling [18][19].The action of TGFβ is highly context dependent and is subject to positive and negative regulation in each step of the signaling pathway [6][20]. This is needed to enable spatio-temporal control and allow for crosstalk with other signaling pathways [21]. An important mechanism by which the expression, localization, and activity of TGFβ signaling components is controlled is by post-translational modification (PTMs). For example, PTMs that occur in receptors and SMAD proteins include phosphorylation, ubiquitination, sumoylation, ribosylation, and acetylation [22][23][24][25][26][27][28][29]. In particular, ubiquitination is emerging as a key regulatory mechanism by which intracellular signaling intensity, duration, and specificity is reversibly controlled through the action of multiple E3 ubiquitin ligases and deubiquitinating enzymes [30][31][32]. A concept is emerging that disruption of the ubiquitin modification and function of TGFβ pathway components may result in illicit protein activity leading towards human diseases including cancer.

In normal (healthy) and premalignant cells, the TGFβ signaling pathway prompts a tumor suppressive role. However, in advanced metastatic tumors, this pathway can be blunted or corrupted or even utilized by cancer cells to promote oncogenic functions [9][61] (Figure 2).

TGFβ induces cell cycle arrest in G1 phase by inducing the expression of cell cycle inhibitory proteins, like cyclin-dependent kinase inhibitors (CDKIs) p15INK4B and/or p21KIP1, which in turn inhibit specific CDK functions [62][63]. TGFβ also represses the expression of growth inducing factors such as the oncogene c-MYC, and the ID family of transcription factors (ID1, ID2, and ID3), which also results in inhibition of cell proliferation [64][65][66][67]. Another anti-tumor function of TGFβ is its role in promoting apoptosis (Figure 2). In hepatocytes and B-lymphocytes, TGFβ promotes SMAD and the p38 MAPK-dependent transcriptional induction of the pro-apoptotic Bcl-2 family members BMF and BIM. These in turn induce the pro-apoptotic factor BAX, which leads to mitochondrial release of Cytochrome C and increase in caspase-dependent apoptosis [68][69]. Similarly, TGFβ signaling is known to repress BCL-XL and anti-apoptotic BCL-2 family members leading to promotion of apoptosis [70][71][72]. In liver, TGFβ promotes the expression of pro-apoptotic protein, death-associated protein kinase (DAPK), in a SMAD dependent manner [73] (Figure 2).

In mice models, TGFβ has been found to regulate genomic stability [74][75][76] (Figure 2). Knockout of TβR1inhibited the phosphorylation of ataxia-telangiectasia mutated (ATM), p53, CHK2, and RAD17, which increased the radiation-sensitivity of cells derived from knockout mice compared to normal mice [77]. Similarly, SMAD4 conditional knockout mice with head and neck cancer, revealed a role for SMAD4 in the regulation of the Fanconi anemia/BRCA DNA repair pathway, also suggesting an involvement in genomic stability [78]. The same study demonstrated a correlation of SMAD4 knockdown with the downregulation of BRCA1 and RAD51 protein expression in head and neck squamous cell carcinoma (HNSCC) as well as increased expression of TβR1 and phospho-SMAD3 [78]. The exact mechanism of this regulation remains to be determined.

Mutation or functional inactivation of TGFβ receptors or downstream SMAD proteins have been associated with progression of malignancies [79], as it mitigates the TGFβ/SMAD-induced cytostatic responses, and leads to cell hyperproliferation. In particular, TβRI, TβRII, SMAD2, and SMAD4 are frequently mutated, deleted, or attenuated (gene/loss of heterozygosity/expression) in certain cancer subtypes. Inactivating mutations or deletions of genes encoding TGFβ receptors and SMADs are common in esophageal, colorectal, and pancreatic adenocarcinomas. SMAD4 inactivating mutations are common in gastric, colorectal, and pancreatic adenocarcinomas, whereas up to 20% of head and neck, bladder, cervical, and lung squamous carcinomas contain inactivating mutations in TGFβ signaling components like SMAD2, SMAD3, SMAD4, TβR1, or TβRII [8].

In late stages of cancer, TGFβ signaling can switch towards a tumor promoting function through diverse mechanisms (Figure 2). In the following section, we discuss the pro-oncogenic role of TGFβ signaling with a few examples. The following roles are specifically true for cases where SMADs or receptors are not functionally inactivated by mutations. The pro-oncogenic responses of TGFβ can be broadly classified into three major groups.

EMT is an important mechanism by which epithelial cells acquire fibroblast-like properties. This is a characteristic feature in normal cells undergoing embryogenesis and wound healing, but also occurs in pathological processes like fibrogenesis and tumorigenesis. TGFβ is a well-known inducer of EMT (Figure 3). Notably, cells that overexpress SMAD7 or have reduced expression of SMAD3/4 show significantly decreased EMT in response to TGFβ [80][81]. TGFβ was found to induce the expression of transcription factors such as SNAIL, SLUG, TWIST, and FOXC3, which are of key importance to downregulate epithelial genes such as E-CDH1 (encoding E-Cadherin) and mediating acquisition of mesenchymal features by cancer cells [80][82]. Acquiring mesenchymal characteristics is a prerequisite for the spread of cancer cells at secondary sites of the body and the process of metastasis. During breast cancer progression, TGFβ induces single cell migration through a SMAD-mediated pathway involving downstream activation of epidermal growth factor receptor (EGFR), Jun and Rho signaling pathways, and connective tissue growth factor (CTGF) [83][84]. TGFβ also stimulates the secretion of the parathyroid hormone related protein (PTHrP), which in turn induces the expression of bone homing receptor C-X-C chemokine receptor type 4 (CXCR4). CXCR4 promotes chemoattraction of the breast cancer cells to the bone secondary sites during metastasis [85][86] (Figure 2). 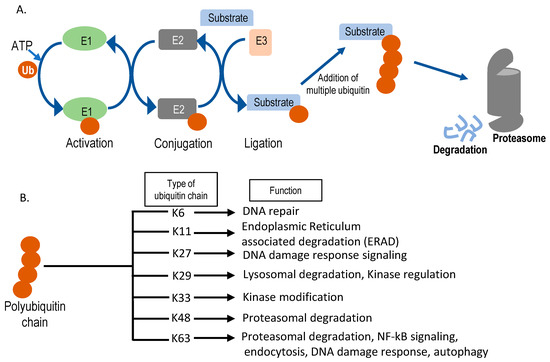 Figure 3. Schematic representation of the ubiquitin-proteasomal degradation pathway. (A) Sequential action of E1 (ubiquitin activating enzyme), E2 (ubiquitin conjugating enzyme), and E3 (ubiquitin ligase) enzymes in substrate ubiquitination. Ubiquitin is denoted as Ub. After multiple ubiquitin molecules are attached to the substrate forming lysine (K)-48, it can get degraded by the 26S proteasome. (B) Different kinds of polyubiquitin chains formed inside the cell and their cellular functions. Seven different ubiquitin lysine residues can be used for sequential chain formation and, based on the position of chain formation, functions vary.

Angiogenesis is the process in which new vasculature is formed from existing blood vessels. This is central to the development of tumors as blood vessels provide a steady supply of blood and associated metabolites, cytokines, and growth factors, which promotes uncontrolled cell proliferation. TGFβ can promote angiogenesis through its effects on various angiogenic factors such as vascular endothelial growth factor (VEGF) and CTGF [85][87] (Figure 2). TGFβ also promotes the production and secretion of well-known angiogenesis promoting matrix metalloproteases, MMP-2 and MMP-9 [76][88]. It has been also shown that TβRI-mediated SMAD2/3 signaling promotes transcription of extracellular matrix proteins such as fibronectin and plasminogen activator inhibitor type 1 (PAI1), which regulate angiogenesis by inducing vessel maturation [89]. Thus, TGFβ can promote angiogenesis and cancer progression by promoting expression of a variety of angiogenic factors (Figure 2).

TGFβ has a broad immunomodulatory effect resulting in mostly pro-tumorigenic effects [90]. In short, the adaptive immune system, consisting of T and B cells, can eliminate tumor cells upon recognition. Through its immunomodulating role, TGFβ signaling can inhibit the function of antigen presenting cells, thereby decreasing T cell activation and decreasing elimination of tumor cells [91]. In addition, TGFβ directly inhibits CD4+ and CD8+ T cells, as well as natural killer (NK) cells. The effect of TGFβ on the innate immune system, like neutrophils and macrophages, also mostly results in pro-tumorigenic effects as it drives these cells from a type 1 differentiated cell into a most immature type 2 cell. This modulation occurs in neutrophils, macrophages, and in the T cells leading to enhanced release of TGFβ into the tumor microenvironment [74][92] (Figure 2).

Here we have discussed, with examples, the pro-tumorigenic effects of TGFβ though it is noteworthy that there are other ways (e.g., regulating stemness, relapse of cancer, etc.) through which this signaling can promote cancer. Overall, it can be concluded that tightly controlled TGFβ signaling is critical for normal functioning of the cell and that perturbations of this pathway can contribute to cancer progression.