Bioreactors have proven useful for a vast amount of applications. Besides classical large-scale bioreactors and fermenters for prokaryotic and eukaryotic organisms, micro-bioreactors, as specialized bioreactor systems, have become an invaluable tool for mammalian 3D cell cultures.

In part I of the review "Advanced 3D Cell Culture Techniques in Micro-Bioreactors, Part I: A Systematic Analysis of the Literature Published between 2000 and 2020", we systematically analyzed the work published between 2000 and 2020 in the field of 3D cell culture in micro-bioreactors (MBRs), which were developed for growing mammalian cells and/or tissues in vitro on a smaller scale when compared to large-scale bioreactors for biotechnological applications and industrial production. Starting from such small-scale bioreactor approaches, MBRs have become important tools in 3D cell culture which prevail today as a specialized bioreactor group in the field of biomedical research. The main aspects in the first part of the review were the MBR design, the corresponding 3D cell culture techniques and the related cellular microenvironment, the mode of cell stimulation and/or nutrient supply, the materials used for MBRs and scaffold fabrication, the applications of the systems and the used cell type or in vitro-model. For this, we used the following key search terms in the PubMed® database of the National Library of Medicine of the National Center for Biotechnology Information (NCBI):

According to our literature analysis in the first part, application areas of MBR systems for 3D cell and/or tissue culture involve mainly the research fields of in-vitro models, tissue engineering and high-throughput-screening. In this context, our literature research revealed that characteristic features of most MBR systems are (i) a low volume of culture medium (less than 500 mL), (ii) an active fluid flow, being realized by a pump, a stirring mechanism, piston movements or mechanical movement of the cell-based constructs in culture medium, and (iii) in some systems the use of scaffolds (see also review part I in this issue).

In this second part of the review, we give a detailed description of the results of our literature research with regard to the existing MBR types and their applications, as well as on common cell/tissue types cultured in such systems. As our literature research revealed a variety of 3D cell culture configurations in the MBR systems, in part I of the review we defined “complexity levels” by means of the corresponding 3D cell culture techniques used in the MBRs. The complexity levels are depicted in Figure 1 and are defined as follows:

Figure 1. For a better overview of the discussed micro-bioreactors (MBR) systems and the corresponding complexity levels the depicted icons are given in the particular sections.

The definition and organization of the complexity levels are based on the knowledge that the spatial distribution of cell–extracellular matrix (ECM) interactions and the spatial distribution of homologous and heterologous cell–cell contacts modulate, among other parameters, the cell behavior. Because at least one of these parameters can be assigned to the 3D cell culture techniques discussed in the present review, we structured the studies according to the complexity levels applied in the MBR systems for better clarity. As already discussed in review part I, the approaches applied to generate such 3D cell constructs in vitro can be further subdivided in scaffold-based and scaffold-free techniques (see also review part I in this issue). For a detailed overview of the 3D cell culture configurations, fluid flow modes and the main MBR types which are discussed in detail in the present review, the reader is referred to review part I.

The immobilization of tissue-specific cells in (hydro)gels and their subsequent implantation into damaged tissues or organs is one of the first attempts in tissue engineering (TE) to regenerate damaged tissue and dates back to the early 1980s. The implanted cells were supposed to fulfill the secretory, structural or barrier- and transport-function of the damaged tissue. Examples of target tissues and organs were liver, pancreas, cartilage, skin and blood vessels. The gel-based cell scaffolds represented a closed system that protected the implanted cells against the immune system of the host, allowed the mass transfer of nutrients and metabolites by diffusion and enabled the long-term secretion of signaling molecules from the implanted cells into the surrounding tissue[1]. The first bioreactor systems used for the expansion and proper in vitro-morphogenesis of the engineered tissues included in this context mainly spinner flasks and stirred tank systems, and tubular perfusion systems specifically designed for vessel culture, respectively  [2][3][4][5] (for the definition of perfusion culture see also review part I, in this issue). One important finding of these early works was that mechanical forces appeared to be another key parameter that modulates the cell behavior in addition to the 3D organization of the ECM and growth factors, and by this determines the quality of the engineered cell/tissue constructs.

Multicellular aggregates have been known since 1944[6], when Holtfreter conducted a study to reveal the mechanisms of gastrulation. In an elegant set of experiments, he could show that the morphogenetic movements of gastrulation are caused by specific changes in the shape and arrangement of the cells involved by using spheroids of endodermal cells placed onto a thick layer of either endoderm, mesoderm or ectoderm. However, it took nearly 30 years until Inch and Sutherland discovered that spheroids can be used as models for nodular carcinomas[7][8]. Since then, numerous applications with homotypic multicellular aggregates have been described which we will highlight according to the cell culture/bioreactor technique applied. Complexity level 2 comprises 123 publications. Of these, the by far largest group is the in vitro-models sub-category which represents 92 of 123 publications, whereas tissue engineering comprises 16 and HTS 15 of 123 publications, respectively (see also review part I in this issue do: 10.3390/pr8121656).

In the context of this review, complexity level 3 describes the 3D arrangement of at least two different cell types by forming cell–cell contacts. The co-culture of different cell-types in a 3D setting supports the obtainment of in vivo-like characteristics by mimicking the microenvironment of the cells in the organism. Almost every second model in this category relies on stem cells, progenitor cells or induced pluripotent stem cells (iPSC), as these can be differentiated into various cell types. As with other levels of complexity, level 3 models are used for various applications ranging from simple in vitro-models to TE and HTS. For a 3D arrangement of cells, scaffold-free techniques, such as spheroids or scaffold-based systems are commonly employed. The majority of these are hydrogel-based scaffolds. (Semi-)Synthetic hydrogels have some benefits, such as availability, customization capabilities and handling. However, the use of extracellular matrix (ECM) much more resembles the physiological environment. As described above, extracellular matrices are also used for the coating of microcarrier beads, for example. Collagen-I and fibrin are widely used as ECM. Besides hydrogel-based scaffolds, fibrous and sponge-like scaffolds, as well as decellularized tissue are used. However, there are also various methods to generate scaffold-free 3D cell aggregates. The formation of 3D cell aggregates can be enforced through microstructured substrates, as shown in Figure 2. In tissue slices, the cells are intrinsically three dimensionally arranged. Tissue slices are generally found in complexity level 3, as they usually consist of several cell types. A wide range of bioreactor systems is used for this purpose. 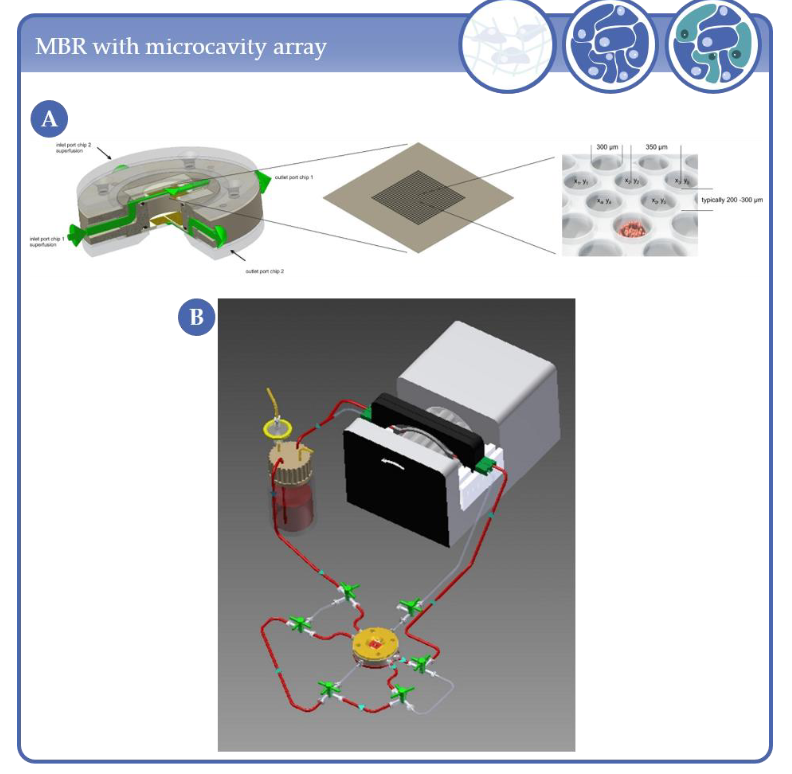 Figure 2. (A) MBR and microcavity array. Typical arrays of a 1 × 1 cm2 area consist of 634 microcavities with 300 µm diameter and 250 µm depth. (B) Schematic representation of the microcavity array-based bioreactor closed circulation loop comprising the bioreactor, a medium reservoir and a cassette pump.

As presented in Figure 7, most of the analyzed studies could be assigned to the “in vitro models” group and were mainly done with cell cultures of complexity level 2, i.e., cell aggregates of one cell type. In this group, approaches that used two or more cell types for the in vitro model, i.e., complexity level 3, represented the second largest proportion or subgroup which was followed by complexity level 1 techniques using immobilized cells in (hydro-) gels. In the “tissue engineering” group again publications using complexity level 2 cell cultures predominate and the number of studies with complexity level 3 was lowest. The same trend holds true for the HTS group. The pie charts further reveal that microfluidic MBRs are most strongly represented throughout all groups, and prevail particularly in the HTS group. The latter might be due to the possibility to integrate analysis features into microfluidic MBRs which support data evaluation in HTS systems. The second largest share among the MBR systems are represented by RWVs and spinner flasks as they support the generation of uniform and complex cell aggregates which are often used for in vitro models.