Mycorrhizae fungi are 400 million-year-old plant symbionts whose evolutionary success has been attributed to their ability to expand the rhizosphere of plants, enabling greater uptake of nutrients from surrounding soils in exchange for photosynthate provided by their host plants.

Early research indicates that the improved phosphorus uptake by mycorrhizal plants can reduce P leaching. This may come about because the uptake of P in roots colonized by mycorrhizal fungi can be 3–5 times higher than in non-mycorrhizal roots [1]. Mycorrhizal inoculation in agricultural production reduces the amount of P fertility amendments required for plant growth. So called legacy phosphorus, i.e. phosphorus stored in the soil from previous applications of fertility amendments, becomes the source of plant nutrition. Avoiding further applications of phosphorus reduces the amount reaching water resources where phosphorus is a pollutant that causes eutrophication in freshwater lakes. The effectiveness of mycorrhizae in agricultural landscapes, however, is variable given the wide variety of farm management systems and practices which affect successful colonization of host plants. Nevertheless, Rillig et al. [2] advocates for the development of mycorrhizal technologies to enhance agroecosystems sustainably.

Mycorrhizal fungi are keystone mutualists in terrestrial ecosystems [3] whose ecological role in assisting recovery of severely disturbed ecosystems [4] is evident because they enhance P plant uptake in both crops and woody plants. Thus, they could play an important role in myco-phytoremediation of soil phosphorus which is often present in excessive amounts. This involves ecological engineering which harnesses nutrient exchange networks, within which mycorrhizae play an important role, crucial to ecosystem succession and resilience [5]. This strategy, though still relatively novel to the field of remediation, has tremendous potential to be applied in the burgeoning field of reconciliation ecology [6], which acknowledges that, while ecosystems cannot be completely restored to their original state, mitigation of degradation can return them to a new balance [7].

Of the seven groups of mycorrhizae, the two most common in agricultural and forested lands [8] are also the most likely to be employed in myco-phytoremediation: arbuscular mycorrhizae fungi (AMF) [9] and ectomycorrhizae (ECM). . While AMF and ECM provide similar services to the plant (i.e., improved access to P) [1], their hyphae differ in architecture and in how they transfer P to the plant [10]. In the AMF, the transfer is accomplished intercellularly and via intracellular arbuscules from extra-radical hyphae that extend directly into the soil beyond plant rhizosphere depletion zones [11]. In ECM, the transfer occurs via intercellular Hartig net hyphal networks surrounding epidermal and cortex cells while outside of the mantle, extra radical mycelia form extensive nutrient-absorbing networks in the soil [12][13]. It is well established that AMF and ECM greatly enhance the uptake of immobile soil nutrients such as P and water by plant root hosts in exchange for carbohydrates supplied by the host plant [14][15] and improve soil properties. They also increase below- and above-ground biodiversity and provide pathogen resistance. This results in improved tree and shrub survival, better growth and establishment on moisture-, nutrient- and salt-stressed soils [16][17][18][19]. In addition, they facilitate plant succession [20][21].

Additionally, when planting into AMF grasslands, tree and shrub species’ growth and survival is improved by inoculation with ECM specific to the species planted [22]. ECM presence can support native trees to endure aggressive non-native species’ presence [23] as well as play a critical role in the restoration of degraded sites [24]. Mycorrhizae can mitigate P pollution at each stage of the three-pronged paradigm of water resource protection: source reduction via decreasing P amendment amounts needed, contamination event reduction by decreasing erosion through improved soil structure and vegetation establishment, and pollutant interception via redirecting P into plant roots out of soil water.

Any design of a phosphorus mitigation strategy that involves mycorrhizae has to consider landscape position and soils which affect P availability and fate. In an ideal agricultural landscape, production fields are separated from water courses by a forested (or otherwise vegetated) riparian buffer [25], that attenuates the increased P in leachate when high fertilizer or manure P is applied [26]. Each landscape element in the catena has a different role to play in P mitigation. Drainage class and vegetation need to be considered as variables for establishment of mycorrhizal communities. The mycorrhizal communities likely differ between high organic matter riparian forest including both AMF and ECM and the agricultural field dominated by AMF [27]. Soil drainage class, tantamount to location in a toposequence, per se may not affect mycorrhizal plant infections. In a study on soybean fields stretching across three soil drainage classes (poorly, somewhat poorly, and moderately well drained), more AMF spores were found in the more poorly drained than the better drained soils. But, there was no discernible difference in colonization of plant roots [28]. In agricultural systems where flooding diminishes vegetation, crops following the flood are P deficient early in the season. The lack of hosts during flooding may result in lower colonization rates by AMF and thus less P uptake [29]. Lack of vegetation during flooding is not likely to occur in forested riparian forests [30], and agricultural fields can be managed to avoid fallow conditions by planting rotations and cover crops that host mycorrhizae [31].

However, drainage class may still enter into any myco-phytoremediation design because prolonged flooding in wetland riparian buffer, remobilizes P adsorbed to soil colloids. In particular, under anaerobic conditions ferric iron is reduced, releasing phosphate that would otherwise be strongly sorbed to ferric oxides [32]. It is not clear whether mycorrhizae can help with recovering P released in this way.

In terms of the water mitigation paradigm, agricultural fields would be targets of source reduction as they are the primary recipients of P. However, in an area where agriculture was practiced for decades, it is likely the soil has sufficient P to be a source itself [33]. Here myco-phytoremediation may reduce legacy P.

High SRP concentrations in agricultural fields are likely to reduce mycorrhizal infections [34]. Therefore, the use and amount of fertilizer P should be judicious [35][36]. Management of agricultural lands should consider the use of alternatives to inorganic P fertilizer to promote mycorrhizal growth and colonization [37].

Consequently, managing the field for mycorrhizae can reduce the amount of P fertilizer needed to achieve yield goals [31]. This includes reducing tilling and maintaining hosts by implementing crop rotation, and also choosing crops with root architecture efficient in accessing sufficient P and forming a symbiosis with AMF [38].

Oka [39] found that P application on soy beans could be reduced from 150 to 50 kg P ha−1 without yield loss when it followed wheat, an AMF mycorrhizal crop (Triticum sativum); than when followed by radish (Raphanus sativus), a non-mycorrhizal crop. The benefits may be due to better establishment of mycorrhizae–plant associations under the low soil-P supply in the early season with increased uptake of P ensuing [40]. Application of excessive fertilizer at this time of the growing season may inhibit mycorrhizal infections [40] and should be avoided. Mycorrhizal cover crops may thus have several benefits to the plant. First, they provide hosts for mycorrhizae and a source of organic P, scavenged between cash crops. In addition, over time, the amount of sediment-bound phosphorus lost by erosion will diminish. Consequently, downslope P accumulations in riparian areas are minimized.

Although agriculture can be regarded as a myco-phytoremediation system for legacy P, agricultural practices affect mycorrhizae. The type and timing of tillage has been identified as one such factor. The role of fungi in plant nutrition and soil conservation is compromised when the formation and survival of propagules (i.e., spores, hyphae, colonized roots) are disrupted though tillage. Spores serve as “long- term” propagules when host plants are not present, whereas hyphae are the main source of inoculum when plants are present in undisturbed soil. Deep plowing can ‘dilute’ propagules, reducing plant root inoculation, especially in autumn when hyphae are detached from the host plant. Conservation tillage can protect survivability and inocula[41]tion, thereby improving soil aggregation and P uptake [42].

The structure and texture of soils is also an important factor in whether AMF has significant impacts on leaching and erosion. In agriculture, it is important to look at the relationship between fertilization and runoff. AMF significantly reduced nutrient leaching after rainfall events in sandy grassland soils [43]. This finding has important implications for soils with poor P sorption capacity such as sandy soils and other highly permeable soils or heavily manured soils [44], where P can be lost during rainfall events.

Furthermore, mycorrhizae can intercept P in soil solution before it leaves the root zone with deep percolation. In contrast to the many studies that assess the effect of mycorrhizae on plant uptake of P, only few of them report how mycorrhizae affect P leaching. This is usually not regarded as a major pathway of P export from a field because of the high affinity of phosphate [45] to soil surfaces. However, Asghari et al. [46] explained that sandy-textured soils are likely to provide little internal surfaces for P adsorption the major mechanism of P retention in soils. In addition, soils that receive high P fertilizer may also leach phosphate [26]. Water quality in freshwater bodies is sensitive to even small amounts of P [41] and thus leaching may have a significant effect. Ashgari et al. [46] found that AMF can reduce leachate P from soil columns packed with a loamy sand. In another laboratory experiment Köhl and van der Heijden [47] found that the effect varied with AMF species probably due to differences in root colonization: the more root colonization the greater the growth of the plant and presumably the less P was leached. This is because AMF symbiosis assists plants with P uptake [48] through reaching beyond P depletion zones to access greater soil P reserves [49]. Plant response to mycorrhizal formation also depends upon the extent of mycorrhizal development [14]. It is not clear whether the results of these controlled laboratory studies are directly transferable to processes that occur in the field where many other factors are in play; more research is needed here. 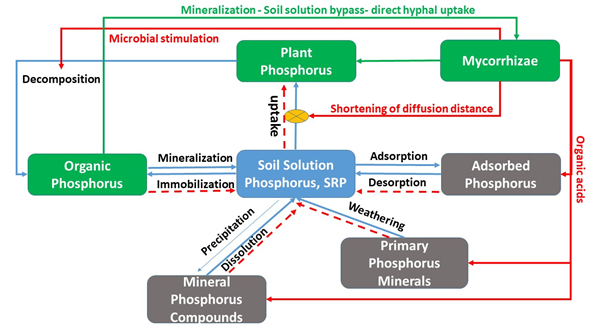 Figure 1. Influence of mycorrhizae on phosphorus cycling processes and pools. Red and green arrows are processes influenced by mycorrhizae. Broken lines show the net direction of reactions due to mycorrhizal effects.

Mycorrhizae are involved in most aspects of P cycling as can be seen in Figure 1. Data from the literature show the effect of mycorrhizae on plant uptake, leachate and soil concentration. For example, plant uptake can be enhanced by between 40 and several 100s of percent, leachate P is reduced by up to 60% and extractable soil P by 15% in a growing season (Table 1). However, variations in both plant and mycorrhizae species greatly influence P removal from soil and thus its concentration in leachate. The effects of mycorrhizae on phosphorus mitigation should be considered when investigating strategies for water quality improvement from upland source areas.

Table 1. The effect of mycorrhizae on plant uptake, leaching and soil P from studies carried out under different experimental conditions and with different objectives. Underscored show the physical quantity measured.