Co-culture system provides a novel platform to study interaction between different cell types in an in-vitro method. The co-cultures techniques have played key role in the understanding of cell–cell communication and relevant for drug response analysis.

In vitro co-culture techniques can be used to mimic in vivo environments and to observe interactions among cells (autocrine) and between cells (paracrine) [1]. Co-culture systems may be used to explore the mechanisms of action of drugs and their potential targets; they help to bridge the gap between mono-culture methods and animal models. Co-culture systems can be divided into two main categories, indirect methods and direct methods [2]. In the indirect methods, cells are physically separated into two different populations using trans-well inserts and/or overflow culture chambers that allow communication only via secretory factors. On the other hand, direct co-culture methods allow cell–cell interactions between different type of cells, which is typically achieved by spatially controlling the positions of adherent cells within a culture dish [3]. Generally, co-culture systems are used to study the secretory and transcription factors which are partially/fully involved in induction of cell differentiation, regulation of cellular proliferation, and production of metabolites for signaling cascades. A co-culture system can be used to reduce the amount of drug needed for a study, identify the target organs of a drug, and predict the adverse effects of drug metabolites [4]. Thus, this technique shows great potential for cell toxicological studies in the future and is now used chiefly for pharmacodynamic research.

Co-culture systems are widely used to study cross-talk between different cell lines, including adipocytes, endothelial cells, fibroblasts, macrophages, and muscle cells. Also, it is a crucial tool for understanding the various metabolic connections between adipose and other tissues [5]. The co-culture studies can provide realistic insights on cell–cell interactions via secretory factors that are effect in various metabolic functions such as energy homeostasis, muscle atrophy, and obesity and related co-morbidities. Previously, Ruiz-Ojeda et al. (2016) [6] investigated the co-culture relationship between adipocytes and macrophages and how they communicate under conditions that mimic obesity, insulin resistance, or inflammation. Similarly, an indirect co-culture system used to study intercellular communication between muscle and adipocyte cells was developed by Choi et al. (2013) [7]. Pre-adipocyte differentiation is regulated by differentiation myoblasts in the co-culture system, while pre-adipocytes promote adipogenic gene expression in muscle satellite cells co-cultured with pre-adipocytes. Muscle and fat tissue are major paracrine and endocrine organs that communicate with each other regarding muscle development, regulation of energy homeostasis, and insulin sensitivity [8]. For example, exercise-induced improvements in muscle function influence carbohydrate and fatty acid metabolism in the whole body as well as peripheral insulin sensitivity. Skeletal muscle communicates with other tissue types (i.e., adipose) to regulate, either directly or indirectly, whole-body energy homeostasis through myokine release [9] (Figure 1). Muscle-derived secretory proteins—including IL-6, irisin, myostatin—and some peptides, known as myokines, regulate adipogenesis via paracrine and endocrine effects [10]. Recently, Chu et al. (2016) [11] reported that porcine pre-adipocyte differentiation was inhibited in a C2C12 co-culture cells and that the expression levels of early differentiation marker genes in adipocytes were lower than those in mono-cultured adipocyte cells. Recently, Shahin-Shamsabadi [12] developed a 3D bio-fabrication method using adipocytes and myoblasts, that analyzed specifically either in direct physical contact or in close proximity such that the paracrine interaction between the cells. The physical contact between cells have been flouted in co-culture systems using transwell inserts and can be used in studies for the development of anti-obesity drugs. Anan et al. [13] studied the method for analyzing the direct interaction between adipose tissue and cardiomyocytes. The HL-1 cells suppressed the development of CD44+/CD105+ mesenchymal stem cell-like cells and lipid-laden preadipocytes from ATFs. In addition, the HL-1 cells stimulated the secretion of adiponectin in adipose tissue fragments (ATF), whereas they decreased production of leptin in a co-culture experiment. 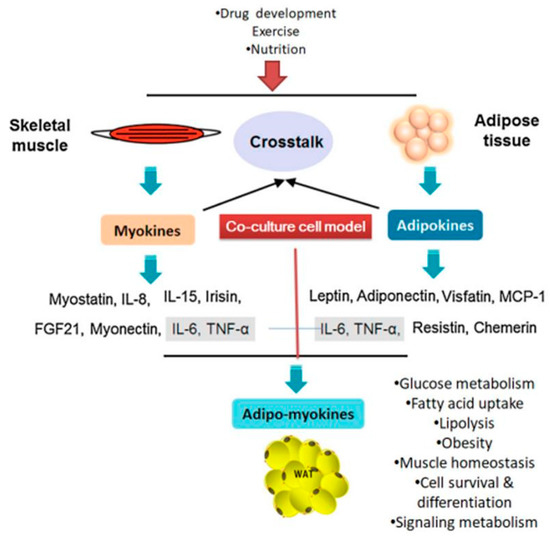 Co-culture models have been used to examine diverse cellular functions, such as interactions between muscle and nerve cells, angiogenesis, adipocyte/muscle cell cross-talk, immune cell functions, etc. [15]. Interactions between co-cultured myoblasts and adipocytes have been implicated in facilitation of muscle growth, tissue repair and muscle regeneration. These findings have led to the discovery of adipo-myokine secretory factors (AMSFs), which are produced by adipocytes and myocytes to induce differentiation and proliferation. Table 1 summarizes the findings of recent studies in co-culture systems using adipose and muscle cells.

At present, our knowledge of the interactions between adipocytes and myocytes largely stems from studies of the effects of individual adipokine factors on cultured muscle cells or adipocytes and vice versa. A wide variety of adipocyte mediated secretory molecules regulate muscle metabolism without affecting other tissues. Furthermore, in an in vitro co-culture system, myocytes were exposed to a group of free fatty acids (FFAs) and adipo-myokines [16][17] that communicate signals to other organs. These studies have fueled attention towards analyses of metabolic communication between fat and muscle cells. Adipose tissue is known to protect other cell types from lipotoxicity by providing a safe place to store surplus energy. However, obesity-related dysregulation of adipose tissue promotes lipid oversupply to several non-adipocyte tissue types. This can contribute to the development of metabolic diseases, such as cardiovascular disease and liver and bone disorders. Adipose tissue is an important endocrine organ that communicates with the brain and peripheral tissues to bring about changes in whole-body energy homeostasis through a network of circulating adipokines [18]. These signaling factors include peptide hormones; chemokines such as leptin, adiponectin, resistin, visfatin, and apelin; and pro-inflammatory cytokines including interleukins (IL-1β, IL-6 and IL-15) and tumor necrosis factor-α (TNF-α). Obesity may lower the levels of circulating insulin-sensitizing adipokines such as adiponectin while increasing the levels of pro-inflammatory response molecules such as IL-6 and TNF-α in adipose tissues [19].