Mesenchymal stem cells (MSCs) are multipotent cells which can proliferate and replace dead cells in the body. MSCs also secrete immunomodulatory molecules, creating a regenerative microenvironment that has an excellent potential for tissue regeneration.

MSCs have the potential for self-renewal and limited differentiation. They exist in many different tissues and organs such as adipose tissue, bone marrow, skin, fallopian tube, cord blood, liver and lungs[1]. MSCs were defined as stromal cells of the bone marrow and showed the properties of hematopoietic stem-like cells but were unable to differentiate into hematopoietic cells[2].

2. Mechanism of Actions of Adult MSCs

Cell fusion is defined as the process of one cell interacting with neighboring cells to form a multicellular aggregate with a common function (Figure 1). In this process, the genetic information is fused and expressed as molecular markers that show characteristic features of the fused cells[12]. Fusion of human MSCs with rodent cerebellar Purkinje cells was observed, and the fused cells were used to improve the therapy of neurodegenerative disorders or cerebellar related issues[13]. MSCs could also fuse with human gastrointestinal epithelial cells to form aggregates while expressing characteristic features of both cell types[14].

Figure 1. Fusion of mesenchymal stem cells with non-stem cells. Mesenchymal stem cells interact with neighboring cells to form a multicellular aggregate with improved characteristics, and these fused cells can be used for treatment of neurodegenerative or gastrointestinal disorders.

Mitochondrial transfer is one of the unique phenomena of MSCs in which the cells can transfer mitochondria to neighboring injured cells, which are then restored (Figure 2) and can aid in tissue repair and regeneration[15][16]. Initially, transfer was proved by co-culture experiments when mitochondria from human MSCs were found in recipient cells that had been devoid of mitochondria[15]. Mitochondrial transfer was observed to occur through formation of intracellular nanotubes, gap junctions, cell fusion, microvesicles, and direct uptake of isolated mitochondria[17][18][19][20]. Mitochondrial transfer from MSCs plays a crucial role in regeneration of several tissues including lung, heart, kidney, and brain[21]. Many stress signals, such as the release of damaged mitochondria, mitochondrial DNA, and an increased level of reactive oxygen species induced the transfer of mitochondria from MSCs to recipient cells[20][22]. The expression of Miro1 protein in MSCs was shown to play an important role during tunnel tube formation for mitochondrial transfer to the injured cell under stress[23][24]. This feature of MSCs was found to repair cardiomyocytes during myocardial infarction[25][26], damaged corneal epithelium in the eye[27] [48], renal tubular cells[28], brain-cortical cells[29], and lung cells[30]. 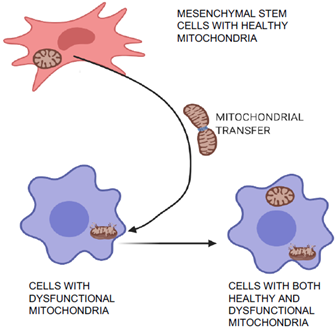 Extracellular vesicles are released by many types of cells, including MSCs. The size of these vesicles ranges from 30–120 nm and they are called exosomes. The most important capabilities of these vesicles are to transport essential macromolecules like protein and genetic material to neighboring cells by endocytosis[31]. However, currently, these vesicles pose difficulties with extraction, quality, and reproducibility from differing cell types. MSC-derived extracellular vesicles or exosomes were utilized for cell-free therapy[32][33][34]. MSC-derived exosomes have been employed to overcome the transplant-associated problem of Graft vs. Host Disease (GvHD)[35]. Studies have shown that MSC-derived paracrine factors induce signaling, promote improved skin wound healing[36], and also mediate essential physiological functions[37]. Although some therapeutic benefits of MSCs are obtained through trans-differentiation and most of the benefits are mediated through paracrine mechanisms[38], it is worth noting that therapeutic effects of microvesicles and exosomes derived from MSCs differ depending on the tissue or organ in which they resided[39] . Thus, further studies are needed to compare exosomes derived from MSCs of differing origins.

Organ or tissue repair with cell therapy has emerged as a promising treatment alternative in patients with degenerative diseases. Researchers are currently developing a variety of therapies with stem cells obtained from many different sources and which can provide trophic and paracrine support or even replace dying cells[40]. A fundamental goal of regenerative medicine is to repair the failing organ by replenishing functional cells. A variety of autologous and allogeneic cell types have been tested for repair of diseases in humans, including cardiac diseases, and have shown a wide range of results, from significant improvement to no improvement[41][42][43]. MSCs isolated from adult organs hold promise, but scalability and senescence are major issues. During insult to any organ, cells are lost or become dysfunctional, and the post-insult milieu can have a negative impact on the health of autologous MSCs and their therapeutic capabilities. Thus, manipulation of autologous cells into primitive iPSCs and then further differentiation into specific required cell types is an attractive approach in stem cell transplantation therapy (Figure 3). Studies have shown that iMSCs promote healing in inflammatory bowel disease[44] and limb ischemia[45]. Moreover, iMSCs promote angiogenesis in ischemia models[46] and prevent allergic airway inflammation[47]. 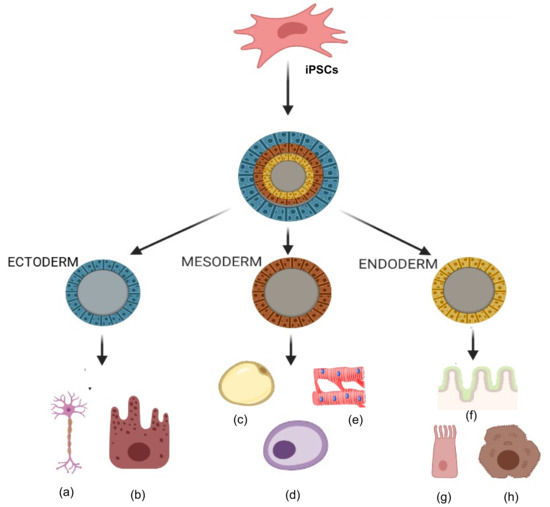