Macrophages are key target immune cells in atherosclerosis. A hallmark of atherosclerosis is the accumulation of pro-inflammatory macrophages in coronary arteries that respond to pro-atherogenic stimuli and failure of digesting lipids that contribute to foam cell formation in atherosclerotic plaques.

Cardiovascular disease (CVD) is a complex human disease that restricts blood flow in the heart and blood vessels [1]. Atherosclerosis is a major form of CVD, symbolized by excess buildup of arterial plaque (atheroma) along the arterial wall [2]. The arterial plaque in atherosclerosis is composed of lipids (cholesterol and fatty acids), debris, fibrotic material, macrophages (Macs), dendritic cells (DCs), and some other host immune cells [3]. Within the atherosclerotic plaques, Macs polarize to a pro-inflammatory state which ingests and degrade debris and lipids, promoting the formation of foam cells in the plaques, leading to the adverse effects of restricted blood flow [4].

Gut microbiota refers to microorganisms (with gene makeup distinctive from the host) living in the GI tract, which produce various unique metabolites. Metabolites refer to small molecules that result from metabolic processes, produced endogenously by the host and by microorganisms’ processing of dietary compounds. Identification of a microbiome profile in the GI tract and the functional determination of microbiome-derived metabolites are very important for health and disease [5][6][7]. A study demonstrated that tryptophan-derived compounds are depleted in the GI tract and the circulation of germ-free mice, indicating these tryptophan metabolites are dependent on the microbiota [6]. Indole is an important beneficial metabolite produced from tryptophan; it has been shown that indole is not detected in the cecal tissue of germ-free mice [6].

There is now an increasing appreciation that the microbiota is an essential partner in overall gut homeostasis and host health. Furthermore, when the microbiota is perturbed by environmental or dietary stresses (referred to as dysbiosis), it can lead to increased inflammation and altered metabolism in the host [7] (Figure 1). There is a wealth of compelling evidence that the microbiota is linked with multiple complex diseases, including CVD [8]; however, our understanding of the mechanisms of how the microbiota affect CVD is limited. Perhaps the most specific example of the link between the microbiota and CVD is the production of trimethylamine-N-oxide (TMAO), the oxidized form of trimethylamine (TMA), a microbiota-dependent detrimental metabolite derived from diets rich in phosphatidylcholine, choline, and L-carnitine, associated with a significantly increased risk of atherosclerosis [9]. Although a number of microbiota-derived metabolites have been identified and studied, the full array of activities for most individual metabolites has not been completely established, further research is needed to better understand the properties and functions of the metabolites, the microbe(s) that produce them, the cellular and molecular targets, and their roles in health and disease. Thus, in this review, we discuss that the microbiota promotes atherosclerosis by the production of specific beneficial (e.g., Indole) and detrimental (e.g., Indoxyl Sulfate, TMA/TMAO) metabolites [10], and their impacts on the development of atherosclerosis in obese patients by regulating chronic endotoxemic/lipotoxic inflammation and metabolic functions. 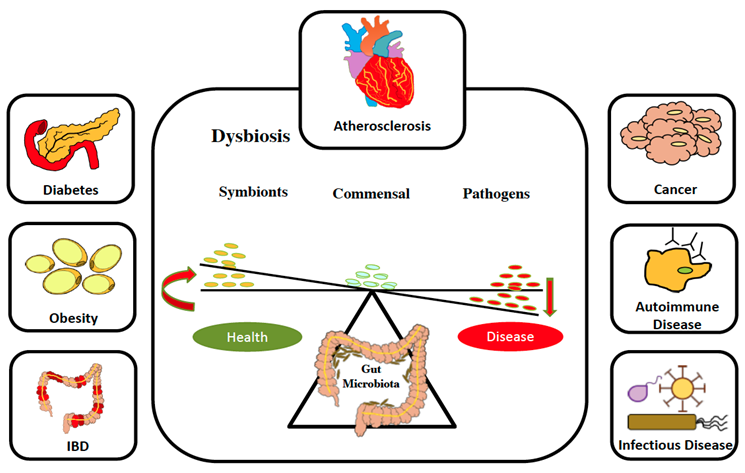 Figure 1. The microbiota is important for overall health. The balance between health and disease is regulated by microbiota in many ways. Microbiota in equilibrium is linked with homeostasis; when it is perturbed, it leads to dysbiosis and diseases.

The microbiota is recognized for its role in the production of beneficial SCFAs and their functions in the regulation of complex chronic inflammatory diseases such as atherosclerosis. A link between the microbiota and atherosclerosis emerged from studies of TMAO [13][14][15].

A significant hallmark of atherosclerosis is the accumulation of pro-inflammatory Macs and dendritic cells (DCs) in coronary arteries that respond to pro-atherogenic stimuli, such as free fatty acids (FFAs) and oxidized LDLs (oxLDLs), and the failure to digest lipids that contribute to the formation of foam cells in atherosclerotic plaques [16][17]. Mechanisms that reduce Mac/DC inflammation, increase lipid degradation, and prevent foam cell formation would all decrease atherosclerosis progression.

There is overwhelming evidence that microbiome, microbial metabolism, and microbiota-derived/dependent nutritional metabolites contribute to the pathogenesis of atherosclerosis [18]. The mechanistic links between gut microbiota and health/disease outcome are largely undefined. Indole, TMAO, and Indoxyl sulfate are among the few best-studied microbiome-derived/dependent metabolites that have been reported to have roles in the regulation of atherosclerosis [19].

TMAO is a microbial dependent metabolite. It is a byproduct of microbial metabolism of L-carnitine and choline in the gut after ingestion of eggs, meat, or fish, and TMAO is directly correlated with atherosclerosis [20]. After metabolizing carnitine and choline to TMA, through the bacteria, TMA is absorbed from the gut and transferred into the circulation [21]. Then, via an enzyme named Flavin monooxygenase, TMA is oxidized into TMAO in the liver. Other than atherosclerosis, plasma levels of TMAO are increased in patients with chronic kidney diseases (CKD) and diabetes as well [22]. The reason for the TMAO increase in these diseases is still unknown. Some studies suggest that reduced clearance of TMAO by kidneys in CKD or increased TMAO metabolism levels by bacteria in the gut are among the possible reasons [23]. Other data suggest that dysbiosis is directly linked to increased serum levels of TMAO. In the CKD patients, the relative abundance of dominant bacteria changes, and the expression of the enzyme that leads to TMAO production increases [24].

Rodent studies also show that TMAO, as a risk factor, enhances atherosclerosis prevalence through increasing the expression of scavenger receptors and reducing cholesterol efflux in Macs, and consequently increases levels of foam cell formation of the aforementioned Macs [25]. This proatherogenic metabolite has a positive correlation with lesion formation and development, as well as the size of the atherosclerotic plaque in arteries [26]. Atherosclerosis starts with the accumulation of foam cells in the arteries. Monocytes in the circulation penetrate the arteries where there are lesions and transform into Macs; by phagocyting modified cholesterol and lipoproteins, these Macs transform into foam cells (Figure 2). Accumulation of foam cells under the artery endothelial cells then form plaques, and the rupture of the plaque can block arteries and cause a stroke [27]. 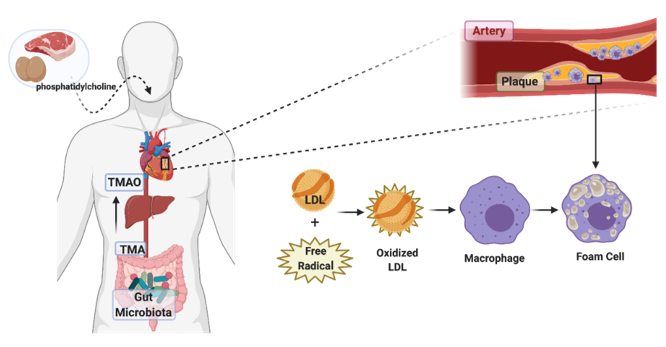 Figure 2. Role of trimethylamine N-oxide in atherosclerosis. Schematic pathway of phosphatidylcholine transformation to TMA and TMAO (trimethylamine N-oxide) via the gut microbiota. Dietary intake of foods like red meat and egg can alter the composition of gut microbiota. It can result in increased TMA production levels, subsequently leading to increased TMAO synthesis in the liver, eventually leading to elevated levels of oxidized LDLs and increased plaque formation. Accumulated foam cells in the plaques are lipid-laden Macs that have ingested modified lipoproteins, having a foamy appearance. In atherosclerosis, inflammatory Macs are converted into foam cells.

Macs regulate lipoprotein metabolism and are the key cells involved in atherosclerosis because they are the origin of the foam cells. The migration of Macs to the plaque areas and the mechanisms of foam cell transformation have very important implications. There is some evidence suggesting that TMAO is involved [28]. When the LDLs or low-density lipoproteins are oxidized by the free radicals in the arterial walls, the Macs are triggered to phagocytose these modified lipoproteins by increasing the expression of scavenger receptors such as CD36 and SRA-1 that have high sensitivity to modified lipoproteins [29]. TMAO upregulates these scavenger receptors’ expression and induces the uptake of these modified LDLs by Macs [30]. TMAO increases Macs’ migration and promotes the expression of inflammatory cytokines such as IL-6 and TNF [31].

Indoxyl sulfate, aka, 3-indoxyl sulfate or 3-indoxylsulfuric acid (I3S), is a bacterial metabolic byproduct of dietary nutrients. I3S plays a role as a uremic toxin and a cardiotoxin [32]. A microbial enzyme, named tryptophanase, catabolizes the tryptophan to indole. Then the indole gets absorbed and converted into indoxyl sulfate in the liver. Dysbiosis and epigenetic alterations of the gut microbiota alter the amino acid metabolism and increase the levels of I3S in the serum (Figure 3) [33]. Also, the amount of tryptophanase expression in the microbiota increases to facilitate Indoxyl sulfate production in CKD and CVD patients [34], and the prevalence of atherosclerosis is higher in CKD patients [35]. Based on the epidemiology studies, CKD patients have a high risk for atherosclerosis beyond traditional risk factors, indicating the possible role of microbiota in the pathogenesis of the diseases, such as CKD and CVD.

Plasma concentration of I3S increases in atherosclerosis and CKD patients [36]. I3S has a high affinity to proteins, and therefore it cannot be removed by kidneys easily [37]. In vitro studies show that indoxyl sulfate can enhance leukocyte activation and increase their adhesion to endothelial cells and eventually cause elevated levels of oxidative stress and inflammation [38]. Furthermore, it is hypothesized that indoxyl sulfate reduces Macs’ cholesterol efflux and induces foam cell formation [39]. I3S is also related to glucose intolerance by reducing GLUT-1 expression and the hepatic LXR signaling pathway [40]. Thus, increased levels of inflammatory Macs may reflect the severity of atherosclerosis.

Proteomics studies indicate activation of some pathways via I3S in Macs, such as the ubiquitin-proteasome pathway and Notch signaling [41]. Some studies show that membrane transport proteins such as OATP2B1 regulates the uptake of I3S in Macs [42]. I3S is an agonist for AhR, and it can increase cell proliferation of vascular smooth muscle through AhR and activation of NF-κB signaling [43]. Furthermore, I3S is known to increase ROS production [44].

Indole is a gut microbiota-derived tryptophan catabolite. It is produced during the tryptophan metabolic process by the tryptophan lyase (tnaA) enzyme (Figure 4) [45]. Indole is an agonist for the aryl hydrocarbon receptor (AhR). There is a high concentration of indole in the GI tract, and it can enter the blood circulation [46]. Indole is detectable in human and mouse luminal contents at 0.1 to 4 mM concentrations and around 0.1 to 10 µM in the circulation [47]. Indole is a very small molecule, and it is easily diffusible and can directly interact with immune cells [48].

Figure 4. Indole is a gut microbiota-derived metabolite. Indole is produced from tryptophan amino acid through the action of the tryptophan lyase enzyme. Indole is an aromatic heterocyclic organic molecule and has a bicyclic structure. Indole has anti-inflammatory regulatory effects on intestinal epithelial cells and immune cells in the gut and distal organs (through circulation) in the body.

It has been reported that indole has anti-inflammatory effects [49]. Studies show that plasma levels of indole and indole derivatives are negatively correlated to advanced atherosclerosis [50]. Indole is produced by various gram-negative and gram-positive bacteria species, such as E. coli, Bacteroides, and Clostridium [51]. In in vitro studies have indicated that other than immunomodulatory effects, indole promotes health outcomes in intestinal epithelial cells in humans and rodents by preventing colitis induced by dextran sulfate sodium (DSS) and strengthening the epithelial barrier [52]. A study suggested the important positive role of indole supplementation to facilitate anti-inflammatory drugs [53].