Several studies have demonstrated that mitochondrial dysfunction leads to several neurodegenerative diseases, including Alzheimer's disease (AD) [1][2][3]. AD shows common symptoms such as insanity and leads to a morbid state and death in the aged population [4]. In both familial and sporadic patterns, AD is characterized by dual unique medical hallmarks: senile plaques formed via the extracellular accumulation of amyloid-β (Aβ) peptide and intracellular deposition of neurofibrillary tangles (NFTs) formed via hyperphosphorylation of tau proteins [5][6]. These phenomena are accompanied by both pre- and postsynaptic and neuronal casualty [7]; however, the pathogenesis of AD pathogenesis is still unclear. In addition, multiple reports demonstrate that the alterations in axonal transport (AT) are the precise culprit for the development of neurodevelopmental diseases such as AD [8]. AD in mammals involves the atypical decomposition of several abnormal organelles like mitochondria, resulting in the degeneration of senile plaques along with abnormal neuronal expansion leading to a decline in neurites [9]. Phytochemicals or plant-derived chemical compounds are currently under research with unestablished health benefits [10]. Phytochemicals show multiple beneficial effects on mitochondrial dysfunction [11]; however, enough investigations have not been performed yet examining their clinical application.

A wide range of studies have demonstrated that numerous bioactive phytochemicals and other organic compounds may improve the treatment of AD [12]. Phytochemicals, including polyphenolic compounds that are present in numerous plants exhibit several essential properties such as anti-inflammatory potential, DNA repair, autophagy, and antioxidant activities [13]. In the brains of AD patients as well as transgenic AD mouse models, APP and Aβ are present in mitochondrial membranes, interrupting the mitochondrial electron transport system [14]. Potential therapeutic effects of these phytochemicals include antioxidant and anti-inflammatory activities via modulation of Aβ toxicity. Mitochondrial dysfunction discharges excessive quantities of H2O2, which ultimately leads to irreversible cellular dysfunction and damage in the brain [15]. Aggregated Aβ peptides, H2O2-induced hydroxyl radical, and mitochondrial dysfunction caused by APP in AD may restrain in addition to pharmacological approaches using phytochemicals that preserve mitochondrial dynamics [16]. Owing to their therapeutic capabilities, phytobioactive compounds have been deliberated as favorable beneficial agents for AD and age-related diseases [17].

Oxidative stress (OS) occurs owing to the imbalance between the generation of reactive oxygen species (ROS) and cellular antioxidant potential. OS stands for excess quantities of ROS production that incur damage to nucleic acids and small molecules such as proteins or lipids. OS can lead to neuronal, specifically causing neurodegenerative diseases and cellular aging processes [18]. Restrained ROS production has physiological roles, particularly in controlling cellular redox equilibrium and regulating intracellular signal transduction [19][20]. ROS (collectively, H2O2, OH, and O2).-) may be the causative factor leading to defects in mitochondrial respiration and the development processes of the human brain that are accompanied by augmented ROS generation. They also contribute to dynamic changes in the brain during AD and aging progression (Figure 1).

The primary origins of ROS production in the brain under functional circumstances as well as in pathological processes (e.g., neurological diseases) are complex I and complex III of the respiratory chain. Complex I discharge superoxide (O2.-) into the intermembrane space such as the matrix, and complex III liberates O2.- to both sides of the electron transport chain (ETC) or inner mitochondrial membrane. Hydrogen peroxide (H2O2) can be generated from O2.- by an enzyme called superoxide dismutase. Both molecules can cross the inner membranes and can produce extremely reactive hydroxyl radical (.OH). Under physiological conditions, the proton movements and the respiratory state of mitochondria produce H2O2 and O2- from the electron transport chain (ETC) [21]. Complex IV also enhances the generation of ROS, whereas complexes III and V generate a minimal amount of ROS [22]. Apart from these, defective production and detoxification of ROS are critically involved in mitochondrial dysfunction [23]. During the aging process, a high amount of ROS is generated due to defective mitochondria. Likewise, a decline in antioxidant enzyme activities ensues, leading to increased ROS production[23][24]. Excess ROS production adversely affects the ETC; complexes I, III, and IV appear to be the most affected, while complex II remains undisturbed [23][25].

3. Mitochondrial Deformity as an Outcome of AD Progression 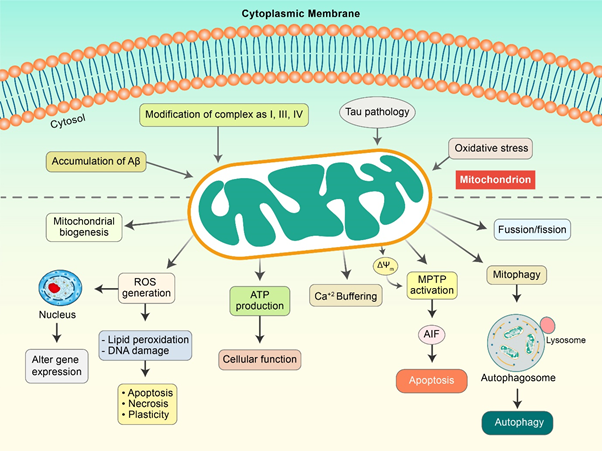 Flavonoids exert neuronal effects via several lipid kinase and protein kinase signaling pathways, such as the protein kinase C, MAPK tyrosine kinase, PI3K/Akt signaling pathways, and NF-κB pathway [60]. The stimulatory or inhibitory properties of these pathways can significantly modulate gene expression by altering the phosphorylation state as well as affecting the neuronal properties and function of target molecules. As a result, this might lead to synaptic protein synthesis, morphological variations, and plasticity involved in neurodegenerative processes in AD. Serine/threonine kinases, known as MAPK and mitogen-activated kinases, regulate numerous cellular functions via extracellular signal transduction pathways, generating intracellular downstream signals [61]. Flavonoids have selectively interacted with MAPK kinases, including ERK, MEK1, and MEK2 signaling, resulting in the activation of downstream cAMP response element-binding protein (CREB) [62]. These results might lead to alterations in memory function and synaptic plasticity via the upregulation of neuroprotective pathways in AD.

Blueberry supplementation rich in anthocyanins and flavonols increased memory performance in rats via CREB activation and promoting pro-BDNF and mature BDNF levels in the hippocampus [63]. In another study, 12 weeks of blueberry supplementation activated Akt phosphorylation, mTOR downstream activation, and enhanced activity-regulated cytoskeletal-associated protein (Arc/Arg3.1) expression in the hippocampus of aged animals [63]. This might promote morphology and spine density in neuronal cells, thereby enhancing learning and memory function. In addition, treatment with green tea catechins ameliorated memory impairments and promoted spatial learning function by diminishing the oligomers of Aβ (1–42) in senescence-accelerated mice by augmenting the expression of the PKA/CREB pathway in the hippocampus [64]. Furthermore, EGCG promoted ERK and PI3K-mediated phosphorylation of CREB as well as stimulated GluR2 levels and modulated synaptogenesis, neurotransmission activity, and plasticity in cortical neurons [65]. In addition, flavonoids modulate the activity of PI3K via direct interactions with its ATP binding site [66]. Hesperetin is an activator of the Akt/PKB pathway in cortical neurons. In contrast, quercetin inhibits the prosurvival Akt/PKB pathways by preventing the activity of PI3K [67].

Many phytochemicals inhibit mTOR signaling, thereby inducing the autophagy pathway [79]. Polyphenols inhibit oligomer synthesis and formation, in addition to preventing tau hyperphosphorylation and aggregation reduction under in vitro and in vivo conditions [80]. Soluble Aβ oligomers along with profibrillar species are produced via the action of rosmarinic acid, myricetin, and curcumin, which reduce the number of toxic oligomers and fibrils [81][82]. Aβ aggregation is inhibited by honokiol, myricetin, and luteolin upon binding to the hydrophobic site of the amyloid pentamer and employed the most prominent Aβ1-42 aggregate inhibition in PC12 cells to protect anti-aggregative properties as well as neuronal toxicity [83]. Numerous phytochemicals involved in the pathogenesis of AD are indicated in Figure 3. Another potential benefit of phytochemicals in AD may include their potential role in tau phosphorylation. Tau oligomers are toxic and cause synaptic dysfunction in AD. Several findings have revealed that hyperphosphorylation of tau can be inhibited by treatment with caffeic acid, altenusin, EGCG, curcumin, and resveratrol [84][85]. Moreover, EGCG inhibits the conversion of tau aggregates into toxic oligomers [86]. In addition, emodin and daunorubicin repress tau aggregation and dissolve paired helical filaments under in vitro conditions [87]. In another study, epicatechin-5-gallate and myrecetin were shown to hinder heparin-mediated tau formation, and EGCG administration in an AD transgenic mouse model controlled the phosphorylation of sarkosyl-soluble tau isoform [88][89].