Dementia is a syndrome that is characterised by the decline of different cognitive abilities. A high rate of deaths and high cost for detection, treatments, and patients care count amongst its consequences. Although there is no cure for dementia, a timely diagnosis helps in obtaining necessary support, appropriate medication, and maintenance, as far as possible, of engagement in intellectual, social, and physical activities. The early detection of Alzheimer Disease (AD) is considered to be of high importance for improving the quality of life of patients and their families. In particular, Virtual Reality (VR) is an expanding tool that can be used in order to assess cognitive abilities while navigating through a Virtual Environment (VE).

Dementia is a clinical disease that is characterised by cognitive and emotional impairments. Common symptoms are the decline of memory, reasoning, language, and perceptual interpretation, which affect daily functioning and the quality of life. Different types of dementia are defined according to specific combination of these symptoms, and Alzheimer’s Disease (AD) is the most common type (62% of the cases) mainly affecting elderly people. However, the reported numbers are also increasing among people under 65 years old in the UK and worldwide [1]. One of the first noticeable symptoms among AD’s patients is the loss of episodic memory and the difficulties of learning new information. As AD progresses, people experience greater memory loss, cognitive impairments, and behavioural changes. Typical problems include wandering and getting lost; being suspicious about family and caregivers; taking longer to complete daily tasks; or, not being able to speak, write, and walk properly [2].

Currently, when Alzheimer’s disease is diagnosed, the neuronal damage is spread enough to make it irreversible [3]. When neurons die, the other neurons do not divide and replace them, as other cells do, so the damage cannot be reversed [2]. Therefore, it is important to detect dementia at its very early stages in order to reduce the deterioration speed [4][5][6]. Early detection is also important, so the patient receives proper treatment and, therefore, increase their quality of life [7].

The cost of dementia is another issue to take into consideration. The worldwide cost of dementia is $818 billion, and it will become a trillion by 2018 [8]. The cost of dementia in the UK estimated in 2013 was 26.3 billion pounds; 4.3 billion were spent on healthcare costs, of which around 85 million were spent on diagnosis [1]. Therefore, it is essential to develop affordable diagnosis and support tools to help limit the increasing cost that is associated with dementia. One of the proposed initiatives is focused on the implementation of e-health (the use of Information Communication Technology (ICT)) solutions to reduce the cost and to make the health systems and solutions universally accessible [9][10][11]. Arief et al. [8] presented the strengths of e-health tools, such as the improvement in accessing health-care services by senior citizens, their cost-effectiveness, and their efficiency in managing health resources.

Alzheimer’s symptoms are studied in order to improve the results of existent approaches or create novel and more accurate diagnosis tools relying on new affordable and publicly available technologies. Alzheimer’s detection methods are classified into two different categories: invasive and non-invasive. Invasive methods require obtaining data from the interior of the patient’s body through procedures, such as lumbar puncture or blood extraction. These invasive methods try to define potential biomarkers that prove to be an accurate indicator of Alzheimer’s [12]. Most of them are not always safe and comfortable for the patient, and are sometimes unbearably painful. On the other hand, non-invasive tests are harmless and more convenient during the diagnosis process.

More recently, virtual environment (VE) and virtual reality (VR) based approaches are considered for AD diagnosis due to the advances in computer technologies and the availability of new devices. Immersive VE technology presents numerous advantages also as research tool in psychology increasing experimental realism and allowing to perform impossible manipulations of the reality [13]. Several studies have demonstrated that VEs can be used for neurophysiological assessment [14][15] and new technologies, such as emerging head-mounted displays, multi-sensorial interaction devices, and three-dimensional (3D) smart technologies can facilitate medical tests and therapies [16]. The aim is to provide more reliable and non-invasive diagnostics at home or in a nursing home environment.

Recently, Virtual Environments (VEs) have started to become part of medical tests and rehabilitation therapies due to the new advances in computer technologies [17]. Many approaches have been introduced to validate the use of virtual reality for neurocognitive assessment. In [18], the authors evaluate learning and memory cognitive abilities on healthy controls while navigating through a virtual environment using a head-mounted VR device. The first step of this experiment consists of showing ten objects that the participant has to memorise. Once memorised, they navigate through five areas of a Virtual Reality city, where they have to find the previously memorised objects. At the end of the experiment, the participants are asked to recall all of the objects and the areas where they have found them. The results are then compared with traditional neurocognitive methods, proving the correlation between them and validating the use of Virtual Environments for memory and learning assessment. The work that is presented in [19] assesses complex attention to healthy subjects (both military and civilian) and examines the ecological validity of virtual reality when using head-mounted VR devices in comparison to the less immersive experience of watching the scenario on a laptop screen wearing headphones. The participants are immersed in three low and three high intensity scenarios and they record psychophysiological information, such as startle eye blink amplitude and heart rate. In those scenarios, they also evaluate participants’ attention by showing a four-digit number in a central position during the first three scenarios and in a random position in the rest. Their results supported that a high level of immersion evokes a stronger physiological reaction than under low immersion conditions.

Cushman et al., in [20], also present a comparative study between a navigation system on VEs and the real world while evaluating Alzheimer’s participants’ navigation aptitudes and proving the ecological validity of VR environments. The navigational assessment test is divided into eight subtests. Firstly, a route demonstration is given in both real and virtual worlds; then, the subtests start. These subtests include route recall from ten landmarks, free recall of ten objects seen on the route, pointing to the location of ten objects from a certain point of the route, route-drawing on a map of the environment, route landmarks recall, photograph recognition, photograph location, and video location and direction. The results of the tests in both real and virtual scenarios were similar, therefore validating the use of Virtual Scenarios for navigation deficit assessment and screening of early AD.

In [21], Parson et al. analyse the appropriate way in order to create neurocognitive interfaces in VEs. In this work, they consider the possible loss of the experimental control that is related to VE fidelity. An increase of VE fidelity means a loss in control, so a balance should be found in relation with the test type. Psychophysiological computing is another interesting concept; this term refers to a technique that consists of monitoring people with a computer in order to create user-tailored applications. Currently, most of the psychophysiological evaluation is obtained after the VR experience, but new advances on the Brain Computer Interface (BCI) will allow for an automated and real time evaluation.

The work that was presented by Tarnanas et al. in [3][16] demonstrates that the use of VEs is beneficial when it comes to early dementia detection. It is possible to improve the results from previous cognitive tests, since floor and ceiling effects are reduced, which results in the creation of tests that can be adapted to the patients’ IQ. Furthermore, it is possible to increase immersion in the task that is in progress. Tarnanas et al. use large screens to display the environment as well as depth sensors in order to recognise the gestures of the patient’s body. This system requires the patient to move to the location where the equipment needed to carry out this test is available, due to the fact that its components are not portable or cost-effective, which makes it unsuitable for e-health applications.

The study conducted by García-Betances et al. in [22] shows the advantages of virtual environments for Alzheimer’s disease. In their work, they analyse the wide range of applications for AD that can be created while using VR. According to their analysis, as shown in Figure 1, the VR systems are classified according to some criteria. First, they consider the intended purpose, such as assessment and diagnosis, rehab and cognitive training, design, and training. Additionally, they classify VR systems that are based on the interaction technique used. Different methodologies are employed (e.g., tasks, games, Instrumental Activities of Daily Living (IADL)) and they are of different types, such as full-immersive, semi-immersive, non-immersive, and passive or active interaction. The authors point out the lack of immersion or interaction in most of the current virtual reality applications. They also mention that most of the approaches should be more affordable and accessible for home and nursing environments. 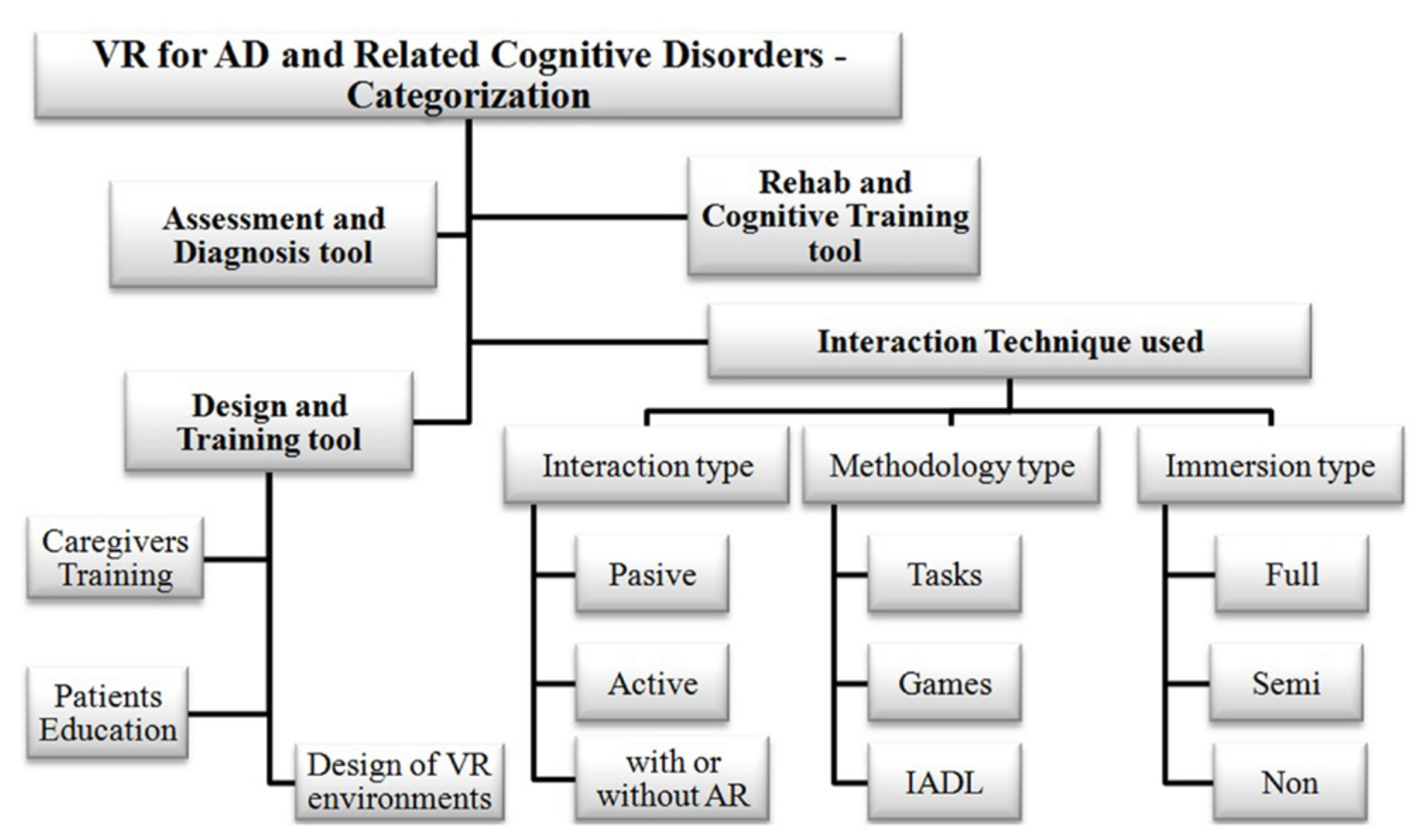