Polyunsaturated fatty acids (PUFAs) have more than one double bond between carbon atoms. Omega(ω) indicates the location of the first carbon double bond, counting from the" end "of the molecule (from the methyl group). Therefore, ω-3 fatty acids have a first double bond on the third last carbon. Those from the ω -6 family at the sixth carbon from the bottom. A of the ω -9 family at the ninth carbon atom from the terminal methyl group to the first C = C bond. The designations n – 3, n – 6, n – 9 are also used. The human body is unable to introduce the double bond further than at the ninth carbon.
PUFAs can be synthesized in mammals and supplied with the diet, with the exception of α-linolenic (ALA) and linoleic (LA) acids, which must be systematically supplied with food. Therefore, they are referred to as Essential Unsaturated Fatty Acids or Exogenous Unsaturated Fatty Acids.

LA and ALA acids are transformed into a family of unsaturated ω-3 and ω-6 acids as a result of elongation and desaturation processes.

The following acids are obtained from ALA: stearidine (18: 4, ω – 3), eicosatetraenoic (20: 4, ω – 3), eicosapentaenoic (20: 5, ω – 3) and docosahexaenoic (22: 6, ω – 3). On the other hand, the family of ω-6 acids (LA) is formed, starting from gamma-linolenic acid (18: 3, ω-6), through dihomo-gamma-linolenic acid (18: 3, ω-6), arachidonic acid (20: 4 ω – 6) and docosatetraenoic (22: 4 ω – 6), to docosapentaenoic acid (22: 5, ω – 6).
In everyday diets, it is advisable to include sources of polyunsaturated fatty acids, which include vegetable oils (linseed oil, avocado, olive and rapeseed oil), fatty sea fish (herring, salmon, mackerel, halibut) and nuts. In the case of oils, attention should be paid whether they have too much ω-6 in relation to ω-3, because then the harmful pro-aggregating and pro-inflammatory effect may outweigh the anti-aggregation and anti-inflammatory effect.

Polyunsaturated fatty acids (PUFAs) are divided into omega-3 (n-3) fractions (with the main synthesis pathway from α-linolenic acid) and omega-6 (n-6), which is synthesized from linoleic acid (LA)[1]. Linoleic acid can be metabolized to n-6 via desaturase, resulting via the biosynthesis of gamma-linolenic acid (GLA), dihomo-gamma-linolenic acid (DGLA), and finally arachidonic acid (AA)[2]. The largest amount of AA, however, is found in phospholipid membranes, competing with n-3 acids for metabolism and with their products for receptors[2][3].The role of omega-6 and the proportions of omega-3/omega-6 are a controversial subject. Higher level of LA and  AA in circulation are dangerous.

The proposed damage mechanism is based on increased inflammation, driven by the conversion of AA into proinflammatory and prothrombotic eicosanoids, such as prostaglandin E2, thromboxane A2 and leukotriene B4. In this cascade, AA is transformed by cyclooxygenase (COX) enzymes[4]. Eicosanoids, mainly epoxyeicosatrienoic acids (EETs) and 20-hydroxyeicosatetraenoic acid (20-HETE), are produced throughout cytochrome P450 (CYP) enzyme activity[5]. However, as a result of AA metabolism mediated by lipooxygenase (LOX) enzymes, including 5-, 8-, 12-, and 15-LOX, from which, in turn, HPETE acids are adequately produced, followed by HETE and oxo-ETE, shown in Figure 1[6]. A strong chemoattractant for basophils, eosinophils, monocytes and neutrophils is 5-oxoETE, 12 HETE. Moreover, 15 HETE stimulates mitogenesis of endothelial cells, increases the activity of granulocytes and lymphocytes.

Two isoforms of the COX enzyme (COX-1 and COX-2) are distinguished. COX-1 participates in basic physiological functions, such as platelet aggregation control, while COX-2 mainly takes part in inflammation and pathophysiological processes[7]. LA acid metabolism (by LOX enzymes) leads to the formation of hydroxyoctadecadienoic acids (HODEs), i.e., 9- and 13-HODE and subsequently oxo-HODE[2]. Both 13-HODE and 9-HODE should be regarded as atherosclerosis biomarkers. Eicosanoids are also formed from the n-6 pathway, which, together with other oxidized fatty acids metabolites, are called oxylipins. The oxylipin presence is correlated with the occurrence of inflammation and the main pathways for their synthesis, comparable with AA, are the COX, LOX, and CYP pathways[8]. Some CYP polymorphisms are associated with many diseases, including cancer and cardiovascular diseases. The CYP4A10 and CYPA12 isoforms are enzymes associated with hepatic and renal biosynthesis of atherosclerotic 20-HETE. In contrast, CYP2J2 is responsible for the formation of EET in extrahepatic tissues, including the heart, kidneys, lungs, and intestines in humans[9]. 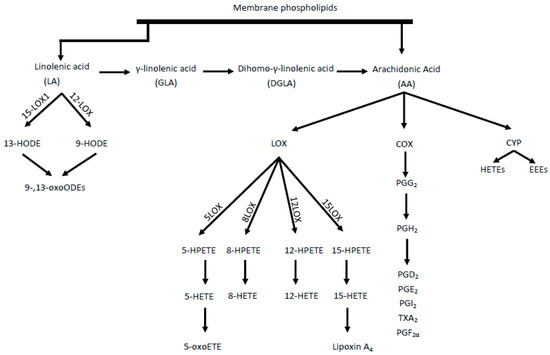