Taxol®, which is also known as paclitaxel, is a chemotherapeutic agent widely used to treat different cancers. Since the discovery of its antitumoral activity, Taxol® has been used to treat over one million patients, making it one of the most widely employed antitumoral drugs.

Taxol®, which has the generic name paclitaxel (PTX), is a secondary metabolite produced by Taxus sp. and, to a lesser extent, by Coniferales Cephalotaxus, Podocarpus gracilior, or Corylus avellana [1][2][3]. The first identification of PTX was carried out by Dr. Jonathan L. Hartwell (National Cancer Institute, NCI) in the 1960s, when a screening program for antitumor agents in the plant kingdom was carried out by the NCI and the U.S. Department of Agriculture, identifying PTX from Taxus brevifolia (T. brevifolia) as a potent anticancer drug [4]. The structure of PTX was published in 1971 and clinical trials began in 1984 [5][6]. The high demand for PTX due to these clinical trials led to a severe depletion of T. brevifolia. Furthermore, the cost of manufacturing PTX from T. brevifolia was 10 times the budget available for the trials. These events led to a race to develop a chemical synthesis route for PTX, which was finally produced in 1994 [7]. However, the method was too complex and expensive, so the NCI decided to leave the work developed until then in the hands of a private company, not being able to bear the costs. The chosen company was Bristol-Myers Squibb (BMS), despite complaints about a private company acquiring the rights to this drug. BMS renamed PTX under the brand name Taxol® and left the term paclitaxel as the generic name. Taxol® global sales have been in the millions since it began to be marketed, reaching 1.5 billion dollars in 2000. However, since then, sales of Taxol® have been declining rapidly to the benefit of other paclitaxel formulations, such as Abraxane® [8]. The price of Taxol® has also been very high. When the use of Taxol as an anti-cancer drug was approved, its price was $986/dose. However, when the BMS patent expired, the price became $150/dose for the generic version and $1000 for the Taxol® version [9]. The Food and Drug Administration (FDA) and the European Medicines Agency (EMA) have approved the use of Taxol® for the treatment of breast, ovarian, and lung cancer, as well as Kaposi’s sarcoma [10]. Although the response rate depends on different factors, including the type of cancer, Taxol®’s response rate has been approximated to be 30% for ovarian cancer and 56% for metastatic breast cancer [11][12]. Over the years, PTX, as Taxol® or alternative formulations, has become one of the most-used agents for treating different types of cancers, especially breast, ovarian, non-small-cell lung carcinoma (NSCLC), Kaposi’s sarcoma, head, and leucopenia cancers. Moreover, PTX is often used as a reference to evaluate the therapeutic benefits achieved with the co-administration of another drug, for example, to simultaneously treat both stromal and tumor compartmentss in pancreatic ductal adenocarcinoma (PDAC) [13][14]. Considering this, Taxol®’s demand has spurred a battle over the most profitable anti-tumor domain in history [5][8][15][16].

2. The Fight against Drug Resistance

In recent years, many studies have focused on the effect of Taxol® in order to improve results among patients. Even though PTX is one of the most effective and frequently used drugs for the treatment of different cancers, its efficiency is limited. Therefore, one of the major drawbacks of Taxol® and derivatives is the acquisition of resistance in many of the patients treated. Tumor suppressor genes (TSGs) are essential genes related to cell division, apoptosis, and DNA repair. Normally, these TSGs prevent abnormal cells from surviving. However, when these genes are inactivated or their expression is reduced, the abnormal cells may grow uncontrollably, thus leading to cancer formation; considering this, they could be important mediators of drug sensitivity. In order to increase the knowledge about PTX resistance, Xu et al. identified 22 TSGs involved in PTX resistance in 2016, representing an excellent inflection point for developing new strategies to reverse chemotherapy resistance [17]. In the same line, Wu et al. carried out a transcriptomic study of PTX-resistant esophageal squamous cell carcinoma (ESCC), in order to identify potential genes and pathways responsible for the PTX resistance. They concluded that carfilzomib—a proteasome inhibitor—could attenuate paclitaxel resistance through activating hypoxia-inducible factor 1 (HIF-1) signaling [18]. Resistance to paclitaxel has been related to different proteins, such as keratin 17 (KRT17) in cervical cancer cells, which may increase cell migration and PTX survival, or fibronectin type III domain-containing protein 5 (FNDC5), which could promote paclitaxel sensitivity by inhibiting NF-κB/MDR1 signaling in NSCLC [19][20].

The multidrug resistance-associated protein 1 (MDR1) and the P-gp have also been demonstrated to be associated with the acquisition of paclitaxel resistance. P-gp and MDR1 are members of the ATP-binding cassette (ABC) family, whose role is to mediate MDR through the efflux of drugs out of the cell, preventing the cellular accumulation of anti-tumor drugs [21]. Paclitaxel is a high-affinity substrate for P-gp and MDR1, which causes a decrease in the bioavailability and induces PTX-resistance [22][23]. Therefore, one of the main strategies for combatting PTX-resistance is the use of MDR1 and P-gp inhibitors [24]. In this sense, recent studies have shown that resistance can be decreased in ovarian cancer with Myricetin or G-quadruplex oligonucleotides, which downregulate (MDR)-1/P-glycoprotein and induce cell apoptosis [25][26].

The receptor tyrosine kinase (RTK) family, which includes EGFR, erbB2, erbB3, and erbB4 (also known as HER2, HER3, and HER4), is an important family of receptors involved in tumorigenesis which have been widely studied as therapeutic targets. The role of RTKs is to activate a multiplicity of intracellular pathways through ATP-mediated auto-phosphorylation. Therefore, inhibitors of receptor tyrosine kinases (TKIs) block their kinase activity, thus avoiding the activation of RTK pathways [27][28]. TKIs have demonstrated an excellent clinical efficacy, although disabling adverse effects and the development of resistance have also been associated with their use. In this way, many studies are being carried out to improve the effects of Taxol® and other PTX derivatives, in order to combat the tumor cell resistance. Mucin 1 (MUC-1), which is a transmembrane glycoprotein overexpressed in cervix tumor cells, has been found to be involved in PTX chemoresistance in an EGFR-dependent manner. The treatment of cervical cancer cells with the EGFR-TKI Erlotinib has shown it to be an adequate alternative when PTX resistance has been acquired [29]. Another study, carried out by Gupta et al., demonstrated that PTX-resistant metastatic breast cells exhibited an increased expression of erbB2 and β-catenin pathways. Penfluridol (PFL) treatment suppressed this erb2 and β-catenin expression, opening up new avenues for PFL/PTX treatment [30]. However, despite these efforts, Aldonza et al. have recently reported that cancer cells with an acquired PTX resistance often develop a tolerance to TKIs as a consequence of PTX treatment [31].

Forkhead protein 1 (FoxM1) has also been correlated with PTX resistance in human pancreatic cancer, through a pathway involving the overexpression of Prohibitin 1 (PHB1) and activation of the FoxM1/PHB1/RAF-MEK-ERK pathway [32]. Moreover, it has recently been demonstrated that Aurora kinase A stabilizes FoxM1 in PTX-resistant breast tumor cells [33]. Therefore, targeting FoxM1 or Aurora kinase A could provide promising alternatives to decrease the resistance to Taxol® developed by many cells. Otherwise, octreotide, which is a somatostatin analogue (SSTA) able to inhibit tumor proliferation through binding to the somatostatin receptor (SSTR), might reserve PTX-resistance. Therefore, it has been suggested that the paclitaxel-octreotide conjugate in ovarian tumor cells decreases PTX chemoresistance through the p38 Mitogen-Activated Protein Kinase (MAPK) signaling pathway [34][35].

On the other hand, metabolic alterations have been shown to play an important role in the sensitivity of cancer cells to anticancer agents [36]. Therefore, the increased expression of lactate dehydrogenase-A plays an important role in Taxol® resistance in human breast cancer cells. In this sense, treating cells with a combination of Taxol® and oxamate (a non-competitive inhibitor of the enzyme lactate dehydrogenase) resulted in a synergistical inhibitory effect on Taxol-resistant breast cancer cells [37]. More recently, Sun et al. have shown that the high PTX resistance demonstrated by lung cancer cells is associated with an increased expression of pyruvate dehydrogenase kinase-2 (Pdk2), which is a key regulator of glycolysis and oxidative phosphorylation [38]. Figure 1 summarizes some of the proposed mechanisms, but definitely does not cover them all. 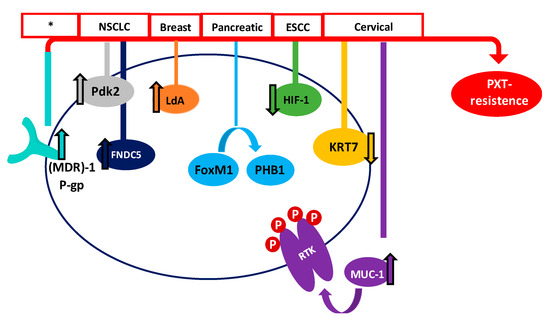 Figure 1. Main proposed mechanisms of PTX survival in different cancers. Red boxes show the type of cancer where the mechanism has been proposed (* many types of cancer).

It is also worth highlighting the alterations in the dynamics of microtubules and tubulin, which may influence the binding of the anti-tumor agent [39]. Therefore, an altered expression of tubulin isotypes is considered a prognostic marker of chemotherapy drug resistance and survival [40][41]. In fact, many studies have shown the expression of different α and β tubulin isotypes in cancer cells. Moreover, the isotype expression depends on the type of tumor [40]. Therefore, high levels of αIIb tubulin in hepatocellular carcinoma; βI in ovarian cancer and NSCLC adenocarcinoma; βII in lung adenocarcinoma; βIII in colon cancer, uterine serous carcinoma, and melanoma; and βV in NSCLC, are associated with a resistance to PTX [42][43][44][45][46][47][48]. On the other hand, a relationship between mutations and post-translational modifications found in β-tubulin and resistance to anti-tumor agents has also been suggested, although further research is necessary in this area [49][50][51].

Other ways to combat the resistance of cancer cells to existing drugs include the search for new agents with cytotoxic properties and the anticipation of the effectiveness of the treatments in each patient. Therefore, the search for new natural compounds with antitumor activity and the co-release of PTX with other natural compounds such as flavonoids or polyphenols also appears to be a promising alternative [52][53][54][55]. Another way to improve current cancer (and other disease) treatments is to predict the effectiveness for each patient before scheduling their treatment. In this way, Ben-Hamo et al. observed that the sequence of the Bcl-2 anti-apoptotic protein might act as a PTX chemoresistance indicator. They found that patients showing a single-nucleotide variant in the Bcl-2 sequence may be more resistant to PTX. Therefore, previous knowledge of Bcl-2 genomic sequences could help to improve patient survival [56]. In a similar way, the methylome and miRNome of breast cancer cells could be used as molecular signatures to predict the paclitaxel response [31]. Moreover, recently, it has been demonstrated that peripheral neuropathy (PN), which is a common adverse effect induced by PTX in patients with breast cancer, could be predicted by miRNA451a expression [57].

drug cancer cell death
© Text is available under the terms and conditions of the Creative Commons Attribution (CC BY) license (http://creativecommons.org/licenses/by/4.0/)
Table of Contents
Hide
Like (0)
Dislike (0)
Download