This entry focuses on lignans, a non-flavonoid polyphenolic class found in plant foods for human nutrition, recently studied as potential modulators of the gut-brain axis. In particular, gut bacterial metabolism is able to convert dietary lignans into therapeutically relevant polyphenols (i.e., enterolignans), such as enterolactone and enterodiol. Enterolignans are characterized by various biologic activities, including tissue-specific estrogen receptor activation, together with anti-inflammatory and apoptotic effects. The variability in enterolignans production by the gut microbiota is strictly related to both bioaccessibility and bioavailability of parent lignans through the entire gastrointestinal tract.

Lignans have been widely studied due to their steroid-analogous chemical structure, being recognized as phytoestrogens, and possessing various biological properties, including anti-inflammatory and antioxidant properties[1][2]. Additionally, epidemiological studies observed that lignans decrease the risk of cardiovascular disease[3].

The presence of lignans in the plant kingdom follows a similar pattern of distribution to other phenolic compounds. There are particularly rich dietary sources of lignans, such as oilseeds (flaxseed, sesame, linseed, and sunflower), whilst other foods present moderate to low amounts[4]. Nevertheless, dietary surveys have observed that whole grains (especially rye), legumes, fruits, vegetables, nuts, and some beverages such as tea and coffee, can be considered good dietary sources of these compounds[5][6]. Starting from the previous considerations, it seems clear that the characteristics of the diet will define the degree of exposition to plant lignans. Due to their large occurrence in foods, the most studied compounds are secoisolariciresinol, matairesinol, lariciresinol, pinoresinol, medioresinol, syringaresinol, and sesamin, which are predominantly present as glucosides as secoisolariciresinol diglucoside and pinoresinol diglucoside[4].

As widely reviewed in the scientific literature[7], lignans originate from cinnamic acid derivatives, which are biochemically related to the metabolism of phenylalanine. In particular, according to the incorporation of oxygen within the pattern of cyclization, lignans can be divided into eight subclasses, namely dibenzylbutyrolactol, dibenzocyclooctadiene, dibenzylbutyrolactone, dibenzylbutane, arylnaphthalene, aryltetralin, furan, and furofuran lignans. The nutritional significance of lignans is unknown. Although lignans are not classified as dietary fibers, they share some of the chemical characteristics of lignin (a large plant polymer characterizing the cell wall), which is an insoluble fiber. Overall, the comprehensive database about the phenolic composition of foods, namely, Phenol-Explorer, reports 53 lignans (including both parent compounds and large intestine metabolites). In this regard, the plant lignans most commonly distributed in foods are reported to be lariciresinol, matairesinol, pinoresinol, and secoisolariciresinol. Several other lignans characterize plant foods, including medioresinol (such as sesame seeds, rye, and lemons), syringaresinol (in grains), sesamin, and the lignan precursor sesamolin (in sesame seeds). Other lignans found in foods but not often quantified include arctigenin, cyclolariciresinol (isolariciresinol), 7′-hydroxymatairesinol, and 7-hydroxysecoisolariciresinol. Some cyclolariciresinol occurs naturally and a part arises from lariciresinol during extraction and analysis under acidic conditions. The most common lignan structures and major food sources are presented in Table 1.

Table 1. Most common lignans in plant foods, together with their structure, class, and major sources, according to the comprehensive Phenol-Explorer database[4].

3. Intraindividual and Interindividual Variability in the Conversion of Plant Lignans

In an attempt to explore the gut transformation of plant lignans into enterolignans (namely enterodiol and enterolactone), both intraindividual and interindividual differences in the conversion rate, maximal yield, and pattern profile need to be carefully considered. Diverse intraindividual metabolic capacities are mainly associated with the chemical structure of the precursor and/or the matrix characteristics of the plant lignan source. However, exactly defining the effectiveness of such conversion, according to the type of lignan molecule, is a difficult task due to the inconsistency of results. Nonetheless, both in vitro[8] and in vivo[9] studies reported that the catabolic transformation of secoisolariciresinol (SECO) and mataireisnol (MAT) was observed to be greater than the other parent lignans and, in turn, that aglycones are more efficiently metabolized than diglucosylated derivatives. Except for MAT that generates enterolactone (EL) but not enterodiol (ED), the contribution of each plant lignan to the whole pool of ED and EL is not entirely clear[8].

Also, wide interindividual variability in the magnitude range and profile of enterolactone is a common observation in experimental and observational studies. Idiosyncrasy explains part of the individual physiological responses, but other aspects could contribute to understanding these deviations. Along with diet, the capacity of gut microbiota to metabolize non absorbed plant lignans determine the coexistence of different phenotypes: low, middle, and high enterolignan producers[5][6], although other factors including genetics, sex, and age could also contribute to metabolic differences. It was suggested that microbial dehydrogenation of ED to generate EL is a crucial step in the colon metabolism of plant lignans that could explain major variation in enterolignan production[10]. The shift toward a major production of EL is desirable because this metabolite showed a stronger association with health benefits than ED[11].

In summary, alternative and simultaneous branches of metabolic pathways to transform non absorbed plant lignans into enterolignans do exist. These pathways are mainly defined by bacterial demethylation, reduction, dehydroxylation, and dehydrogenation; nevertheless, the main final metabolites are ED and EL. However, besides the intrinsic characteristics of individual lignan molecule, diet, and gut microbiota (conformation and activity) are dominant factors affecting the amount and profile of mammalian enterolactone produced in the colon. Therefore, in the context of plant lignans colon metabolism, it was observed great interindividual differences, which has led to the identification of different phenotypes, which can be affected by age and sex, according to the capacity to produce enterolignan.

4. Modulation of Gut Microbiota by Enterolignans

Regarding the transformation of lignans into enterolignans (i.e., enterodiols and enterolactones), despite the huge number of bacteria inhabiting gut microbiota, only a few species have been identified as involved in such conversion[12]. Besides, the enzymes responsible for this transformation remain unknown[13]. Although mucosal enzymatic activities and chemical hydrolysis in the stomach may influence the bioavailability of lignans, the mechanisms underlying these processes are still under investigation. Several biochemical steps are involved in plant lignan transformation into enterolignans and the consortia of bacteria share metabolic intermediates. For example, bacteria utilize four sequential reactions to convert secoisolariciresinol diglucoside (SDG) to enterolactone (EL): O-deglycosylation, O-demethylation, dehydroxylation, and dehydrogenation[14]. Despite the in vitro nature of the approach used, interesting conclusions concerning host-related metabolic capability are reported in the literature.

However, to date, no microorganisms have been identified that can completely metabolize the plant lignan SDG to EL. Thus, in a complex microbial community, cooperation between different groups of bacteria led to the production of EL. As an example, Eggerthella lenta is not able to directly convert SECO to EL, since it specifically converts an intermediate compound, the 2,3-bis-(3,4-dihydroxy-benzyl)butane-1,4-diol, to this final product. The entire conversion can be conducted by E. lenta when it is co-cultured with Blautia producta. Indeed, this last species is able to produce the aforementioned intermediate that can be used as a substrate by E. lenta. We could speculate that such a relationship proved using an “in vitro” study could explain the production of EL also in the intestinal environment. Concerning in vivo studies, little information is available in the scientific literature. Of interest, in gnobiotic rats, the infection with Clostridium saccharogumia, E. lenta, B. producta, and Lactonifactor longoviformis and the administration of plant lignans SECO allow one to investigate the production of EL and ED. In the urine of these rats, ED and EL were detected, but not SECO. On the contrary, in the urine of not colonized animals, SECO was found but not its bioactive enterolignans[15]. These observations confirm the role of bacteria in SECO conversion and the “in vitro” studies. In humans, the gut microbiome composition of young healthy (25–30 years) and premenopausal women was assessed after incubation in batch in the presence of an oilseed mix. The EL production increased in young women, whereas an increase of ED was detected in premenopausal subjects. Differences in Clostridiaceae, Klebsiella sp. and Collinsella sp. were observed. In particular, Clostridiaceae appeared higher in premenopausal volunteers than in the younger, thus suggesting the role of this family in lignans degradation. Overall, it is important to highlight the in vitro nature of the most important findings in this field, thus representing a strong limitation when translated to in vivo applications.

5. Potential of Enterolignans as Health-Promoters and Modulators of the Gut-Brain Axis

In the last years, several research works demonstrated that dietary polyphenols could have beneficial effects in cognitive functions, by acting against oxidative stress and inflammatory injury[16]. Overall, biotransformation of polyphenols is a pivotal step to obtain metabolites active in brain, through a set of microbiota-related reactions occurring in the gut[17]. In this regard, evidence suggests that polyphenols exert beneficial effects acting through multiple pathways involved in oxidative/inflammatory stress signaling and leading to the expression of antioxidant enzymes neurotrophic factors, and cytoprotective proteins. All these processes contribute to maintaining brain homeostasis.

A recent study[16] using different neuronal systems, reported that metabolites from dietary polyphenols exert neuroprotective effects after reaching the brain by crossing the blood-brain barrier. Additionally, it was suggested that mammalian enterolignans play a prominent role, even higher than their precursors, against neurodegeneration. That is why considerable research effort was devoted to a complete understanding of the colonic transformations of plant lignans, leading to the generation of ED and EL, as explained in the previous sections. Polyphenols' indirect actions involve mechanisms that improve peripheral cerebrovascular health. Several studies in humans indicated that dietary polyphenols improve vasodilatory response and increase levels of circulating nitric oxide (NO) species that are essential in the control of vascular tone, vasodilation, and blood flow in the body and in the cerebral circulation.

Gut microbiota can interact with a central nervous system through different mechanisms and pathways, such as the neurosystems implicated in stress and stress-related disorders (sympathetic and parasympathetic branches of the autonomic nervous system and neuroendocrine and neuroimmune systems)[18][19]. The communication between these pathways occurs through the vagus nerve, specific metabolites, neurotransmitters, and brain neurotrophic factors[20]. Gut microbiota is able to synthesize neurotransmitters, and thus microbiota homeostasis can impact complex neurodegenerative disorders. Examples are short-chain fatty acids (SCFAs), tryptophan, GABA, and a brain-derived neurotrophic factor (BDNF)[21]. Specifically, the connection between gut microbiota and the central nervous system, the so-called gut-brain axis, plays an important role in stress response and it is widely recognized as the neuroendocrine system. Communication between gut and brain involves multiple overlapping pathways: the enteric nervous system and the neuroimmune and the neuroendocrine systems[22]. By interacting with the nervous, endocrine, and immune systems, gut microbiota can influence both, directly and indirectly, the brain functions. Also, it is emerging that the regulation of microbiota composition can be realized using natural bioactive molecules such as polyphenols derived by plants, suggesting that polyphenols could be used to restore the altered brain functions that characterize neurodegenerative diseases.

Flaxseed-derived lignans,  (SDG) and pinoresinol diglucoside, are metabolized by the intestinal bacteria, Ruminococcus species, in humans, to give the enterolignans (+)-dihydroxyenterodiol and (+)-enterolactone[23]. This gut bacterial species accomplishes both deglycosylation and demethylation of plant-based lignans to give human lignans that are of broad physiological effects. EL has been related to the anticancer activity. For example, it was shown that EL inhibits the growth of prostate cancer cell lines in vitro and in vivo, through a caspase-dependent pathway[24]. EL and SECO are inhibitors of carbonic anhydrase[25] and acetylcholinesterase and butyrylcholinesterase, and thus may afford neuroprotection. In this regard, Alzheimer’s disease (AD) patients show lower levels of acetylcholine in the neuronal synapses, thus leading to memory loss phenomena. Therefore, through the inhibition of the acetylcholinesterase, these lignans may prevent memory loss in AD patients, hence providing a nutritional strategy to complement the use of synthetically derived acetylcholinesterase inhibitors.

Finally, a schematic representation of the gut microbiota–brain interaction when considering lignans and their metabolites is provided in Figure 1. 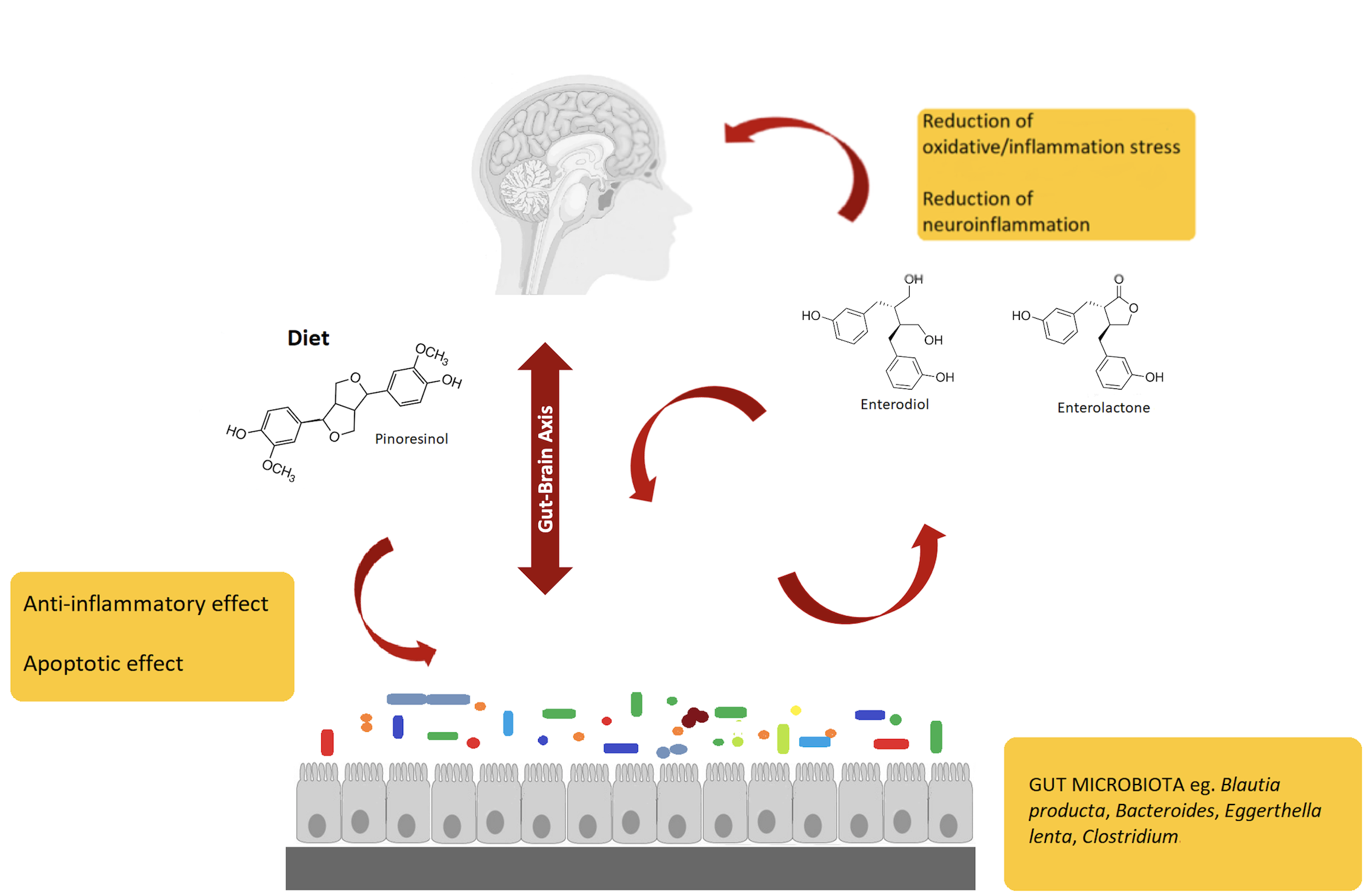