In diabetic peripheral neuropathy (DPN), metabolic disorder by hyperglycemia progresses in pe-ripheral nerves. In addition to the direct damage to peripheral neural axons, the homeostatic mechanism of peripheral nerves is disrupted by dysfunction of the blood–nerve barrier (BNB) and Schwann cells. The disruption of the BNB, which is a crucial factor in DPN development and ex-acerbation, causes axonal degeneration via various pathways. Although many reports revealed that hyperglycemia and other important factors, such as dyslipidemia-induced dysfunction of Schwann cells, contributed to DPN, the molecular mechanisms underlying BNB disruption have not been sufficiently elucidated, mainly because of the lack of in vitro studies owing to difficulties in establishing human cell lines from vascular endothelial cells and pericytes that form the BNB.

In peripheral nerve tissues, where glucose is taken up by non-insulin-dependent glucose transporters, most of the glucose is transported from blood vessels to peripheral nerve tissues, according to the concentration gradient. Hyperglycemia directly contributes to the elevation of intracellular glucose concentrations. In a hyperglycemic state, the polyol metabolic pathway is enhanced via increased activity of aldose reductase in peripheral nerve tissues [4]. Edema, degeneration, and ischemia of nerves are considered to occur via various mechanisms, such as osmotic stress, abnormal protein kinase C activity, increased oxidative stress, accumulation of advanced glycation end products (AGEs) due to impaired glucose metabolism, and decreased production of nitric oxide [5]. Notably, disruption of the blood–nerve barrier (BNB), a strict barrier system that stabilizes the internal environment of peripheral nerves, has been increasingly reported to be deeply involved in the onset and exacerbation of DPN with in vitro BNB models.

2. Anatomy of the BNB and Peripheral Nerves

Peripheral nerve tissues mainly compose the BNB, Schwann cells, and nerve axons. The BNB is mainly localized in the microvessels of peripheral nerves within the peripheral neural parenchyma (endoneurium) and consists of vascular endothelial cells bound by tight junction proteins, pericytes attached to the outer side of the vascular endothelial cells, and basal laminae covering these two types of cells. Like the blood–brain barrier (BBB) in the central nervous system, the BNB acts as a wall preventing the influx of harmful substances circulating in the blood into peripheral nerves [6]. The BBB is mainly composed of brain microvascular endothelial cells, pericytes, astrocytes, and the two distinct basement membranes. The BNB has a similar structure to the BBB, with the exception of lacking astrocytes (Figure 1A). It had previously been thought that the BNB was leaky compared to the BBB, as a result of the lack of astrocytes, but several reports showed that the BNB has a barrier function as robust as that of the BBB [7][8] and acts as an interface to maintain the microenvironment in peripheral nerves by expressing transporters for the transportation of nutrients, such as glucose and amino acids, as well as for the excretion of waste products [6][9]. The basement membrane in the BBB and BNB consists of a mixture of extracellular matrix proteins including collagen IV and laminin [10]. Laminin is a trimeric molecule comprising α-, β-, and γ-subunits and shows specific expression in the central and peripheral nervous systems [10]. We showed that laminin α4 was hardly expressed in the BNB compared with the BBB (Figure 1B), whereas α5, β1, β2, and γ1 were widely expressed in the BBB and BNB [11]. In experimental autoimmune encephalomyelitis, a relevant preclinical model of multiple sclerosis laminin α4 facilitates the transmigration of T lymphocytes across the BBB because integrin α6β1, a major counterpart receptor of laminin α4, is strongly expressed on all T lymphocytes [12]. These results showed that T lymphocytes, with integrin α6β1, migrated across the BNB through other factors (except for laminin α4 in peripheral autoimmune neuropathies), suggesting the BNB has its own barrier system because of a lack of laminin α4 in the BNB. On the other hand, laminin α5 plays a key role in the maintenance and repair of BBB after hypoxic injury and inflammation [13]. Therefore, we hypothesized that BNB-specific laminin expression without laminin α4 might promote almost the same properties as a barrier system as those with the BBB.

In contrast, Schwann cells surround the axons of neurons to form a myelin sheath, a structure responsible for saltatory conduction. Together with pericytes, Schwann cells are involved in providing nutrients to neurons and play a role in maintaining the microenvironment [14]. 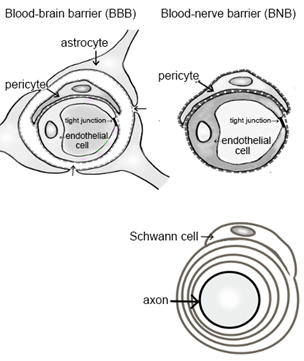 2.1. Establishment of BNB-Forming Cell Lines and Functions of Pericytes 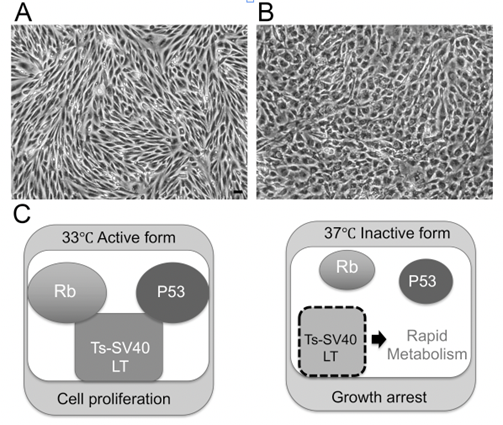 In the BBB, endothelial cells function as an important barrier; however, they alone cannot maintain the physiological barrier, and continuous “crosstalk” between cellular and non-cellular components surrounding these cells is considered essential for maintaining the barrier. Astrocytes have been recognized as important BBB regulators [21], and in recent years, pericytes have also been described as important BBB regulators [22][23]. In 2010, Armulik et al. reported transcytosis in BBB-forming endothelial cells, leading to increased permeability of the BBB in pericyte-deficient mice. Since cells such as astrocytes are not present in the BNB, it is assumed that pericytes play an important role in regulating the BNB. Using BNB-forming cell lines, we previously demonstrated the following results: (1) pericyte culture supernatant increased the electrical resistance (trans-endothelial electrical resistance) and decreased the permeability of 14C-labeled inulin in endothelial cell lines originating from the BNB; (2) pericyte culture supernatant increased the expression of tight junction-related proteins (claudin-5, occludin) in endothelial cell lines originating from the BNB; (3) pericytes secrete physiologically active substances (angiopoietin-1 (Ang-1), vascular endothelial growth factor (VEGF), basic fibroblast growth factor (bFGF), and a neurotropic factor (glial cell line-derived neurotrophic factor, GDNF)); (4) Ang-1 and VEGF secreted by pericytes decreased the expression of claudin-5, leading to a tendency to decrease BNB function; and (5) bFGF and GDNF, in contrast, increased the expression of claudin-5 [24]. These findings demonstrate that pericytes play an important role as BNB regulators.

2.1.3. Construction of a New In Vitro BNB Model

BNB plays crucial roles in the maintenance of peripheral nervous system homeostasis and in the pathogenesis of DPN. The BNB components (pericytes and basement membrane such as laminin α5, β1, γ1) have directly contact with the endothelial cells and participate the regulation of each barrier function. However, the mechanism of this regulation still remains unknown because of the non-existence of the in vitro human BNB model in which these components can directly come in contact with endothelial cells (Figure 3A,B). Recently, we constructed a new in vitro human BNB model that incorporated a multi-culturing system of these BNB components using the UpCell technology of Nunc (Figure 3C). In this model, firstly, hPCT-BNBs were cultured on the luminal side of the insert-membrane (Figure 3D). Secondly, hEC-BNBs were cultured in an UpCell dish with a coated temperature-responsive polymer, which can achieve sheet-like detachment of confluent cells and extracellular matrix by temperature-shifting to 20 °C. Then, sheet-like detachment of confluent hEC-BNBs were transferred onto the hPCT-BNBs. Confocal 3D analysis with live staining of each cell line showed that the multi-cultured insert constituted the two-layer structures, which consisted of hEC-BNBs and hPCT-BNBs. The layer of hPCT-BNBs was in direct contact with the hEC-BNBs (Figure 3E).

Figure 3. Construction of a new in vitro BNB model. (A) An ideal in vitro human BNB model. The endothelial cells form the monolayer. The BNB components (pericytes and basement membrane) are in direct contact with the monolayer of endothelial cells on the tissue culture insert. (B) An actual in vitro human BNB model. If endothelial cells are forcibly multi-cultured on the layer of pericytes, they disorderly laminate and cannot form the BNB due to the difference in growth speed of each cell line. (C) The Nunc UpCellTM technology. Temperature-responsive polymer is immobilized on the surface of the UpCellTM dish. The polymer-grafted surface shows reversible hydrophobic and hydrophilic properties across the threshold temperature of 20 °C. The cell-sheet is detached from the dish without harmful enzymes (e.g., trypsin or dispase) and attached to the hygroscopic sheet to transfer. (D) Multi-culturing systems. hPCT-BNBs were cultured on the luminal side of the cell culture insert membrane with 3µm pores. After flipping the cultured insert, hPCT-BNBs were cultured on the luminal side. hEC-BNBs were cultured in an UpCell dish. After incubation at 20 °C, the sheet of confluent hECs was detached and transferred onto the hPCT-BNBs. (E) Confocal 3D analysis with live staining of hEC-BNBs and hPCT-BNBs. Multi-cultured insert constituted the two-layer structures, which consisted of hEC-BNBs and hPCT-BNBs. The layer of hPCT-BNBs was close to the hEC-BNBs. Bar = 5 µm.