Streptococcus gordonii, a Gram-positive bacterium, is a commensal bacterium that is commonly found in the skin, oral cavity, and intestine.  It is also known as an opportunistic pathogen that can cause local or systemic diseases, such as apical periodontitis and infective endocarditis. S. gordonii, an early colonizer, easily attaches to host tissues, including tooth surfaces and heart valves, forming biofilms. S. gordonii penetrates into root canals and blood streams, subsequently interacting with various host immune and non-immune cells. The cell wall components of S. gordonii, which include lipoteichoic acids, lipoproteins, serine-rich repeat adhesins, peptidoglycans, and cell wall proteins, are recognizable by individual host receptors. They are involved in virulence and immunoregulatory processes causing host inflammatory responses. Therefore, S. gordonii cell wall components act as virulence factors that often progressively develop diseases through overwhelming host responses.

Streptococcus gordonii is commensal, non-pathogenic bacterium that is present in the human body, including the skin, oral cavity, upper respiratory tract, and intestine. It mainly resides on mucosal surfaces, such as the oral cavity, but also live in water, soil, plants, and food [4][5]. S. gordonii, a part of the α-hemolytic (viridans) sanguinis group, primarily inhabits the oral cavity of humans and animals [6]. However, it is also an opportunistic pathogen and can cause a variety of infectious diseases (Figure 2). Recently, metagenomic next-generation sequencing analysis showed that S. gordonii exists in patients with apical periodontitis or caries and the heart valves of patients with infective endocarditis [7][8][9]. In fact, S. gordonii, an initial colonizer on the tooth surface, can co-aggregate with several other oral microorganisms, contributing to the development of periodontal disease and caries [10]. S. gordonii can enter the blood stream by oral bleeding, leading to endocarditis [6]. Furthermore, S. gordonii binds to the cell surface of various host cells, contributing to the initiation of diseases through the inflammatory responses [11][12]. 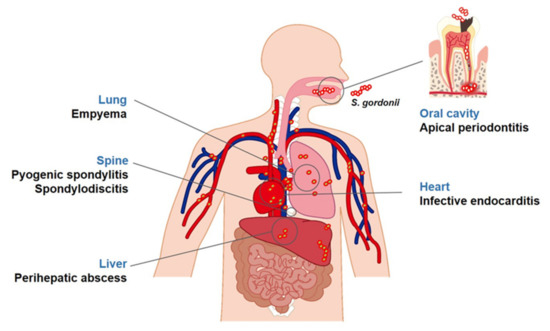 Figure 2. Diseases associated with S. gordonii. S. gordonii, a commensal bacterium, is found in areas of the human body, such as the oral cavity and skin. It is also an opportunistic pathogen associated with several diseases. In the oral cavity, S. gordonii is known to be closely associated with apical periodontitis. In addition, it can smear the blood stream during oral trauma and tooth extraction and disperse into various organs potentially causing systemic diseases including endocarditis, empyema, perihepatic abscesses, pyogenic spondylitis, or spondylodiscitis.

The bacterial cell wall plays a crucial role in the survival and growth of bacteria [13]. In Gram-positive bacteria, the cell wall is composed of thick peptidoglycan (PGN) and various components including lipoteichoic acid (LTA), wall teichoic acid (WTA), cell wall-anchoring glycoproteins, and lipoproteins [14]. Cell wall components can be recognized by host receptors such as pattern recognition receptors (PRRs), which initiate host innate immune responses [14]. S. gordonii expresses cell wall proteins, including Streptococcal surface protein (Ssp) A, SspB, collagen-binding domain protein (CbdA), and serine-rich repeat (SRR) glycoproteins, such as gordonii surface protein B (GspB) and Hs antigen (Hsa) [15][16]. The cell wall proteins of S. gordonii easily adhere to platelets, erythrocytes, monocytes, and dendritic cells (DCs) that could lead to acute immune responses in humans [16][17]. Therefore, understanding how cell wall components of S. gordonii interact with host cells is required not only to determine its entire pathogenesis but also to apply for the treatment and prevention of S. gordonii-mediated diseases.

Nowadays, a large number of therapeutics are available to avoid S. gordonii-induced oral and systemic diseases. For example, several antibacterial agents, such as fluorides, chlorohexidine (CHX), and antibiotics, have been widely used to regulate bacterial growth and infections [18][19][20][21]. However, those conventional antibacterial agents can affect bacterial viability or growth, imposing higher selective pressure that adversely increases the possibility of resistance development [22]. In addition, once bacterial biofilm is formed, the therapies are difficult to function properly due to reduced bacterial sensitivity [23]. Therefore, novel therapeutic strategies that target major virulence factors, virulence-mediated pathways, and biofilm formation could be a promising alternative to conventional therapies such as antibiotics.

As mentioned previously, it is well-known that S. gordonii binds to human platelets through the surface proteins Hsa and PadA, which is considered as a crucial step for infective endocarditis [24][25]. Based on this, one study revealed that antibodies targeting Hsa and PadA could delay or even inhibit the platelet aggregation of S. gordonii [26]. Several authors suggest that using these antibodies is likely to be a novel S. gordonii therapeutic strategy [26]. However, no follow-up studies have been made towards the development of S. gordonii-specific vaccines or treatments. Therefore, more research should be performed in various ways, as suggested in the following.

There are many conventional methods to regulate biofilm. Especially for oral biofilm, physical removalby tooth brushing and scaling, is one of the most effective strategies to disrupt the biofilm. Several studies have demonstrated that tooth brushing results in an attenuation of plaque levels [27][28]. In addition, many other studies have revealed that various techniques of scaling, such as hand and ultrasonic scaling, laser scaling, and chemical scaling, have been used to control plaques [29][30].

S. gordonii and other oral Streptococci are well-known initial colonizers on tooth surfaces since they generate abundant cell wall adhesins interacting with various types of cells and tissues [35][36][37]. Therefore, targeting such surface colonization by disrupting the adherence of S. gordonii could likely be an effective therapeutic strategy against S. gordonii infections. The target candidates for these therapies can be SRRs and cell wall proteins because they are the major binding factors of S. gordonii. For example, the attachment and internalization of S. gordonii to epithelial cells occurs with SspA and SspB (antigen I/II family) [38]. The SRR adhesins of S. gordonii such as GspB are important for biofilm formation and bacterial aggregation on the surfaces [39]. Additionally, CshA, a multifunctional fibrillary adhesin, binds to host fibronectin and mediates the colonization of S. gordonii [11]. Therefore, the development of agents that can block these proteins can be an effective way to inhibit bacterial adherence and subsequent infections.

Using small molecules that suppress quorum sensing-mediated bacterial communication is in the spotlight as a novel therapeutic strategy for regulating biofilm. By using quorum sensing inhibitors, it is expected biofilm maturation can be easily regulated and bacterial self-protection attenuated from antimicrobial agents furnished by a mature biofilm [40][41]. Multiple approaches could be taken for inhibiting quorum sensing. The most promising approach to regulate quorum sensing involves targeting the S-ribosylhomocysteine lyase (LuxS)/autoinducer-2 (AI-2) quorum sensing system, one of the major bacterial communication systems of S. gordonii [42][43]. Therefore, using quorum-sensing inhibitors associated with LuxS/AI-2 could be an effective alternative to conventional therapies.

Promoting biofilm dispersion is another attractive approach for specific therapies against biofilm-mediated diseases, which can contribute to overcoming bacterial resistance mechanisms [44]. Several studies have revealed that bacterial LTA has an anti-biofilm effect, such as inhibiting biofilm formation, disrupting preformed biofilm, and consequently increasing susceptibility to antibiotics [45][46][47]. However, conversely, planktonic bacteria after biofilm disruption will likely disperse into the entire body and may cause issues in other sites of the host. Therefore, using conventional antibiotics together with LTA would be an effective way for the complete removal of infected microbes [44].

During bacterial infection, host cells recognize the invaded bacteria through PRRs and produce inflammatory mediators, such as antimicrobial peptides, immunoglobulin (Ig), and nitric oxide [14]. Some studies have revealed that inflammatory mediators can directly inhibit biofilm formation. For instance, human β-defensin, which is an antimicrobial peptide, decreases not only single species bacteria biofilm but also multi-species bacteria biofilm through the promotion of bacterial cell death [48][49]. In addition, among the Ig family, only secretory IgA, which is abundant in the oral cavity, effectively inhibits bacterial biofilm formation [50]. On the other hand, nitric oxide also inhibits biofilm formation by triggering bacterial dispersion [51]. Therefore, the activation of host cells to produce inflammatory mediators could be one of the alternative strategies for removing bacterial biofilm.

Since lipoprotein-deficient S. gordonii remarkably reduces the induction of inflammatory responses [52], targeting lipoproteins can be one of the therapeutics used against S. gordonii infections. Lipoprotein structures react sensitively to changes in the environment. For example, S. aureus SitC lipoproteins usually exist in the diacyl form under acidic conditions [53]. In cases of S. pneumonia, lipoprotein-based vaccines and antibodies are being developed [54]. Pneumococcal lipoproteins such as pneumococcal surface adhesion A (PsaA), histidine triad protein (Pht) D, PhtE, PhtA, and PhtB are identified as the antigenic regions within Pneumococcal proteins. PsaA, in particular, has been shown to be immunogenic [55]. It has been reported that anti-PsaA monoclonal antibodies efficiently protect against S. pneumonia infections [56]. Therefore, lipoproteins of S. gordonii also can be a potential vaccine candidate.

In general, it is well known that LTA is critical for cell division and growth. The binding of LTA to TLR2 triggers the host innate immune response. Notably, the platelet-activating factor receptor (PAFR) is essential for LTA-induced mucin gene expression in epithelial cells [57]. The inhibition of PAFR attenuates the LTA-induced expression of pro-inflammatory cytokines and chemokines but does not affect LPS-induced pro-inflammatory cytokines and chemokines [58][59]. These reports suggest that PAFR can be one of the potential targets against Gram-positive bacterial infections. Anti-LTA monoclonal antibodies have been reported to improve mice survival rates in methicillin- or vancomycin-resistant S. aureus-induced sepsis models [60]. Human serum anti-WTA IgG induces the opsonophagocytosis of S. aureus by PMNs [61]. In addition, Congo Red is a selective inhibitor for the S. aureus LTA synthase of S. aureus, which is thought to be a potential drug target against Staphylococcal infections [62]. However, because Congo Red is highly toxic [63], it would be desirable to use its molecular action mechanisms for the development of potential therapeutics. A positively charged molecule such as antimicrobial peptides like β-defensins may mask the immunostimulating effect of LTA by binding to LTA’s negative charge. Likewise, it is expected that specific molecule targeting LTAs or WTAs of S. gordonii can be developed as a therapeutic agent.

Since PGN is predominantly found in the bacterial cell wall, β-lactam antibiotics, such as penicillin, are used to induce bacterial cell death through blocking the linkage of PGNs [64]. In addition, vancomycin, an actinobacteria-derived glycopeptide, also inhibits the synthesis of PGNs by preventing transpeptidase and transglycosylase activities [65]. However, these traditional antibiotics can cause the emergence of antibiotic-resistant bacteria. Therefore, the discovery of new cell wall inhibition methods without promoting bacterial resistance has been investigated in recent studies. For example, Ling et al. reported that teixobactin, a new antibiotic, inhibits Gram-positive bacterial cell wall synthesis by binding to precursors of PGN or WTA [66]. Autolysins can be used as antimicrobial agents for breaking PGN bonds [67]. Furthermore, the use of bacteriophages instead of antibiotics is a renewed alternative strategy for the clearance of bacteria on lesions. Bacteriophages have endolysins or lysins that specifically target bacteria and break down the PGN bonds [68]. It has been reported that infective endocarditis was treated with lysins applied to the lesions [69]. Interestingly, PGN fragments can be released through the process of PGN breakdown and then be recognized by host cells through their NOD1 or NOD2 receptors [70]. The recognition of PGNs by NOD1 or NOD2 receptors triggers immune responses [71]. Therefore, PGN-specific receptors can be used as molecular targets for the clearance of S. gordonii through the activation of host immune cells.