Nanocellulose can be obtained from cellulose through a series of chemical or physical treatments. Cellulose is a semi-crystalline polysaccharide [(C6H12O5)n] consisting of D-glucopyranose units joined by β-(1-4)-glycosidic linkages (shown in Figure 1), and the degree of polymerization can be around 10,000 [1][2][3]. Cellulose can be extracted from plants (e.g., hemp, flax, and jute) and woods and also can be synthesized by algae, tunicate, and bacteria [4]. It exists in seven allomorphs (cellulose Iα, Iβ, II, IIII, IIIII, IVI, and IVII), of which cellulose I has the most crystalline structure with the highest axial elastic modulus [5]. Cellulose Iβ is more thermally stable than cellulose Iα because of the weaker hydrogen bond in cellulose Iα. Cellulose includes not only tightly packed slender rod-like crystalline microfibrils but also amorphous regions that have a lower packing density [1][2]. Because most of the cellulose is crystalline, it is not easy to be broken down [6]. It was reported that cellulose is resistant to strong alkali and oxidizing agents but is easily hydrolyzed by acid to water-soluble sugars [7]. The decomposition of cellulose can produce a monosaccharide called glucose (e.g., C6H12O6), which includes three hydroxyl groups, with two of them forming intramolecular hydrogen bonds and one of them forming intermolecular hydrogen bonds [8].

Figure 1. Structure of cellulose. Reproduced from [3], with permission from Elsevier, 2015.

Cellulose nanocrystal (CNC) is a type of cellulose-based nanomaterials, which is rod-like or whisker-shaped, with a width of 3–20 nm and a length of 50–2000 nm, as shown in Figure 2 [9]. It contains 64–98% cellulose Iβ depending on the source [5]. Normally, it can be produced using different methods, of which the hydrolysis with mineral acids, especially sulfuric acid (H2SO4), is the most commonly used, and the phosphoric acid (H3PO4) and hydrochloric acid (HCl) are also used [10]. The acid treatment can remove most amorphous cellulose and thus produce high purity cellulose crystals, leading the CNC to have a high crystallinity [9]. Also, during the sulfuric acid hydrolysis process, some negatively charged sulfate ester groups can be grafted on CNC’s surface [11]. CNC possesses some unique properties, such as high crystallinity, relatively high aspect ratio (10–100), high thermal stability (up to 300 °C), low density (~1.6 g/cm3), low coefficient of thermal expansion (~1 ppm/K), large surface area, high tensile strength (~7.5 GPa), and high tensile modulus (up to 170 GPa), and even it can be easily functionalized because of easily accessible hydroxyl groups on its surface [10][12][13][14]. 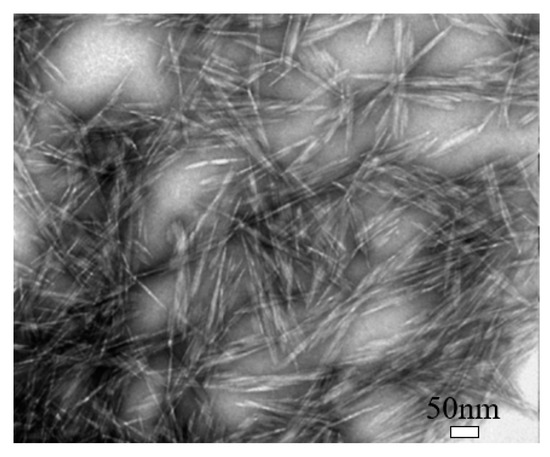 Cellulose nanofibril (CNF) is different in shape, size, and composition from CNC, as shown in Figure 3 [9]. It exhibits a complex, highly entangled, and web-like structure. The entanglement and percolation of CNF can increase the probability of fiber agglomeration compared to CNC [9]. CNF typically has a width of 50 nm and a length of less than 0.2 mm [15]. It has a high aspect ratio, low density, and high specific surface that can enable functionalization. Also, it has more amorphous cellulose and is less crystalline than CNC. CNF can be produced by TEMPO-mediated oxidation, multi-pass high-pressure homogenization, enzymatic hydrolysis, and direct mechanical fibrillation [9][16][17].

Bacterial cellulose (BC) can be produced from many bacterial genera, such as Acetobacter, Achromobacter, Aerobacter, and Agrobacterium, etc. The most commonly used bacterial strain is Gram-negative bacteria, Gluconacetobacter xylinus, previously known as Acetobacter xylinum [18][19]. The production of bacterial cellulose consists of two important processes, fermentation and purification. During the fermentation process, the microorganisms can move freely in the medium or attach to the cellulose fibers, leading to a highly swollen gel structure [20]. The purification process involves the death of microorganisms and the removal of cell wastes and culture medium from the cellulose matrix [20]. The morphology of BC is shown in Figure 4 [21]. It may change depending on specific bacteria and culturing conditions [22]. BC is an organic compound with the chemical formula of (C6H10O5)n, which is identical to the plant cellulose. However, BC has higher crystallinity, polymerization degree, purity, water absorption capacity, and tensile strength [23].

Figure 4. Scanning electron microscopy (SEM) image of bacterial cellulose (BC). Reproduced from [21], with permission from Elsevier, 2015.

Cellulose filament (CF) is a mechanically processed cellulose fibril, without any chemical or enzymatic treatment, and the fully mechanical process can “peel” fibers longitudinally, thus preserving their initial length as much as possible, while reducing their diameter by approximately 1000-fold [24]. The morphology of the CF network and individual CF fibril can be seen in Figure 5a and b, respectively [25]. It has a similar structure to CNF, but it may have a significantly higher aspect ratio (100–1000), with a length of around 100–2000 μm and a diameter of 30–400 nm [25].