Thymoquinone (TQ), the chief active constituent of Nigella sativa (NS), shows very valuable biomedical properties such as antioxidant, antimicrobial, anticancer, anti-inflammatory, antihypertensive, hypoglycemic, antiparasitic and anti-asthmatic effects. Several studies have examined the pharmacological actions of TQ in the treatment of oral diseases but its potential role in periodontal therapy and regeneration is not yet fully defined.

Recently, worldwide attention on the use of therapeutic herbs in the treatment of different diseases has been growing extensively owing to their promising outcomes and rare side effects [1]. As explained by the World Health Organization (WHO), more than two-thirds of the world’s general population, mainly in developing nations, depend on the use of natural remedies and traditional herbs for their main health care and disease treatment. Thus, the WHO has encouraged emerging countries to integrate the use of therapeutic plants as a supplementary resource to increase the effectiveness of the health care programs [1][2]. Among the evidence-based herbal remedies, highly ranked as a “miracle herb” is Nigella sativa (NS) [3][4] NS is a yearly blossoming plant from the family Ranunculaceae also known as black cumin, black seed, habbatul barakah, black caraway, kalojeera, kalonji or kalanji and is native to the southern regions of Asia and numerous countries in the Middle East and the Mediterranean region [4][5][6]. In historic and traditional medicine, NS has been utilized for centuries for the treatment of numerous illnesses of the body and psyche. The medicinal assets of NS have been established in the Islamic medicine, Chinese traditional treatments, Unani, Ayurveda and other medicinal systems [7][8]. Investigations have accredited the health benefits of NS due to its rich nutritional content and active components [4]. The seeds are composed of fixed and essential oils, alkaloids, proteins and saponins [4][9]. Among the pharmacologically active components that have been isolated from NS up to now the most described active and therapeutic constituent is thymoquinone (TQ) [9]. Numerous investigators have expansively reviewed NS and TQ and found them to have various medicinal activities, such as anti-inflammatory, antioxidant, antimicrobial, analgesic, histamine release inhibitory, hypoglycemic, anticarcinogenic, antihypertensive, immune-activating and hepatoprotective effects [3][4].

Infections of the periodontal ligament and gingiva have plagued humans since early historic ages. Paleo-pathological reports have displayed that periodontal complications specified by bone loss have pathologically affected early humans in diverse cultures around the world [10]. gingivitis is the slightest form of periodontal disease and defines the gingival inflammation due to the accumulation of plaque and bacteria between the gumline and tooth. This reactive condition is reversible with improving oral hygiene. In periodontitis the periodontal condition develops into a chronic, irreversible, bone destroying inflammatory disease. This induces a host immune response to protect against the invading microorganisms. During the defensive mechanism against the bacteria, the host immune reactions also incite the periodontal destruction through the loss of bone attachments, subsequently leading to alveolar bone loss of the affected tooth [11]. Non-surgical handling can be effective in mild to moderate periodontitis while surgical action is important in progressive conditions [10]. Adjunctive to the mechanical scaling and root planning in the treatment of periodontal diseases, confined systems of drug delivery, mouth washes, irrigations and devices for sustained drug release are used regularly for conveyance of therapeutic agents [10][12]. Furthermore, it has been reported that regular periodontal treatment along with the use of an adjunctive therapeutic mediator can improve patient outcomes significantly compared to mechanical treatment alone [10][13]. Modern day chemotherapeutic mediators exhibited significant effectiveness in the treatment of periodontal disease, but display a number of objectionable adverse effects such as taste alteration, tooth and tongue discoloration, antimicrobial resistance and the higher prices of these compounds [14][15]. Thus, the application of natural and herbal products as NS and TQ for periodontal treatment has garnered increased attention recently and could provide great benefits, especially to populations of lower socioeconomic status around the globe [4][16].

2. Modes of Action of Nigella sativa and Thymoquinone as Potential Adjuncts during Periodontal Therapy and in Periodontitis-Associated Settings

The effects of Nigella sativa extracts and thymoquinone in periodontal disease-associated settings and their modes of action with potential benefits for periodontal therapy have been investigated in several studies. These include in vitro studies, in vivo (animal) studies and clinical studies (RCTs). The reported medicinal modes of action and the procedures and results of these inquiries are further explained in the following segment.

Inflammation and production of reactive oxygen species (ROS) have been reported as major players in the pathogenesis of periodontal disease [17]. In numerous investigations, NS and TQ have been discussed as anti-inflammatory [18] and antioxidant mediators with curative effects [19][20]. Previous studies explained that TQ induces an antioxidant effect through the scavenging ability of various free radicals, being as effective scavenging superoxide anions analogous to superoxide dismutase [21][22]. TQ has also been proven experimentally to show noticeable anti-inflammatory functions [18]. It reduces the levels of nitric oxide (NO) via reduction of iNOS mRNA production by macrophages and suppresses pro-inflammatory cytokines as IL-1b, IL-6, TNF-α, IFN-c and PGE2, simultaneous with an increase of the anti-inflammatory IL-10 [22][23]. The possible mechanism by which TQ employs this combined anti-inflammatory and anti-oxidant action might be associated to its aptitude to impede eicosanoid production. TQ and NS extracts have experimentally shown significant suppression of lipid peroxidation and eicosanoid generation, specifically, thromboxane B and leukotrienes B4, via inhibiting COX and LOX molecular pathways [24]. Considering these potential properties anti-inflammatory and anti-oxidant properties of TQ it may perform significant function to prevent the initiation and progression of periodontal disease as observed in the current review.

In the animal investigation proposed in one of the in vivo studies an assessment of the possible protective role of TQ on periodontal and gingival inflammation was performed [25]. The outcomes displayed that rats treated with TQ in their drinking water or as an oral gel had significantly lower values of periodontal indices and inflammatory clinical parameters in comparison to the control group. Histological investigation of their mandibular tissues correspondingly demonstrated no inflammatory signs in contrary to their controls. Another rat periodontitis model reported the preventive role of TQ in the initiation and progression of periodontal inflammation [26]. Rats’ molars gingival margins were ligated with a 4/0 silk suture to initiate periodontal inflammation. The trial involved 24 rats randomly and equally scattered into non-ligated, ligature only and ligature with TQ treatment (10 mg/kg gastric feeding) groups. After 11 days, the rats were sacrificed to examine the alveolar bone levels of the molars clinically and histologically.

Statistically significant higher bone losses were observed in the ligature-only group in comparison with the two other groups. On a histological basis, the same outcome was reported concerning the ratio of ICI to osteoclasts. Furthermore, osteoblasts presented lower activity in the ligature only group in comparison with the other groups. Consequently, the outcome concluded that oral administration of TQ assisted in the prevention and suppression of periodontal inflammation and reduced alveolar bone resorption. Moreover, a clinical randomized single-blind split-mouth trial [27] evaluated the efficiency of a periodontal chip impregnated with 2.5 mg TQ in periodontal treatment. Twelve male patients with periodontal pockets were distributed into three different groups: control (no treatment), plain chitosan-periodontal chips, and TQ-impregnated chips. Compared to the control and plain periodontal chip group the TQ treated patients displayed significant improvements in the clinical attachments and other clinical periodontal parameters. This result concluded the advice to use of TQ chips as an adjunctive periodontal treatment besides the scaling and root planning and for maintenance visits. Recently, further clinical studies were performed on periodontitis patients to evaluate the potential benefits of local application of thymoquinone gel as an adjunctive to regular periodontal treatment. One of these investigations selected 20 patients with 40 test sites and divided them into two groups. The first group was treated by scaling and root planning in addition to local application of 0.2% TQ gel, while patients of the second group were only treated by regular scaling and root planning [28]. After 6 weeks a statistically significant decrease was detected in PPD and GCF-ALP levels besides a rise in periodontal attachment levels in the TQ group in contrast to the regular periodontal therapy patients. Another similar trial was completed on 48 periodontitis patients with application of 0.1% TQ gel adjunctive to the regular scaling and root planning [29]. Analogous to the reported previous outcomes, the TQ-treated group of this clinical study also presented a significant improvement in all clinical and biochemical parameters including PI, GI PPD and CAL, along with the of IL-1β inflammatory levels and total antioxidant capacity (TAOC) in the gingival crevicular fluid compared to the non-TQ-treated patients (Figure 1). 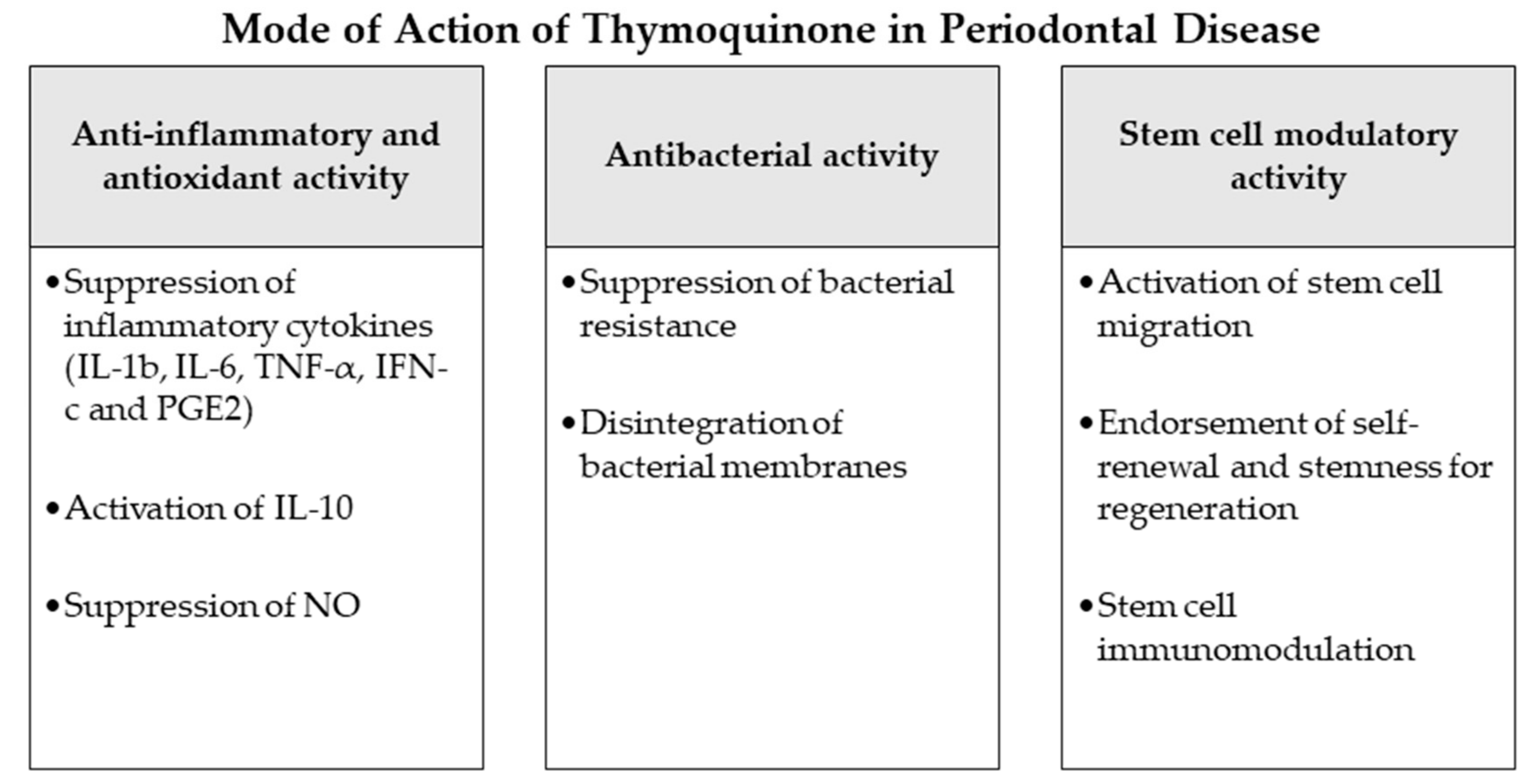 Periodontal disease is a multifactorial pathophysiological process described by an inflammation of periodontal host tissues mediated by the immune response and linked to dysbiotic plaque biofilms, consequently destroying the tooth-supporting apparatus progressively and allowing the loss of periodontal attachment [30][31]. Following a gingival inflammation initiated by bacterial biofilm formation, dysbiotic ecological changes in the microbiome arise, responding to inflammatory and tissue breakdown products and immune responses and leading to the activation of several key molecular pathways promoting periodontal destruction. This mechanism finally activates host-derived proteases enabling the loss of marginal periodontal ligament fibers, junctional epithelium apical migration, concomitant with an apical spread of the microbial biofilm along the root surface [30][31]. Bacterial species of the identified “red complex” (Treponema denticola, Porphyromonas gingivalis and Tannerella forsythia) have been perceived historically as the chief infective microorganisms related to periodontitis [32]. This idea was nevertheless determined using culture-grounded investigations, which did not explore much of the microbiological diversity existing in samples [33]. Newer techniques have furthermore discovered other organisms also closely associated with periodontal disease such as the bacterial classes Negativicutes, Erysipelotrichia and Clostridia [34]; the genera Prevotella, Fusobacterium [35] and Synergistes [36]; as well as the species Filifactor alocis [34], Methanobrevibacter oralis, Methanobacterium curvum/congolense, Methanosarcina mazeii [33][37][38] and Aggregatibacter actinomycetemcomitans [39].

The goal of periodontal therapy is to resist the microbial infection and rearrange the configurations and functions of the periodontium [40]. Difficult tasks persist in regenerating the periodontal structures and constructing bone-PDL-cementum complex concurrently [41]. Osteogenesis slightly precedes the cementum and periodontal ligament fibers differentiation. Subsequently, the oriented periodontal ligament fibers require to be attached to novel generated alveolar bone and cementum tissue, which is considered one of the most challenging processes in periodontal regeneration [42]. In recent years, numerous investigators discussed the high potential of periodontal regeneration with noticeable clinical success through mechanisms of regeneration for bone, cementum and PDL by mobilization of endogenous stem cells from their niches or transplanting exogenous stem cells targeting the periodontal defects [42]. Numerous mesenchymal stem cell (MSC) types persist and are accountable for homeostasis of the tissues, serving as a spring of renewable stem/progenitor cells to produce other essential cells throughout adult life [43]. Consequently, a successful periodontal regeneration depends on recruitment of locally-derived stem/progenitor cells, such as populations of resident periodontal or oral-tissue stem/progenitor cells, to the defect site for tissue homeostasis and succeeding differentiation into bone, periodontal ligament and cementum-forming cells [42][44]. Several studies have observed the modulating effects of natural herbs and compounds on the immune functions, migration, proliferation, cell fate determination and self-renewal abilities or “stemness” of various types of mesenchymal stem cells [45][46]. Among these studies, TQ and NS have displayed various effects that might influence the periodontal therapy and play a role in better regeneration and healing [47][48][49][50]. As explained in the investigations [47], TQ could activate c-MET and CXCR4 signaling pathways, promoting MSCs migration. TQ was correspondingly able to expand MSC immunomodulatory potential, as well as self-renewal ability and “stemness” by influencing the associated gene expression in vivo and in vitro [47][48]. Other experiments observed the significantly increased therapeutic potential and healing ability of MSCs after administration of NS extract to the damaged sites [49][51]. Such results may indicate a great regenerative accelerating potential of NS and TQ mediators if administered adjunctively to periodontal therapy. Nevertheless, more in vitro and in vivo investigations are needed, especially on periodontal ligament stem cells as major residents of periodontal defects to confirm and expand the knowledge about these potential advantages of NS and TQ (Figure 1).