Endodontic treatment for a tooth with damaged dental pulp aims to both prevent and cure apical periodontitis. If the tooth is re-infected as a result of a poorly obturated root canal, periapical periodontitis may set-in due to invading bacteria.To both avoid any re-infection and improve the success rate of endodontic retreatment, a treated root canal should be three-dimensionally obturated with a biocompatible filling material. Recently, bioactive glass, one of bioceramics, is focused on the research area of biocompatible biomaterials for endodontics. Root canal sealers derived from bioactive glass-based have been developed and applied in clinical endodontic treatments. However, at present, there are few of evidence aboutthe patient outcomes, sealing mechanism, sealing ability, and removability of the sealers. Herein, we have developed a bioactive glass-based root canal sealer and provided evidence concerning its physicochemical properties, biocompatibility, sealing ability, and removability. We also review the classification of bioceramics and characteristics of bioactive glass. Additionally, we describe the application of bioactive glass to facilitate the development of a new root canal sealer. Furthermore, this review shows the potential application of bioactive glass-based cement as a root canal filling material in the absence of semisolid core material.

Endodontic treatment for a tooth with damaged dental pulp aims to both prevent and cure apical periodontitis. After a root canal preparation and irrigation in order to both remove bacteria and suppress the inflammation of the periodontal ligament around root apex, dentists obturate the treated root canal with filling materials[1]. If the post-treatment tooth is re-infected due to a poor root canal obturation, periapical periodontitis sets-in due to an invasion of bacteria into the canal. It is well known that the success rate of endodontic retreatment on periapical periodontitis is no higher than that of the initial treatment[2][3][4][5]. Three-dimensional obturation of the treated root canal with biocompatible filling materials is vital to avoid re-infection as well as the root canal preparation and irrigation steps, thereby increasing the success rate of retreatment[6][7].

The primary functions of any root canal filling material are to seal the bacterial in-growth so as to prevent fluid influx from providing nutrients to the trapped bacterium[8]. Endodontic treatment techniques have been changing due to technological advances, and advances in root canal filling material have significantly contributed to increased rates in the successful treatment of patients. Root canal sealer, one of the many filling materials, has been shown to be essential for successful obturation, as the sealer should bond to the dentin of the canal walls and close-off the periapical area of the root canal system. However, conventional root canal sealer typified by Grossman's formula is hardly ideal as it is neither adhesive nor does it have a bonding effect with dentin.

Mineral trioxide aggregate (MTA)-based root canal sealers, such as EndoSequence BC Sealer (Brasseler USA, Savannah, GA, USA), have been developed and are now commercially available; these MTA-based sealers provide ideal performance as a root canal sealer. MTA is formulated from commercial Portland cement (tricalcium silicate, dicalcium silicate, tricalcium aluminate, tetracalcium aluminoferrite, calcium sulfate)[9][10], combined with bismuth oxide powder for radiopacity. MTA-based root canal sealer is generally believed to be a bioceramic-based sealer. However, MTA is not bioceramic as its crystals are non-vitreous. It has been reported that some MTA-based sealers show good physical and biological properties[11][12][13], as well as the ability to produce hydroxyapatite on its surface in the presence of phosphate-buffered saline[14][15]. A hypothesized mechanism for the formation of hydroxyapatite is initiated by the release of calcium hydroxide from MTA, which interacts with a phosphate-containing solution to produce a calcium-deficient apatite achieved via an amorphous calcium phosphate phase[16]. These characteristics indicate that MTA-based sealers may display bioactivity. However, several studies report that some MTA-based root canal sealers show non-biocompatibility due to the presence of arsenic, a low ability to seal, long setting time, and non-retreatability[17][18].

Recently, bioactive glass, one of confirmed bioceramics, has been the focus of a great deal of research in biomaterials for Endodontics. Furthermore, bioactive glass-based root canal sealers have been developed and applied within clinical endodontic treatments.

Biomaterials are defined as synthetic or natural materials that are capable of either replacing parts of a living system or functioning while in intimate contact with living tissues[19]. Biomaterial-based implants and medical devices are widely used to replace or to restore the functionality of traumatized or degenerated tissues. The foremost requirement when selecting a biomaterial is its biological acceptability as a long-term non-rejected implant within the body. To achieve this acceptability, applicable biomaterials must be non-toxic, non-carcinogenic, chemically inert, stable, and mechanically strong. The most common biomaterial classes are metals, polymers, and ceramics. These three classes are used either solely or in combination to form the most presently available implantation devices.

Ceramics, a class of biomaterial, are polycrystalline materials that display characteristic hardness, brittleness, strength, stiffness, resistance to corrosion and wear, and low density. Bioceramics are utilized to restore functionality to diseased or damaged hard tissues and are used in several different fields such as dentistry, orthopedics, and medical sensors. Presently available bioceramics come in three basic types: bioinert, bioactive, and bioresorbable ceramics[20]. The first generation of bioceramics was comprised of alumina and zirconia[21]. The main features of first-generation bioceramics were their good mechanical properties, especially their wear resistance. The second generation of bioceramics was comprised of bioactive glass (BG), hydroxyapatite, and calcium phosphate-based cement. Second generation bioceramics bond to and integrate with the living bone of the body without forming a fibrous tissue around them and without promoting either inflammation or toxicity[22]. Unique among the second-generation bioceramics, BG has instigated a revolution in healthcare appliances and has paved the way for modern biomaterial-driven medicine[23][24].

BG contains the glass type of Na2O-CaO-SiO2-P2O5 in specific proportions[25], as a component of silica (SiO2) is ≤ 50 mol%. The compositional phase diagram for BG, also highlighting at what mixture-levels particular biomaterial properties arise, is provided as Figure 1[25][26]. BG has been applied in clinical settings for orthopedic surgery for several decades. When BG is implanted in a defect area close to bone, reactions on BG surfaces lead to the release of critical concentrations of soluble Si, Ca, P and Na ions, which induce favorable intracellular and extracellular responses leading to rapid bone formation[27]; this bone formation is then followed by the formation of silica-rich gel on its surface. Silica-rich gel reacts with ions present in bodily fluids, resulting in the formation of hydroxyapatite (HAp)-like on the surface of BG. Furthermore, osteoblasts produce new bone in the silica-rich gel, allowing BG to bond with the bone through both the formation of bone-like hydroxyapatite layers and biological interactions with collagen (Figure 2)[22][28]. Additionally, BG is able to stimulate bone cells to regenerate and self-repair, thus significantly accelerating tissue healing kinetics[27]. These properties are termed osteoconductivity and osteoinductivity[23][29]. BG has been mainly used for applications where it will contact bone tissue, yet BG has recently shown promise in inducing the repair of soft tissues, too[30][31]. BG has attracted the interests of many researchers, as the ionic dissolution products of BG were found to stimulate angiogenesis. Furthermore, there now exist other BG-based products for applications in wound healing and peripheral nerve regeneration[32]. These applications suggest that BG shows suitability and biocompatibility as a biomaterial capable of being applied both to hard tissues such as dentin or cementum—as these materials are similar to the bone—and to soft tissues such as dental pulp and periapical tissue[33].

Figure 1. Compositional phase diagram of bioactive glasses with a focus on bone-bonding. Region S is the region of Class A bioactivity where bioactive glasses bond to both bone and soft tissues and display gene activating characteristics[25].

General practitioners desire a root canal sealer capable of strongly bonding to root canal walls with high sealing properties, high biocompatibility, as well as removability to accommodate retreatment. Researchers have found promising results in the application of bioceramics to solve these issues. Bioceramic-based materials have recently been introduced as endodontics materials as both repairing cement[34][35] and root canal sealer[13][36][37][38][39]. Bioceramic-based materials show an alkaline pH, antibacterial activity, radiopacity, biocompatible, nontoxic, non-shrinking, and are chemically stable within the biological environment. A further advantage of bioceramic materials is that they promote the formation of hydroxyapatite, ultimately facilitating a bond between dentin and the filling material during the setting process[11][38]. However, conventional bioceramic-based sealers show clinical disadvantages such as difficulty in handling, higher cytotoxicity in its freshly mixed state, a high pH during setting, long setting times, and that hardening requires sufficient moisture[18][40][41][42][43].  An additional disadvantage is that bioceramic-based sealers are difficult to remove when facilitating retreatment[44]. To overcome these disadvantages, we developed a next-generation bioceramic-based root canal sealer based on previous medically reliable BG-based materials, Nishika Canal Sealer BG (Nippon Shika Yakuhin, Yamaguchi, Japan).

There are two well-known commercialized root canal sealers that include BG. One is GuttaFlow Bioseal (GFB) (Coltène/Whaledent AG, Altstätten, Switzerland), which is composed of gutta-percha, polydimethylsiloxane, platinum catalyzer, zirconium dioxide, and BG. GFB has shown a low solubility, low porosity, alkalization capacity[45], dentin penetrability[46], and cytocompatibility[47][48]. At present, only limited evidence is available concerning either the mechanism of GFB hardening or its ability to seal the canal and be removed for retreatment. The second product is Nishika Canal Sealer BG (CS-BG), shown in Figure 3; presently there exists compelling evidence concerning, with evidences about its physicochemical properties, biocompatibility, sealing ability, and removability. CS-BG was developed from BG-based biomaterials and originally intended for both dental pulp and bone regeneration therapies. CS-BG is a two-phased paste; Paste A consists of fatty acids, bismuth subcarbonate, and silica dioxide, whereas Paste B consists of magnesium oxide, calcium silicate glass (a type of BG), and silica dioxide, etc. By pushing the plunger of a double syringe, the two-phase paste can be dispensed at a 1:1 ratio. The dispensed paste can be mixed easily and quickly; this procedure is captured in Figure 4. A stainless-steel spatula may be corroded by the ingredients of the paste, we recommend the use of a plastic spatula to avoid contamination of metal implements. CS-BG paste tends to get hardened when exposed to heat or moisture. Therefore, it is recommended to store the syringes in the resealable aluminum foil bag, then placing the bag in a cold storage location (1–10℃) without freezing. 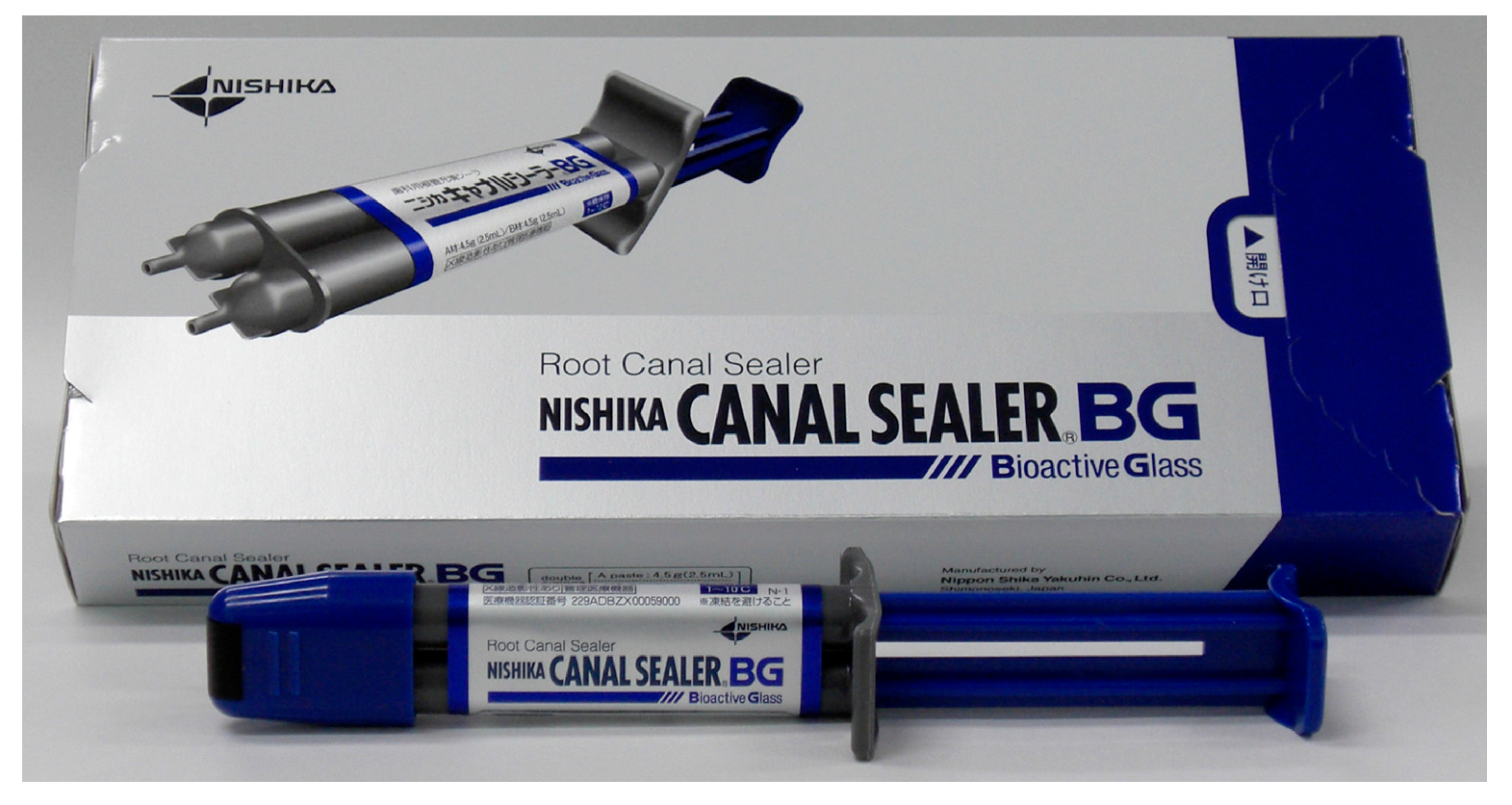