Neutrophil extracellular traps (NETs) were initially considered to be one of the first line responses of the immune system against infected bacteria [1], extensive studies have revealed that NET formation is associated with the initiation and progression of various noninfectious diseases [2][3]. In cardiovascular diseases (CVDs), NETs have been found in vascular lesions such as atherosclerotic plaques and thrombi [4].

Neutrophils or polymorphonuclear leukocytes (PMNs) have a short lifespan and are highly susceptible to activation. The human promyelocytic leukemia cell line, HL-60, is widely used in the in vitro analysis of NETs. HL-60 cells can be differentiated into neutrophil-like cells using various pharmacological stimulants, such as all-trans retinoic acid, dimethyl sulfoxide, and dimethylformamide. HL-60-derived neutrophil-like cells reveal NET formation characterized by CD11b expression, DNA release, oxidative burst, and histone citrullination; however, these responses are more pronounced in PMNs than in HL-60 [5]. Phorbol myristate acetate (PMA), a potent protein kinase C activator, is a well-defined NET-inducer [6]. In addition to PMA, several cytokines and chemokines have been reported to induce NET formation, including TNFα, IL-8 [1], IL-18 [7], CXCL7 [8], complement (C5a) [9], and interferons [10]. Moreover, NET formation is primed by crystals of monosodium urate [11][12] and cholesterol [13]. High concentrations of glucose induce NETosis [14], indicating that NET formation is increased in patients with type 2 diabetes [15] and diabetic retinopathy [16]. Furthermore, nicotine also induces NET formation [17], and PMNs from smokers are more susceptible to PMA-induced NET formation than those from nonsmokers [18].

NET release can be classified into two types: (1) "suicidal NETs", which proceed in 3–4 h, and induce DNA release concomitantly by rupturing neutrophils to cause cell death (NETosis); and (2) "vital NETs", which release DNA via vesicles into the extracellular space within 60 min, without causing cell death [2][19]. Notably, the term "NETosis" is applicable only when experimental evidence clearly supports cell death upon NETting [20]. While NET formation is elicited via various signaling pathways involving ROS production [21], the two types of NETs are mediated by different sources of ROS. The Raf-MEK-ERK pathway stimulates NADPH oxidase-mediated ROS production in the process of suicidal NETs [22], whereas mitochondrial ROS is mainly required in vital NETs [17][23]. Chromatin decondensation associated with fragmentation of the nucleus is an important step that releases DNA into the extracellular spaces. MPO and proteases, particularly NE, translocate from azurophilic granules to the nucleus to promote disintegration of the chromatin [24], leading to histone degradation [25]. Gasdermin D is a pore-forming protein that was initially identified as a crucial factor for pyroptotic cell death of macrophages [26][27]. NE-dependent cleavage of gasdermin D activates itself, which in turn plays a pivotal role in suicidal NETs by expanding granules and nucleus, and eventually ruptures the plasma membrane [28][29].

DNA strands released from neutrophils are decorated by proteins derived from the cytoplasm, azurophil granules, and nuclei. Intracellular ROS production activates peptidylarginine deiminase 4 (PAD4), which catalyzes the posttranslational modification of positively charged arginine residues of histones to neutral citrulline residues. Previous studies have demonstrated the necessity of PAD4 activity for NET formation, whereas most recent studies that have compared the process of NET formation in mouse and human neutrophils, in addition to HL-60-derived neutrophils, have revealed that PAD4 enzymatic activity is crucial for efficient DNA decondensation [30][31].

Membrane receptor-mediated signaling pathways lead to NET formation via ROS production and PAD4 activation [25]. In general, toll-like receptors (TLRs) on the plasma membrane of neutrophils play distinctive roles in NET formation in the presence of bacterial pathogen-derived stimuli, including lipopolysaccharides [25].

The receptor for advanced glycation end products (RAGE) is expressed on human neutrophils [32]. High-mobility group box 1 (HMGB1), a DNA-binding protein secreted from macrophages and monocytes, which acts as a damage-associated molecular pattern (DAMP) to mediate thrombosis [33], is expressed on activated platelets. It has been reported that binding of HMGB1 to RAGE on neutrophils induces NET formation [32].

Fcγ receptors expressed on PMNs participate in the induction of ROS production as well as recognition of antibody-opsonized pathogens [34]. The immune complex increases NET formation in murine neutrophils expressing human FcγRIIa (CD32a), but not FcγRIIIb (CD16b) [35]; however, among the antibody receptors expressed by human neutrophils, only FcγRIIIb (CD16b) is responsible for NET formation in response to cross-linking antibodies [36]. Experimental differences, including cell types and stimulants, may be responsible for these differences in findings. Interestingly, TLR7/8 activation leads to proteolytic cleavage of FcγRIIa, thereby shifting neutrophils from phagocytosis of immune complexes to NET formation [37]. Clinically relevant evidence has revealed that neutrophils from patients with systemic lupus erythematosus (SLE) demonstrate similar cleavage of FcγRIIa related to that of neutrophil activation [37].

Several studies regarding the pathophysiological roles of NETs have elucidated the implication of NETs [38] with coronary artery [39][40] and venous thrombosis [41]. Immunothrombosis and NET-induced thrombosis are important and widely studied phenomena [42][43][44]. Plaque rupture and plaque erosion are two major causes of atherothrombosis. Plaques prone to rupture are characterized by a large lipid core, thin fibrous cap, and numerous macrophages, but few smooth muscle cells (SMCs), which form red fibrin-rich thrombi. Plaque erosion, which causes white platelet-rich thrombi, is associated with enriched collagen, abundant SMCs, and little accumulation of lipids and foam cells [45] (Figure 1). Neutrophils infiltrate culprit lesions, including both ruptured and eroded plaques [46], via NET formation [47]. By activating neutrophils, circulating MPO levels are increased in patients with acute coronary syndrome [48]. Lipid-lowering pharmacotherapy with statins reduces plasma cholesterol levels and suppresses lipid accumulation in the lesions, thus exerting stabilizing effects on rupture-prone atherosclerotic plaques with reduced inflammation in the vascular tissue [45][49][50][51]; however, a remarkable number of patients have experienced cardiovascular events even after achieving a marked reduction in their cholesterol levels by statin therapy; accordingly, the underlying mechanism for superficial erosion has gained immense attention [52]. Presently, NETs are regarded as pivotal contributors in the formation of thrombi during superficial erosion [53][54]. This is in accordance with the observations that MPO levels in plasma and the density of MPO-positive cells in thrombi are elevated in acute coronary disease patients with eroded culprit plaques, but not in patients with ruptured culprit plaques [55][56][57].

Figure 1. Two major lesions that lead to thrombus formation: (a) plaque rupture and (b) plaque erosion—are illustrated. (a) A vulnerable plaque is characterized by a large lipid core covered by a thin fibrous cap. When the fibrous cap is ruptured, red thrombus is produced. (b) A plaque erosion is characterized by a thickened intima enriched with smooth muscle cells (SMCs) and collagen fibers. When endothelial cells are injured, white-platelet-rich thrombus is produced.

NETs have been implicated in metabolic abnormalities such as diabetes. Neutrophils isolated from type 1 and type 2 diabetes are sensitive to NET formation, and the accelerated NETs impair wound healing [19]. Hyperglycemia is correlated with elevated white blood cells and reduced high-density lipoprotein (HDL) cholesterol levels. In diabetic mice, raising the levels of functional HDL, which accepts cholesterol from peripheral tissues, leads to regression of atherosclerosis, associated with decreased plaque inflammation and reduced NET formation in the plaque [58].

The mechanistic link between NET formation and atherosclerosis/thrombosis has been widely investigated. NETs evoke inflammatory responses of immune cells to upregulate inflammatory cytokines [59]. NETs and their components not only damage ECs directly [60][61], but also trigger activation of ECs to form a scaffold, leading to thrombosis. In pathophysiological conditions, including vascular diseases, ECs lose their endothelial phenotype and then acquire a mesenchymal phenotype, which is characterized by the expression of fibroblastic markers [62]. Endothelial-to-mesenchymal transition (EndMT) is involved in the progression of atherosclerosis [62][63][64]. In general, NETs are internalized into ECs through RAGE via clathrin-dependent endocytosis; however, when excess amounts of NETs remain on the extracellular surface, it induces EndMT of ECs to loosen cell–cell contact, in which NE acts as a proteolytic enzyme of VE-cadherin [65].

Oxidatively modified low-density lipoprotein (oxLDL) has been physiologically defined as a subpopulation of LDL that comprises various oxidative modifications in the protein components and oxidized lipids, which could act as DAMPs. oxLDL has been recognized as a crucial initiator and accelerator of atherosclerosis through foam cell formation by macrophages; however, recent studies have demonstrated that oxLDL stimulates neutrophils to induce NET formation and enhance NET-mediated inflammatory responses in vascular endothelial cells.

OxLDL acts as a DAMP and triggers sterile inflammatory responses to promote CVDs [6]. Infiltration of neutrophils into arteries during the early stages of atherosclerosis has been observed in hypercholesterolemic mice [66]. Numerous studies, on mice and humans, have provided evidence for the contribution of neutrophils to early atherosclerosis [67][68]. We have demonstrated the appearance of oxLDL in vascular tissues and in circulation even prior to atherosclerotic lesion development in apoE-KO mice [69]. These findings prompted us to examine whether oxLDL influences NET formation and subsequent endothelial inflammatory responses. PMA-induced NET formation in both HL-60-derived neutrophils and human PMNs is remarkably accelerated upon coincubation with oxLDL, but not with native LDL [70]. Moreover, extracellular components, after induction of NET formation by PMA with oxLDL, are capable of inducing morphological changes and MMP-1 expression in human aortic ECs (Figure 2). Presumably, neutrophils may play a pivotal role in the early stages of atherogenesis through the cooperative actions of oxLDL. 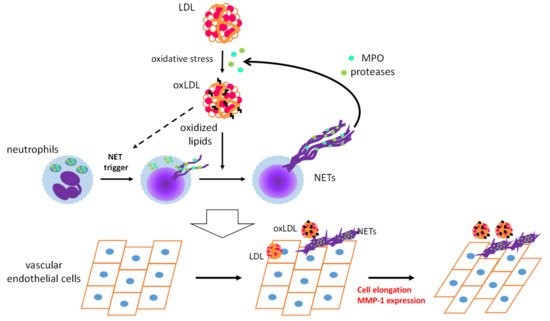 Intriguingly, NET-induced activation of human aortic ECs is enhanced upon coincubation with native LDL, suggesting that MPO and proteases released from neutrophils upon NET formation could act on native LDL and induce oxidative modification and/or degradation of LDL to produce modified proinflammatory LDL [11]. These phenomena, induced by the coexistence of NETs and native LDL or oxLDL, correspond to enhanced EndMT caused by the excess phagocytic capacity of ECs [65]. One possibility is that the cooperative action of oxLDL and NETs on ECs induces EndMT and subsequent neovascularization, which leads to atherosclerotic lesion formation [71].

Recently, a unique regulatory mechanism of lipoprotein-mediated vWF degradation has been described. LDL, but not HDL, has the ability to bind vWF and accelerate proteolytic cleavage of vWF by A disintegrin-like and metalloproteinase with thrombospondin type 1 motif 13 (ADAMTS13) in a concentration-dependent manner under shear stress; however, oxLDL competitively inhibits vWF proteolysis associated with native LDL. Furthermore, native LDL, but not oxLDL, inhibits adhesion of platelets to vWF on ECs under flow [72]. NET formation also inhibits the proteolytic activity of ADAMTS13 via PAD4-mediated citrullination [73].  ADAMTS13 is a specific protease for von Willebrand factor (vWF), known to cause thrombotic thrombocytopenic purpura [74]. vWF, a glycoprotein produced by endothelial cells (ECs), forms multimers and binds to collagen and Factor VIII, thus supporting platelet binding to the wound sites. vWF has been elucidated as one of the key factors in the development of NET-mediated endothelial damage and formation of thrombosis. Venous thrombi are characterized by red clots enriched with erythrocytes, because erythrocyte binding to vWF is promoted upon reduction of shear stress [75]. PAD4 released from NET-forming neutrophils citrullinates ADAMTS13; the modified ADAMTS13 loses its proteolytic activity against vWF, leading to the formation of thrombi after vessel injury via accumulation of platelets [73]. Considering that vWF functions as a scaffold for NETs, thrombosis, and platelets, these data indicate that oxLDL may enhance NET-mediated thrombosis formation via direct interaction with vWF (Figure 3). 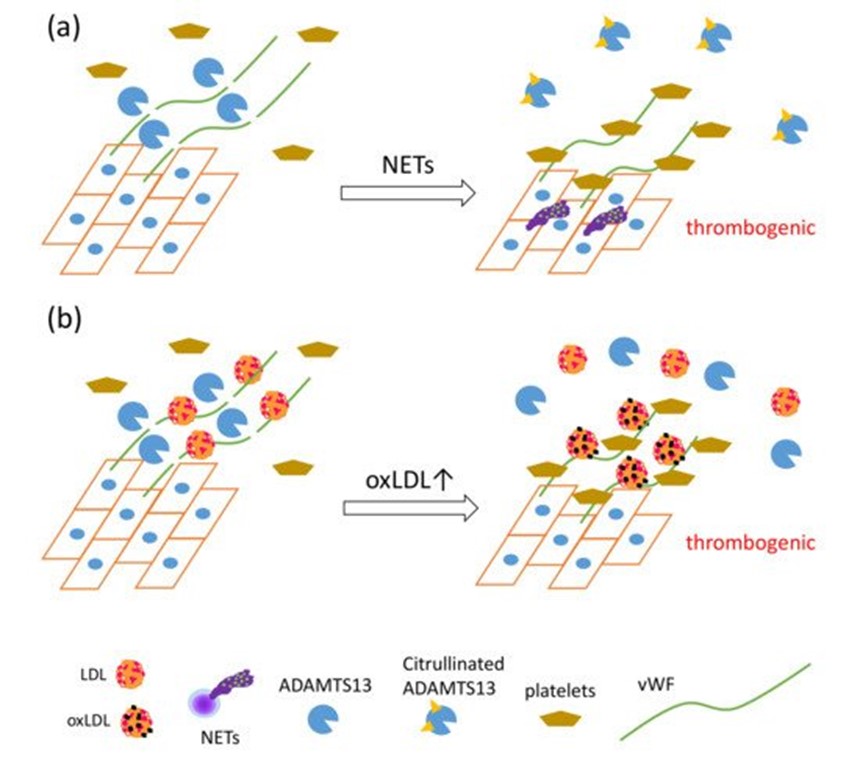 Figure 3. The synergistic actions of NET formation and oxLDL production presumably cause a proatherothrombotic status on the vascular endothelium. (a) PAD4 secreted by NET formation mediates citrullination of ADAMTS13, which inhibits the proteolytic activity of ADAMTS13 against von Willebrand factor (vWF), leading to increased vWF-platelet string formation on the endothelium [73]. (b) LDL, identified as a novel vWF-binding partner, accelerates the proteolytic cleavage of ultra-large vWF by ADAMTS13 under shear stress, and inhibits adhesion of platelets to ultra-large vWF. OxLDL, having lower ability to enhance proteolytic activity of ADAMTS13 than native LDL, competes with native LDL, which in turn increases platelet adhesion to ultra-large vWF, which could cause thrombus formation rich in vWF, platelets, and DNA [72].