Metal-organic frameworks (MOFs) and covalent organic frameworks (COFs) are two innovative classes of porous coordination polymers. MOFs are three-dimensional materials made up of secondary building blocks comprised of metal ions/clusters and organic ligands whereas COFs are 2D or 3D highly porous organic solids made up by light elements (i.e., H, B, C, N, O). Both MOFs and COFs, being highly conjugated scaffolds, are very promising as photoactive materials for applications in photocatalysis and artificial photosynthesis because of their tunable electronic properties, high surface area, remarkable light and thermal stability, easy and relative low-cost synthesis, and structural versatility.

In the last decades, the demand for sustainable clean energy sources, particularly solar energy, has constantly raised. In spite of the fact that the energy supplied by the Sun's radiation over one year is roughly 10,000 times higher than the world current rate of energy consumption, the state-of-art of the photovoltaic devices are not yet satisfactory because of their low efficiency, high cost and/or limited scale [1].

Both MOFs and COFs belong to the wide family of porous coordination polymers (PCP). Among PCP, MOFs and COFs are becoming more and more attractive (Figure 1). These features can be very interesting for their application in photovoltaics. Indeed, MOFs and COFs crystallinity allows obtaining highly ordered and usually conjugated polymers both in 2D and/or 3D structure. This will give the opportunity to tune the electronic properties of these classes of materials and modify their charge transport ability by slight modification of both metal center (in MOFs) and organic linkers (in both MOFs and COFs).

MOFs and COFs usually possess a π-conjugated systems and a wide porous volume that can be tuned with a careful selection of the linker which has strong effects on the structure of the material, especially the electronic one [2][3]. Additionally, COFs show short interlayer distances that could lead to conductive features throughout their structure by organizing an interface between donor and acceptor moieties at a molecular level [4]. MOFs [5][6][7] and COFs [8][9] are generally synthesized by hydrothermal or solvothermal synthesis and based on condensation reaction. In this method, one of the key roles is played by temperature and solvents mixtures. In particular, in order to favor the synthesis of a crystalline form, solvents should possess different polarities and boiling points [5]. This is of utmost importance as highly crystalline samples are mandatory to apply powerful structural characterization techniques as X-ray or neutron diffraction in order to determine the atomistic structure of the material. While MOFs are synthesized at a thermodynamical regime where bonds are simultaneously formed and broken, permitting the growth of nice crystals, the same is not true for COFs in which covalent bonds are formed very often in a concerted way. This phenomenon is reasoning the general low crystallinity of COFs, which was tackled by some authors very often with a careful optimization of the synthetic conditions [10][11]. 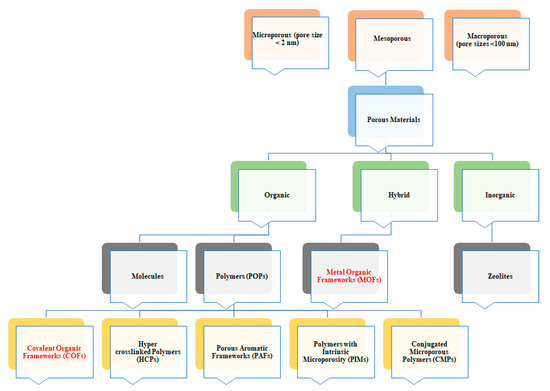 Figure 1. Categorization of porous materials based on their pore size and the material varieties.

Notwithstanding their promising feature the effective application of this compound is limited by solubility issues affecting the processability of the material itself. This is mainly a drawback when COFs are compared to other porous organic polymers, such as amorphous conjugated microporous polymers (CMPs) or polymers with intrinsic microporosity (PIMs) (Figure 1), that are highly processable [12].

Metal-organic frameworks are three-dimensional porous coordination polymers made up of secondary building blocks comprised of metal ions/clusters and organic ligands [13][14]. The name metal-organic framework was coined for the first time in 1995 [15]. Afterwards, Cu(II) tricyanomethanide polymeric (crystalline) structures were presented by Biondi et al. [16]. Interestingly, in 1990, a study on the design of scaffold-like materials using Cu(I) centres and tetracyanotetraphenylmethane were reported by Hoskins and Robson [17]. In 1999, Yaghi and his group extended this metal framework to the 3D form by creating a highly porous crystalline structure known as MOF-5 [18]. Later, they also created an isoreticular family of this MOF by employing different carboxylate linkers [19][20].

The synthesis of nanostructures generally takes place through solvothermal methods: commonly, metal precursors and organic linkers are dissolved in solvent and placed in a closed reaction vessel for the construction and self-assembly of MOF crystals. Mostly N,N-dimethylformamide (DMF), N,N-diethylformamide (DEF), methanol, ethanol, and acetonitrile are used as solvents, a temperature lower than 220 °C is usually employed and the crystallization times range from several hours to several days. Recent advances indicate that new synthesis methods such as electrochemical, microwave-assisted, mechanochemical synthesis, microfluidic synthesis methods, etc. have been applied [6]. These different strategies provide some opportunities to control and modify the morphology, size and the chemical functionalization of crystals that impact on properties and performances of the obtained MOF materials [21].

Up to now, more than 70,000 different MOF structures have been reported [22] with surface area values ranging from 1000 to 10,000 m2/g. This exceeds by far those of common porous materials such as zeolites and carbons [23]. Concerning applications, MOFs were firstly employed as catalysts for the first time in 1994 to promote the cyanosilylation of aldehydes [24] and as hydrogen adsorption materials later in 2003 [25]. They are very promising for applications as (photo)active materials in photocatalysis and artificial photosynthesis because of their tunable electronic properties, their structural versatility, and their easy and relative low-cost synthesis [3][26][27][28][29]. Furthermore, embodiment of photoactive ligands into MOFs represents an attractive and unconventional approach to study energy transfer, light harvesting, and photo-excited reactivity within well-ordered and properly designed architecture [13][30][31][32][33][34][35]. Remarkably, MOFs have been also employed to improve the stability of conventional solar cells as the ones based on Cu2S/CdS. For instance, Nevruzoglu et al. adopted MOFs as a source of copper to minimize the performance degradation caused by the rapid diffusion of Cu ions into the CdS layer. Alternatively, zirconium-based MOFs could be implemented owing to their high thermal and chemical stabilities [36][37].

Self-assemblies of molecular COFs layers have recently gained attention as a feasible class of semiconducting polymers [4]. The full organic nature of COFs allows to obtain highly tunable structures that could be easily functionalized with both acceptor or donor groups. Straightforwardly, COFs are starting to be implemented as conductive polymers in photovoltaic applications. COFs are generally constituted by two different organic linkers, that could have a ditopic (C2, two active functional groups), tritopic (C3, three active functional groups) or tetratopic (C4, four active functional groups) geometry leading to 2D or 3D materials. Different monomers can be employed to obtain 2D COFs: indeed, there are not very strict requirements on the choice of starting material (e.g., from bi- to tetradentate monomers). On the other hand, tetragonal and tetradentate monomers are necessary to obtain 3D structures.

COFs are usually synthetized as bulk materials by using boronate esters or imine bond-bridged systems as precursors (Figure 2) [38]. Yet, the so obtained COFs usually have poor electric conductivity in the z axis being constituted by stacked 2D layers. In this context, the introduction of imine-bridged pattern offers a feasible approach to partially extend the conjugation throughout the different layers. Indeed, whereas in boronate COFs the charge preferentially moves alongside the plane directions, imine-based COFs also allow lateral diffusion throughout the frameworks. Therefore, boronate ester-based COFs could be considered as small molecule-based electronics whereas imine-based COFs are generally described as conjugated conducting polymers [4][39]. 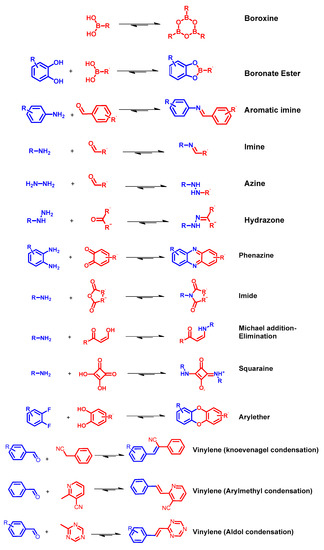 Figure 2. Reported linkage motifs for the realization of crystalline COFs. The reversible condensation reactions were used for the formation of a broad range of COFs.

Nanostructured systems are usually synthetized by solvothermal method allowing the latter to finely control the morphology and the crystallinity of the materials [40][41][42]. However, this approach includes the quite harsh experimental conditions (e.g., aggressive solvents, relatively high temperature, using sealed vessel…) as synthetic method to produce COFs Straightforwardly, researchers have been attempting to figure out new synthetic routes to obtain COFs: i.e., microwave and room temperature synthesis (which are mechanochemical and rapid solution-phase approach) and massive synthesis [43], among others [38].

Prof. Cooper and co-workers attempted first time to use microwave method by synthesizing of COF-5 and COF-102 based on boron linkage [44]. They successfully obtain COFs 200 times faster (i.e., 20 min reaction) compared to solvothermal method (72 h). Furthermore, mechanochemical synthesis is fast and environmentally friendly allowing to minimize the amount of solvents employed and the energy required throughout the synthetic procedure. COFs based on imine-bond were synthesized through this method by Biswal et al. too [45]. A simple and facile room-temperature solution-phase route for the fabrication of spherical COF-TpBD was carried out by Yan's group [46]. The obtained COFs showed quite good thermal stability and very short synthetic times (i.e., 30 min). On one hand, MW and RT synthesis could be usefully employed in the laboratory scale; on the other hand, massive synthesis method could be easily implemented for industrial production of COFs.

Both MOFs and COFs have a unique structure with a great tunability of their organic and inorganic components that confer incredible chemical versatility. For this reason, they can be used in many areas: from capture, storage, separation, and conversion of gases to (photo)catalysis and drug delivery, from optoelectronic to sensors, and from magnetism and ferroelectricity to light harvesting and energy transfer. As far as the photovoltaic field is concerned, they do not have a unique role but, based on their photophysical and chemical properties, they could be effectively employed as photoactive material, electrodes or charge carriers, accomplishing mainly all the single components of a PV device.