The bacterial flagellum is a helical filamentous organelle responsible for motility. In bacterial species possessing flagella at the cell exterior, the long helical flagellar filament acts as a molecular screw to generate thrust. Meanwhile, the flagella of spirochetes reside within the periplasmic space and not only act as a cytoskeleton to determine the helicity of the cell body, but also rotate or undulate the helical cell body for propulsion. Despite structural diversity of the flagella among bacterial species, flagellated bacteria share a common rotary nanomachine, namely the flagellar motor, which is located at the base of the filament. The flagellar motor is composed of a rotor ring complex and multiple transmembrane stator units and converts the ion flux through an ion channel of each stator unit into the mechanical work required for motor rotation. Intracellular chemotactic signaling pathways regulate the direction of flagella-driven motility in response to changes in the environments, allowing bacteria to migrate towards more desirable environments for their survival. Recent experimental and theoretical studies have been deepening our understanding of the molecular mechanisms of the flagellar motor.

Bacterial motility is an extremely intriguing topic from various scientific aspects. For example, motility can be a crucial virulence attribute for pathogenic bacteria, such as Salmonella enterica (hereafter referred to Salmonella) and Helicobacter pylori [1][2]. Bacterial motility also plays a significant role in mutualistic symbioses [3][4]. Furthermore, motile bacteria are also a representative example for understanding the underlying physical principles that form the basis of energy conversion, force generation and mechanochemical coupling mechanisms [5]. Active motilities of bacteria are represented by movement in liquid (e.g., swimming motility in Escherichia coli and Salmonella) and on solid surfaces (e.g., flagella-driven swarming motility in Proteus mirabilis and Vibrio parahaemolyticus, gliding motility in Mycoplasma mobile, and twitching motility in Pseudomonas aeruginosa), and passive motility is typically actin-based locomotion (e.g., Listeria monocytogenes and Shigella spp.) [6]. Since bacterial motility varies among bacterial species, bacteria utilize their own motility system optimized for their habitats.

E. coli and Salmonella use flagella viewable from the cell exterior as a thin, long, helical filament (Figure 1a). On the other hand, the flagella of spirochetes reside within the periplasmic space, and so they are called periplasmic flagella [7]. Whether the bacterial flagella are exposed to the cell exterior or are hidden within the cell body, the flagellum is divided into three structural parts: the basal body as a rotary motor, the hook as a universal joint and the filament as a molecular screw in common (Figure 1b), and flagellar formation and function involves more than 60 genes [8][9][10]. 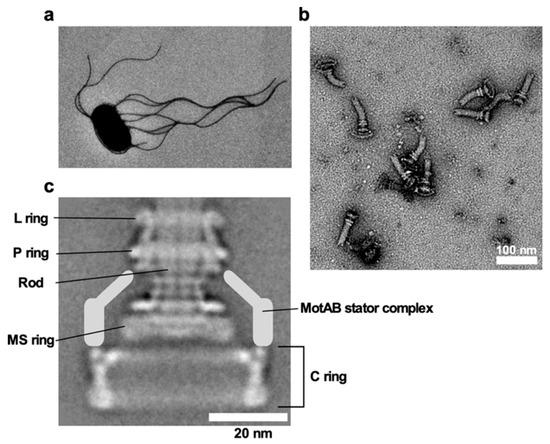 The bacterial flagellar motor is powered by the transmembrane electrochemical gradient of ions, namely ion motive force (IMF) and rotates the flagellar filament to generate thrust to propel the cell body. The maximum motor speed reaches 300 revolutions per second in E. coli and Salmonella [11] and 1700 revolutions per second in a marine bacterium Vibrio alginolyticus [12]. Thus, the rotational speed of the flagellar motor is much faster than that of a manufactured car engine such as formula one car. The flagellar motor is composed of a rotor and multiple stator units. Each stator unit acts as a transmembrane ion channel to conduct cations such as protons (H+) or sodium ions (Na+) and applies force on the rotor [13][14].

The flagellar motors of E. coli and Salmonella rotate in both counterclockwise (CCW) and clockwise (CW) without changing the direction of ion flow. E. coli and Salmonella cells can swim in a straight line by bundling left-handed helical filaments behind the cell body (run) when all of them rotate in CCW direction. When one or multiple motors switch the direction of rotation from CCW to CW, the flagellar bundle is disrupted, enabling the cell to tumble and change the swimming direction. E. coli and Salmonella cells sense temporal changes in nutrients, environmental stimuli, and signaling molecules to coordinate the switching frequency of the motor. Transmembrane chemoreceptors, energy-related taxis sensors and intracellular phosphotransferase systems detect environmental signals and then convert them into intracellular signals. Then, an intracellular signal transduction system transmits the signals to the flagellar motor to switch the direction of motor rotation from CCW to CW. The cells repeat a run–tumble pattern to explore more favorable environments for their survival [15].