Bioactive glass (BAG) consist of known biocompatible and bioactive minerals, including fluorapatite (FAP), wollastonite, diopside, and tricalcium phosphate. A bioactive material can interact with the biological environment to elicit a specific biological response and they can be osteoconductive or osteoinductive. Bioactive Glasses are amorphous solids with the irregular organization of atoms, optically transparent, and brittle consisting of silica networks. They possesses bioactivity and antimicrobial properties as presented n following sections. The bioactivity of BAGs involves several steps; BAGs immediately undergo ionic dissolution and glass degradation via the exchange of H+ ions in the solution and Na+ and Ca2+ from the glass network. BAG exhibits antimicrobial properties against various pathogens, e.g pathogens associated with sinusitis and osteomyelitis.

A bioactive material can interact with the biological environment to elicit a specific biological response, such as the formation of a hydroxyapatite layer with a bond forming between the tissue and material. Bone and teeth, enamel and dentin, consist mainly of mineralized hard tissue in the form of hydroxyapatite , a crystalline calcium phosphate, Ca10(PO4)6(OH)2 [30]. In contrast, bioinert materials do not elicit any specific responses or interact with the biological environment. However, they can result in a foreign-body reaction and the formation of a fibrous capsule. The fibrous capsule may result in micromovements and eventual failure of a prosthesis. Bioactive materials may be osteoconductive or osteoinductive[1]. The most bioactive glass has a superior surface area with a higher dissolution rate and thus faster apatite formation[2]. In addition, they have shown to increase the mechanical properties of such composite for natural bones and provide biomimetic nano-structuration enhancing cell adhesion.

The bioactive properties are influenced by the structure and composition of the glass, manufacturing techniques, and the rate of ionic dissolution. This is clearly illustrated when comparing BAGs to the traditional Bioglass® 45S5. Bioglass® 45S5 possesses several shortcomings which include the possibility of gap formation between the material and host tissues due to a rapid degradation rate[3][4]. The lack of porosity should not only be assigned to the composition but also to the applied process and the degree of particle aggregation[5][6] . Also, a Bioglass® 45S5 may induce cytotoxic effects due to a high rise in pH due to high Na+ and Ca2+ leakage; this may additionally cause delayed hydroxyapatite formation[5][6][7]. The glass composition may not be favorable for the fabrication of porous scaffolds due to poor mechanical properties, such as too fragile[8][9]. Future research needs to improve the mechanical properties of the BAG.

Glasses are amorphous solids with the irregular organization of atoms, optically transparent, and brittle consisting of silica networks and are, therefore, often termed supercooled liquids[10]. Conventional glasses and BAGs differ in one aspect, their rate of dissolution. Conventional glasses, in general, are expected to have high durability and thus low dissolution rates. BAGs require specific dissolution rates for bioactivity. This is achieved by the addition of network modifiers, such as CaO and Na2O, to make the surface and silica network more reactive. From glass dissolution to the formation of hydroxyapatite , bioactivity involves several steps.

Once in contact with body fluids (BF) or simulated body fluid (SBF), BAGs immediately undergo ionic dissolution and glass degradation via the exchange of H+ ions in the solution and Na+ and Ca2+ from the glass network. The ion exchange results in the formation of silanol groups (Si–O–H) due to the hydrolysis of the silica groups. An increased alkaline local environment develops due to the increase in OH- concentration. The silica network is further degraded as the pH rises, forming orthosilicic acid and Si(OH)4 on the surface in the form of a negatively charged gel. The gel layer functions as a matrix for hydroxyapatite with precipitation sites[11]. Beneath the gel layer is a depleted alkaline surface layer on top of the bulk glass. On top of the gel layer, a layer of amorphous calcium phosphate forms. Precipitation and further mineralization occur due to the incorporated carbonate ions from the now supersaturated solution, thus the concentration of Ca- and Si-ions in solution are critical; about 88–100 ppm and 17–20 ppm of the respective ions are required. The newly formed hydroxyapatite enables growth factors to adsorb to the surface, as well as attachment, proliferation, and differentiation of osteoprogenitor cells by cytokines and extracellular matrix components expressed by the upregulation of several genes[11]. Although the tissue bonding properties of the BAG are still not precise, collagen and glycoproteins are believed to incorporate the surrounding bone tissue into the hydroxyapatite layer. As the hydroxyapatite grows inwards, the BAG starts to resorb and gets replaced by growing bone tissue[12]. The glass particles usually have a size of 90–170 μm, which affects their resorption rate. Particle sizes < 150 μm readily degrade as orthosilicic acid is released during the formation of the gel layer. Osteoclasts, once incorporated in the growing bone, break down larger particles[13] resulting in a more extended period of resorption and stronger bone[14].

Dental implants or prosthetic joints are surgically inserted to replace lost tissue and increase the function and quality of life of the patients[15]. However, implants carry a risk of developing infections such as peri-implantitis (PI) or periprosthetic joint diseases (PJI). These infections result in increased morbidity and mortality, as well as resorption of surrounding bone tissue and eventual loosening of the implant. Tomasi and Derks[16] estimated a weighted mean prevalence of 22% for PI. Any artificial joint may develop PJI. PJI occurs in 0.2–9% of prostheses and is one of the most frequent indications of revision and replacement of the joint prosthesis making up for 15% of hip prostheses and 25% of knee prostheses[17]. Infection occurs due to the establishment of bacterial biofilm on the surface of the implant. Biofilm is a layer of microbial communities adhering to a surface via a robust polysaccharide matrix and is known to be about a thousand times more resistant to antibiotic (AB) therapy compared to planktonic bacteria. Bone infections pose an additional challenge of the reduced local effect of antibiotic treatment owing to insufficient vasculature[18] or areas of devitalized bone[19]. Additionally, the increasing prevalence of antibiotic-resistant bacteria, including multidrug-resistant bacteria, results in the ineffective treatment of bacterial infections with antibiotic therapy, including AB-loaded bone substitutes as carriers[20]. Surgical debridement or osseous resection followed by placement of a bone substitute in the defect has shown positive treatment outcomes for established PI cases. PJI can be managed by surgical debridement and AB therapy. However, for resistant pathogens or loosened prosthesis, revision is necessary, which results in reduced quality of life[21].

BAGs, specifically BAG-S53P4, have shown to possess broad-spectrum antimicrobial properties with no observed resistance to date[22]. S. aureus is among the most common bacterial strains implicated in PJIs and a major biofilm contributor. However, S53P4 has proved to reduce the biofilm mass in vitro conditions[23][24]. The antibiofilm activity has further been observed to affect several multi drug resistant strains isolated from PJIs[23]. Additionally, an increased antibiofilm effect is observed with the incorporation of antimicrobial molecules into the BAG[25][26][27]. S53P4 has successfully been used in the treatment of osteomyelitis[28]. The antimicrobial and antibiofilm effects of bioactive glasses differ from that of conventional Abs, as once embedded in the body, bioactive glasses increase the pH and osmolarity locally, which creates an environment unfriendly for bacterial growth and adhesion[25][29]. Bari et al.[26]developed Cu-doped mesoporous SiO2-CaO glass (Cu-MBG) by an ultrasound assisted one-pot synthesis (Figure 1). Cu-MBG nanoparticles showed antibacterial effects against 3 bacterial strains (E. coli, S. aureus, and S. epidermidis). The Cu-MBG can be a promising and versatile platform for bone and soft tissue regeneration. 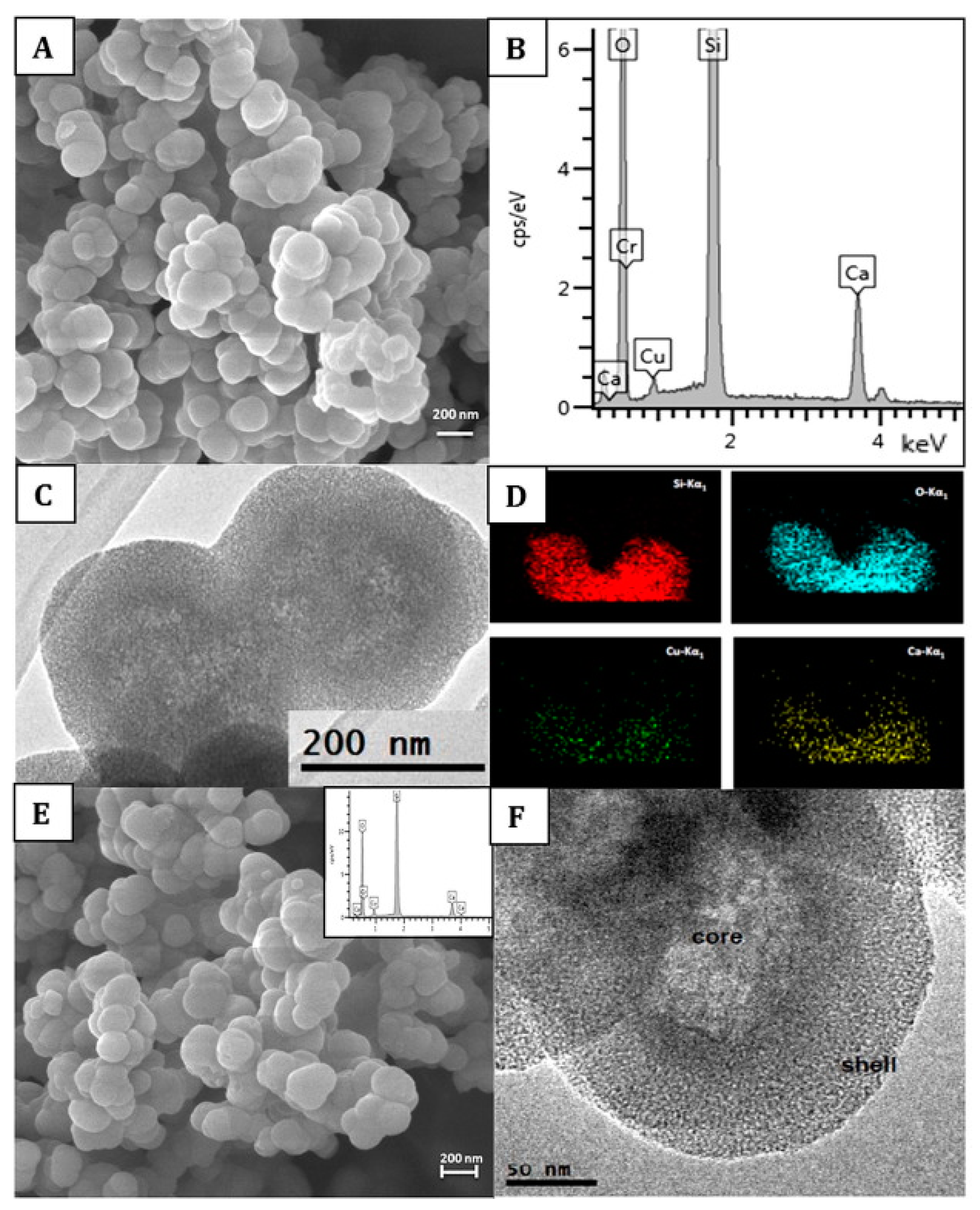 BAG also exhibits antimicrobial properties against pathogens associated with sinusitis, which makes it excellent for sinus augmentation and repairing of the orbital floor defects. A communication often exists between these anatomical structures, and infection from maxillary sinus can quickly spread to an orbital floor implant, necessitating implant removal[36]. Hence, BAG S53P4 can be used for these applications due to slow resorption and antimicrobial effect.

BAG-coated dental implants have shown promising results with reduced bone loss in experimentally induced PI in beagle dogs[37]. A recent in vitro study showed reduced biofilm formation of putative periodontal pathogen strains, in addition to S. mutans[38]. Besides, reduced growth of periodontitis-associated and cariogenic bacteria, as well as Enterococcus facials, has been reported using BAG containing propolis, a naturally occurring compound in beehives[39]. Additionally, BAGs can incorporate hydrophilic as well as hydrophobic compounds into their structure suggesting several undiscovered combinations of compounds may be achievable to increase antimicrobial efficiency[25], strengthening a future antimicrobial role of bioactive glass in dental applications. Another assessment was done on machined Ti6Al4V threaded dental implant coated with hydroxyapatite and bioactive glasses in human jaws, the outcome is very promising and futuristic. The observed BAGs are safe and effective like hydroxyapatite for enhancing osseointegration[40].