Recent advances in the research of therapeutic plant and nanotechnology has been on the increase. Significantly in the green synthesis of metallic nanoparticles (MNPs) because of its numerous gains over conventional methods. Biological conventions for synthesis of silver nanoparticles (AgNPs) and gold nanoparticles (AuNPs) are through the use of nature’s biolaboratory such as plant, microorganisms, alga, carbohydrates and biopolymers . Medicinal plant is a choice natural reserve for different phytochemicals in the synthesis of biogenic MNPs. Thus, they are deemed a green, sustainable, and efficient route for the biosynthesis of MNPs owing to their benign and environmentally friendly nature. In this review we discussed the mode of synthesis strategies and the proposed mechanism of biocidal antibacterial activity of MNPs.  The focus is on the synthesis and possible antibacterial mechanism of specific MNPs such as silver (Ag), gold (Au) and their bimetallic synthesized from plants. This is to give a synergistic view of the efficacy of plant mediated MNPs for the prospect of antibiotic development.

The common methodology used in the synthesis of metal colloidal dispersion is via reduction of metal complexes. Prior to the need for green protocols, chemical agents such hydrazine hydrate and sodium borohydride have been used as reducing and capping agents, but their toxic effects have made them undesirable for biological applications. The biological approach to the synthesis of MNPs has resulted in non-toxic, simple and stable green routes that leads to translational research.

Biological conventions for synthesis of silver nanoparticles (AgNPs) and gold nanoparticles (AuNPs) are through the use of nature’s biolaboratory such as plant, microorganisms, alga, carbohydrates and biopolymers [1][2]. They contain naturally occurring biomolecules that play significant roles in the reduction and capping of NPs [3][4]. Thus, they are deemed a green, sustainable and efficient route for the biosynthesis of NPs owing to their benign and environmentally friendly nature. For biogenic synthesis, simply biological extracts are mixed with the metal salt solutions and the effect of different parameters such as the concentration of the metal salt and extract, pH, temperature, time and radiation are studied [5][6]. Biological extracts comprise of biomolecules like terpenoids, enzymes, coenzymes, phenolics, alkaloids, amino acids, sugars, proteins, etc., that oxidize metal salts from positive oxidation state to the zero oxidation state (Figure 1). These biomolecules in turn determine the size and size distribution of MNPs. A strong reductant in biological extracts cause a rapid reaction rate and facilitates the formation of smaller NPs. Thus, a narrow size distribution is seen if there is a rapid reduction of metal salt by biomolecules, due to the formation of a new nuclei or secondary nuclei. On the other hand, if it happens that the secondary nucleation is suppressed over the primary one, a slow reaction may occur [7]. In addition, these biomolecules serve as a secondary option to form a monolayer on the surface of NPs to prevent agglomeration [18]. 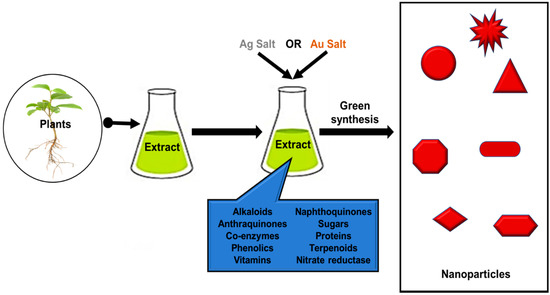 Recent studies of biological extract mediated synthesis of NPs confirm the surface functionalization of nanoparticles with biomolecules, which also improve their bactericidal activity. Thus, improved antimicrobial activity of green synthesized MNPs are due to the biomolecules attached on the surface of NPs [8][9][10]. Table 1 shows an analysis of the discussed plant synthesized NPs.

Silver is known for its inhibitory effect on various pathogenic bacteria found in medical and industrial processes. Biosynthesis of silver nanoparticles has been shown as an easier and benign method compared with chemical methods [11]. A unique property of AgNPs is their large surface area and the fractions found on their surface atoms, which is significant in therapeutic applications [12][13].

Different parts of plant extracts have been used in the synthesis of AgNPs using silver ions as substrates. Dhand et al. [14] reported the synthesis of highly stable crystalline spherical AgNPs (20–30 nm) by exposing the hydroalcoholic extract of Coffea arabica to silver nitrate solution. They reported smaller particle size with a higher concentration of silver nitrate at 0.1 M within 2 h of synthesis at room temperature. The as-synthesized AgNPs had an inhibitory effect against E. coli and S. aureus. Khali et al. [15] reported the synthesis of spherical AgNPs using the aqueous extract of the olive leaf. They observed that smaller size NPs were recorded at an alkaline pH of 8 rather than an acidic pH of 3. Aqueous extract of Ocimum sanctum and its bioactive compound, quercetin, were used for the synthesis of spherical AgNPs by Jain and Mehata [16]. It was reported that quercetin produced a smaller particle size of 11.35 nm and a narrow plasmon peak as compared to the whole leaf extract of Ocimum sanctum with a particle size of 14.6 nm. This suggests that quercetin is a strong redundant present in Ocimum sanctum. Leela et al. [17] studied different leaf extracts of plants, namely, Helianthus annus, Basella alba, Oryza sativa, Saccharu icinarum, Sorghum bicolar, and Zea mays They found that among all the tested plant extracts, H. annus had the strongest potential for rapid reduction of silver ions. Shaik et al. [18] demonstrated the effect of a different volume of the Origanum vulgare extract in the synthesis of a different size of AgNPs. Increasing the volume of the extract produced smaller NPs, which had a bactericidal effect on both Gram positive (+ve) and Gram negative (−ve) bacteria. Padalia et al. [19] used the aqueous extract of the Tagetes erecta flower to synthesis predominantly spherical and hexagonal AgNPs. The as-synthesized AgNPs coupled with commercial antibiotics had a better antibacterial effect than using the commercial antibiotics alone. In our group, we reported the synthesis of spherical AgNPs using the aqueous extract of Combretum erythrophyllum leaf and it was reported to have strong antibacterial activities against Staphylococcus species implicated in dermatological infections [20]. Nouri et al. [21] used the aqueous extract of the Mentha aquatica leaf extract to synthesize spherical AgNPs. The results showed the significant effect of the ultrasound during the synthesis to produce smaller AgNPs (8 nm) with enhanced antibacterial activity by lowering the minimum inhibitory concentration (MIC) as compared to those synthesized with the hydrothermal method. In recent times, bioinspired synthesis of polygonal AgNPs using the ethyl acetate fraction of the alcoholic extract of pomegranate leaves has been reported. The ethyl acetate fraction had a smaller particle size compared to that of the aqueous extract [22]. This suggests that the ethyl acetate fraction had a strong redundant that produced smaller NPs.

AuNPs are desired noble MNPs because of their possible usage in diverse fields of science and engineering such as gene expression and therapy, catalysis, optics, nanoelectronics, nanomedicine and disease diagnosis [23]. Increased toxicity concerns over chemical synthesis routes have drawn considerable interest toward green synthesis of AuNPs. Muthukumar et al. [24] biosynthesized AuNPs using the leaf extracts of Carica papaya and Catharanthus roseus. The mixture of both extracts produced predominantly spherical AuNPs and they had increased antibacterial effects compared with the AuNPs synthesized from the individual plant extract. Patra et al. [25] reported the formation of spherical AuNPs with strong antibacterial effects when synergized with rifampicin and kanamycin. Similarly, other researchers confirmed the synthesis of gold nanoparticles using different plant parts such as the stem extract of Cannabis sativa (Indian hemp) [26], fruit extracts of Amomum villosum [27] and leaf and fruit extract of Pistacia atlantica [28]. Hamelian et al. [29] reported the formation of AuNPs from the aqueous extract of thyme. Awad et al. [30] reported the use of Olea europaea fruit extract and Acacia nilotica husk extract mixture as a bioreductant for the synthesis of AuNPs, which showed a significant antibacterial effect against K. pneumoniae, and Pseudomonas spp. As reported by Kumar et al. [31], Croton caudatus Geisel leaf extract was able to reduce chloroauric acid in twenty-five minutes to form stable and spherical AuNPs. The formation of gold nanowires was reported from the pulp extract of Beta vulgaris. The mechanism for the formation of the nanowires was by Brownian motion; small NPs dissolved in the solution, grew to larger ones and joined together via Brownian motion to form wire-like structures [32]. Very recently, Akintelu et al. [33] reported the synthesis of spherical and stable gold nanoparticles using pulp of Garcina kola at pH 7. Similarly, Wongyai et al. [34] studied the biosynthesis of AuNPs using the aqueous extract of Cryptolepis buchanani Roem to produce highly stable, small-sized AuNPs with a uniform spherical shape at pH 7. The stability confirmed by the zeta potential analysis was −30.28 mV.

Bimetallic nanoparticles (BMNPs) technically excel their mono metallic counterparts due to their improved electronic, optical and catalytic properties [35]. Aside from the morphological manipulations, the variations in the molar ratio of different components offers a diverse dimension in adapting the properties of BMNPs [35][36]. BMNPs, comes in various forms such as an alloy, core–shell and contact aggregate (dumbbell or bamboo-like). This is seen in the surface plasmon resonance peak either as a single (alloy) or multiple (core–shell/contact aggregate) [37][38] (Figure 2 and Figure 3). Among a wide range of BMNPs, silver and gold nanocompositions have gained significant advancement in drug delivery and nanomedicine [39]. Elemike et al. [38] reported synthesis of the Ag-Au alloy using the aqueous extract of Solidago canadensis. They observed the shape of the alloy to be similar to that of AuNPs alone. This was also confirmed by the higher concentration of Au in the EDX spectra. In a similar manner they also reported the synthesis of a nanoalloy Ag-Au BMNPs using the leaf extract of Stigmaphyllon ovatum [40]. Gopinath et al. [41] employed the use of Gloriosa superba for the synthesis of the Ag-Au nanoalloy. They observed that the BMNPs had a more efficient antibacterial activity effect on Bacillus subtilis than individual NPs. This was proposed to be due to the synergistic effect of the metals. Kumari et al. [42] reported the formation of nanoalloy Ag-Au BMNPs by using the juice of pomegranate seeds as a bioreductant. Recent studies by Emma [43] reported the production of nanoalloy Ag-Au BMNPs using a green approach by Arabic gum. It was observed that increasing the reaction temperature from 25 to 70 °C resulted in a well dispersed and smaller bimetallic NPs, which led to a size reduction from 6.5 to 3.1 nm. In another recent development, Gupta et al. [44] used aqueous leaf extract of Moringa oleifera for the biofabrication of the stable Ag-Au nanoalloy with a zeta potential of −36.7 mV.

Figure 2. Schematic illustration of three mixing patterns in zero-dimensional bimetallic nanomaterials: (A) core–shell, (B) dumbbell and (C) alloyed (adapted with permission from [37], Elsevier, 2013).

Figure 3. Schematic illustration of three mixing patterns in one-dimensional bimetallic NMs: (A) core–shell (B) alloyed and (C) bamboo-like (adapted with permission from [37], Elsevier, 2013).