Resting metabolic rate (RMR) reflects the energy expended by the human body in a prolonged resting state in the absence of food digestion, physical or cognitive activities. RMR declines with age and has been related to changes in body composition and health status. In this study we aimed to assess whether having specific age-associated diseases, or the development thereof, correlate with RMR changes over time. Information on such associations is important to understand the energetic burden of specific diseases and whether early perturbation in energetic metabolism can inform impending health deterioration and future pathology.

Resting metabolic rate (RMR) changes over the life span and has been related to changes in human health. RMR reflects the energy expended by the human body in a prolonged resting state, and can be understood as the “cost of living”, i.e., the energetic cost of maintaining all physiological processes that preserve homeostatic equilibrium. RMR is affected by changes in body size, with greater RMR associated with larger body size, especially large lean body mass [1]. RMR is widely determined by the most metabolically active tissues, such as muscle, heart, brain, and liver, and, as the function and metabolic activity of these organs and tissues decline with aging, RMR also declines with aging. The decline of RMR with aging has been partially, but not completely, explained by changes in body composition, and by the decline of lean mass more than by that of fat mass. A lower RMR is observed in women, and this finding too has not been completely explained by differences in body composition. It has been suggested that the changes in body composition and parallel changes in RMR are due to the emergence of pathology, although the specific mechanism and directions of this association are still not clarified.

In an analysis of data from the Baltimore Longitudinal Study of Aging (BLSA), subjects in good health and functional status had lower RMR than those affected by chronic diseases and functional limitations, independent of age, sex and body composition [2]. Also, independent of relevant confounders, higher RMR was cross-sectionally associated with a higher number of chronic diseases and a higher risk of developing multimorbidity, defined as two or more out of 15 chronic conditions [3]. Similarly, in community-dwelling women 60 years and older, increasing multimorbidity was associated with an increase in RMR independent of body composition and age [4]. Overall, these data suggest that while healthy aging is associated with a progressive decline of RMR, independent of changes in body composition, superimposed adverse changes in health and functional status tend to attenuate such decline. This attenuation has been attributed to the potential extra-energetic cost of maintaining homeostasis in response to disease-related processes [5]. However, a comprehensive analysis of how various diseases that ensue with aging affect age-associated changes in RMR is still lacking. In this analysis, we aimed to assess whether having specific age-associated diseases, or the development thereof, correlate with RMR changes over time. Information on such associations is important to understand the energetic burden of specific diseases and whether early perturbation in energetic metabolism can inform impending health deterioration and future pathology.

Statistical analyses considered covariates such as sex (encoded as 1 = male, 0 = female), age, total body fat mass, and total body lean mass, since it is well known that these variables contribute to basal energy expenditure. Parameters such as smoking status, alcohol intake, physical activity level, height and weight, and subcutaneous or visceral distribution of the adipose tissue (assessed through computed tomography) were considered as possible covariates but then removed from the models when they did not contribute significantly to model fit. P < 0.05 was considered statistically significant. Linear regression models were run to test the cross-sectional associations of RMR with the presence of each of the 15 selected conditions, adjusting for sex, age, lean body mass, and fat body mass as measured by DEXA. Linear mixed effect (LME) models were used to estimate the longitudinal rate of change in RMR. Two hypotheses were evaluated: First, we tested whether participants affected by one specific chronic condition at baseline experienced different changes in RMR compared to those who did not have that condition at baseline (no disease). Secondly, we tested the hypothesis whether the development of a chronic condition over the follow-up period (i.e., incident disease) was associated with changes in RMR differently from those participants who remained free from that condition.

T2D and cancer were positively and significantly correlated with RMR values at baseline, as represented in Figure 1. Noteworthy, older age and both lean and fat mass were significantly associated with RMR, although on average the value of the β coefficients per kg of estimated lean body mass was 4-fold higher than the coefficient for fat mass. 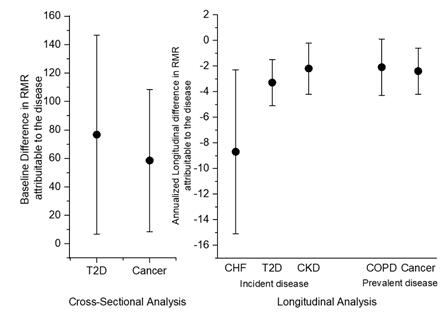 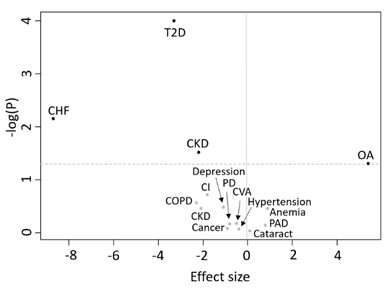 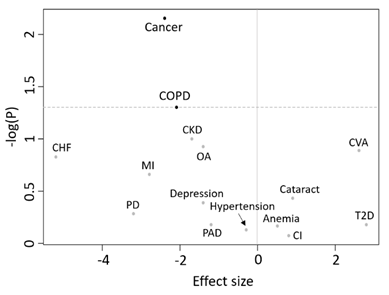 A number of studies have shown that chronic inflammation is associated with aging and age-associated chronic diseases and may contribute to increased catabolic rates and age-associated changes in body composition, including sarcopenia and muscle wasting [6]. Based on the results of this study, we hypothesize that muscle wasting, reduced physical activity, and inflammation are part of a vicious cycle that complicates the clinical course of many chronic diseases and could have different impacts on the energetic “cost of living” depending on the specific phase of the natural history of such diseases. While in the initial and overt state of clinical manifestations, conditions may stimulate a repair response that requires extra-energy to maintain or regain homeostatic equilibrium; in the long term, their profound impact on body composition, especially parenchymatous organs, which may not be fully captured by the available methods, may lead to substantial reduction of RMR.

The cross-sectional association between cancer and higher basal metabolism we observed is not surprising, since among the modifications that occur in a cancerous cell there is an increase in energy needs to support accelerated growth and survival. Cancerous tissue competes for nutrients with neighboring tissues and this is believed to be the main cause of the progressive and often deleterious cachexia that commonly occurs in patients with malignant tumors. Furthermore, a very tight connection exists between cancer development and progression and inflammation, which could constitute another mechanism of elevated energy metabolism [7].

The findings regarding the cross-sectional association between T2D and increased basal metabolism are consistent with previous studies [8]. Several mechanisms have been proposed to explain this association, including increased protein turnover, futile substrate cycling, gluconeogenesis, plasma glucagon concentrations, and sympathetic nervous system activity [9]. Inflammation has been tightly connected to the development of insulin resistance and T2D, therefore constitutes another potential explanation for augmented energetic expenditure [10].

Expectedly, CHF was longitudinally associated with a steeper decline in RMR as CHF has long been connected with a deleterious wasting syndrome, termed cardiac cachexia, a strong prognostic factor for CHF [11]. Loss of body mass with CHF, and of muscle mass in particular, could be the process underlying the decrease in RMR over time observed in this analysis. Adjusting for body composition in our statistical models did not change this association. However, DEXA may capture macroscopic volumetric differences in the various compartments but not more subtle structural modifications that may profoundly impact metabolism and energy consumption. The same concept could be applied to other diseases showing an association with declining RMR including CKD, cancer and COPD, which are among the main causes of cachexia and muscle dysfunction [12][13]. Although changes in body composition are part of the natural history of these diseases, the measured changes did not account for the decline in RMR, which could be related to a more intrinsic tissue or cellular alteration. T2D is also tightly associated with modifications in body composition and has been related to impaired muscle strength and quality [14].

OA was the only condition associated with an increase in RMR over time, with marginal significance (p = 0.05). OA is characterized by an inflammatory pathogenesis, potential mechanism underlying this observation.

In conclusion, the combined effect of chronic diseases and aging seems to exert a two-phase differential effect on body composition and energy consumption. In the initial response phase, the RMR increases because strategies to maintain a homeostatic equilibrium in presence of a disease are energetically more expensive than normal physiological mechanisms of a healthy person. With depletion of reserve capacity, energy is scarce, and catabolism becomes the prevalent process, with complex changes in body composition not fully captured by traditional technology. Further research on larger populations is needed to confirm these results and obtain more complete information. Outlining the pathways through which a pathological condition affects the energetic balance of the human body could provide more complete knowledge about the condition itself, an increased awareness of the metabolic trends in healthy aging in contrast to health deterioration, and a better understanding of the mechanisms employed to contrast or respond to an insult. Furthermore, defining a specific pattern of progressive metabolic change resulting from an active pathological process could eventually allow clinical inferences in relation to staging and prognosis.