Kawasaki disease (KD) is an acute childhood vasculitis syndrome that affects the walls of both small- and medium-sized blood vessels (vasculitis), especially coronary arteries. Anemia is a common clinical feature in KD patients and is thought to have a more prolonged duration of active inflammation. In this review, we will discuss the anemia in KD, possibility of hemolysis, the necessity of iron supplementation and importance of anemia in the pathogenesis of KD.

Kawasaki disease (KD) is an acute childhood vasculitis syndrome that affects the walls of both small- and medium-sized blood vessels (vasculitis), especially coronary arteries.[1] KD is characterized by prolonged fever, conjunctivitis, diffuse mucosal inflammation, polymorphous skin rashes, indurative edema of the hands and feet associated with peeling of finger tips and nonsuppurative lymphadenopathy.[2] In addition to standard diagnostic criteria, KD patients may experience a variety of nonspecific clinical features, including uveitis, aseptic meningitis, abdominal pain, gallbladder hydrops, rash at the bacillus Calmette-Guérin inoculation site, impaired liver function, hypoalbuminemia, and anemia.[3] Of these, anemia is the most common clinical feature in KD patients and is thought to have a more prolonged duration of active inflammation.[4] A dataset of 783 people, including 441 patients with KD and 342 febrile controls, demonstrated that hemoglobin level was among seven variables to have the largest differential diagnostic absolute values of coefficients.[5] Furthermore, Lin et al. observed that hemoglobin is a useful marker for differentiating KD shock syndrome from toxic shock syndrome in a pediatric intensive care unit.[6]  In our age-matched 27 health controls and 117 KD patients, hemoglobin levels are increased at three weeks after IVIG treatment, and hemoglobin levels are fully recovered at the 6-month follow-up. (Figure 1) Therefore, we suggest that iron supplementation is not necessary for KD patients.

2. Is the hemolysis the major cause of Kawasaki disease?

As we know, haptoglobin is the marker of acute hemolysis when it drops or acute phage protein when it increases, respectively. Consistently, there are significant higher haptoglobin levels in patients of KD before, and post-immunoglobin (IVIG) than in controls. It reflects hemolysis is not the major reason of anemia for KD patients before IVIG. Although severe hemolytic anemia requiring transfusion is rare, it may be related to IVIG infusion.[7] The major causes of hemolysis are generally associated with anti-A and anti-B IgM antibodies, as well as the anti-Rh IgG antibody.[8] In fact, the IVIG products that are used today are usually safe and effective; they are composed of at least 98% of IgG and very low titers of anti-A (1:8) and anti-B (1:4) IgM but no anti-D IgG antibodies. Furthermore, Rh negative blood types are much less common in Asian populations (0.3%) than in Caucasian populations (15%). The phenomena and literature regarding hemolysis after IVIG in KD patients may thus be more commonly reported in European ancestry than Asian ancestry.

3. Hepcidin-Induced Iron Deficiency is the major reason of anemia in KD patients

In 2000, Krause et al. described a peptide that was first referred to as liver-expressed antimicrobial peptide-1, or LEAP-1 and was later called ‘hepcidin’ due to its hepatic expression and antimicrobial activity.[9] Hepcidin is understood to have a crucial function in blocking the following iron flows into plasma: duodenal absorption, release from macrophages, mobilization of stored iron from hepatocytes, and the last one being related to the anemia of inflammation. We have previously reported that both plasma hepcidin and IL-6 levels were elevated in KD patients before undergoing IVIG therapy than in febrile controls.[10] Hepcidin not only controls iron absorption but also has a direct inhibitory effect on erythropoiesis.[11] Furthermore, hepcidin has also been demonstrated to directly influence erythroid precursor proliferation and survival as erythroid colony formation,[12] which agrees with the observation of a transient erythroblastopenia in bone marrow aspiration in KD patients.[13] Following IVIG treatment, both hepcidin and IL-6 levels decreased significantly. Interestingly, hepcidin level changes were related to IVIG treatment resistance and CAL formation, which supports the theory that elevated inflammatory markers and IVIG non-responsiveness may be related to CAL development in KD patients. Aspirin-related practices have been administered in KD treatment for the past couple of decades, even prior to the administration of IVIG. We reported in one study of a total of 851 KD patients that high-dose aspirin in acute-phase KD does not confer any benefits on disease outcomes and may even be harmful with regard to reducing disease inflammation.[14] Furthermore, this is the first study to show that high-dose aspirin actually results in lower hemoglobin levels and hinders the ability to decrease hepcidin levels after IVIG treatment. Therefore, high-dose aspirin may not be a necessary part of treatment in acute-phase KD.

Hepcidin is encoded by the HAMP gene and we also demonstrated that HAMP promoter hypomethylation can explain the remarkable upregulation of hepcidin in KD patients.[15] During inflammation or infection, hepcidin can bind to ferroportin, which is an iron exporter that presents on the absorptive surface of hepatocytes, duodenal enterocytes, and macrophages.[16] The remarkable upregulation of hepcidin induces transient anemia and hypoferremia in the acute inflammatory phase of KD. However, little is known about whether hepcidin regulation on iron homeostasis influences the ability of the macrophage polarization program and the molecular machinery involved in KD disease processes.

Inflammation-induced hepcidin can induce transient hypoferremia, anemia, and disease outcomes in acute-phase KD (Figure 1 and figure 2), and further insightful research is required to better clarify the role of hepcidin in the pathogenesis of KD. 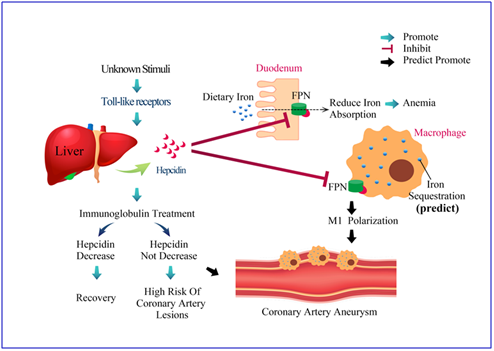 Figure 2. The proposed mechanism of hepcidin-induced transient anemia and coronary artery lesions in patients with Kawasaki disease. While the exact etiology of Kawasaki disease (KD) remains uncertain, we have reported that KD stimulated the extraordinary up-regulation of most TLRs that upregulate hepcidin expression. After hepcidin interacts with ferroportin, ferroportin becomes internalized and degraded, ultimately leading to intracellular iron sequestration and decreased iron absorption from duodenum. Hepcidin not only controls iron absorption but also has a direct inhibitory effect on erythropoiesis, which is lead to transient hypoferremia and anemia in KD patients. Macrophage iron homeostasis is correlated with the functional polarization and plasticity of these cells. Doing so makes M1-macrophages a major iron storage site under inflammatory conditions. However, little is known about whether iron homeostasis influences the ability of the macrophage polarization program and molecular machinery involved in KD disease processes.