Subjects: Others
View times: 94
Submitted by:

Photodynamic therapy (PDT) is limited due to the shallow penetration depth of light sources into tumor tissue. In previous studies, we used X-ray as an alternative light source which provided a novel therapeutic approach for deep-seated tumor/cancer treatment[1][2][3]; however, the annual radiation dose limit was another issue. Thus, an alternative therapy with fewer side effects was proposed by Umemura and Yumita, called ‘‘Sonodynamic therapy (SDT)’’[4]. SDT can focus the ultrasound energy on the deeply located tumor site, which overcomes the shortcoming of PDT. SDT is considered to be a safer and more acceptable therapy for patients compared to radiotherapy and chemotherapy[5]. It is noninvasive, and the apparatus is relatively inexpensive[6][7].

SDT consists of three basic elements: ultrasound, sonosensitizer and oxygen molecules. The mechanism of SDT is that the nonthermal effect of acoustic cavitation generated by sonoluminescence, and the sonoluminescent light activates the sonosensitizer, leading to the electronic excitement of the sonosensitizer[6]. When the excited sonosensitizer decays back to the ground state, the released energy transfers to oxygen to generate the highly reactive singlet oxygen (1O2)[8]. Meanwhile, the energy may lead to pyrolysis reaction of the water near the exposed site of ultrasound and generate hydroxyl radicals (•OH). These reactive oxygen species (ROS) may cause the death of the tumor cells afterwards[9]. ROS plays an important role in cellular signaling pathways, such as metabolism, growth, differentiation and death signaling, and react with molecules by reversible oxidative modifications. Excess generation of ROS may cause cell senescence and death to intracellular biomacromolecules, such as protein, lipid, RNA and DNA, via oxidative damage[10].

Ultrasound is a mechanical wave with periodic vibrations in a continuous medium at frequencies greater than 20 kHz[11]. Ultrasound is able to penetrate tissue with less attenuation of energy. Therefore, it can be applied to medical diagnosis and therapeutic use. For a medical diagnosis purpose, the ultrasound is irradiated at a frequency of 2.0 to 28.0 MHz with low-energy irradiation to prevent tissue from damaging. For therapeutic use, the ultrasound is irradiated at a frequency of 0.5 to 3.0 MHz with higher doses of energy to generate the desired biological results[12]. For SDT, low-intensity ultrasound is used to induce the non-thermal and sono-chemical effects to activate sonosensitizer to cause the damage and even the death of tumor cells[13]. The non-thermal effect of ultrasound in SDT is cavitation that involves formation, growth and collapse of cavitation bubbles[6]. Under ultrasound irradiation, the static pressure of the aqueous solution decreases below the vapor pressure, and water may evaporate into gas bubbles. The cavitation bubbles nucleate in the presence of impurities or pre-existing bubbles in solution and oscillate in the phase under irradiation[14]. During the ultrasound irradiation, bubbles grow increasingly larger and stop growing when the static pressure equals the vapor pressure. They may start to break down from its weakest spot when the static pressure exceeds the vapor pressure, and then collapse (known as inertial cavitation) led to a highly concentrated energy release[15][16]. The released energy leads to the pyrolysis reaction of the water, which generate (•OH) and short light pulses (known as sonoluminescence)[17]. Sonoluminescence involves intense ultraviolet-visible light, which can excite sonosensitizer to generate ROS[18].

Sonosensitizers play a critical role in SDT that can enhance the effect of ultrasound. The development of sonosensitizers had grown swiftly in recent decades due to the known mechanisms of cell apoptosis for SDT[19]. The porphyrin-based sonosensitizers, such as photofrin, hematoporphyrin, 5-ALA (5-aminolevulinic acid) and chlorin-e6, are the most often used sonosensitizers in SDT research[6]. However, porphyrin-based sonosensitizers have phototoxicity on the skin that may affect both tumor cells and normal cells under a certain wavelength of light or energy irradiation in PDT studies, which means that this issue may also take place in SDT[19]. On the other hand, most sonosensitizers were hydrophobic and easy to aggregate in physiological condition, leading to a reduction in their ROS production[20]. Nonetheless, the development of nanoparticles shows a promising potential to solve these problems. Among many nanosensitizers, titanium dioxide (TiO2) has attracted the most attention due to its properties[20]. TiO2 is widely used in many territories based on low toxicity, high stability, high photocatalytic activity and low cost[21][22]. Compared to porphyrin-based sonosensitizers which are quickly degraded under oxidizing conditions, TiO2 exhibits high stability because it is highly resistant to degradation by ROS. TiO2 exhibits three kinds of crystal structures, namely anatase, rutile and brookite. Anatase and rutile are the most common in the utilization of crystal structures, and brookite is less used in industrial application. Even though anatase (Eg = 3.2 eV) has a wider bandgap than rutile (Eg = 3.0 eV), anatase shows higher photoactivity due to its larger specific surface area that anatase is more suitable to be used as a photocatalyst[23]. In previous studies, the anatase structure of TiO2 has been utilized as a sonocatalyst to generate ROS under ultrasound irradiation[9][13]. Nonetheless, the wide bandgap of anatase requires a greater energy to trigger. Carbon has previously been doped in the semiconductors to form a new valence band, thus narrowing the bandgap[24]. The addition of carbon may give TiO2 an excess of conducting electrons or holes which is important for lowering the bandgap[22][23].

TiO2 is one of most representative material studied in inorganic sonosensitizers. Nonetheless, the low quantum yield of ROS limits the effectiveness of TiO2 as a sonosensitizer by rapid recombination of the free electron and electron hole. The addition of noble metals, such as Pt and Au, have been reported to retard carrier combination[25][26]. Pt-doped or Au-doped TiO2 has been confirmed to show therapeutic efficacy and suppress the growth of tumors significantly. However, the price of novel metals would increase the cost of material preparation dramatically. Carbon shows highly promising dopant to narrow the bandgap, reaching similar therapeutic efficacy to a novel metal-based system in a more economical way. The comparative table is listed in Table.

Table 1. The sonosensitizers and the matched ultrasound parameters.

The unstableness of the excited state may cause decay back to the ground state, leading to energy release. The released energy may transfer to oxygen to generate the highly reactive singlet oxygen and water to generate hydroxyl radicals (Figure 1). With the increasing concentration of singlet oxygen and hydroxyl radicals, 4T1 cells would be gradually damaged and lead to cell senescence and death due to oxidative damaging effects[10][30][31]. Due to the enhanced permeability and retention (EPR) effect, C-doped TiO2 preferentially accumulates in tumor cells eliciting efficient ROS generation[32] and further increasing the effectiveness of the SDT treatment. It was also revealed that the suppression of the tumor is due to the elevated level of ROS which results in both direct tumor cell death and blood vessel stasis. ROS can induce blood stasis via platelet aggregation or vessel constriction by destroying the endothelial layer[33]. Furthermore, SDT may elevate the level of inflammatory-associated cytokine (including TNF-alpha, IL-6, IL-1) production which is known to stimulate the maturation and function of granulocytes and macrophages[34]. 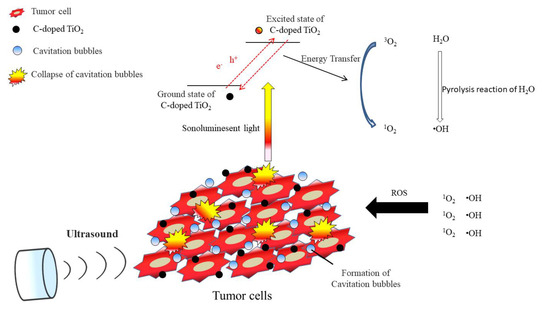