Although pure titanium and titanium alloys are highly biosafe, there are many reports of patients with metal allergies caused by titanium. In addition, it was used as a prosthesis in the oral cavity, such as the black triangle in which the gingiva turns black due to the gradual elution and deposition of metal ions in the titanium alloy, and the black margin generated when the gingiva lowers and the metal part is exposed. In some cases, there are also aesthetic issues.
Zirconia is attracting attention as an alternative material to such problems. Zirconia is excellent in aesthetics and biosafety, and with the progress of CAD / CAM technology, its application in various applications has begun, and yttria-stable zirconia has already been put into practical use as a dental implant.
However, yttria-stabilized zirconia, which is generally used as dental ceramics, is more brittle than metals such as titanium and has less bending properties, so there is a risk of breakage. Although yttria-stable zirconia is harder than metal, it is brittle once it is distorted, and it is a technical issue that the strength decreases when low-temperature deterioration occurs due to phase transition due to long-term use in a wet state such as in the oral cavity.
On the other hand, ceria-stable zirconia-alumina composite ceramics have the same hardness as yttria-stable zirconia, and also have extremely excellent toughness, eliminating the weaknesses of ceramics such as brittleness and low-temperature deterioration in wet conditions. It is attracting attention as a ceramic.
This ceramic has a nano-composite structure in which nano-sized alumina particles are incorporated into ceria-stable zirconia particles, and nano-sized ceria-stable zirconia particles are inter-dispersed in the alumina particles. , Nano zirconia). Nano zirconia has a high bending strength equivalent to that of general zirconia, and has a very high fracture toughness of 3 to 5 times that of general zirconia. Due to its high toughness as well as its strength, it is expected to be used in implan.
However, nanozirconia is inferior in bone formation after implant placement compared to titanium, so surface modification is required for application as a medical device. So far, surface modification of nanozirconia has been investigated by concentrated alkali treatment, etc., but it is equivalent to titanium or titanium alloy, although it has a certain effect on the initial attachment of bone marrow cells or the induction of differentiation into hard tissue. Biocompatibility has not been achieved.

In the field of dentistry, yttria-stable zirconia (YSZ) and ceria-stabilized zirconia/alumina nanocomposites (nano-ZR) show superior mechanical properties, biocompatibility, and aesthetic performance. Zirconia-based materials are also superior to titanium implants in terms of discoloration and responsiveness [1][2]. At the tissue level, the biocompatibility of zirconia is comparable to that of titanium [2][3][4]. Rough zirconia implants have higher removable torque values than control implants, but not at the levels observed with titanium implants [5][6][7][8][9]. Therefore, various surface-roughening techniques have been investigated to enhance the biological activity and osseointegration capabilities of titanium, including physical approaches such as compaction of nanoparticles [10], ion beam deposition [11]; chemical methods such as acid etching, peroxidation [12], and anodization [13]; nanoparticle deposition such as discrete crystalline deposition [14] and lithography and contact printing technique [15]; however, little is known about the clinical effects of zirconia implants. As the speed and quality of osseointegration are closely related to the implant surface properties, titanium and zirconia implant surfaces meet the optimal response and high biocompatibility requirements of the adjacent osteogenic cell population [16][17][18]. The cell/tissue development, chemical composition, energy, topography, and roughness at the tissue–biomaterial interface are the most studied surface properties for regulation of bone formation [18][19][20].

Nano-ZR is a nanocomposite in which nanometer-sized alumina particles and ceria-stabilized zirconia particles are dispersed in ceria-stabilized zirconia and alumina crystals, respectively. It has flexural strength and fracture toughness higher than the respective corresponding parameters of yttria-type zirconia materials widely used in dentistry, as described by Nawa et al. [21][22]. Additionally, compared to 3Y-TZP, nano-ZR is resistant to the low-temperature degradation that affects zirconia [23][24][25]. The fatigue strength of nano-ZR, as measured by the cyclic test, is twice than that of 3Y-TZP [21][22].

Li et al. have reported that the apatite layer formed on the surface of titanium and titanium alloys by alkali treatment is involved in osseointegration [26]. It has also been reported that acid treatment results in changes in the surface structure of titanium and zirconia surfaces, and plays a role in rat bone marrow cell behavior and hard-tissue formation [27][28][29]. In previous studies, the concentrated alkali treatment of titanium and titanium alloys was shown to induce hard-tissue differentiation [30][31][32][33][34][35][36]. Nanostructures formed on the material surface affected both protein adsorption and cell behavior, thereby indicating that alteration of the surface structure could be advantageous for osteointegration. We have shown that alkali-modified nano-ZR can accelerate osseointegration both in vitro and in vivo. Alkali-modified nano-ZR helps improve early adhesion and differentiation of rat bone marrow mesenchymal stem cells compared with unmodified nano-ZR surfaces [37][38]. These results suggest that alkali-modified nano-ZR is useful as a novel implant material, similar to the previously reported use of alkali-modified titanium [37]. Our latest study has also shown that alkali-modified nano-ZR treatment is effective for peri-implant hard-tissue formation [37][38]. However, compared to the biocompatibility of titanium surfaces with controlled nanostructures, the biocompatibility of alkali-treated nano-ZR is insufficient, and therefore development of new surface treatments is needed.

Plasma biology is a new interdisciplinary research area [39]. The range of uses of plasma processing continues to expand, and it is being applied to various fields. Currently, functionalization of the biological material surface to improve biocompatibility is being used to strengthen biologically equivalent coatings [40][41][42]. The relationship between plasma treatment of implant material surfaces and hard-tissue formation has been reported in several studies [43][44][45][46]. In the past few decades, several methods have been used to generate plasma at near-atmospheric and ambient temperatures, such as radio frequency plasma [47], dielectric barrier discharge plasma [48], corona discharge plasma [49], and glide arc discharge plasma [50]. The general advantage of these techniques is that they allow the formation of a large number of reactive species used for surface, gas, and aqueous treatments. Owing to the large size of the plasma device that is applied clinically, downsizing of the plasma generator is an important goal. The purpose of these technologies, such as piezo direct discharge plasma, is to produce as thin and small a plasma device as possible from viewpoint of clinical applications. However, devices that perform plasma processing are very large in size and are not practical for clinical applications. In contrast, the plasma device used in the present study is relatively small, easy to use, and very useful in clinical settings. We have already reported that atmospheric pressure plasma treatment of titanium implants increases the hydrophilicity of the material surface and affects the initial adhesion of rat bone marrow mesenchymal stem cells (rBMMSCs) as well as the ability to induce hard-tissue differentiation. Therefore, this procedure may also be applied to other materials such as zirconia [51].

The evaluation of nano-ZR samples is depicted in Figure 1. No change was observed in the mechanical structure of the material surface by scanning electron microscopy (SEM) analysis and scanning probe microscopy (SPM) analysis. X-ray photoelectron spectroscopy (XPS) analysis showed an increase in the O1s peak and a decrease in the C1s peak on the material surface of the test group. (Figure 1). Plasma treatment showed a remarkable decrease in contact angle on the surface of the material, resulting in superhydrophilicity in the test group (Figure 1). 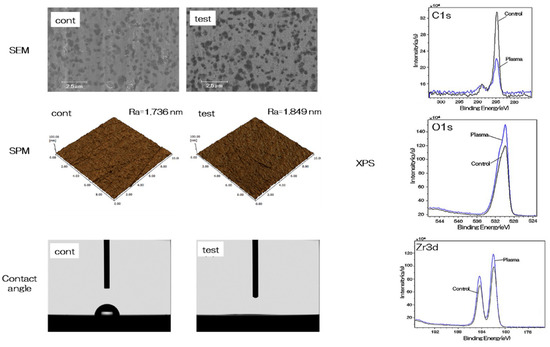 3. Evaluation of Protein Adsorption on the NANO-ZR Surface.

The adsorbed amount of bovine serum albumin (BSA) on the material surface of the test group was significantly higher than that of the control group at all measurement times (Figure 2). 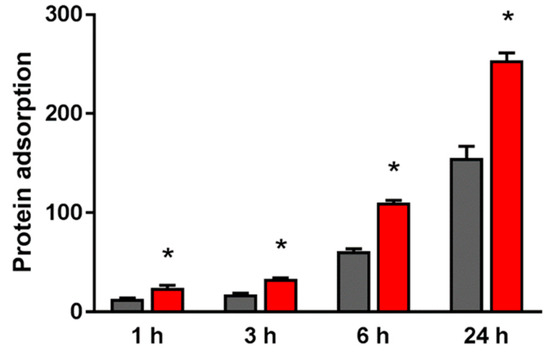 Figure 2. The adsorption amount of BSA on the material surface of the test group (red) and that of the control group (black). * p<0.05.

4. Effects of the Nano-ZR Surface on Cell Adhesion and Morphology in rBMMSCs and HUVECs

The morphology of rat bone marrow mesenchymal stem cells (rBMMSCs) and human umbilical vein endothelial cells (HUVECs) on the nano-ZR surface after 24 h of culture was observed with a fluorescence microscope. It was confirmed that various cells adhered to the surface of the materials in both groups (Figure 3). Simultaneously, an increase in the number of cells and elongation of cell projections was observed on the material surface of the test group compared with that of the control group. In this experiment, cell morphology was observed and the number of cells on the surface of each material was compared. At all measurement times, the adhesion number of rBMMSCs and HUVECs in the test group was significantly higher than that in the control group. 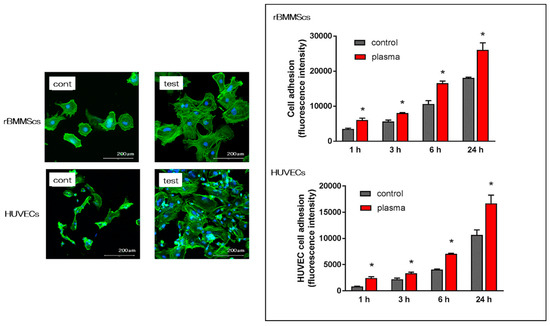 Figure 3. As a result of observation after 24 hours of culture with a fluorescence microscope, images showing cell adhesion of rBMMSCs and HUVECs were observed on the material surface in both groups. By alkali and plasma treatments, elongation of cell processes of both cells was observed. In addition, when the number of initial rBMMSCs adhesion and HUVECs was compared at each culture time, it was found that the number of cell adhesion increased with the passage of culture time. Furthermore, the material surface of the test group showed a statistically significantly higher value than that of the control group at all measurement times. * p<0.05.

5. Evaluation of Hard Tissue Differentiation and Angiogenesis of rBMMSCs and HUVECs on Nano-ZR in vitro 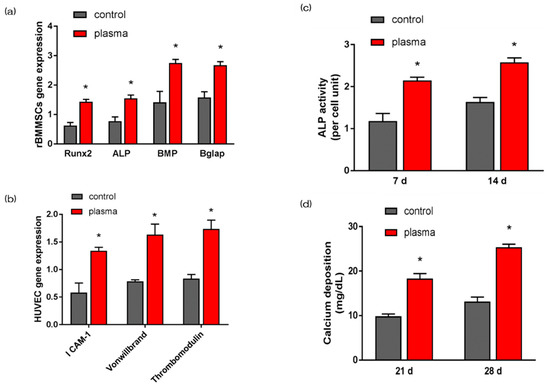 6. Evaluation of the Amount of New Bone Formation in the Tissue Surrounding the Nano-ZR Implant Placement in vivo

More trabecular microarchitecture was observed in the area of the material surface in the test group than in the area of the control group (Figure 5). Furthermore, the ratio of bone mass to total mass (BV/TV), average trabecular number (Tb.N), and average trabecular thickness (Tb.Th) were significantly higher in plasma TNS samples and plasma treated samples. Implants promoted osteogenic activity (p < 0.05). Conversely, mean trabecular separation (Tb.Sp) was significantly lower in the test group than that in the control group. 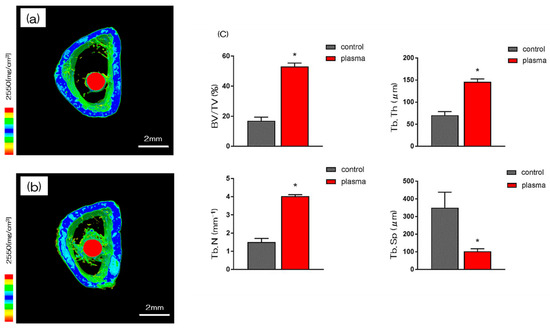 Figure 5. The reconstructed three-dimensional macro-CT images of rat femurs transverse slices showed that thin new bone layers are formed round the implants in the test and control group after 8 weeks. (a; control, b; test) In both (a) and (b), new bone formation was observed around the implant model, but in (b), more new bone formation was observed. (c) The BV / TV, Tb.N, and Tb.Th were significantly higher in the test group samples than that of the control group (* p<0.05). Conversely, Tb.Sp was significantly lower in the test group than that of the control group. 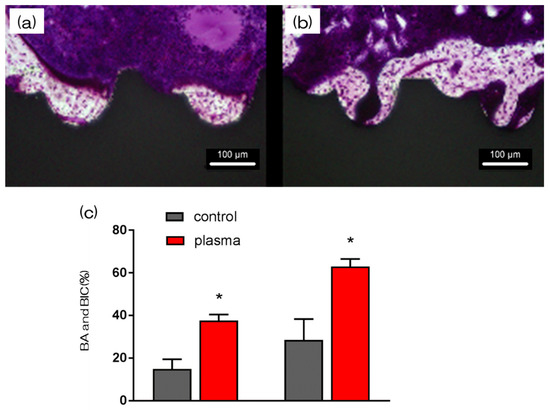 Figure 6. The histological sections showed that control implants still exhibited fibrous connective tissue from the bone-implant interface, whereas the test implants were almost entirely surrounded with new bone (a; control, b; test). The part indicated by the red arrow is the new-formed bone. In both (a) and (b), new bone formation was observed around the implant model, but in (b), more new bone formation was observed. (c) Furthermore, histomorphometric analysis showed that bone area ratio (BA) and bone-to-implant contact (BIC) were significantly higher around the test implants than around the control implants (* p<0.05). 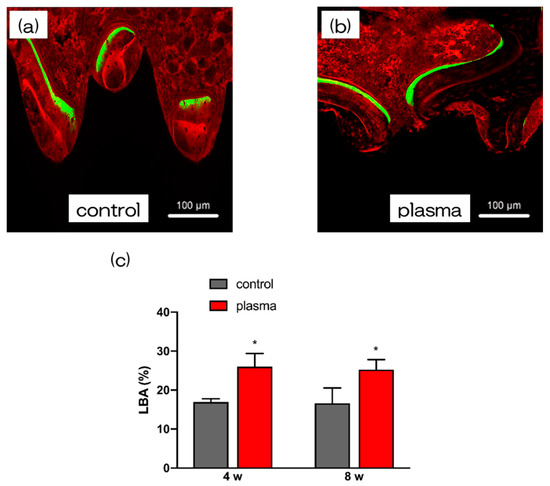 Figure 7. The sequential fluorescent labeling was also performed by scanning microscopy to analysis the process of bone formation. (c) The test implants showed increased fluorescent areas than control implants, indicating that alkali-plasma treatment might endow titanium with better bone deposition and remodeling at each time point. (* p<0.05). It is clear from (a) and (b) that the dyes of the two colors of 4w and 8w were dyed, although the dyes of three colors were used in this experiment. However, when both stained images were confirmed, it was clear that the amount of new bone formation in group b was high in (a) and (b).