Solid dispersions (SDs) are a technological strategy to improve the pharmacological potential of natural or synthetic bioactive molecules, due to the increase in its solubility and bioavailability, leading to a possible improvement of its biological activities. In this sense, the review sought to synthesize and critically examine the studies that address SDs with therapeutic applications, evaluated through in vitro and/or in vivo tests. This bibliographic survey shows the significant therapeutic potential of SDs in the context of the most diverse biological activities. Among these, including in vitro and/or in vivo antitumor, antiparasitic, antimicrobial, antioxidant, anti-inflammatory or cytoprotective activities, while additional activities, such as gastroprotective, hepatoprotective, antidiabetic or antinociceptive, were highlighted by in vivo studies.

Although SDs have already been studied and cited in the literature, the number of studies published with a focus on in vitro and in vivo trials is still relatively small, considering the great potential of these formulations in pharmaceutical technology and with the most diverse applications. The results of biological activity studies showed that SDs, as a drug release tool, is not a limiting factor for the execution of in vitro and in vivo tests. Additionally, it stands out as a promising system in which the active principle and the carrier interact, allowing, in most cases, an increase in the pharmacological potential due to changes in the physicochemical properties of the constituents. Thus, SDs can represent a safe and effective alternative for the development and improvement of drugs directed to a wide range of pharmacological treatments.

The slow dissolution rate and low solubility of some drugs lead to unpredictable bioavailability, non-reproducible clinical response or treatment inefficiency due to low therapeutic plasma levels; therefore, their use must be optimized using formulation strategies capable of improving their administration [5].

Several technological strategies have been developed and employed to circumvent this situation such as complexation with cyclodextrins, particle size reduction by micronization, crystal development, nanotechnology [5], salt formation and solid dispersions (SDs) [6][7]. However, some of these strategies have shown disadvantages including the development of active forms in vivo, high execution cost and considerable levels of toxicity. Some of these limits can be overcome by employing solid dispersions, a viable, well-established and widely-used strategy to increase the dissolution rate and solubility of poorly water-soluble drugs [4][6][7].

SDs can be defined as molecular mixtures of drugs that are not soluble in hydrophilic carriers, which exhibit a drug release profile driven by the polymer properties [8]. The so-called first-generation crystalline SDs, which use crystalline carriers such as urea and sugars including sucrose, dextrose and galactose, have the disadvantage of high thermodynamic stability that prevents a quick release of drugs [9]. In second-generation SDs drugs are dispersed in usually polymeric amorphous carriers [8], while the carriers used in third-generation SDs are surfactants or a mixture of amorphous polymers and surfactants [10].

The use of hydrophilic polymeric matrices to develop SDs for the release of commercial drugs or new drugs candidates has been shown to be a promising alternative able to improve their pharmacokinetic properties [7].

This review deals with SDs, mainly those belonging to the second-generation class that use polymers as carriers. It describes the main in vitro and in vivo activities (Figure 1) of SDs having different compositions and various preparation methods, intending to innovate and enhance the release of poorly water-soluble drugs, as well as improving the biological activities of the loaded bioactive compounds. 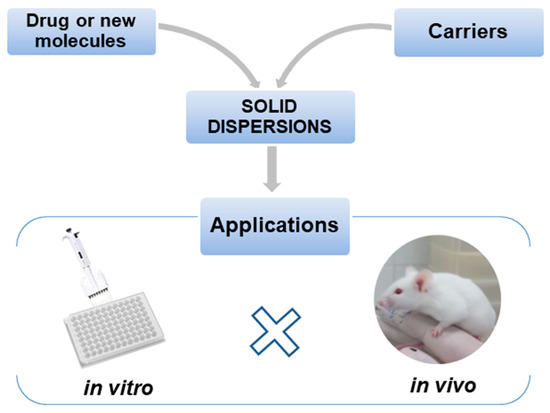 Figure 1. Representation of the application of solid dispersions in biological assays.

2. In Vitro Study of Solid Dispersions in Polymeric Matrices

This section deals with solid dispersions (SDs) prepared to improve the properties and release of poorly soluble drugs and drug candidates of natural or synthetic origin. The preparation and use of SDs have been reported in several in vitro studies, which have been numerically quantified and classified in Figure 2, based on the biological activities of their active compounds, while the main information on these studies is summarized in Table 1.

Figure 2. Quantification and classification of in vitro studies on solid dispersions published in the period from 2009 to 2020.

3. In Vivo Studies of Solid Dispersions in Polymeric Matrices

As already mentioned, solid dispersions (SDs) have been used as a strategy in pharmaceutical technology to circumvent some limitations presented by drugs and new bioactive compounds such as low solubility and bioavailability. In this sense, this section addresses in vivo studies on SDs with different biological activities, as shown in Figura 3 and quantitatively expressed in Figure 4 . The main information about these studies is summarized in Table 2. 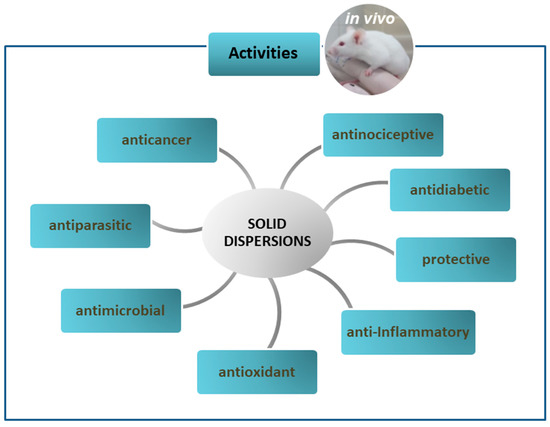 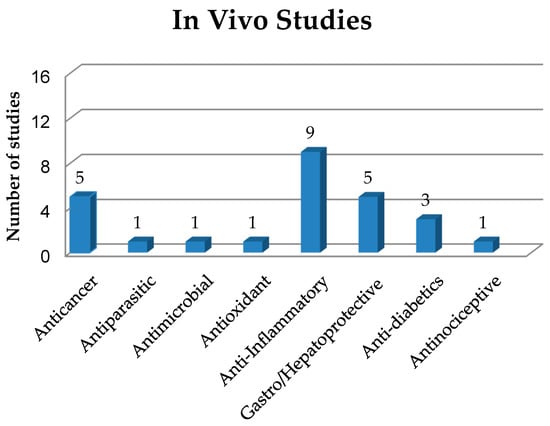 Figure 4. Quantification and classification of in vivo studies on solid dispersions published in the period from 2009 to 2020.

Solid dispersions are a technological strategy to improve the pharmacological potential of natural or synthetic bioactive molecules, thanks to an increase in their solubility and bioavailability, thus leading to possible enhancement of their biological activities. In this context, this review sought to summarize and critically examine studies conducted with this approach both in vitro and in vivo, which have provided evidence of a significant therapeutic potential that solid dispersions could offer in the context of the most diverse biological activities.

As poorly water-soluble active ingredients incorporated in solid dispersions exhibited improved physicochemical and pharmacological properties, these systems can be targeted in the pharmaceutical industry as possible therapeutic alternatives for certain diseases, with greater selectivity, safety and efficacy than the existing treatments.