A power hardware-in-the-loop (PHIL) based method for fast active power regulation (FAPR) compliance testing of the wind turbine converter controls. The presented PHIL setup is a generic test setup for the testing of all kinds of control strategies of the grid-connected power electronic converters.

Fast active power regulation (FAPR) is a control action applied to power electronic converters used to interface renewable generation, storage, or responsive demand. It involves a continuous measurement of grid frequency and/or active power deviation within very small-time frames, followed by a given action of a given controller scheme to regulate the injection/absorption of instantaneous active power to mitigate the frequency deviation caused by an imbalance. FAPR considers technical limitations or boundaries determining the capability of the controller to provide a fast frequency response.

Figure 1 illustrates the time frame of different frequency control tasks. The time frame of operation of FAPR may ideally be concurrent with the typical time frame of the generator’s response of inertial (e.g., 500 ms from the disturbance of active power). According to[1], the period highlighted with dark orange corresponds to the action of inertial response, as a consequence of a variation of the electromagnetic coupling between synchronous generators of an interconnected power system, due to a perturbation of the system’s active power balance. According to[2], FAPR can support the primary frequency response in Zone A, as shown in Figure 1.

The controller gains kp and kd values are selected by the sensitivity analysis. Figure 3 shows the frequency dynamics for the various values of the controller gains Kp and Kd of the combined droop- and derivative-based FAPR controller. It can be observed that at Kp = 0.73 and Kd = 0.68, the dynamic is oscillatory. For the power system under study, the value of Kp = 0.9 and Kd = 0.4 has been selected.

Figure 3. Selection of controllers gains kp and kd for the system under study.

The power system considered under this study is a modified IEEE (Institute of Electrical and Electronics Engineers) 9-bus system, which is used to test the controllers with the topology depicted in Figure 4. The conventional IEEE 9-bus system is altered by adding two wind power plants which contribute 52% of the power share. It is noteworthy that the wind turbine models used here are full scale not aggregate models. Table 1 describes the load flow results of the modified IEEE 9 bus system that is given in Table 1. Moreover, it is worth mentioning that the total generation and load balance has been maintained as the same as a standard IEEE bus system. The penetration of renewables has not been increased just by increasing the active power from the wind turbines but rather replacing synchronous generators. At each generation and load bus, the integrity of voltage and active power balance has been maintained similar to the standard IEEE 9 bus system.

The combined droop- and derivative-based FAPR control strategy has been tested on the PHIL test setup under the following conditions: (a) Device under test is connected at bus 7 (Figure 4), (b) the power system is a modified IEEE 9 bus system that has a 52% penetration of type-IV wind power generation, as given in Figure 4, (c) a 5% sudden increase in the load at bus 8 (Figure 4) and (d) FAPR controller is active for 10 s. The steps adopted for the testing of FAPR through PHIL are as follows. 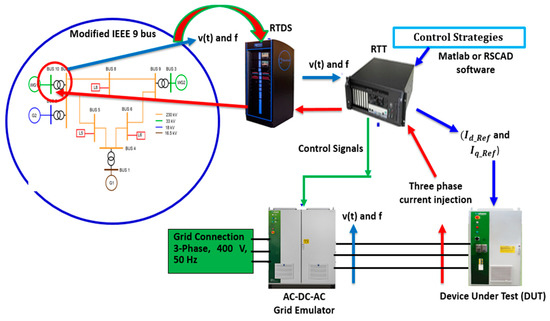 From Figure 6 and Figure 7, the dynamics of the active power injection by the combined droop- and derivative-based FAPR control method and its counter effect on the frequency can be seen. In addition, the active power injection and frequency curves are complying with the compliance criteria for FAPR. The frequency NADIR and RoCoF are within the defined limit. NADIR is improved from 49.64 to 49.82 Hz. While ROCOF is improved from 0.28 Hz/s to 0.04 Hz/s. The gain of the controller is tuned (K = 1 pu) to inject 10% of the rated power. It is injecting 10% of the rated power. After a few seconds, the power injection decreases due to a decrease in the requirement of power and improvement in the frequency. The rise time of active power is 510 ms, which is within the specified limit. The FAPR controller is active for 10 s. The frequency insensitivity band of ±30 mHz has been considered. The power system is stable and the implemented FAPR has not contributed negatively to the damping of power oscillations of the electrical system.

Figure 7. Dynamics of frequency due to the FAPR controller.