The tumour microenvironment (TME) contains cells of different origin, including cancer, immune, endothelial, and stromal cells. In the last decades extracellular vesicles (EV) released by these cells have gained attention as drivers of the TME diversity and tumour behaviour. In the TME, EV can switch tumour growth, immune-escape and metastatic spread or exert anti-tumour activity depending on their cell of origin and cargo. Moreover, since potentially detectable in different biological fluids, EV have been proposed as diagnostic and therapeutic, or “theragnostic” tools. Specifically, EV cargo has been considered a tumour “fingerprint”, and differentially expressed proteins and genetic materials proposed as potential targets for anti-cancer based therapies. Approaches using engineered EV or EV as naturally delivery system for “therapeutics” have been explored in preclinical models and their effectiveness, in targeting the TME, proven in primary and metastatic tumours. More recently, CAR-T cells and CAR EV combo platform have been proposed to improve the CAR-based anti-cancer approach. Likewise, their potential application for immune cell targeting has provide significant insights to move towards anti-cancer immunotherapeutic approaches. On these bases, a number of clinical trials aimed to deeply explore EV clinical application as anti-tumour based approach or “theragnostics” are on-going. Should validated as diagnostic/prognostic/anti-cancer tools the still open questions would be hopefully addressed and their clinical application would become the on-coming challenge against cancer. However, to move towards EV clinical application several hurdles including potency tests, scalability and full characterization in agreement with the regulatory agency should be solved.

Extracellular vesicles (EV) include 100–5000 nm vesicles released by almost all cell types. Exosomes are a subclass of extracellular vesicles ranging from 40 to 150 nm derived from multivesicular bodies, and are distinct for their biogenesis from ectosomes and pre-apoptotic vesicles, as the latter originate from the budding of the cell plasma membrane [1]. Since the definition of these membrane vesicles is evolving, in the present review, they will be referred to as EV. EV are highly heterogeneous and likely reflect the physiological/pathological conditions of the cell from which they originated. EV are composed of a lipid bilayer and serve as carriers of information through the release of lipids, proteins, RNA, and DNA into target cells[2].

EV activate signalling pathways in cells they fuse or interact with by transferring specific genetic and non-genetic components [3][4]. EV are detected in the tumour microenvironment (TME), and emerging evidence suggests that they play a role in facilitating tumourigenesis by regulating different processes, including tumour growth, angiogenesis, immunity, and metastasis formation. Circulating EV have also been exploited as liquid biopsies and recognized as biomarkers for early detection, diagnosis, treatment and response to treatment in cancer patients [5][6][7].

During the last two decades, several studies have explored EV function in tumour from different origins, however, so far, the precise EV role remains uncertain. In cancer, EV from different cells of origin have been largely described as tumour promoters, however, available data also suggest that EV retain anti-tumour properties and can also act to restrain disease progression [8].

The tumour microenvironment (TME) contains cancer cells, displaying different phenotypes and genetic features and a number of different cell types, including stromal cells, mesenchymal cells, endothelial cells (EC), and cancer associated fibroblasts (CAF)[9][10]. Diverse immune cell subtypes can also be found in the TME, which include dendritic cells (DC), B-lymphocytes, T-lymphocytes, natural killer (NK) cells, and macrophages [9][10]. All these cells shed EV, and contribute to TME diversity[11] (Figure 1). Moreover, since EV released within the TME likely contribute to the heterogeneity of circulating EV, they have also been considered to be a fingerprint of the tumour. 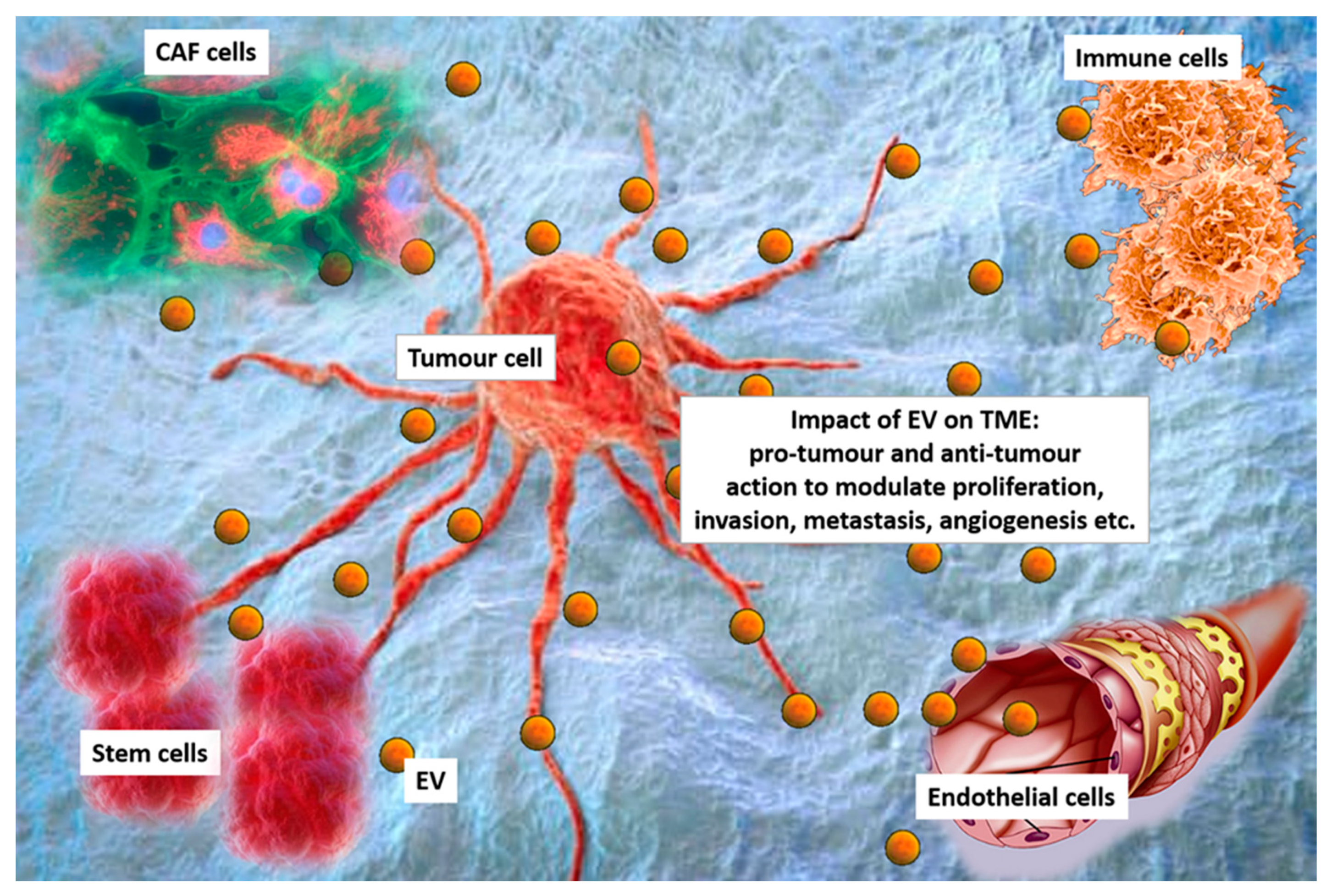 Recent studies have been focused on the chimeric antigen receptor (CAR)-engineered T-cell (CAR-T) approach for cancer immunotherapy [12][13][14]. CARs are monoclonal antibody-based recombinant receptors that provide both antigen-binding and T-cell-activating functions. Once expressed in T cells, CAR-T cells acquire potent antigen-targeted cytotoxic activity and act as “living drugs” [15]. CAR-T cell-based therapy involves the genetic modification of patient’s autologous T-cells to express specific CAR for tumour antigens, followed by their ex vivo expansion and re-infusion in patients. CARs are fusion proteins of a selected single-chain fragment variable from a specific monoclonal antibody and one or more T-cell receptor intracellular signalling domains [15]. Such T-cell genetic modification can be obtained via viral- or non-viral-based gene transfer, such as DNA-based transposons, CRISPR/Cas9 technology or electroporation-mediated mRNA transfer [16].

However, concerns related to their infusion in patients are emerging. The so-called cytokine release syndrome (CRS) is one of the most adverse event associated with CAR-T cell infusion [17]. EV have already been exploited for anti-cancer therapeutic approaches, hence, the combination of CAR-T and EV technology has been proposed [18][19]. CAR EV may have a low risk of toxicities and can be generated from healthy donors and applied as ‘off the shelf therapeutics’.

Unlike in lymphoid malignancies, in solid tumours, the CAR-T approach unveiled disappointing therapeutic effects [20]. Two core mechanisms mainly related to the intrinsic TME features account for the lack of CAR-T effectiveness in solid tumours. First, active tumour-mediated immunosuppression may limit the activity of CAR-T cells; second, functional changes in T lymphocytes after their ex vivo manipulation may reduce CAR-T cell diffusion through the ECM [21]. EV have the ability to cross biological barriers and the leaky vasculature of tumours prompts their trafficking into tumours when intravenously injected [22]. Once again, EV intrinsic properties may overcome CAR-T limitations, potentially allowing their application in solid tumours. Fu at al. demonstrated that CAR-containing EV express a high level of cytotoxic molecules and inhibit tumour growth. Moreover, compared to CAR-T cells, CAR EV do not express the programmed cell death protein 1 (PD1), and their anti-tumour effects cannot be weakened by recombinant PD-L1 treatment. In addition, in a preclinical in vivo model, CAR EV administration was found to be quite safe in preventing CRS compared to CAR-T therapy[19].

These data support the possibility that CAR EV may become an effective anti-cancer targeting approach overwhelming the limitations of current treatment modalities (Figure 2). Appropriately applying cellular and EV platforms, CAR-based treatment would be more effective and might be considered the next promising targeted-based option. Although a few CAR-T/EV combinatory studies are so far available, this challenging approach should be deeply investigated. 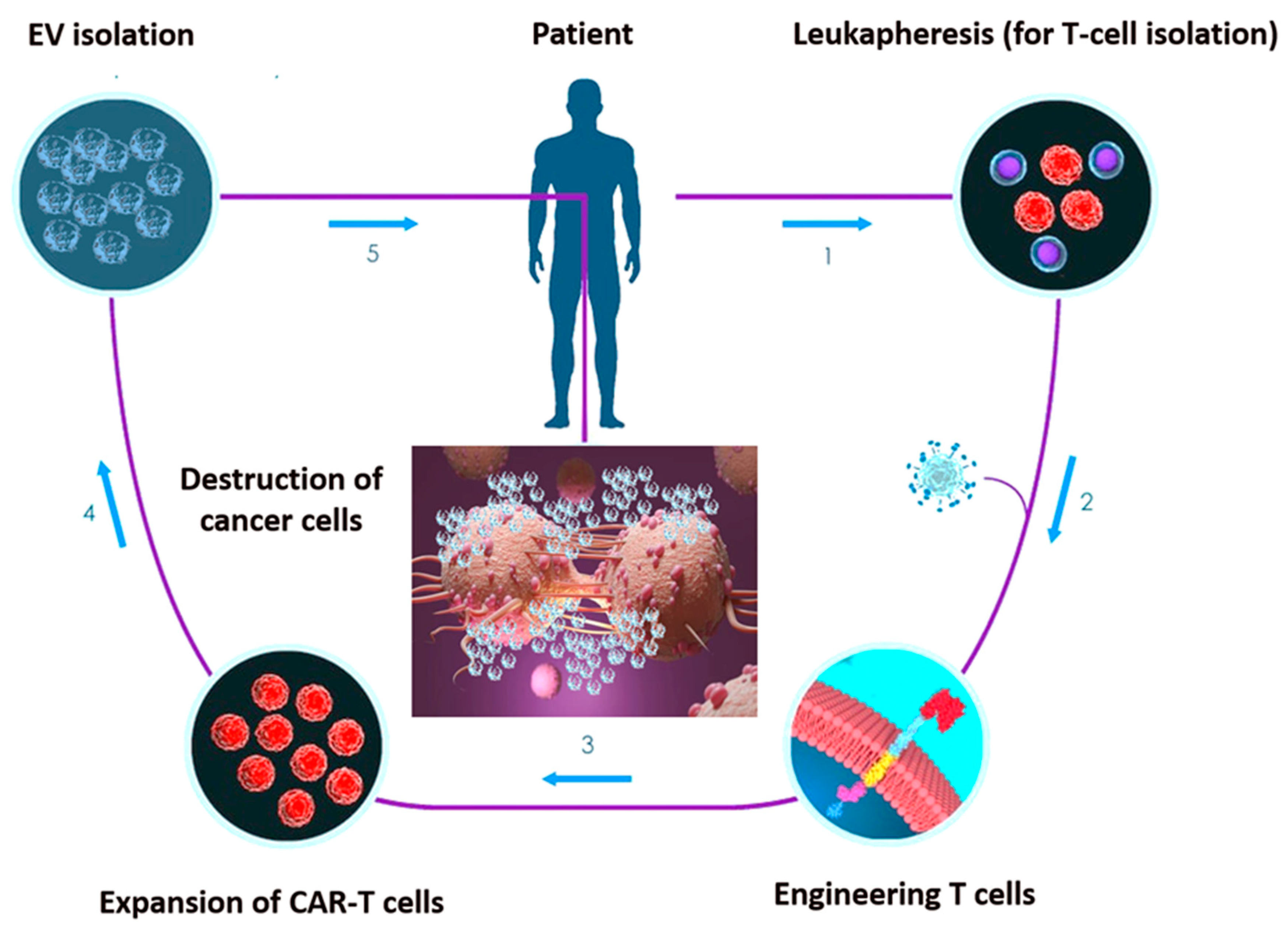 Innovative technologies have been developed in recent years, exploiting EV-miRNA-loading [23]. Since miRNAs can act as oncogenes or tumour suppressors, strategies based on their inhibition and/or replacement may represent the upcoming anti-cancer options (Figure 3). Indeed, miRNA administration was found to be effective in restoring their abnormal expression in cancers [24]. Therefore, miRNA engineered EV have been proposed as a useful approach to treat cancers and to conceivably reduce sides effects of current therapeutics [24]. Approaches that increase miRNA stability and prevent nuclease degradation are the most promising choices [25]. Currently, electroporation is the most used technique to incorporate miRNAs into EV. Although effective in destabilizing the membrane of vesicles and allowing miRNA entry, EV and miRNA aggregation is still an unsolved issue, applying electroporation [26]. 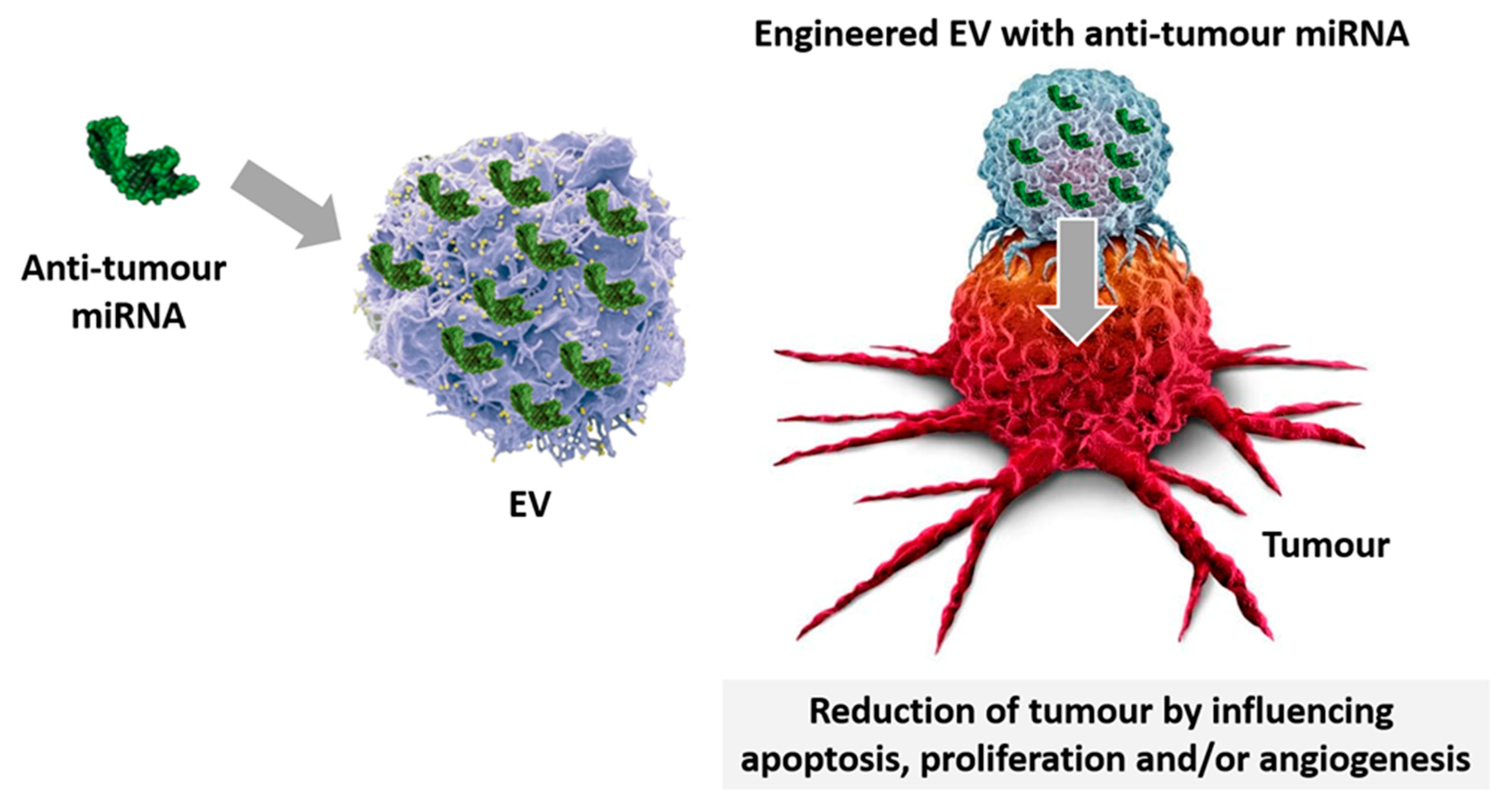