Bibliometric studies can also be applied to energy research topics, in particular, it is presented in this entry the analysis of the state of the art and publication trends on the topic of ISCC (Integrated Solar Combined Cycles) for the period covering 1990 to July 2020. The Web of Science (WOS) database was consulted, and 1277 publications from 3157 different authors and 1102 different institutions, distributed among 78 countries, were retrieved as the corpus of the study.

The analysis performed in this entry concluded that the main publication source for ISCC research was Energy Conversion and Management, in terms of the total number of publications (158), but Solar Energy had the highest number of citations on the ISCC topic (4438). It was also found that China was the most productive country in terms of ISCC publications (241), and the Chinese Academy of Sciences was the most productive institution (52). Nevertheless, the author with the most publications on ISCC was I. Dincer, from Ontario Tech University (24). Based on publication keywords, a series of recommendations for future developments in the ISCC topic were derived, as well as the ways in which those ideas are connected to the global state of solar energy research.

Human development indicators and societal developments are tightly bounded to extensive energy consumption [1]. However, the traditional energy scenario that still relies on thermal energy conversion of fossil fuels (coal, gas and oil) has shown a clear impact on global warming and climate change. A change in the energy generation paradigm is required if we want to meet society, users, and environmental demands. In that scenario, several agreements have been signed over the last few decades regarding climate protection and the reduction of greenhouse gases and pollutant emissions. Under that umbrella, non-dispatchable renewable energy sources such as wind and solar photovoltaics (PV) have grown in penetration what has led to new grid challenges and difficulties—such as curtailment, service disruptions or negative bid prices [2]. Despite the competitive cost of those technologies, they cannot meet users’ grid demands when they are not coupled to energy storage systems. Notwithstanding the latest advances and cost-reductions seen on electrochemical energy storage systems (batteries) for wind and PV plants [3], the storage of large amounts of electricity at a competitive price has not been solved yet.

A simpler alternative with a proven track of record for commercial applications gained attention a couple of decades ago. That technology is known as Concentrating Solar Power (CSP), which uses mirrors and optical devices to reflect and focus solar beams into a particular area where a device—a solar reactor or receiver, depending on the final application—is located[4]. Recently, great interest has been focused on CSP technologies based on cost–production reductions, with bidding projects such as Cerro Dominador at 11.4 c$/kWh (2014), or the DEWA project (under construction) with a bid of a 7.3 c$/kWh combined solar tower and parabolic trough plant in Dubai. However, new ideas and proposals are being placed for further cost reductions including hybrid concepts [5], coal-hybridization [6] or hybrid CSP/PV plants configurations [7]. Also under investigation are the use of advanced working fluids, such as supercritical steam [8] or supercritical CO2 [9][10][11]; the use of high temperature heat transfer fluids [12]; high temperature thermal energy storage systems (TES) [13] and high temperature receivers [14]; as well as the use of highly-efficient power cycles [15][16]. The latter is one of the main hot topics in thermal energy conversion technologies, and in CSP in particular. One of the proposals that have gained more attention recently, is the application of Combined Cycles for Concentrating Solar Power, also known as Integrated Solar Combined Cycle (ISCC). In order to better understand this proposal, a bibliometric approach is presented to discover currents trends and future of the technology.

Web of Science Core Collection was used to retrieve all indexed publications related to ISCC topic. A total number of 1277 publications were published on ISCC topic between 1990 and 2020 as it can be observed in the following figure (Figure 1). Figure 1. Evolution in the number of publications related to the ISCC topic.

Full record and cited references for each publication were downloaded and analysed using VOSviewer[17] software tool that is a free software for constructing and visualizing bibliometric networks, and it also offers a text mining functionality that can be used to construct and visualize the co-occurrence networks of the relevant terms extracted from a body of scientific literature. These networks may for instance include journals, researchers, or individual publications, and they can be constructed based on citations, bibliographic coupling, co-citations, or co-authorship relations. 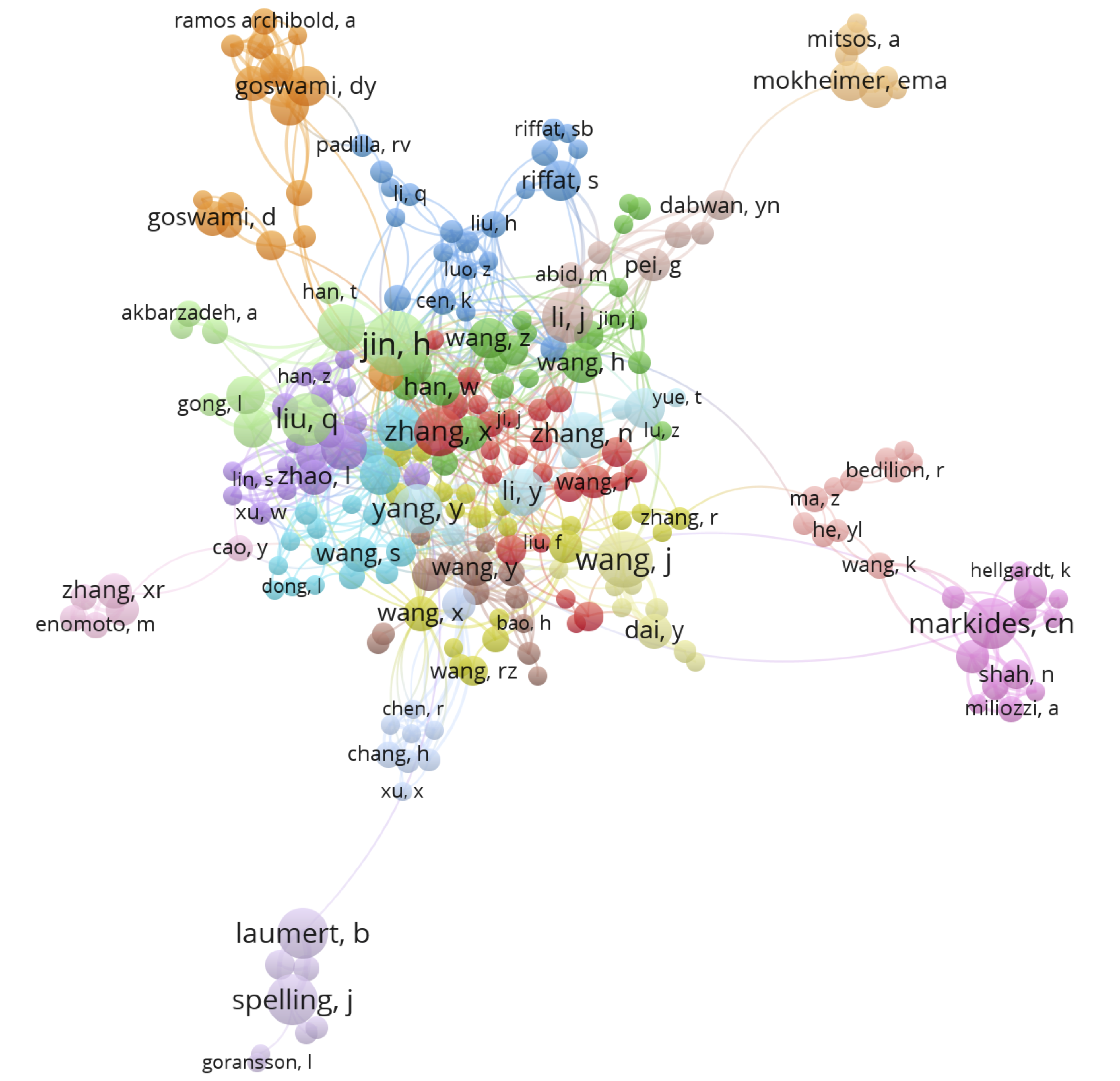 Figure 2. Co-authorship network for those authors who had published more than two ISCC papers.

Regarding the co-authorship analysis by organizations (authors’ institutions), there were 1102 different institutions that had published at least one paper on the ISCC topic. However, only 85 of them published at least 5 publications. Some of them were not connected in the network, since they did not cite any of the other groups. The largest set of connected items (69 nodes) was represented instead in the following figure (Figure 3). This kind of analysis is relevant because it allows scholars to identify the main institutions publishing on ISCC (nodes size) and linking relations (citations) among them.

Figure 3. Organization network for those groups which have published more than five ISCC papers.

A co-occurrence analysis was performed based on all of the keywords, with a full counting method. There were 4534 different keywords that appeared at least once in the data corpus (1277 total publications). This results in an average number of 3.55 keywords per publication. In order to consider only the more relevant keywords, a minimum number of occurrences was considered. In doing, so it can be concluded that 394 different keywords appeared in at least in five different papers, 71 appeared in at least 25 papers, and six keywords appeared in 100 publications from the corpus. For network graph representation, the 100 most common keywords were chosen as can be seen in the next figure. (Figure 4) 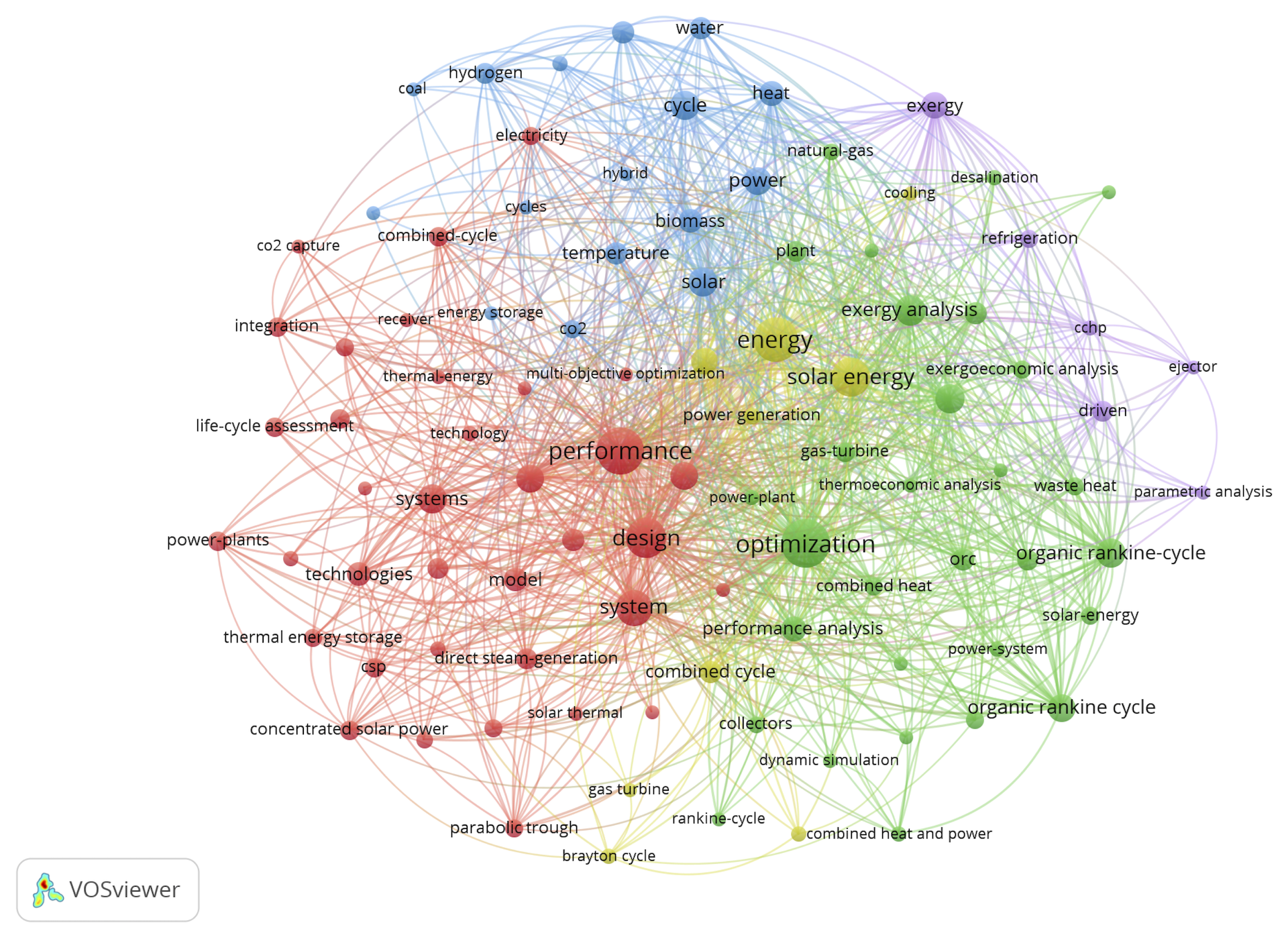 In recent years, the growing interest in higher conversion efficiencies for CSP applications has led to an increasing number of papers covering the topic of Integrated Solar Combined Cycle technologies. In particular, ISCC interest is based on its ability to increase the contribution of renewable energy sources into the global energy mix at a very high plant efficiency, whether in a pure solar configuration or in hybrid arrangements. Based on the presented bibliometric study, the following conclusions can be summarized: