Multiple myeloma (MM), characterized by malicious clonal explanation of plasma cells in the bone marrow with creation of monoclonal gammopathy, is the second most prevalent hematologic malignancy in adults. It accounts for approximately 13% of all hematologic malignancies and 1% of all cancers in the world, with a median age of onset of 69 years [1][2].

Multiple myeloma (MM), characterized by malicious clonal explanation of plasma cells in the bone marrow with creation of monoclonal gammopathy, is the second most prevalent hematologic malignancy in adults. It accounts for approximately 13% of all hematologic malignancies and 1% of all cancers in the world, with a median age of onset of 69 years [1][2]. In addition to plasmacytosis in the marrow and monoclonal protein in serum and/or urine samples, active myeloma is defined by the presence of at least one of the CRAB criteria: Hypercalcemia (calcium >11 mg/dL), renal function insufficiency (creatinine >2 mg/dL), anemia (hemoglobin <10 mg/dL), and bone lesions (1 or more skeletal lesions on survey).

Myeloma bone diseases (MBDs) are characterized by lytic lesions caused by an imbalance of bone remodeling due to an increase in bone resorption and a decrease in bone formation. Myeloma cells interfere with bone remodeling by stimulating osteoclast (OC) function and inhibit osteoblast (OB) differentiation, which results in osteolytic bone lesions of myeloma patient [3][4]. Bone lesions occur in up to 80% of active disease, and complete repair of bone lesions rarely occurs. These lesions are comprised of osteolytic lesions and/or diffuse osteopenia, even in patients without active disease [2][5][6]. In myeloma, bone disease mainly affects the axial skeleton, including the vertebrae (33%), ribs (15%), sternum (13%), and other long bones [7]. It leads to serious complications and/or skeletal-related events (SREs), which include fracture, compression of the spinal cord, hypercalcemia, and the need for further surgical treatment or radiation therapy. SREs not only decrease the quality of life as a result of pain, emotional distress, and treatment procedures, but also affect the survival of MM patients [6][8][9][10]. Therefore, knowledge of myeloma bone lesions for further disease management is warranted.

The interaction among MM cells, OC, and OB relies on many cytokines/proteins from myeloma cells or osteocytes, which promote OC differentiation via the receptor activator of NF-kappa B ligand (RANKL), chemokine C-C motif 3 (CCL3), interleukin (IL)-1,6, and osteoprotegerin (OPG) [11][12][13]. On the other hand, myeloma cells also respond to Wnt signaling pathway inhibitors, like dickkopf-1 (DDK-1) and sclerostin, which inhibit OB function [14]. With the imbalance of bone remodeling due to decreased OB function and increased OC function, MM creates a vicious cycle of tumor expansion and bone destruction.

Current management of MBD such as bisphosphonates (BPs) and denosumab reduce further bone destruction by OCs. Thus, they are therapeutic effects are limited due to the inability to actively stimulate bone formation. Therefore, research into the mechanisms involving in the dysregulation of bone remodeling in MM is essential. Nuclear factor erythroid 2-related factor 2 (NRF2) is a key transcription factor regulates the expression of cytoprotective genes against oxidative and chemical insults. In addition, NRF2 also modulates inflammation responses in several cell types. Recently, NRF2 has been shown to be associated with the malignant phenotype of many cancer cells, including myeloma cells. Interestingly, it also contributes to bone remodeling in disease status.

2. The Role of NRF2 in the Myeloma Microenvironment

MM is the result of neoplastic transformation from a terminally differentiated B lymphocyte. As such, it primarily exists and proliferates in the bone marrow similar to other normal plasma cells [15][16][17]. The interaction of plasma cells with the surrounding bone marrow environment functionally and physically is important for the proliferation and survival of plasma cells [18]. Two compartments in the bone marrow microenvironment interact with plasma cells, which promote proliferation, survival, and even drug-resistance of myeloma cells [15][16][17]. One is the cellular part comprising hematopoietic cells and non-hematopoietic cells, such as fibroblasts, OBs, mesenchymal stem cells, myeloid-derived suppressor cells (MDSCs), and BMSCs. Soluble factors, such as cytokines, chemokines, growth factors, and extracellular matrix proteins, comprise the non-cellular part that also interact with myeloma cells.

For the soluble factors, IL-6 is one of the most critical factors for myeloma cell survival, proliferation, and drug resistance [19][20]. In the marrow milieu, many cells including MDSCs, fibroblasts, macrophages, adipocytes, and dendritic cells, secrete IL-6. IL-6 has been shown to increase RANKL protein expression in murine osteoblasts and BMSCs, and been considered as a bone resorption cytokine [21]. Elevated IL-6 can be attributed to the activation of NF-κB signaling in many cell types [22]. Suppression of NRF2 and activation of NF-κB were observed in pathological conditions, such as inflammation [23]. NRF2 competes with NF-κB for downstream signaling, such as with co-activator CBP/p300, and the activated NRF2-suppressed NF-κB signaling [24]. Therefore, the expression of NRF2 is associated with a decrease in IL-6 expression in several cell types [25]. In NRF2-deficient mice, macrophages and embryonic fibroblasts showed higher expression of NF-κB and production of inflammatory cytokines IL-6 [26][27].

Additionally, vascular cell adhesion molecule-1 (VCAM-1) is also a target of NF-κB. As such, the suppression of NF-κB signaling in BMSCs results in decreased expression of ICAM-1 and VCAM-1, which affects the resistance of MM to proteasome inhibitors [28][29]. Likewise, activation of NRF2 could suppress the adhesion molecules expression in BMSCs by acting as an antagonist of the NF-κB pathway [29]. Activation of NRF2 by curcumin and dimethyl fumarate inhibits the expression of NF-κB and adhesion molecules in animal models [30]. These findings suggested that NRF2, through inhibiting the transcription activity of NF-κB, could suppress both the soluble factor (e.g., IL-6)-mediated drug resistance and cell-adhesion-mediated drug resistance. [31][32]. Given the critical role of IL-6 plays in RANKL expression, the effect of NRF2 on RANKL expression/secretion in the bone marrow microenvironment is worth pursuing. (Figure 1)

Osteolytic bone lesions are one of the central features of MM, which leads to morbidity of patients. MBDs are caused by many factors from myeloma cells and the microenvironment that stimulate OCs to resorb bone and inhibit OB activity to increase bone mass. The dysfunction of the OC/OB axis in myeloma patients results in osteolytic lesions and/or osteoporosis, leading to bone pain, fracture, diminished bone survival, and reduced quality of life in patients. Many signaling pathways and factors were noted to be associated with MBDs. The role of the RANKL/OPG pathway was found to participate in MBD, and the identification of the RANKL/OPG pathway also led to the development of RANKL inhibitors for myeloma bone lesion therapy.

NRF2, a master regulator of cellular defense system, has been considered as a target for chemoprevention and for cancer therapy. Here, we proposed that NRF2 can also be a therapeutic target for treating MBD. The balance of OCs and OBs is impaired in osteolytic bone lesions, where OB activity is suppressed while the osteoclastogenesis is strongly upregulated. Activation of NRF2 holds the potential for reversing the unbalance of OCs and OBs, since NRF2 could promotes osteoblastogenesis, while restrain uncontrolled osteoclastogenesis (Figure 2). Thus NRF2 activators should prove to be beneficial for MM patients with osteolytic lesions. However, NRF2 activation could have the opposite effect in BM environment cells and in MM cells. Thus, the effect of NRF2 activators on the growth and drug resistance of MM cells should be carefully noted. Nonetheless, the fact that cancer cells can activate NRF2 through several mechanisms including somatic mutations in Keap1 or NRF2 gene loci, hypermethylation at the promoter region of Keap1, transcriptional upregulation of the NRF2 gene through oncogene-dependent signaling, interruption of Keap1-NRF2 interaction, and the modification of Keap1 protein by electrophilic oncometabolites, may provide a possible resolution for this contradiction, in which cancer cells could lose their sensitivity to NRF2 activators [33][34]. In line with this notion, we have found that cells which expressed higher basal NRF2 protein level also have a weaker response to NRF2 activators. Therefore, it is worthy of further investigation for the effects of NRF2 activators on MBD in models with proteasome inhibitor-resistant MM cells or NRF2 hyperactivated MM cells. Owing to the elusive and complex nature of MM, more research is warranted to further investigate the specific role of NRF2 in myeloma bone lesions and to identify novel agents for NRF2 therapy. Nevertheless, for future clinical practice, we would propose that a test to profile the status of NRF2 signaling and/or the mutation in NRF2 signaling genes in MM cells collected from patient could be helpful to identify eligible population for NRF2 activator therapy for MBD. Furthermore, it is also possible that different classes of NRF2 activator should be used to treat MBD that were induced by MM cells with different NRF2 activation mechanisms. 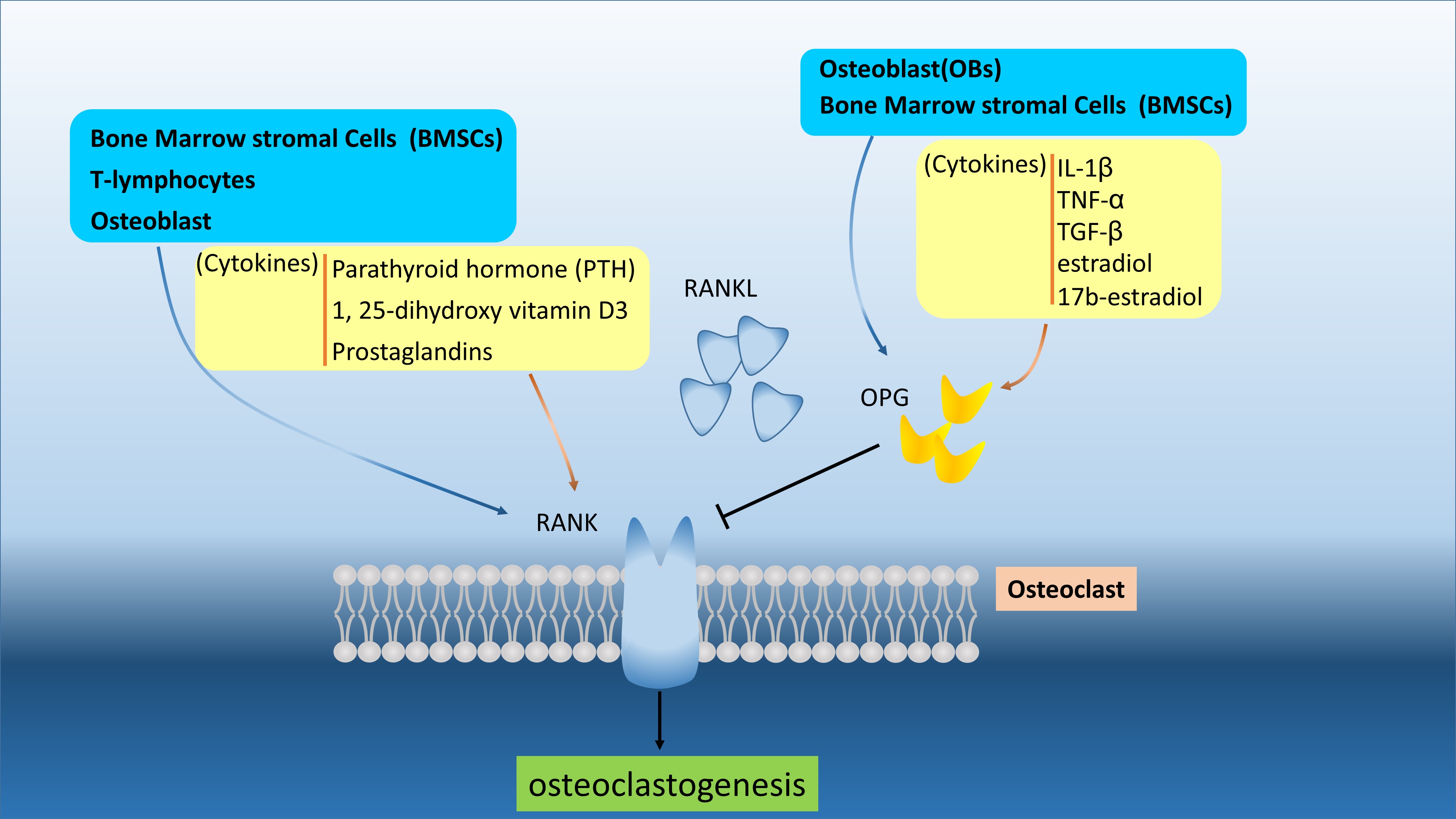 Figure 1. The RANKL/OPG/RANK are secreted and regulated by various cells and different cytokines. The RANKL and OPG can be produced by BMSCs and OBs to interact or compete RNAK in osteoclast and osteoblast. The OPG can regulated by cytokines, like IL-1β, TNF-α, TGF-β, estradiol, and 17b-estradiol. Figure 2. The role of NRF2 in mitochondrial regulation of bone homeostasis in MBD. The balance of OCs and OBs is impaired in osteolytic bone lesions, where OB activity is suppressed while the osteoclastogenesis is strongly upregulated. Activation of NRF2 could promote osteoblastogenesis, while restraining uncontrolled osteoclastogenesis. Red arrows indicate active effect; Blue bar arrow indicates suppressive effect.