The present investigation expands the knowledge on the immunogenic and tolerogenic potential of the chemotherapy drugs commonly used in the therapy of AML such as Daunorubicin, Cytarabine, Fludrabine and Etoposide . Among these, important differences have been observed, indicating that, particularly in an era when immunotherapy is being included in the clinical stage of AML treatment, the immunological perspective of chemotherapy should be taken into consideration in therapy decision-making.

Recent evidence indicated that, under certain circumstances, chemotherapy stimulates the immune system. Indeed, in the last decade, some chemotherapeutic agents used for acute myeloid leukemia (AML) treatment, such as anthracyclines, have been shown to induce a type of cell death that can promote modifications in cancer cells, which activate the immune system against leukemia cells [1][2][3][4]. In particular, the treatment of AML cells with daunorubicin (DNR), but not cytarabine (Ara-C), results in the maturation of dendritic cells (DCs) and in the efficient cross-priming of anti-leukemia T cells [1][3][4][5][6][7]. This process, immunogenic cell death (ICD), is characterized by the coordinated emission of danger-associated molecular patterns (DAMPs), including the translocation of the endoplasmic reticulum (ER) chaperones such as calreticulin (CRT) and heat shock proteins (HSPs) 70 and 90 on the cell surface, the active secretion of adenosine triphosphate (ATP), the release of high mobility group box 1 (HMGB1) from the nucleus in the extracellular milieu [8][9][10][11][12] and, finally, the release of immunostimulatory cytokines, such as type I interferons [13][14]. In the early phase, CRT translocates from the ER to the outer leaflet of the plasma membrane, thus initiating the apoptotic caspase-dependent process [11][12]. Simultaneously, HSP70 and HSP90 bind tumor-associated antigens (TAAs), thus stimulating DC maturation [7][15]. During the late post-apoptotic phase, pro-inflammatory factor HMGB1—which binds the toll like receptor 4 (TLR4) on DCs—is released from the nucleus in the extracellular space [16]. Finally, autophagy-dependent active secretion of ATP—which binds purinergic receptors present on DCs—promotes the recruitment, survival and differentiation of DCs [17][18].

When emitted in the correct spatiotemporal context [12], these DAMPs recruit DCs in the proximity of ICD and activate them to engulf TAA processing and present them to CD4 and CD8 T cells, thus resulting in the priming of a robust, antigen-specific immune response [19][20].

Although the scenario of AML is rapidly evolving and new targeted drugs are entering the clinical stage [23][24][25], the therapy of AML is at present principally based on the use of cytotoxic and cytostatic drugs, such as anthracyclines [26][27][28] and Ara-C [27][29][30]. Nevertheless, in induction chemotherapy, the conventional treatment regimen is able to induce complete remission (CR) in up to 70% of adult patients [31][32]. However, the probability of relapse remains elevated, particularly in elderly or prognostically “high risk” patients, unless transplantation of autologous or allogeneic hematopoietic stem cells is performed as a post-CR consolidation strategy [33].

3. Only Treatment with DNR and Eto, but Not Flu and Ara-C, Induced Translocation of CRT and HSPs from ER to Plasma Cell Membrane in AML Cells

As shown in Figure 3, flow cytometry data regarding CRT translocation were also confirmed using immunofluorescence. Taken together, these in vitro data indicate that Eto is comparable to DNR in early ICD event induction. In contrast, Flu treatment is not capable of inducing either CRT or HSP translocation, similarly to Ara-C treatment. 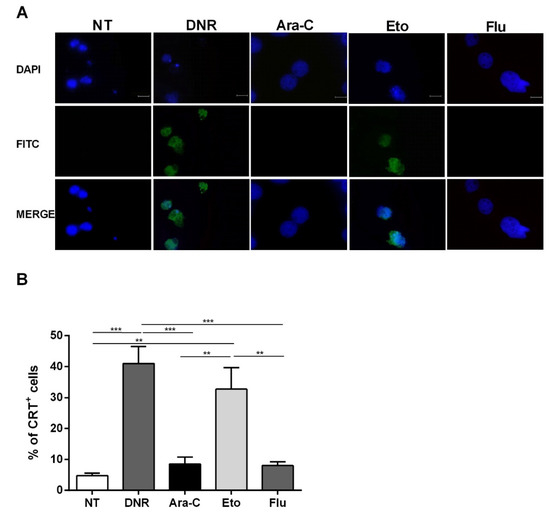 Figure 3. Immunofluorescence analysis of calreticulin (CRT) translocation on the cell-surface of HL-60 cell lines after chemotherapy treatment. The HL-60 cells were treated or not (no treatment; NT) with daunorubicin (DNR) (500 ng/mL), cytarabine (Ara-C) (20 µg/mL), etoposide (Eto) (20 µg/mL) and fludarabine (Flu) (70 µg/mL) for 24 h. (A) The localization of CRT (FITC-conjugated) at cell membrane level with respect to the nucleus (DAPI-conjugated) was evaluated by immunofluorescence microscopy. One representative experiment for each drug is reported. Bar 20 µm. (B) Quantitative analysis of CRT+ cells by immunofluorescence. A total of 100 cells were used for the quantification. ** p < 0.01; *** p < 0.001.

4. Only Treatment with DNR and Eto, but Not Flu and Ara-C, Induced the HMGB1 Release from the Nucleus to the Extracellular Space of AML Cells

After cellular stress, during the late post-apoptotic phase, pro-inflammatory nuclear factor HMGB1 translocates to the cytosol and is consequently released to the extracellular space [12]. After binding to specific receptors on DCs, HMGB1 induces the full maturation of DCs as evaluated by the up-regulation of CD40, CD54, CD80, CD83 and MHC II. To test this event, the HL-60 cells were treated with DNR (500 ng/mL), Ara-C (20 µg/mL), Eto (20 µg/mL) or Flu (70 µg/mL) for 24 h, then fixed, permeabilized, stained and analyzed for HMGB1 expression by immunofluorescence microscopy. As shown in Figure 4A, the extracellular release of HMGB1 was well-documented after DNR and Eto, but not after Ara-C and Flu, similarly to what was observed for CRT and HSP induction. These results were also confirmed when the HMGB1 expression density between un-treated and treated cells was evaluated (Figure 4B). 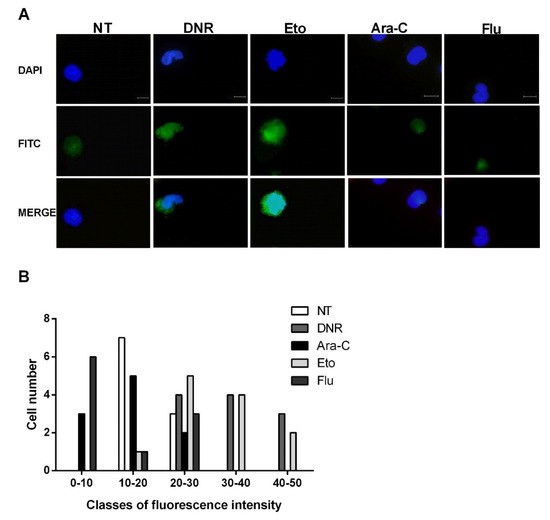 Figure 4. Immunofluorescence analysis of non-histone chromatin-binding protein high mobility group box 1 (HMGB1) release from the nucleus of HL-60 cell lines after chemotherapy treatment. The HL-60 cells were treated or not (no treatment; NT) with daunorubicin (DNR) (500 ng/mL), cytarabine (Ara-C) (20 µg/mL), etoposide (Eto) (20 µg/mL) and fludarabine (Flu) (70 µg/mL) for 24 h. (A) The release of HMGB1 (FITC-conjugated) from nucleus (DAPI-conjugated) to cytoplasm and then extracellular space was visualized by immunofluorescence microscopy. One representative experiment for each drug is reported. Bar 20 µm. (B) Quantitative analysis of HMGB1 fluorescence intensity outside the nucleus in un-treated and treated HL-60 cells. A representative field was used for quantification. The signal outside the nucleus was measured by densitometry (n = 21; randomly selected cells). The cells are grouped in classes of fluorescence intensity and plotted relative to HMGB1 expression.

Collectively, in line with early ICD-related events, the immunofluorescence evaluation confirmed the presence of HMGB1 in the extracellular milieu after DNR (as expected) and Eto treatment, but not after Flu and Ara-C.