PbS (lead sulfide) colloidal quantum dots consist of crystallites with diameters in the nanometer range with organic molecules on their surfaces, partly with additional metal complexes as ligands. These surface molecules are responsible for solubility and prevent aggregation, but the interface between semiconductor quantum dots and ligands also influences the electronic structure. PbS quantum dots are especially interesting for optoelectronic applications and spectroscopic techniques, including photoluminescence, photodiodes and solar cells.

Usually, material properties are defined by the atomic or molecular composition of a material tested at the macro scale. This rule no longer holds when structures become very small, in the range of nanometers, where scaling effects lead to significantly different optical [1][2][3], chemical [4][5][6], magnetic [7][8][9] or other properties of nanoparticles or quantum dots. An interesting method to combine the bottom-up assembly of devices from nanoparticles with the mechanical flexibility of the device is now accessible, with the use of relatively simple chemical procedures based on colloidal semiconductor quantum dots [10]. A general reason for semiconducting quantum dots research and development is that they are universal technologically tunable systems, with adjustable energy levels for lighting and sensing applications.

The core of colloidal semiconductor quantum dots often consists of nanocrystals from some hundred to a thousand atoms of II-VI, III-V or IV-VI semiconductors [11]. On their surface, they bear organic molecules or metal complexes as ligands, as visible in Figure 1 [12]. 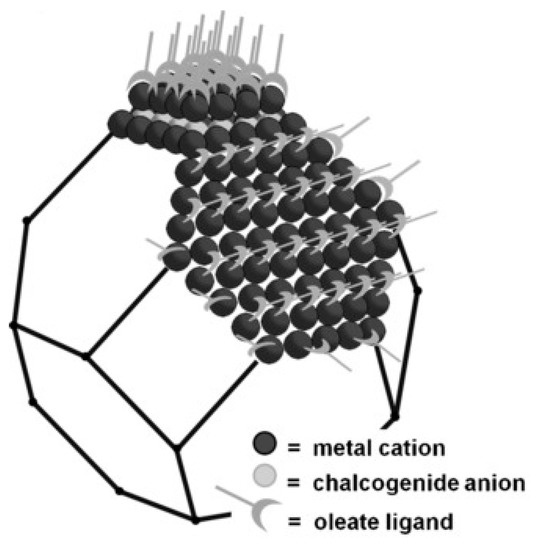 These ligands build the surface layer between the semiconductor quantum dot and the outside, in this way both influencing and being influenced by an inner and an outer interface. The inorganic/organic surface between quantum dots and ligands thus impacts the electronic structure of the quantum dot [13], as well as interactions with neighboring quantum dots [14].

A highly interesting material to produce such quantum dots is PbS. This IV-VI semiconductor typically has a sodium chloride crystal structure [15] and a temperature-dependent direct band gap between approx. 0.29 eV and 0.45 eV, making it useful for detecting infrared and visible light [16]. Besides macroscopic crystals and epitaxial thin films, PbS is often prepared in the form of nanocrystallites or quantum dots by diverse methods, from chemical routes [17] to electrodeposition [18] and microorganism-based synthesis [19]. One of the main areas of research and development in which PbS nanocrystallites—typically as colloidal PbS quantum dots—are used is photovoltaic applications. Similar to PbSe, PbS has high photosensitivity in the near-infrared spectrum [20], and allows for the tuning of the optical band gap to a broad range of around 0.7–2.1 eV [21][22], as well as the electronic structure of the quantum dot films and significantly shifting the band edges without large modifications of the band gap [23][24]. PbS colloidal quantum dots also show multiple exciton generation [25][26]. All these properties make PbS quantum dot solar cells belong to the quantum dot solar cells with the highest performance [27][28][29], and thus making PbS a highly interesting material for solar cells.

With regards to solar cells, the most commercially important technology is based on silicon. There are, however, other technologies, such as those based on perovskites [30], which typically use an active layer from a perovskite material, i.e., a material with the crystal structure ABX3, with A denoting a monovalent cation, B a metal cation and X a halide anion [31]. This active layer is usually embedded between two electrodes, one of which has to be transparent to allow photons to reach the active layer, a hole transport layer on the one side and a hole-blocking layer on the opposite side, in this way defining the orientation of the current flow.

Finally, dye-sensitized solar cells (DSSCs) are of growing interest. While the efficiencies reachable by them are still low, especially when using non-toxic and low-cost materials [33][34][35], they can be expected to be highly useful in large-scale applications where overall efficiency is less important than the cost-benefit ratio [36]. As the aforementioned types of solar cells, DSSCs contain two conductive electrodes surrounding the other layers. Usually, a semiconductor like TiO2 or ZnO is applied on the top electrode and dyed with a natural dye, or a more efficient—usually toxic—one. A catalyst is applied on the counter electrode, supporting electrons from an external circuit reaching the active layers of the DSSC. Between a dyed semiconductor and catalyst, an electrolyte fills the gap, usually based on iodine/triiodide or similar redox couples [37].

One recent idea to increase Schottky quantum dot solar cells' (QDSCs) power conversion efficiency is to combine a p-type PbS quantum dot layer with an n-type metal oxide layer for the front junction [41], or to use inverted Schottky QDSCs with a low-work-function, abstaining from metal oxides [42]. Mai et al. investigated different interfacial electrolytes to fit the electrolyte chemistry to the cell performance [43]. They capped PbS quantum dots (QDs) with oleic acid [42], and passivated them afterwards with Cl-. The transparent conductive oxide (TCO) front electrode's work function was lowered by spin-coating the TCO electrode with a few nanometers of polyethylenimine (PEI) or poly [(9,9-bis(3′-(N,N-dimethylamino)propyl)-2,7-fluorene)-alt-2,7-(9,9–dioctylfluorene)] (PFN), respectively. After adding layers of PbS quantum dots, and MoOx and Au/Ag as a back electrode, the cell was finished. For the different polymer electrolytes used to reduce the work function, the electrical characteristics of the inverted Schottky QDSC changed clearly. In this way, it was possible to reach an efficiency of 4.5% in an oxide-free QDSC [43].

Light harvesting properties of metal oxides like TiO2 or ZnO, which are typically applied as semiconducting layers in DSSCs, can be enhanced by decorating them with low bandgap metal sulfides. One of the techniques used for this purpose is the so-called pseudo-successive ionic layer absorption and reaction (p-SILAR). Ali et al. described in their most recent study how PbS and CdS quantum dots were deposited on TiO2 nanoparticles, performing a H2S treatment of the TiO2 nanoparticles in a rotary reactor. Using rhodamine B degradation as a measure, they showed the positive influence of the H2S treatment for the p-SILAR process [44].

As this excerpt of some of the most recent, highly interesting and promising research on PbS quantum dots for solar cells shows, this material offers a broad bandwidth of applications, from light harvesting to electron transport, and correspondingly a large amount of possible solar cell types in which it can be utilized—in particular, the possibility to tailor the semiconductor band gap by changing quantum dot dimensions or ligands makes PbS an interesting material for solar cells with diverse material combinations. On the other hand, controlling quantum dot and ligand properties is necessary to gain sufficient power conversion efficiencies if this material is used in the solar cells of different types.