The distribution of microorganisms in the atmospheric circulation affects the animals that inhabit the area. Also, many organisms that share the environment also influence the distribution of environmental bacteria. In this paper, we focused on microbes that survive on the surface of Asian Dust, and clarified their topographical features and distribution. The characteristics of microorganisms that are easily influenced by environmental factors, and their effects on the atmospheric circulation are considered as issues of the One Health Concept.

Transboundary infectious diseases are currently increasingly problematic, as they originate from viruses and bacteria which can threaten human and animal health. They occur not only through the development of socio-economic activities but also via the atmospheric circulation from climate change [1]. Dust events especially have long been considered a negative factor in transboundary mass transfer [2][3][4]. No detailed search has been done for the distribution of viable bacteria on the surface of the dust-producing areas. In order to understand the problems associated with this outbreak risk, a basic analysis of the outbreak site is essential. The Asian dust event is an event where a large amount of dust is blown by strong winds due to the occurrence of low pressure in arid/semi-arid areas such as the desert region of East Asia and the Loess Plateau. This dust is then carried by a westerly wind and floats in northeast Asia as well as the western Pacific Ocean. This is followed by scattering, descent, and deposition[5]. The conditions for the generation of Asian dust are (1) a large amount of dry sand dust (0.1–0.3 mm in diameter) and dust (0.25–0.0036 mm in diameter) present in the area of occurrence; (2) the presence of an updraft due to low pressure at the site of occurrence; (3) the presence of a strong westerly wind above the site of occurrence[6][7][8]. In spring, dust storms occur in the Gobi Desert in China and Mongolia, as well as in the Hebei Corridor and the Loess Plateau region[9][10]. Dust storms are a meteorological phenomenon in which a large amount of mineral dust blown up by a strong wind from the desert area is carried by the wind in the sky and floats while descending. They not only significantly reduce visibility near the surface of the earth, but also cause significant damage to human activities such as agricultural production and transportation, as well as to human health by affecting respiratory organs[11][12]. The factors responsible for dust storms are meteorological conditions (strong winds, low pressures, and updrafts) that presuppose occurrence, and the ground surface conditions (soil moisture content, snowfall, and vegetation) that exist under those conditions.

The particle size of the yellow sand that arrives in Japan is 1–30 μm in diameter, including PM2.5 (particles with a diameter of 2.5 μm or less). The size of most of the dust particles flying to Japan was reported to be about 4 μm in diameter (Ministry of the Environment yellow sand chemical component analysis data, 2002)[12][16][17]. Yellow sand arriving in Japan is of low concentration but made up of fine particles, and its arrival time overlaps with the pollen release from cedar and cypress trees. As the incidence of respiratory conditions such as bronchial asthma in children is increased in connection with this phenomenon, concerns regarding the effects of allergies on human health become highlighted, raising public anxiety. In addition, infectious microorganisms may attach themselves to dust particles and be transported over long distances, consequently highlighting the role of the latter as a cross-border pollutant[18]. It has been reported that bacteria in the Gobi area attach to soil particles and disperse due to the dust phenomenon[19]. Previous findings have indicated that various yellow sand bioaerosols containing pathogenic microorganisms become scattered, and that spores resistant to ultraviolet rays and drought in particular have been found to survive in the air[20][21].

Bioaerosol is airborne particulate matter derived from living organisms, including microorganisms such as bacteria, viruses, pollen, and organic dust[22]. Bacteria may roll up with sand dust due to the dust storm phenomenon, attach to the dust particles, and be transported over long distances. The presence of Bacillus sp. has also been confirmed over the Taklamakan Desert, which is a dust-producing area, as well as over Dunhuang City, China and Suzu City, Japan (100–800 m in altitude)[23]. Of health concern are particles less than 10 μm in size that can penetrate the lungs. Furthermore, particles smaller than 2.5 μm are capable of penetrating deep lung tissues, and these particles cause adverse health effects via oxidative stress[24]. Furthermore, the greatest risk factors for these components are frequency of exposure, particle concentration and composition, and immunological effects. In particular, it has been suggested that dust-borne microorganisms may have a direct impact on human health through etiology, exposure as an allergen, and increased susceptibility to asthma due to long-term exposure[25][26]. If environmental bacteria are zoonotic or risk factor for human health, they can directly affect livestock or humans or indirectly via animals. Although it exists in the environment, it has the potential to be versatile in its host range due to its susceptibility, and a One Health concept is required.

2.2. Characteristics of Detected Bacteria on the Land Environment

Bacillaceae are mostly found in the dry lake bed (DL), which is a source of dust, and are reported to be soil-derived, livestock pathogens and symbiotic bacteria, and bacteria causing food poisoning. B. thuringiensis isolated from the surface soil of dry lakes exists in various natural environments including soil, plant foliage, fresh water, seabed sediments, and wastewater treatment facilities. It has attracted attention as an entomopathogenic bacterium that can replace chemical pesticides[29]. B. muralis has been reported to be separated from soil[30]. 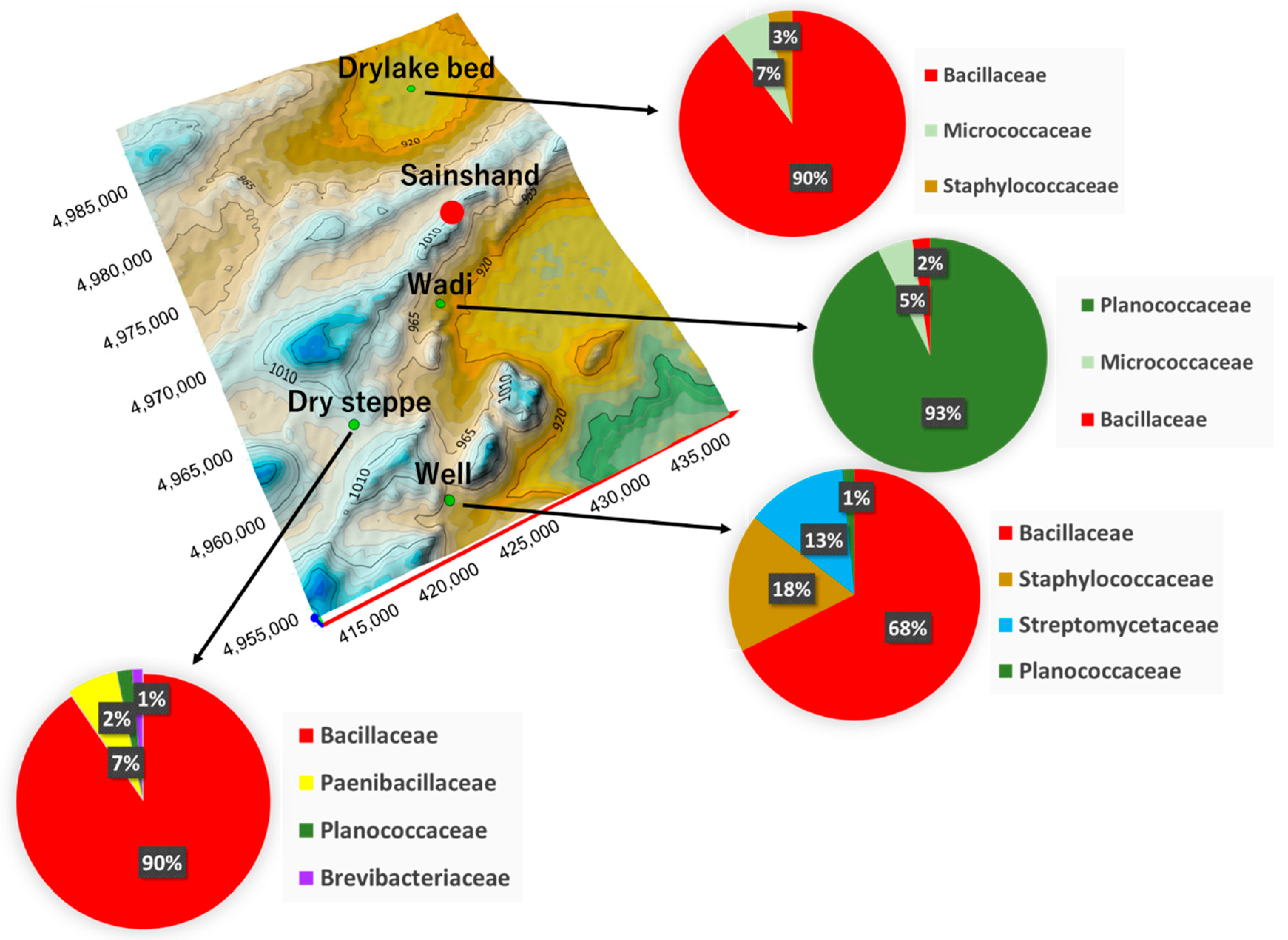 Figure 1. Geographical location of the study area.The sample site on the west side of the investigated dust source in Mongolia is shown on the map. The study site is a terrain with an elevation ranging from 1311 m to 692 m, with four sample points: Dry lake bed, Desert steppe, Wadi, and Well. (a) Map of Mongolia; (b) the topographic contours of study site (where, DEM data sources from SRTM (The Shuttle Radar Topography Mission, the spatial resolution is 1 arc-second for Global coverage download from ©USGS Earth Explorer. And authors make Topographic Contours (TC) file using Surfer, Golden Software®). Geographical representation based on the family of bacteria isolated from surface soil. The pie chart shows the ratio of each land type for the identified family of bacteria. Similar distributions of bacteria have been confirmed in the dry lake bed and desert steppe, and various bacteria are distributed in Well. Wadi isolates are characterised by a different distribution of Planococcaceae than isolates from the other sample points. The background image is 3D Topographic Contours using SRTM data.

Research on the industrial microbial application of B. subtilis, which is ubiquitously present in soil and plants, and also exists in the gastrointestinal tract of ruminants and humans, is progressing[31]. B. cereus is an aerobic, spore-forming bacterium abundantly found in natural environments such as soil and sewage, which causes food poisoning[32].

Bacillus sp. are a stress-resistant bacterial group with a high potential for long-distance transport and vertical mixing along with dust (Kosa)[34]. Considering the characteristics of Bacillus sp., it is easily understood why they exist throughout the surface soil of the Gobi region. These species typically float up in the air during a dust event and are transported over long distances along with Asian dust[34][35]. It is speculated that this bacterium may spread widely among the regions and may be dispersed. The phylogenetic tree analysis suggested that Bacillaceae are distributed in the environment with the movement of the atmosphere (e.g., during dust events).

Arthrobacter sp., from the Micrococcaceae family, are a major group of soil bacteria; various Actinomycetes have been isolated from the desert environment, and the bacteria exhibits a high growth temperature range (15–50 °C) [36]. Planococcaceae was found most frequently in the Wadi (WA) surface soil; similar results were obtained in Well (WE) and Desart step (DS). Bacterial species such as Micrococcaceae and Bacillaceae were also found in DL. The presence of multiple common bacterial species in WA may be related to topographical features, with factors such as precipitation believed to affect the environment in surrounding areas. It is speculated that bacterial migration may originate from WA.

The highest total number of bacteria among the four land uses was detected in WE, and included Staphylococcaceae Staphylococcus sp. These animal-derived bacterial species have been identified in wells, which provide drinking water, essential for life, to livestock and wild animals. This finding is very distinctive and may be related to environmental factors. The distribution of Streptomycetaceae Streptomyces sp. occurs in soils of India, Russia, Morocco, and Japan. The present study revealed that these bacteria also exist in the Gobi Desert. Many of the Actinomycetes belong to this group of bacterial species, and are naturally derived from soil and plants[37][38]. In addition, these bacteria are halophilic, resistant to environmental stress, and known to survive air movement [33].

The bacteria detected in DS were all environmentally derived. The most frequently detected Bacillaceae and Paenibacillaceae are present in various environments, including soil, water, rhizosphere, indoor plants, and insect larva. Brevibacteriaceae, detected only in this land type, are soil-derived bacteria. This area is characterized by the growth of plants, highlighting the need for the different bacteria to be isolated. The symbiotic environment of plants may be a factor in the difficult distribution of bacteria by dust events. Interestingly, bacteria detected in the surface soil of the Gobi study site were also found in Japanese dust. Considering that surface soil in the Gobi region is transported overseas every year as yellow sand, this phenomenon suggests that it may move together with the dust. It is therefore speculated that bacteria distributed in both areas are transferred via atmospheric circulation. Future research should include a focus on transboundary microbial migration.

3. Viable Bacteria in Dust-Generating  Area and its impact

Bacteria displayed land-use-dependent diversity, indicating the possibility of migration due to dust events, and that environmental bacteria may affect animals and humans. When environmental bacteria have zoonotic properties, they directly infect livestock or humans, or indirectly infect humans via animals. Although it exists in the environment, it has the potential to be versatile due to its sensitivity. In this study, seven dominant bacterial strains survived under environmental stress in the dust-producing area of the Gobi region. Their distribution was characterized by the environmental factors of the land, and they may be transported over long distances along with dust particles. Bacteria of animal origin were detected in the study areas which indicated the presence of animals. This suggested that a variety of bacterial species may be transported along with the generation of Asian dust, and scattered. From a global perspective, there is a possibility that malignant infectious disease pathogens will be scattered to other regions together with dust, and affect animals in these areas[3][4]. It has been confirmed at the DNA level that Bacillus anthracis can disperse via aerosols[39]. As a One Health concept, it will be possible to assess the risk of bacteria in the environment by comparing drug resistance gene markers in common bacteria present in the environment, animals and humans. Based on these reports, it is important to further the investigation of dust events under the One Health concept in order to balance the ecosystem as well as ensure the safety of human and animal health.