The anticancer effects of Andrographolide

Andrographolide, a diterpene lactone from Andrographis paniculata was brought into to the limelight because of its ability to inhibit cancer cell proliferation and induce apoptosis. Here we review andrographolide on cellular pathways regulation including Wnt/β-catenin, mTOR, VEGF-mediated intracellular signaling, as well as TRAIL-mediated apoptosis to inhibit cancer development.

Recent developments in functional genomics, proteomics and next-generation sequencing have revolutionized the fields of molecular and clinical oncology [1][2][3][4]. Scientific breakthroughs have helped researchers in dissecting the intertwined network of oncogenic signal transduction cascades [5][6][7][8][9]. The deregulation of spatio-temporally controlled cell signaling pathways plays fundamental role in enhancing the ability of cancer cells to survive under “drug pressure”, the induction of epithelial-to-mesenchymal transition (EMT), metastatic spread, invasion of distant organs, and loss of apoptosis [10][11].

Secondary metabolites from plants are a rich source of bioactive compounds and have clinical use against various diseases [12][13], e.g., the anticancer drugs podophyllotoxin, vinca alkaloids (vinblastine and vincristine), and camptothecin. Among these compounds, the terpenes constitute the largest class of natural products and are widely used in food and pharmaceutical industry [14]. A broad range of biological and pharmacological activities have been reported for compounds of this chemical class, such as anti-inflammatory [15] and antitumor [16][17] actions. Therefore, terpenes provide exciting avenues for the discovery of new drug candidates.

In fact, many members of terpene family have entered various phases of clinical trials and some of them have been incorporated into backbone of modern medicine, e.g., paclitaxel. This compound is a diterpene isolated from the bark of Taxus brevifolia Nutt. (Taxaceae) and produced on an industrial scale for clinical application. 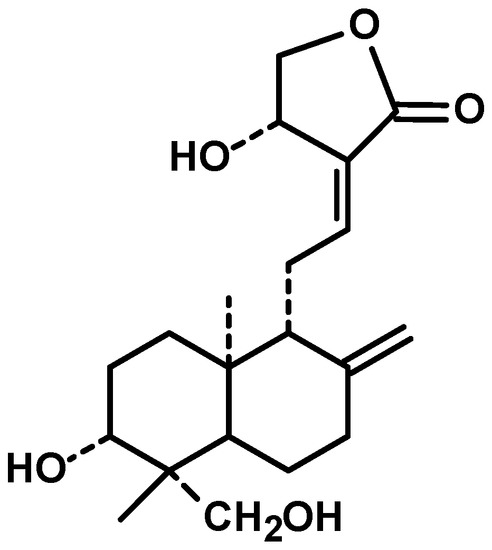 Because of the noteworthy pharmacological features of andrographolide and encouraging evidence obtained from preclinical studies, andrographolide has also been tested for efficacy individually and combinatorially with capecitabine for the treatment of colorectal cancer (NCT01993472). The entry of andrographolide in clinical trial straightforwardly advocated its good potential.

The tightly orchestrated and spatio-temporally controlled JAK/STAT (Janus Kinase/Signal Transducer and Activator of Transcription) has been shown to play instrumental role in different cellular processes (Figure 2). The deregulation of the JAK-STAT pathway was noted to be involved in cancer development. STAT proteins are phosphorylated and consequently move into the nucleus to transcriptionally upregulate target genes [21][22][23]. SOCS (suppressor of cytokine signaling) and PIAS (protein inhibitors of activated STATs) are negative regulators of STAT-driven signaling [24]. However, the ability of andrographolide to regulate PIAS and SOCS in different cancers is still unclear. The regulation of STAT proteins by andrographolide has been investigated in different diseases. Here, we review the ability of andrographolide to modulate STAT proteins in cancers. 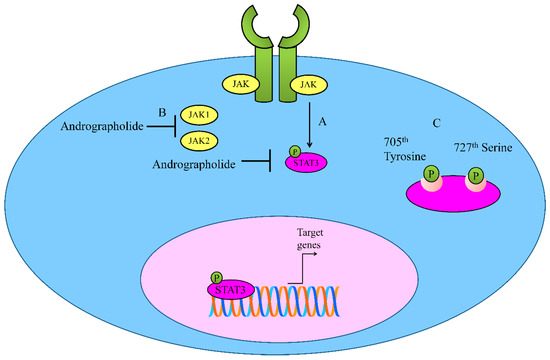 The development of STAT inhibitors is gradually gaining attention as an effective strategy to shut down target gene network controlled by STAT proteins. In accordance with this concept, OPB-31121 and OPB51602 had made entry into clinical trials and completed Phase I/II clinical trials for various cancers including, non-Hodgkin’s lymphoma, hepatocellular carcinoma (HCC), multiple myeloma and hematologic malignancies. Despite the fact that initial studies for OPB-31121 demonstrated efficacy against STAT3, but clinical trials in HCC showed minimal tumor inhibitory activity, poor pharmacokinetic features and toxicities associated with peripheral nervous system. Clinical trials for these inhibitors were terminated because of poor pharmacokinetic features and intolerability. Pyrimethamine, originally identified as an anti-malarial agent, is currently in phase I/II clinical trials for the treatment of small lymphocytic leukemia and chronic lymphocytic leukemia (https://clinicaltrials.gov/ct2/show/NCT01066663, accessed on 6 January 2020). Another stumbling block that needs to be overcome in context of STAT3 inhibitors is the relatively higher cytotoxic IC50 value, which limits further developments. In view of the existing challenges related to STAT inhibitors, it will be exciting to combine OPB-31121 or OPB-51602 with andrographolide in preclinical studies.

Since the initial discovery of the oncogenic functionality of WNT1 in mouse mammary glands, scientists have gained a better understanding of multifaceted roles of WNT signaling cascade in different cancers [28][29]. WNTs and their downstream effectors modulate various processes which are essential for cancer progression, including tumor growth and metastatic spread. Canonical Wnt signaling revolves around the stabilization and nuclear accumulation of the transcriptional co-activator β-catenin [30].

Another analogue, 3A.1 (19-tert-butyldiphenylsilyl-8, 17-epoxy andrographolide), significantly inhibited TCF/LEF promoter activity [32]. Expression levels of β-catenin and Wnt-stimulated target genes were markedly reduced. Furthermore, analogue 3A.1 substantially enhanced function of GSK-3β which promoted β-catenin degradation. The analogue 3A.1 mediated effect was impaired after treatment with GSK-3β inhibitors or upon the over-expression of mutant β-catenin in colon cancer cells [32].

CWP232291 is a peptidomimetic drug that targets β-catenin for degradation. It is currently being tested in combination with dexamethasone and lenalidomide in MM patients (NCT02426723), as monotherapeutic agent for patients with refractory or relapsed myeloid malignancies (NCT01398462) and combinatorially with cytarabine in relapsed and/or refractory acute myeloid leukemia patients (NCT03055286). It will be interesting to study tumor growth regression in xenografted mice inoculated with β-catenin-overexpressing cancer cells. Accordingly, peptidomimetics can be combined with andrographolide for analysis of synergistic effects.

Andrographolide decreased the levels of phosphorylated-mTOR (Ser2481), whereas total mTOR levels remained unchanged [39]. Levels of RAPTOR and RICTOR, members of mTORC1 and mTORC2, respectively, were also found to be downregulated by andrographolide [39].

Andrographolide may prevent tumorigenesis in mice by inhibition of inflammation [40]. Andrographolide-induced mitophagy was found to be significantly involved in inactivation of NLRP3 inflammasomes and amelioration of animal models for colitis and colitis-associated cancer. More importantly, andrographolide inhibited the PIK3CA-AKT1-mTOR- P70S6K pathway [40].

Treatment of hypoxic MDA-MB-231 cells with andrographolide resulted in reduced HIF-1α expression along with a decrease in phosphorylated levels of AKT, mTOR, and its downstream effector P70S6K [41]. However, phosphorylation of 4EBP1 was markedly enhanced, which controlled the initiation of protein translation under hypoxic conditions [42].

5. Regulation of NLRP3 Inflammasome by Andrographolide

The activation of NLRP3 inflammasome occurred through deubiquitination of NLRP3, whereas inhibition of deubiquitination inhibited activation of NLRP3  [43][44]. Additionally, ASC (Apoptosis-associated Speck-like Protein containing a CARD) was noted to be ubiquitinated linearly for NLRP3 inflammasome assembly. Structural studies showed that NLRP3 NBD oligomerized the NLRP3 PYD (PYRIN domain), which served as molecular scaffolds for nucleation of ASC proteins. ASC and NLRP3 interacted structurally through PYRIN domains  [43][44]. Consequently, ASC was converted into a prion-like structure and generated longer ASC filaments which were critical for the activation of inflammasomes. Pro-caspase-1 interacted with ASC through CARD (caspase recruitment domain) and formed its own prion-like filaments which branched off from the ASC filaments. Pro-caspase-1 was converted into molecularly functional caspase-1  [43][44].

Intracellular transduction of signals from the interaction of the family of vascular endothelial growth factors (VEGFs) and their receptors (VEGFRs) are central regulators of angiogenesis.

Molecular-docking module and biochemical analyses have shown that andrographolide acts as a highly efficient docking molecule that binds effectively to ATP-binding pocket of VEGFR2 and interferes with its kinase activity [45]. 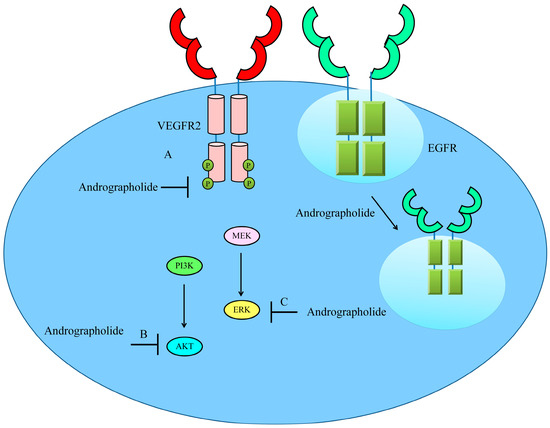 Semi-synthetic andrographolide analogue A5 has also been tested previously against Hep3B cancer cells [48]. A5 was noted to be highly effective against ERK1/2 (extracellular signal regulated kinase-1/2) and p38 MAPK. In addition, A5 significantly blocked VEGF-triggered activation of VEGFR2 [48].

Semaxinib (SU5416) has been tested for efficacy in patients with metastatic colorectal carcinoma but SU5416-containing regimens did not show survival benefits, which consequentially resulted in the cessation of further developments of this compound [49]. Likewise, Vatalanib (PTK787/ZK 222584) also did not show remarkable clinical efficacy [50]. Therefore, andrographolide might be a promising candidate for the inhibition of a wide range of VEGFRs in different cancers.

Basic and clinical scientists have paid much attention to the identification of molecules having maximum anticancer activity and minimum off-target effects. TRAIL (tumor necrosis factor-related apoptosis-inducing ligand) has surfaced as one of the highly efficient molecules reportedly involved in targeted killing of cancerous cells. TRAIL transduced the intracellular signals through death receptors (DR4 and DR5). Mechanistically, it has been shown that a decrease in cell surface expression of death receptors severely abrogated TRAIL mediated apoptosis [51].

Andrographolide significantly enhanced TRAIL-induced cleavage of FLIP-L and reduction of XIAP levels in HepG2 cells. Moreover, ectopic expression of either XIAP or FLIP-L severely impaired andrographolide-mediated TRAIL sensitizing effects [53]. Andrographolide considerably stimulated the expression of DR4. Excitingly, p53 was found to be essential for the DR4 upregulation. Results were further confirmed by analysis of expression levels of DR4 in andrographolide-treated p53 wild-type and mutant cancer cells. Findings clearly suggested that the andrographolide-mediated upregulation of DR4 was more pronounced in p53-wild type expressing cancer cells [53]. Mechanistically, it was shown that JNK-driven phosphorylation of p53 on 81st Threonine was noted to be critical for p53 stabilization and transcriptional regulation of target genes. ROS generation triggered activation of JNK which post-translationally modified p53 [53]. Collectively, these results demonstrated that andrographolide induced ROS generation, JNK activation, p53 stabilization, and consequent upregulation of DR4.

Although the theoretical dimension of a biological approach to select patients appears to be very attractive, the practical issues of accurate and reliable biomarker selection is challenging. Strategically, selection of patients can be based on sensitivity to TRAIL-based therapeutics and/or to select TRAIL-resistant biomarkers which have already been investigated or that may arise as a treatment response. GALNT14/fucosyltransferase 3/6 assay has previously been studied in phase II clinical trials as a useful and promising diagnostic tool for prediction of sensitivity to TRAIL receptor agonists, drozitumab and dulanermin [56][57]. A detailed investigation of restoration of apoptosis by andrographolide in TRAIL-resistant cancers will be helpful in improving the efficacy of TRAIL-based therapeutics.

Since the serendipitous discovery in nematodes, microRNAs (miRNAs) have emerged as highly acclaimed master regulators of cellular and molecular processes. miRNAs have been characterized into tumor suppressor miRNAs and oncogenic miRNAs. After the groundbreaking discovery of miRNAs and their central role in cancer development and progression, scientists have actively pursued the opportunities related to the inhibition of oncogenic miRNAs and overexpression or re-activation of tumor suppressor miRNAs [62][63].

The inhibition of oncogenic miRNAs has been studied contextually in different cancers. MDA-MB-231 cells were cultured on chick embryo chorioallantoic membrane to unveil how andrographolide exerted anti-angiogenic effects [64]. Andrographolide attenuated neovascularization in the tumor tissues in a dose-dependent manner. Tissue inhibitor of metalloproteinase (TIMP)-mediated inhibition of metalloproteinases controls a powerful pyramidal cascade inherent to tissue homeostases. TIMP3 is directly targeted by miR-21-5p. Andrographolide repressed miR-21-5p and stimulated the expression of TIMP3 [64]. Therefore, it seems clear that andrographolide interferes with angiogenesis mainly through the inhibition of miR-21-5p and upregulation of TIMP3.

Andrographolide mediated targeting of Notch, SHH/GLI, and TGF/SMAD have not been comprehensively explored. Successful development of Notch pathway-targeting agents will require a mechanistic knowledge of the functions of Notch signaling in specified cancers. Likewise, the regulation of TGF/SMAD signaling needs to be extensively explored because of tight connection between hyperactive TGF/SMAD signaling and EMT. Andrographolide repressed RANKL-induced NF-ҝB signaling and consequently inhibited cancer-induced bone loss in tumor bearing mice [68]. Emerging technologies, such as synthetic biology and genomics, have opened new horizons for the identification of medicinal properties of biologically active chemicals from natural sources. The identification of natural products which possess remarkable pharmacological properties may provide an alternative option for anti-cancer treatment.