Hepatocellular carcinoma (HCC) accounts for 85% of primary liver cancer, the third most common cause of cancer-related deaths worldwide. Its incidence has been increasing in both men and women. In Western countries, high-calorie diets, mainly rich in carbohydrates such as fructose, represent a significant concern due to their repercussions on the population's health. A high fructose diet is related to the development of Metabolic Associated Fatty Liver Disease (MAFLD), formerly named Non-Alcoholic Fatty Liver Disease (NAFLD), and the progression of HCC since it potentiates the lipogenic pathway and the accumulation of lipids. However, fructose metabolism seems to be different between the stages of the disease, carrying out a metabolic reprogramming to favor the proliferation, inflammation, and metastatic properties of cancer cells in HCC. This review focuses on a better understanding of fructose metabolism in both scenarios: MAFLD and HCC.

Primary liver cancer is among the most prevalent malignant diseases worldwide. It is the sixth most diagnosed cancer and the third leading cause of death worldwide in 2020 ( Figure 1 ). It is estimated 906,000 new cases and 83,000 deaths due to this malignancy, particularly hepatocellular carcinoma (HCC) [1]. 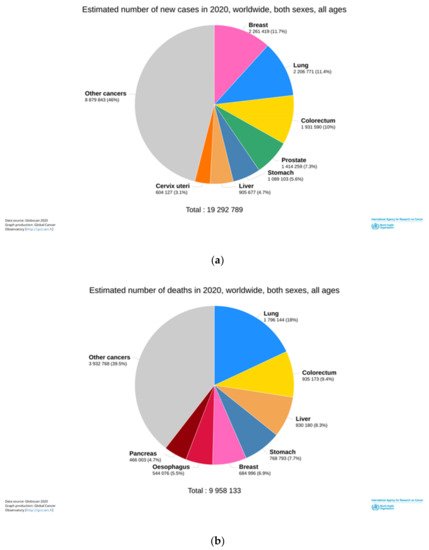 Figure 1. New cases and deaths estimated worldwide in both sexes and all ages related to cancer [1]. (a) Estimate number of new cases. (b) Estimate number of deaths. Data Source: GLOBOCAN 2020. Graph Production: International Agency for Research on Cancer (IARC) (https://gco.iarc.fr/today/home), World Health Organization. It was accessed on 19 June 2021.

HCC accounts for 75–85% of primary liver cancer. Its incidence has been increasing in both men and women. The high mortality rate is due to inefficient HCC diagnosis in the early stages of the disease, non-optimized treatments, and high aggressivity in these kinds of tumors [2].

One of the most critical risk factors for the development of HCC is the Metabolic-Associated Fatty Liver Disease (MAFLD), formerly named Non-Alcoholic Fatty Liver Disease (NAFLD) [3]. MAFLD represents the hepatic manifestation of a multisystem disorder, and the main difference between MAFLD and NAFLD is the presence of metabolic dysfunction, necessary for MAFLD diagnosis. It does not require excluding patients with alcohol consumption or another chronic liver disease [4]. MAFLD definition is considered more practical for identifying patients with fatty liver disease with a high risk of disease progression. Currently, it has been classified as the most common chronic liver disease in the last years, being one of the leading causes of liver transplantation [5].

The proposed criteria for a positive diagnosis of MAFLD is the evidence of hepatic steatosis in addition to one of the following three criteria: overweight/obesity, Type 2 Diabetes Mellitus (T2DM), or evidence of metabolic dysregulation [3]. The increment of these diseases is closely related to the diet. Indeed, the consumption of high-calorie foods, mainly lipids, and carbohydrates, has increased over the years.

Due to the current lifestyle, eating habits have changed, increasing the consumption of fat and sweets related to the increasing incidence of MAFLD, positioning it as the most common chronic liver disease in the last 30 years. The consumption of fructose also has been highly related to the obesity pandemic, T2DM, and risk of cardiometabolic diseases. Mice fed with high fat and fructose diets present insulin resistance, obesity, hypertriglyceridemia, liver steatosis, fibrosis, and HCC development [6][7].

On the initial progression of the disease, the Ketohexokinase C (KHK-C) is more relevant; thus, fructose metabolism is exacerbated in enterocytes and hepatocytes. In the small intestine, fructose-enriched diets induce the rupture of tight junctions between enterocytes allowing the translocation of LPS to the portal blood. Endotoxemia promotes inflammation and lipogenesis in the liver [8].

However, it seems that fructose has a dual role in MAFLD and cancer metabolism (Figure 2 and 3). Some studies have reported that in cancer cells, fructose metabolism is decreased compared to normal cells. Furthermore, some enzymes related to fructose catabolism have lower activity in HCC compared to normal liver tissue [9][10][11]. As a result of this metabolism, reprogramming that favors the Warburg effect has been reported [12]. The canonical Warburg effect is based on reducing mitochondrial oxidation of Pyruvate and the enhancement of glycolysis to obtain higher levels of Lactate and ATP. Lactate is involved in microenvironment reprogramming, angiogenesis, and invasion [13]. However, because the fructose metabolism generates higher ROS levels, it has been proposed that cancer cells under high fructose levels change their metabolism to a reverse Warburg effect [14]. Due to the fructose metabolism, metabolic rewiring enhances  proliferation, invasion and metastasis in cancer cells. There is evidence that a change to a lower fructose metabolism favors the invasion and metastatic progression in some types of cancer as breast cancer [15]. 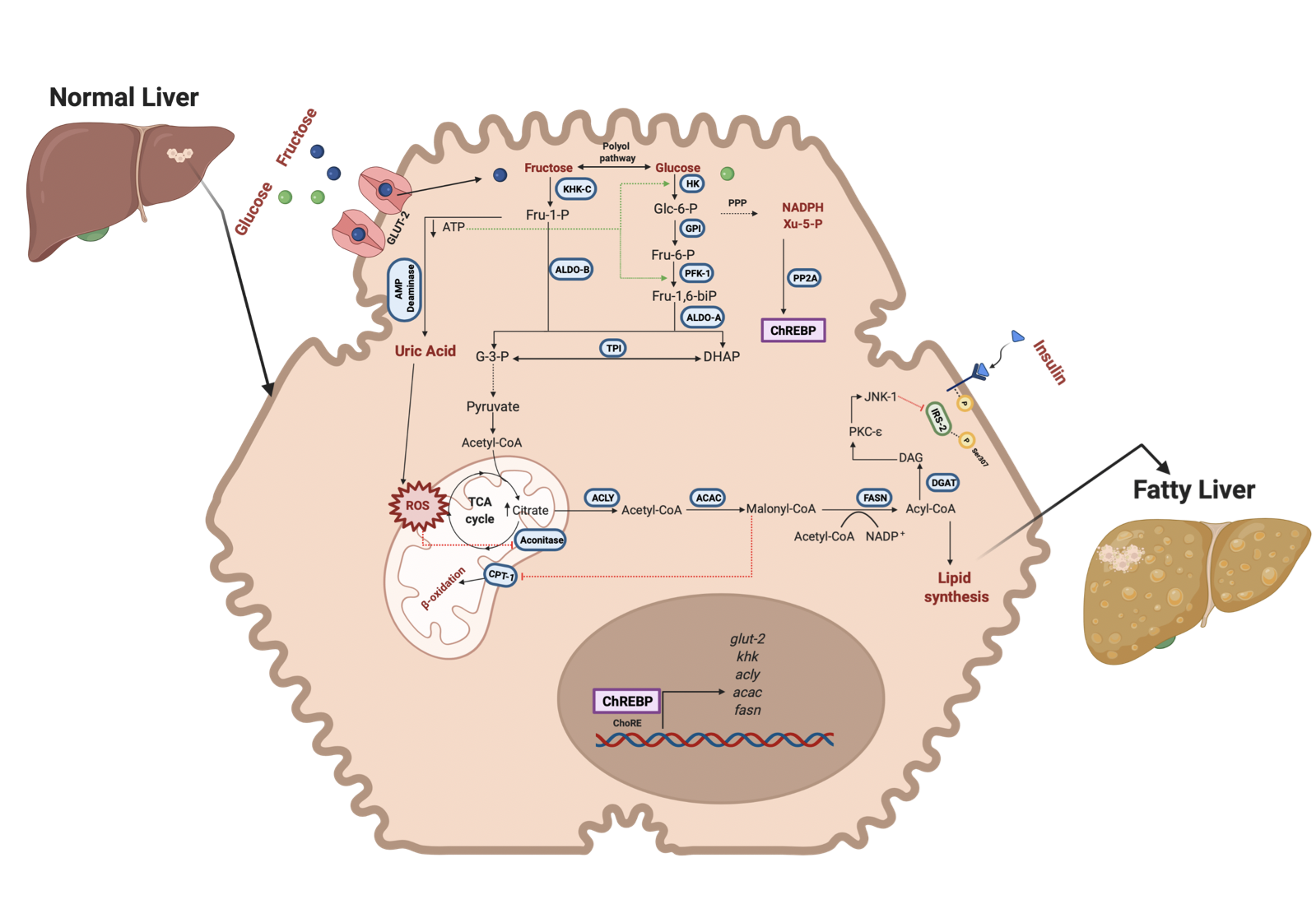 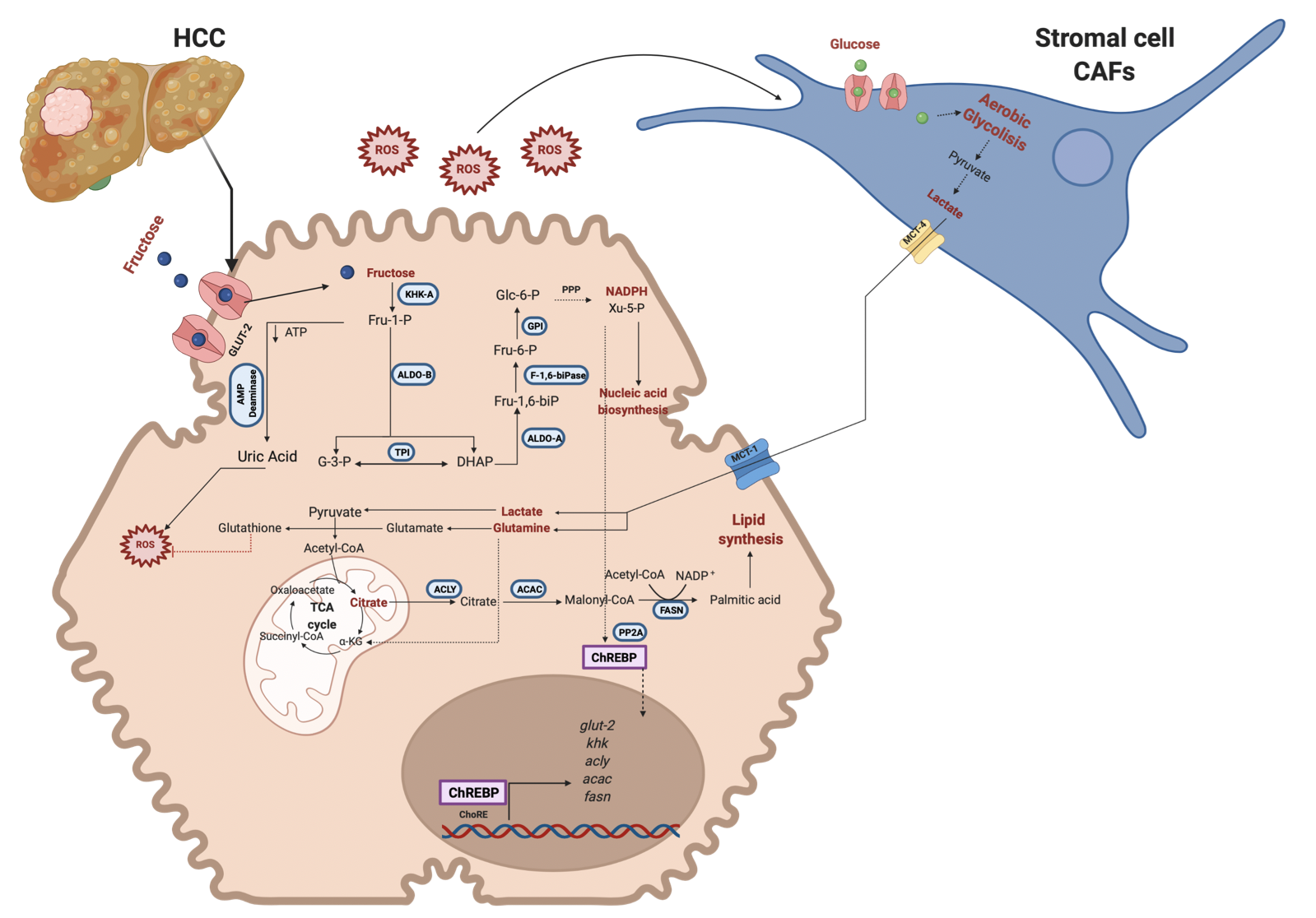 At this point, it is essential to note that fructose metabolism in transformed cells changes from a higher to lower metabolism. Cancer cells need to counteract the elevated ROS levels generated from an exacerbated activity in the cell. That is why it could be observed a metabolic switch in the cell.

The present review relates the consumption of a high fructose diet with MAFLD through the lipid accumulation in the liver and its relationship with obesity, T2DM, and metabolic dysfunctions in patients and the hallmarks of cancer. On the other hand, it is essential to note that fructose metabolism exhibits differences related to the state of development of the disease. In the initial steps, there is a high fructose-related enzymes activity that promotes hepatic steatosis. Still, once the cancer is established, a fructose metabolic reprogramming is carried out in transformed cells to favor proliferation, inflammation, and metastatic properties of the cancer cells. In this scenario, the inhibition of KHK seems to be a promising strategy in the initial steps of the disease. Still, once HCC is established, more studies need to be done to determine if the treatment has consistent therapeutic effects. Furthermore, the activities of some enzymes serve as surrogate markers for poor prognoses, such as FASN upregulation, KHK-A isoform change, and ALDO-B downregulation. A better understanding of the role of fructose metabolism in both scenarios is necessary to diagnose and treat patients and find new strategies for possible druggable metabolic points in fructose metabolism.