Odd Radio Circles and Their Environment

Odd Radio Circles (ORCs) are unexpected faint circles of diffuse radio emission discovered in recent wide deep radio surveys. They are typically about one arcmin in diameter, and may be spherical shells of synchrotron emission about a million light years in diameter, surrounding galaxies at a redshift of ∼0.2–0.6. Here we study the properties and environment of the known ORCs.

Odd Radio Circles (ORCs) are recently discovered circles of diffuse steep-spectrum radio emission with no corresponding diffuse emission at optical, infrared, or X-ray wavelengths. The first three ORCs were found [1] in the Pilot Survey [2] of the Evolutionary Map of the Universe [3], using the Australian Square Kilometre Array Pathfinder (ASKAP) [4]. A fourth was found [2] in data from the GMRT [5] and a fifth was found, also in ASKAP data, by Koribalski et al. [6]. Figure 1 shows an ASKAP image of the first ORC to be discovered. 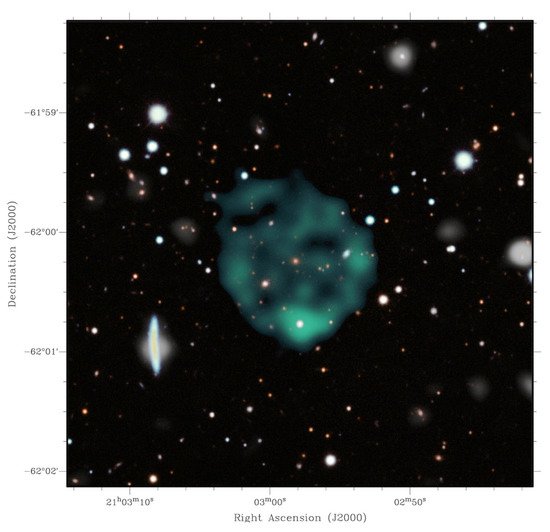 Figure 1. The ASKAP image of ORC1, adapted from Norris et al. [1]. The resolution is 11 arcsec, and the rms sensitivity is 25 μJy/beam, enhanced to show faint features, particularly the internal structure or “spokes” of the ORC. Radio data are shown in green, and the background optical image is taken from the Dark Energy Survey DR1 [8]. For the latter, the DES bands g, r, i, and z were assigned turquoise, magenta, yellow, and red, respectively, and combined using GIMP. The optical/NIR image and the radio image were then combined using a masking technique. Image credit: Jayanne English.
The ORCs superficially resemble supernova remnants (SNRs), but their Galactic latitude distribution is inconsistent with that of SNRs [1]. Similarly, other explanations involving known classes of objects (e.g., starburst rings, gravitational lenses, etc.) have also been shown to be inconsistent with the data [1]. Instead, we are forced to search for other explanations for this phenomenon.
Of the five known ORCs, three are single, and share similar parameters, and are shown in Figure 2. At the centre of each of the three single ORCs, there is a galaxy visible in optical wavelengths (see Figure 2). The probability of this happening by chance is so low as to be extremely unlikely [7]. We therefore call this galaxy the “host galaxy” of the ORC. The properties of the three single ORCs are summarised in Table 1.
Norris et al. [7] argue that the rings of emission represent a spherical shell of synchrotron emission surrounding the host galaxy, and consider two hypotheses for the origin of this shell:
Other suggested explanations for ORCs include radio jets from an AGN seen end-on (Shabala et al., in preparation) and the throats of wormholes [8][9].

Most of the models so far proposed for ORCs [7] depend critically on the ambient density and magnetic field of the region surrounding the ORC. Although an ambient magnetic field will be amplified by the shock that created the ORC, an initial ambient magnetic field is still required to seed that process, and ambient magnetic fields are known to be higher in clusters and over-densities than in a non-cluster environment [7]. Thus, this model suggests that ORCs should occur preferentially in overdensity regions.
Of the three ORCs discussed here, one is located in a significant overdensity, and the other two appear to have a nearby, interacting companion. Studies (e.g., [12]) suggest that only a few percent of galaxies have an interacting companion, and so it appears that the host galaxies of ORCs are atypical. However, we are very cautious in making this claim, as (a) our sample of three is very small, and (b) the technique we have used to find companions may probe more deeply than the techniques used in large-scale searches for companions.
Nevertheless, if this apparent atypicality is supported by further work, it may offer a clue as to why ORCs are so rare (about one every 50 square degrees).