Synthetic dyes have become an integral part of many industries such as textiles, tannin and even food and pharmaceuticals. Industrial dye effluents from various dye utilizing industries are considered harmful to the environment and human health due to their intense color, toxicity and carcinogenic nature.

Imparting color to consumer goods such as textiles is customary practice in many industries [1]. Primarily, it is done to make the products aesthetically pleasant, thereby making them more appealing to the consumers. Indeed, human eyes are incredibly adept at detecting even miniscule color differences. Color could be one of the important determining factors for the consumers in making purchasing decisions, e.g., a textile garment [1][2]. In fact, humans have always been intrigued by colors. For instance, the use of colored garments could be traced back to prehistoric times as early as 3500 BCE in the human civilization [3][4]. Prior to the serendipitous discovery of the first synthetic dye, mauve, by German chemist William Henry Perkins in 1856 [5], dyes and pigments used in coloring of consumer products were derived from natural sources, including vegetables, flowers, woods and insects [3][6]. However, due to numerous desirable attributes such as large-scale production ability, water solubility, versatility in colors and high fastness as compared to natural dyes and pigments, present day industry almost solely depends on synthetic dyes. Moreover, synthetic organic dyes have become indispensable to numerous industries such as textiles, paper, plastics, and even in food and pharmaceuticals [7]. According to several references, currently more than 100,000 different chemicals are synthesized as dyes, and their estimated total annual global production varies from 700,000 to 800,000 tons [8][9][10]. Even though dyes are utilized in numerous industries, the textile industry is the largest consumer of the produced dyes. Unfortunately, often, the efficiency of the industrial textile dyeing process is substantially low. Due to poor exhaustion of dyes onto the textile fibers from the dyebath and poor fixation of dye molecules onto the textile substrate, a considerable amount of dyes is released in the effluent. This makes the textile industry the leading generator of dye effluent. Loss as high as 15% of the total dyestuff is reported in the textile industries and is later released in the effluents [11]. Besides the textile industry, other major sources of dye effluents are the paper and pulp industry, tannery and paint industry and dye manufacturing industry [8].
Dye effluents, popularly also known as dye wastewater, especially from textile dye houses, not only contain dyes but are also rich in other chemicals such as high amount of salts, alkali, acids, surfactants and metals, which are added to the dye mixture to enhance exhaustion and fixation of dyes.
Owing to their intense visibility, their recalcitrance to biodegradation, and potential toxicity and carcinogenicity of many industrially important synthetic dyes, the inevitable release of dyes in the effluents, even in small concentration, from various dye-utilizing industries including textiles, tannin and leather, has severe environmental and health impacts [10][11]. The presence or discharge of dye effluents to the water bodies even in relatively small quantities makes the receiving water virtually unusable for humans and animal consumption, such as drinking, cooking, bathing and washing [12].
Pollution resulting from the disposal of dye effluents is both an environmental and health concern of high importance. Therefore, it is imperative to find efficient dye remediation techniques, which could be employed both at the polluted site and site of origin, including dye houses. However, successful removal of the colored compounds is considered one of the most challenging tasks encountered by wastewater treatment plants (WWTPs) of textile industries [13]. The reason being the synthetic dyes are complex molecules and are usually purposely designed to make them durable by resisting bio, photo and oxidative degradation [14][15][16][17]. Therefore, they remain in the environment for a considerable time. For instance, the hydrolyzed Reactive Blue 19, a commercial textile dye, has a half-life of approximately 46 years at neutral pH and ambient temperature (25 °C) [18]. Another critical factor, which exacerbates the situation during remediation of dyes from wastewater or other environments, is secondary pollution. The breakdown of dye molecules present in the wastewater often results in the generation of more nefarious by-products, including chlorinated organics, phenols and heavy metals [19][20].
Furthermore, the cost associated with dye removal or remediation technologies is also a key factor. Ideally, a dye removal method should be capable of rapidly removing large quantities of dyes from wastewater without generating secondary pollution and cheaper. Technologies for dye removal can be divided into three categories: biological (fungal decolorization, microbial decolorization, adsorption by living or dead microbial biomass, and anaerobic bioremediation), chemical (advanced oxidation processes (AOPs), electrochemical process, and coagulation or flocculation) and physical methods (adsorption, membrane filtration, ion exchange, electro-kinetic coagulation).
Techniques including adsorption, biodegradation, oxidative degradation, electrochemical destruction, ozonation, photochemical and UV assisted degradation have been commonly reported in the literature; however, an efficient and sustainable approach for removal/remediation of dyes from effluents is yet to be established [8]. Since effluents from a wide range of textile and dye manufacturing industries are generated and variations in their composition based on the types of the manufacturing process and products, no specific treatment or remediation method can be employed at all times and places. Instead, a combinatory approach comprised of physical, chemical, and biological methods is more appropriate [21]. Since cost is the significant factor for any process/technology to find eventual adoption in industries, an efficient and widely available cheaper substitutes-based methods of dye removal/remediation would be highly desirable to address cost issues [22]. There is numerous literature available for the usage of a wide range of materials, including natural and synthetic materials for dye removal technologies.

Dyes are colorful compounds designed to impart color to the substrates. They are anchored on substrates such as yarns, fabrics, and plastics. They are also used to color liquids such as gasoline by mixing. Therefore, the common feature of dyes is their ability to absorb or emit light in the visible region (400–700 nm) to produce color [11]. In addition to the chromogene–chromophoric system, the moiety responsible for producing color, a dye may contain other chemical groups such as bridging groups (auxochromes) and reactive solubilizing groups (Figure 1). Based on the intended application, anchoring methods such as physical adsorption or covalent fixation, and hue of the color, the synthetic dyes can have diverse chemical structures. Typically, the chromogene is an aromatic structure, usually comprised of benzene, naphthalene, or anthracene rings. These rings carry binding chromophores containing double conjugated links having delocalized electrons to form conjugated systems. Chromophores are usually the azo group (–N=N–), methine group (–CH=), ethylene group (=C=C=), carbon-sulfur (=C=S; ≡CS–S–C≡), carbonyl group (=C=O), nitro (-NO2; –NO–OH), nitroso (–N=O; =N–OH), carbon-nitrogen (=C=NH; –CH=N–) or chinoid groups. The ionizable groups, such as –COOH (carboxyl), –NH2 (amino), –SO3H (sulfonate) and –OH (hydroxyl) are the common auxochromes and are responsible for the binding capacity of the dye molecules onto the textile materials [4][23]. Reactive dyes, one of the most popular classes of textile dyes, consist of functional groups that can be covalently linked to the substrate, such as cellulosic fibers. The reactive functional groups may contain labile fluorine, chlorine, methyl sulfone, or nicotinyl leaving groups (see Figure 1). The reaction between the substrate and dyes occurs via nucleophilic substitution at leaving groups (–C–Cl), activated by the adjacent nitrogen present in the triazine ring [24], see Figure 1.

Figure 1. Chemical structure of CI Reactive Blue 109, a dichlorotriazines type reactive dye. (Adapted with permission from reference [25], Copyright 2017 Elsevier).
Synthetic dyes can be catalogued based on different parameters, including the molecular structure, methods of application, solubility, ionic and basic or acidic nature [7][8]. Classification of dyes based on the chromophore groups is considered a more systematic approach [7]. Azo dyes, acridine dyes, arylmethane dyes, anthraquinone dyes, nitro dyes, xanthenes dyes and quinine–amine dyes (Figure 2) are some of the important classes of dyes based on their chromophore groups [7]. They make the largest group of synthetic organic chemicals with a 70% share of all produced dyes worldwide [7][26]. The main characteristic of azo dyes is their nitrogen-to-nitrogen double bonds (–N=N–) that are linked to at least one aromatic group, either benzene or naphthalene. The azo dyes can be further subdivided into monoazo, diazo and triazo types. Some of the typical azo dyes are Acid Orange 7, Methylene Orange, Acid Orange 20, Orange II, Methyl Red, Reactive Red 2, Reactive Orange 16, Reactive Black 5, Congo Red, Solvent Red 19, Direct Blue 160, Basic Yellow 15, Basic Blue 41, Disperse Orange 1, Disperse Red 1, Amido Black, Reactive Orange 16, and Amaranth [7][27]. Despite notoriety because of their toxicity and other hazardous effects, azo dyes are the most widely used dye type across many different industries, including textiles, leathers, papers and even in food and cosmetics [7][28][29]. For example, Acid Orange 7 is used in paper, textile and leather industries [30], Solvent Red 19 is usually added in gasoline (diesel) [27], and Amaranth is mainly used to color food and cosmetics industries [29]. Different types of dyes based on other classification methods, their solubility, and major applications are presented in Table 1. 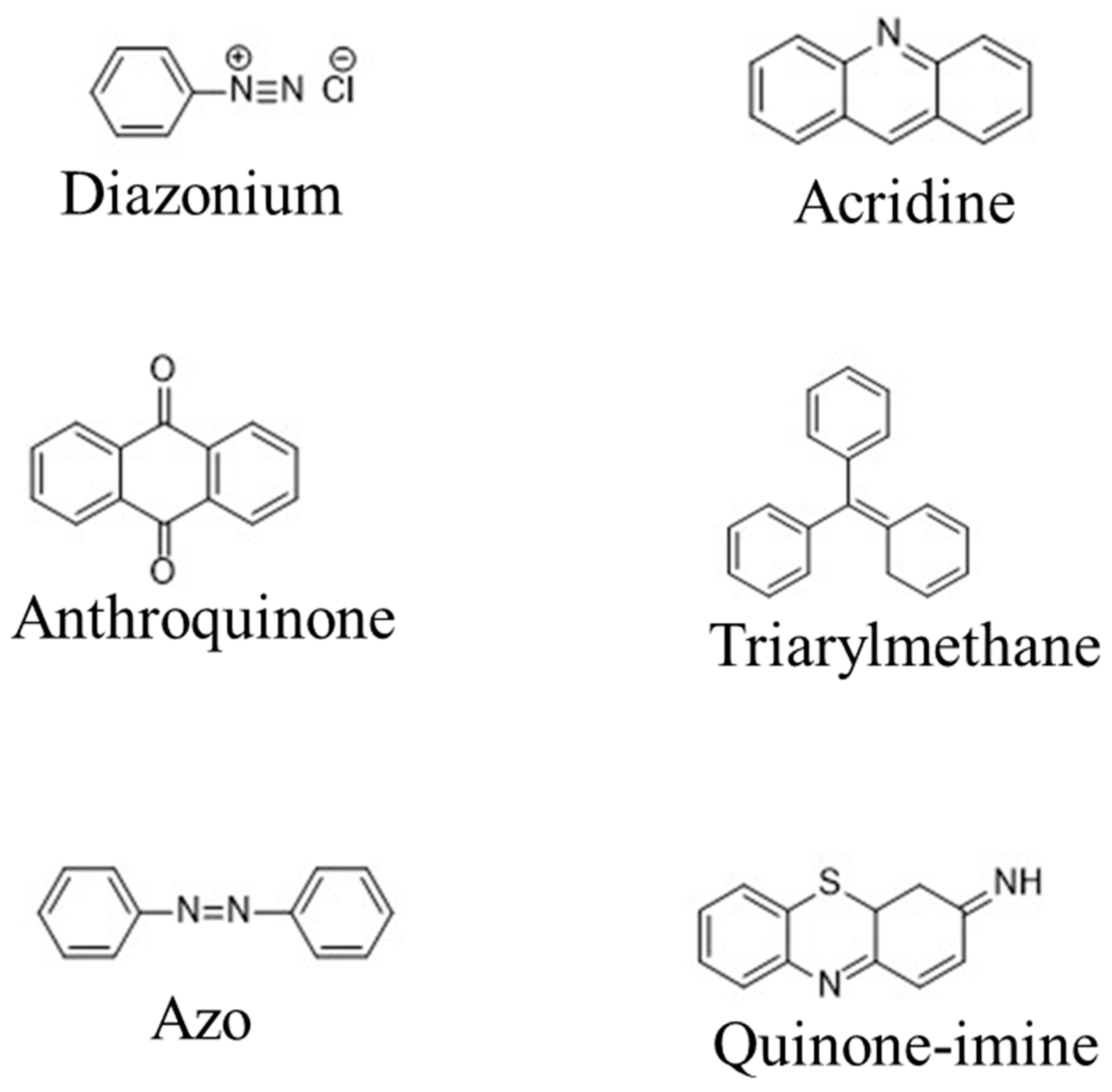 With the rapid increase in the use of industrial dyes over the last few decades, different technologies useful for the removal of dyes from aqueous solutions have been investigated. More than a thousand research articles have been reported in the literature on dye removal technologies indicating the high demand for new techniques. The recent advancements in dye removal technologies include adsorption, advanced oxidation processes, chemical coagulation-flocculation, electrochemical treatment, membrane filtration, biological treatment, reverse micelle extraction and other techniques [31]. Albeit efforts have been made to develop various dye removal technologies, there are many challenges associated with them. The major setbacks of commonly used dye removal technologies include high production cost, high labor involvement, and complexity. Many of those technologies use petroleum-based materials, raising concerns over their environmental impact as they are derived from non-renewable and non-biodegradable sources. Furthermore, chemically synthesized materials are practically inapplicable due to multi-step synthesis processes and the use of many toxic chemicals, including organic solvents. Interestingly, natural polymers or biopolymers including cellulose, chitin and chitosan have recently been considered for dye removal technologies due to their relative abundance, low cost, tunable properties such as surface area, pore size, pore volume, ease of handling and environmental benignity. Biopolymers are biodegradable and possess an added advantage over synthetic materials, exhibiting no adverse effect on the environment or living beings. Biopolymers are biocompatible and derive from renewable sources, making them sustainable alternatives for petroleum-based or chemically synthesized materials. Due to the presence of functional groups including hydroxyl (–OH), amine (–NH2), carboxyl (–COO−) and amide (–NHCOCH3), surface functionalization of biopolymers is relatively easy without influencing the biological and physicochemical properties of the surface. Surface-modified biopolymers show enhanced compatibility, rigidity, flexibility, thermal and chemical stability and fast response [32]. Biopolymer-based materials can be fabricated into a diverse range of structures, including spherical, films, cylindrical, bead, fibers, scaffolds, blocks, micro- and nanoparticles, and micro- and nanofibers. However, current applications of biopolymers are also associated with several setbacks, including microbial contamination, variations in the properties as a result of the source of the material, presence of other materials and impurities requiring an initial purification process. This review summarizes current developments of the three major biopolymer-based dye removal technologies: adsorption, AOPs and membrane filtration and their major advantages and limitations.