Genus Bacillus in the Biodamage/Biodegradation of Plastics

In the context of rapid development of technology and construction, as well as creation of new materials, the issue of material biodamage and appropriate protection appears as the focus of substantial research [1][2][3]. Biodamage (biodegradation) of materials can be responsible for human-made ecological catastrophes [1]. Bactericides have traditionally been used to prevent microbiologically influenced corrosion (MIC), although they pose health, safety and environmental problems [4]. Derivatives of substandard pesticides are proposed as inhibitors of MIC [5].
On the other hand, the processes of biodegradation involve chemical elements in geochemical cycles leading to the removal of xenobiotics from the environment [3].
As an alternative, the use of microorganisms is suggested as a protective means against biodamage [6]. However, the research in the field of biological control has been conducted under laboratory conditions and its effectiveness has not yet been confirmed [7].
Sulfate-reducing bacteria (SRB) are most commonly associated with MIC, while little attention has thus far been paid to the representatives of other taxonomic groups [7].

2. Bacteria of the Genus Bacillus in the Biodegradation of Some Synthetic Plastics

Bacteria of the genus Bacillus biodegrade polyethylene (PE), polypropylene (PP), polystyrene (PS), polyvinyl chloride (PVC), poly (ethylene terephthalate) (PET) and polyurethane (PUR). These polymers are synthesized from fossil hydrocarbons, a non-renewable resource, and comprise more than 90% of the global total production of polymeric materials [8]. Enzymes released by microorganisms during growth and development act as aggressive media in biodamage of insulating materials [1]. In particular, such compounds are able to produce the bacterium B. mesentericus (B. subtilis), found on polymer coatings [1]. Degradation of polyethylene can be classified as abiotic (caused by temperature and UV irradiation) or biotic (biodegradation caused by the action of microorganisms). Microorganisms modify and consume the polymer, leading to changes in its properties. Bacteria of the genus Bacillus, among other bacterial strains, are involved in the biodegradation of polyethylene [9][10]. B. amyloliquefaciens, B. brevis, B. cereus, B. circulans, B. halodenitrificans, B. mycoides, B. pumilus, B. sphericus and B. thuringiensis appear to be particularly active agents causing biodegradation of this material. Restrepo-Flórez et al. [9] highlight that although the damage to polyethylene is connected to only one of these two damage modes, both typically act cooperatively in nature [11]. The abiotic mechanisms of deterioration of polyethylene have been described in [11]. The biodegradation of polyethylene and mechanisms associated with this process are analyzed in review publications [9][10]. The biodegradation of polyethylene under normal conditions is extremely slow, while the knowledge of complete metabolic pathways involved in the process, as well as the inventory and structure of respective enzymes, is quite basic [9]. The authors discuss changes of PE in the presence of microorganisms: (1) functional groups on the surface; (2) the surface topography; (3) the hydrophobicity/hydrophilicity of a surface; (4) mechanical properties; (5) crystallinity; (6) molecular weight distribution. It is indicated that the loss of molecular weight and the oxidation of the molecules are the result of synergistic effects caused by biotic and abiotic factors (photo-oxidation or heat treatment) [9]. In particular, thermo-irradiation pretreatment was important for the biodegradation of PE by Bacillus amyloliquefaciens (B. amyloliquefaciens) [12]. Biofilm colonization is the initial step in the degradation of this polymer [9]. Bacteria that form biofilms are capable of producing surfactants, molecules that can mediate the attachment process of microorganisms to a hydrophobic surface [9]. Hydrocarbon polymers are resistant to biodegradation, which results from highly stable C-C and C-H covalent bonds [13]. Restrepo-Flórez et al. [9] note the theoretical possibility of polyethylene being used as a carbon source for microorganisms, similar to many other hydrocarbons, but subject to the reduction in PE molecular weight by the chemical/biochemical processes. The presence, in some members of the genus Bacillus, of enzymes related to the Pseudomonas putida GPo1 membrane-bound alkane hydroxylase system [14] increases this probability. Such enzymes are involved in a complicated chemical reaction: the regio- and stereospecific activation of C-H bonds. There are reports that the weight loss of degradable polyethylene (PE with chemical or photoinitiators or both) positively correlated with CO2 emission in the consortium of Pseudomonas frequentans + B. mycoides under the condition of treatments with or without preheating [15]. Based on this, the researchers conclude that the disposal of degradable polyethylene by these bacteria is a source of carbon.
The initial step involves hydroxylation of C-C bonds, generating primary or secondary alcohols, which are further oxidized to aldehydes or ketones, and then to carboxylic acids [16]. Thus, microbial oxidation decreases the number of carbonyl groups due to the formation of carboxylic acids. Carboxylated n-alkanes are analogous to fatty acids, which can be catabolized by bacteria via the β-oxidation system pathway (Figure 1). However, neither the breaking of C-C bonds within the backbone of PE polymers nor the generation of long carbon chain carboxylic acid hydrolysis products have been reported [16]. 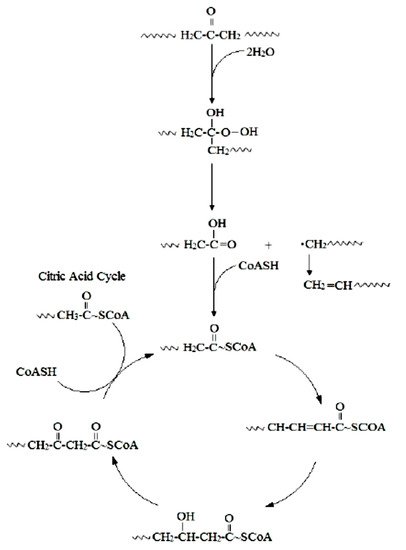 Figure 1. Mechanism for the biodegradation of PE [16].
Thus, bacterial isolates B. amyloliquefaciens contributed to the depolymerization of biodegraded products in extracellular media, indicating the biodegradation process of PE [17]. The participation of B. brevis in PE biodegradation is noted in the work of Wasserbauer et al. [18]. B. cereus degraded UV-irradiated PE associated with a pronounced extracellular production of both laccases and MnP [19]. Biodegradable properties against PE were also observed for B. cereus strain Ma-Su CECRI-1 [20] and B. cereus strain A5,a [21]. In the latter case, a high biodegradable activity (35.72 ± 4.01%) in relation to PE was registered [21]. The ability to biodegrade PE is also inherent to B. subtilis [22]. B. subtilis produced surface active compounds (biosurfactants) that enhance the degradation process of PE [23].
The ability of B. mycoides and B. subtilis (Bacillus species indigenous to the Niger Delta mangrove soil) to biodegrade polyethylene was studied by Ibiene et al. [24].
Bacillus safensis and B. amyloliquefaciens have demonstrated the biodegradable ability for low-density polyethylene thermoplastic. Moreover, B. safensis had better biodegradable ability than B. amyloliquefaciens, shown by the registered weight reduction [25].
It is worth noting that only genus (Bacillus) identification of bacteria has been established in most studies. Thus, in a number of studies, Bacillus sp. are indicated as polyethylene-degrading bacteria [26][27][28][29][30][31], the ability of which to form a biofilm on the surface of this material and reduce its hydrophobicity by isolated bacteria was noted in the article of Yang et al. [29]. The biofilm formation on the surface of polyethylene and its biodegradation were also observed for B. mycoides [15].
Polypropylene was biodegraded by the B. flexus + Pseudomonas azotoformans and B. flexus + B. subtilis associations [32]. Polypropylene was subjected to biodegradation by B. cereus [33][34], B. thuringenesis and B. licheniformis [34]. The latter three species are also involved in the biodegradation of polypropylene-poly-L-lactide [34]. Degradation of PP microplastics by B. gottheilii caused a weight loss of 3.6% after 40 days [35].
Biodegradation of polypropylene has been improved by using polymer blends of carbohydrates, starch or cellulose blends such as that reported for polyethylene and polystyrene [36]. The use of the blends facilitates adhesion of the microorganisms to the surface of the polymer and acts as a co-metabolite. Biodegradation of polycaprolactone blended PP has also been demonstrated using lipase since lipase is well known to degrade the ester linkages of polycaprolactone [36].
Bacillus sp. degrades polystyrene [37][38][39]. The following studies provide insights into biodegradation of PS caused by B. aryabhattai [40], B. subtilis [41], and B. paralicheniformis [42]. B. cereus and B. gottheilii reduced PS granule weight by 7.4% and 5.8%, respectively, within 40 days [35]. B. cereus was also noted as a biodegradable PS in [43].
Strains B. subtilis and B. cereus formed biofilm on PET and poly (lactic acid), demonstrating biochemical activity and accelerating biodegradation of both plastic materials [44]. B. cereus was also identified as part of two consortia capable of biofilm formation and PET degradation [45]. B. megaterium formed a biofilm on PET film [8]. Carboxylesterases from B. licheniformis and B. subtilis partially hydrolyzed PET fibers and showed a high activity against PET oligomers [46].
The mechanism of PET biodegradation is demonstrated in Figure 2. The PET-digesting enzyme labeled as PETase converts PET to mono(2-hydroxyethyl) terephthalic acid (MHET), with minimal amounts of terephthalic acid (TPA) and bis(2-hydroxyethyl)-TPA as secondary products [36]. 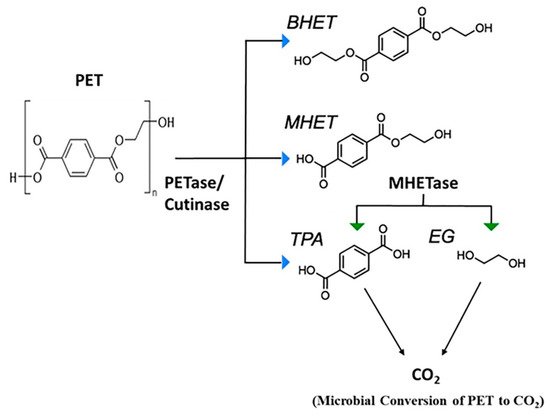 Figure 2. Microbial degradation of PET [36]. PETase, polyethylene terephthalate (PET) hydrolase or PET-digesting enzyme; BHET, bis(2-hydroxyethyl) terephthalic acid; MHET, mono(2-hydroxyethyl) terephthalic acid; TPA, terephthalic acid; EG, ethylene glycol.
B. flexus has been proved to biodegrade poly (vinyl chloride) (PVC) film [47]. Bacteria of this species have been able to form dense biofilm on the plastic film surface and cause a decrease in the mean molecular weight of the PVC film [47]. Bacillus sp., triggering degradation of PVC, caused weight loss of the material of 0.26 ± 0.02% in comparison to initial weights after 90 days [31].
The involvement of bacteria of the genus Bacillus in the biodegradation of polyurethanes is discussed in a review article by G.T. Howard [48]. PUR-degrading bacteria are B. chitinolyticus and B. pumilus [49] and B. subtilis [50][51][52].
Oxidative degradation has been generally associated with poly(ether-urethane) [53]. This mechanism is illustrated by the following reactions.
Thus, the reactive oxygen species initiate degradation of polyether urethanes through oxidative attack of the soft segment. This reactive oxygen species abstracts an alpha-methylene hydrogen atom from the polyether soft segment. The addition of a hydroxyl radical to the carbon radical forms a hemiacetal, which oxidizes to an ester. Acid hydrolysis of the ester results in chain scission of the soft segment and formation of acid end groups. Significant chain scission results in the solubilization and extraction of low molecular weight degradation products [53].
A similar oxidative mechanism was proposed for hard segment degradation [53]. Oxygen radicals abstract an alpha-methylene hydrogen atom from the chain extender at the urethane. Additional hydroxyl radicals combine with the chain radical to form a highly reactive carbonyl hemiacetal. Oxidative hydrolysis of the carbonyl hemiacetal results in chain scission and formation of an unstable carbamic acid and carboxylic acid end groups [53]. The carbamic acid decarboxylates readily to form a free amine. The mechanism of polyurethane biodegradation with the participation of polyurethane esterases is shown by Mohanan et al. [36] (Figure 3). 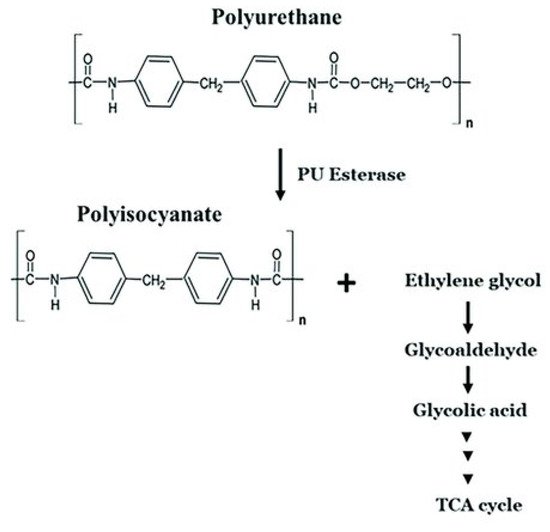 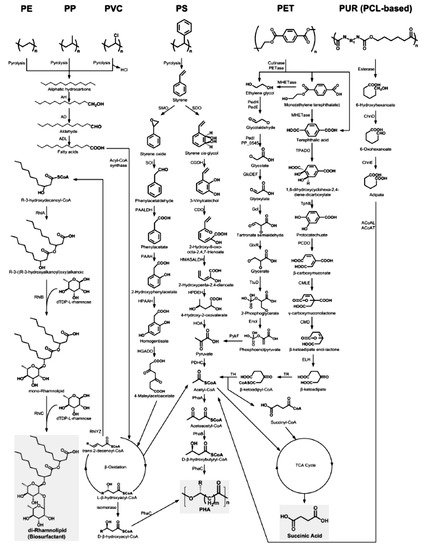 3. The Application of Bacteria of the Genus Bacillus to Materials’ Biodamage Control