Radon and thoron measurement studies have been widely conducted and reported all over the world. Generally, the techniques used relate to the passive nuclear track detectors. Though some surveys shown that passive monitors for radon are sensitive to thoron, and hence the measured results might be probably overestimated the radon concentration. This study investigated the radon and thoron measurement in domestic and international using passive radon-thoron discriminative measuring device, commercially named RADUET. This paper attempts to provide an understanding and evident roadmap for discriminative measurements of radon isotopes.

Many radon surveys were conducted to investigate radon levels in the world[1][2][3][4][5][6]. Generally, a passive radon monitor is used for a large-scale survey because of its quiet and low cost. However, it was reported that some of them had a high sensitivity to thoron, which is one of its radioisotopes, and the measurement results might have been affected by the existence of thoron (220Rn)[7][8][9]. The passive radon monitor which was pointed out a high sensitivity to thoron had been used for a nationwide radon survey in some countries[4][5][6][7][10]. Therefore, attention should be paid to those reported where possible thoron presence would significantly bias results for radon measurement. From a viewpoint of radiation protection, thoron was historically ignored because of its half-life (55.6 s) and difficulties in measurement and calibration. It should be noted that the quantity of thoron can be larger than that of radon in some areas such as Yangjang, China[11]. If a passive radon monitor cannot discriminatively measure radon and thoron, the measurement results will be overestimated, and it cannot be corrected due to no significant relationship between radon and thoron concentrations[8][12]. Therefore, radon and thoron should be discriminatively measured for an accurate dose assessment and future lung cancer risk assessment due to indoor radon[13].

This shows the passive radon-thoron discriminative monitors named a RADUET developed in a couple of decades.

The RADUET is a passive integrated radon–thoron discriminative monitor, which was developed by Tokonami et al.[14]. Schematic drawings of the RADUET monitor are shown in Figure 1. It has double plastic chambers with different air-exchange rates or air-diffusion rates. A CR-39 (the allyl diglycol carbonate) detector, which is used to detect alpha particles emitted from radon, thoron and their progenies, is placed at the bottom of each chamber with sticky clay. The low air-exchange rate chamber is made of electro-conductive plastic with an inner volume of ~3.0 × 10−5 m3. The high air-exchange rate chamber is also made of the same plastic material, but it has six holes in the wall and has an electroconductive sponge covering the holes to prevent radon and thoron decay products and aerosols from going into the chamber. Thus, radon gas can diffuse into the low air-exchange rate chamber through an invisible gap between the lid and the bottom of the chamber. Subsequently, this gap functions as a high air-diffusion rate barrier; due to its very short half-life (55.6 s), only a very small amount of thoron goes into the chamber compared to the amount for radon with a longer half-life (3.82 d). Additionally, both radon and thoron can get into the high air-exchange rate chamber. The air-exchange rates of the low and high air-diffusion rate chambers are 0.7 h−1 and 10 h−1, respectively[15]. The air-exchange rates of RADUET chambers differ by about two orders of magnitude. Correspondingly, the difference of track density between the two CR-39s detectors from each chamber makes it possible to discriminate between radon and thoron. 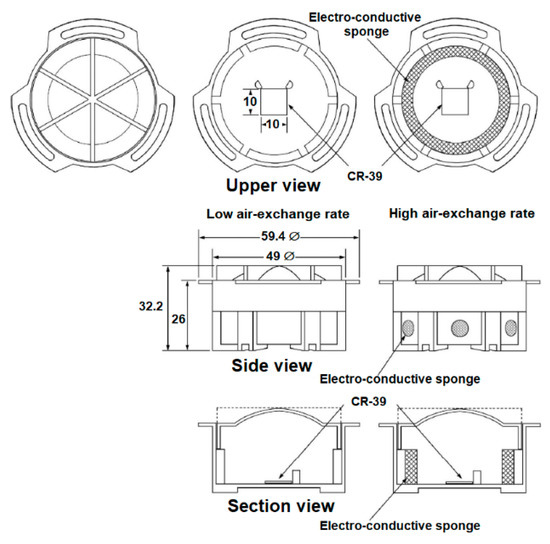 is the background track density of the CR-39 detector in tracks m−2.

To determine the calibration coefficients, RADUETs should be calibrated at a reference laboratory. The calibration coefficients are estimated by a correlation between the track density and the time-integrated radon and thoron concentrations from three or four exposure levels of radon and thoron[17]. In the calibration procedure of the radioactive gas monitor, most RADUET monitors are calibrated using a secondary method based on a calibration via a reference monitor. Thus, five to ten monitors, depending on the size of the calibration chamber, are placed in the middle of the chamber for each reference exposure condition. The introduction level of radon and thoron in each calibration chamber should be assigned to three or four different levels for the time-integrated radon and thoron concentrations such as ~500 kBq h m−3, ~1000 kBq h m−3, ~2000 kBq h m−3 and ~3000 kBq h m−3. These calibrations are intended to obtain traceability to primary standards of radon isotopes and to test linearity of monitor response over the whole range of interest of exposure values. Throughout the calibration experiments, concentration of radon isotopes in the chamber is continuously monitored with active measurement equipment which has itself been compared with a standard for radon isotopes. Moreover, environmental parameters, such as humidity, pressure and temperature in the calibration chamber should be continuously measured and constantly observed. After exposure, the CR-39 detectors from RADUET are chemically etched and afterwards the number of tracks on the CR-39 is counted as used for measurement samples. In addition, the background noise from five or ten CR-39 detectors that have not been exposed to radon and thoron and have been processed under the same chemical etching and counting conditions are measured at the same time as the calibration. Subsequently, the four calibration curves are plotted as the time-integrated radon or thoron exposure (on the X axis) versus the track density (on the Y axis) for the high and low air-exchange rates of RADUET. Thus, fRn1, fTn1, fRn2 and fTn2 are given by fitting each calibration curve using linear regression[14]. The slope of the linear line of each calibration curve is the calibration coefficient or calibration factor between the density of the tracks per unit of time (tracks m−2 h−1) and the activity concentration (kBq m‾3) of the reference atmosphere.

The detection limit of the average radon (

are the true values of the average radon and thoron concentrations.

are the standard uncertainties of the estimators of

are the standard uncertainties of detection limits of average radon and thoron concentrations associated with measurement results.

The advantages of the radon-thoron discriminative monitor known as the RADUET were reviewed and as well the strategic plans for regional and national surveys in various countries. Most were regional surveys of indoor radon and thoron measurements.