Wheat is one of the most important cereal crops in the world as it is used in the production of a diverse range of traditional and modern processed foods. The ancient varieties einkorn, emmer and spelt not only played an important role as a source of food but became the ancestors of the modern varieties currently grown worldwide. Hexaploid wheat (Triticum aestivum L.) and tetraploid wheat (Triticum durum Desf.) now account for around 95% and 5% of the world production, respectively. The success of this cereal is inextricably associated with the capacity of its grain proteins, the gluten, to form a viscoelastic dough that allows the transformation of wheat flour into a wide variety of staple forms of food in the human diet. This review aims to give a holistic view of the temporal and proteogenomic evolution of wheat from its domestication to the massively produced, high yield crop of our day.

Wheat is a high-yielding crop that is easy to store and is very adaptable to different climates. From the most primitive form of wheat to the species currently grown, these and other desirable characteristics have been selected and developed by human societies since ancient times [1][2]. Its domestication is thought to have occurred in the Fertile Crescent about 10,000 years ago and has spread to all parts of the world through the first farmers, adapting the domesticated populations to different environments [3]. Wheat is able to grow in temperate, Mediterranean, and subtropical regions of the two hemispheres, mainly due to its enormous genetic diversity. For example, there are more than 25,000 varieties of Triticum aestivum L. adapted to different temperate environments [4]. Wheat can be classified according to when it is sown. Winter wheat is sown in autumn because the seedlings need a period during the vegetative phase when temperatures are between 0 and 5 °C. About 80% of the world’s wheat is winter wheat. Spring wheat is planted in spring and harvested in late summer or fall in South Asian countries or North Africa [5].
The most important varieties of modern wheat are tetraploid durum wheat (Triticum durum) and hexaploid bread wheat (Triticum aestivum L.), which have different attributes in terms of genomic composition, grain composition, and end use [6]. The progressive domestication of these wheat species led to the restructuring of the rachis and glumes, converting the brittle ears of wild species into non-brittle and bare grain ears in cultivated species [7]. These morphological effects of domestication facilitated the cropping of wheat, leading to an exponential increase in its economic importance [8].

Wheat is a good source of complex carbohydrates, with the starchy endosperm being the major storage tissue and accounting for about 80% of the wheat grain. Unlike simple carbohydrates, such as sugars, complex carbohydrates are preferred as they provide a more sustainable energy source as they gradually release energy according to the body’s needs [9]. Additionally, diets high in these complex carbohydrates lead to fewer health problems [10] and wheat starch provides a good source of energy in nutrition (1550 kJ/100 g) [9][11]. Compared to ancient wheats, the carbohydrate contents in durum (71%) and common wheat (75%) are slightly higher than, for example, spelt (68%) and einkorn (67%), which provide lower carbohydrate contents [12]. Fiber is also a very important dietary factor. The majority of dietary fiber in wheat is found in the white layers, and after wheat milling, the resulting white flour contains 2.0–2.5% fiber [13]. Thus, 40 g of white wheat bread can provide about 1 g of dietary fiber, whereas a similar serving of whole wheat bread can provide 3–4.5 g of dietary fiber. A high-fiber diet is positively associated with health benefits [14][15]. As well as the carbohydrate content, the ancient varieties, spelt (12%), einkorn (9.8%), and emmer (9.8%), have a lower fiber content than common wheat (13.4%) [16][12][17].
Lipids are a relatively minor component (2.5–3.3%) of wheat caryopsis, and 35–45% of wheat lipids are in the endosperm. Wheat has significant levels of lipids of various types, such as acylglycerols, fatty acids, and phospholipids, between others [18]. Lipids play an important role in the human diet as they are a high energy source and form the structure of cell membranes [19]. Although grain lipidomics is rather complex, there is experimental evidence that ancient wheats (einkorn, emmer, and spelt) have characteristic lipidomic profiles that are different from each other [20]. In general, ancient wheats, except for eikorn, have a higher lipid content than common wheat [21][22], but einkorn has higher monounsaturated fatty acids, lower polyunsaturated fatty acids, and lower saturated fatty acids than durum wheat, which has been proven to be good for human health [23].
Wheat, depending on the wheat genetic background and fertilizer inputs, can provide a protein content. Nevertheless, durum wheats provide more protein than most other cereals and the distribution of essential amino acids is at least as good or better than other cereals [9]. The protein content of wheat can, in general, vary between 9% and 18% of the grain weight [24][25]. For example, common wheat intended for the production of cakes and/or biscuits will ideally have a protein content of 7–11%, while wheat intended for the production of high-volume loaf bread typically requires a 12% or higher protein content (Figure 1) [13]. When compared to ancient wheats, modern wheat has a possibly lower protein content, as the grain of modern wheat is larger and heavier, which produces a larger starchy endosperm, which, in turn, lowers its protein content. In fact, in einkorn, the protein content is 15.5–22.8% and the percentage of amylose is 23.8%, whereas in common wheat, the protein content and amylose percentages are 12.9–19.9% and 28.4%, respectively [26]. 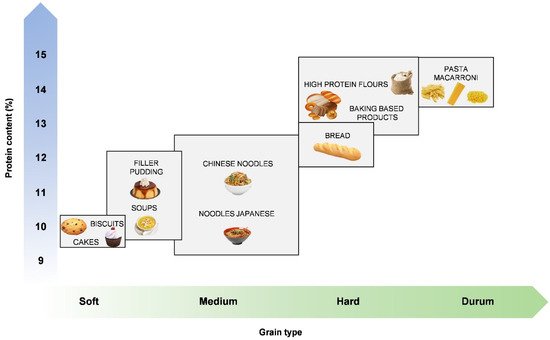 Figure 1. Examples of the most appropriated varieties according to the hardness of the grain and protein content for specific final products.
Furthermore, the amino acid composition of wheat lacks essential amino acids, such as lysine, threonine, and methionine [27], exhibiting a higher content of glutamine (>30%) and proline (>10%) residues. For example, glutamine and glutamic acid are involved in several important biological processes, such as gene expression regulation, intracellular protein turnover, nutrient metabolism, and oxidative defense [28]. On the other hand, proline residues confer some resistance to gluten proteins to proteolysis by digestive enzymes in the gastrointestinal tract [29]. As gluten is rich in proline, it produces a compact and hard structure that usually presents difficulties in digestion and elimination [30]. Some of these digestion-resistant peptides are believed to be related to adverse immune processes in susceptible people [31]. In celiac disease, some of these peptides are responsible for the onset of the disease, triggering an abnormal immune system response in genetically predisposed individuals [32][33]. There is evidence that the D genome of bread wheat has more immunogenic epitopes than the A and B genomes. Thus, it is expected that diploid and tetraploid wheats (T. monococcum and Triticum durum, for example) tend to contain less immunogenic epitopes for celiac patients than bread wheat [34]. In general, gliadins are considered the main cause of problems for celiac patients and the most immunogenic sequences occur in the N-terminal repetitive domain of α-/β-gliadins, which mainly consist of glutamine, proline, and aromatic amino acids [35][36]. Currently, several studies have explored the immunotoxicity for celiac patients of ancient and modern common wheat varieties and also other wheat species [37]. A study focused on the content of celiac-related epitopes of ancient and modern T. aestivum and T. durum wheat varieties, and also spelt showed the following relationship: spelt > wheat landraces > modern wheat varieties = tetraploid varieties [38]. It was hypothesized that the breeding programs could have led to the increase of the glutenin content in wheat, therefore decreasing the gliadin to glutenin ratio [38]. In the same way, Prandi et al., analyzing the gluten peptides released after in vitro digestion of different old and modern Triticum varieties, found that older varieties compared to modern varieties had higher amounts of immunogenic peptides, thus concluding that both ancient and modern varieties are not safe for consumption in the case of celiac patients [39]. Furthermore, other authors concluded that the total quantitative amount of immunogenic peptides is not directly related to the ploidy level or their origin (ancient/ modern). For example, common wheat (hexaploid) showed the same amount of immunogenic peptides as emmer and durum wheat (tetraploids) [39][40]. Nevertheless, all the results point to a natural inter-varietal genetic difference affecting the amount of celiac-related epitopes, which makes it possible to identify accessions presenting a lower amount of T cell stimulatory epitope sequences and therefore are more suitable for wheat breeding programs [37][41].
In addition to the main components of wheat, proteins, carbohydrates, and lipids, wheat grain is also an important source of phytochemicals, vitamins, antioxidants, and macro and micronutrients that are important components of human health [13].