Hydrogen sulfide (H2S) is a colorless, toxic gas readily soluble in water with a pungent odor of rotten eggs. It can be ionized to H+, HS−, and S2−in aqueous solution; although the HS−cannot cross the cell membrane, H2S, acting as a small liposoluble molecule, is five times more soluble in lipophilic solvents than in water, can permeate the lipid membrane freely, because of H2S’s poor water solubility, it is difficult to long-distance transport; however, SO42−and sulfur compounds can be realized long-distance transport through xylem vessels to participate in endogenous H2S metabolism in plant cells”. H2S is widely regarded as a harmful gas produced in industrial production until the middle of the late 1990s.

Hydrogen sulfide (H 2S) is a colorless, toxic gas readily soluble in water with a pungent odor of rotten eggs [1][2]. It can be ionized to H + , HS − , and S 2− in aqueous solution ; although the HS − cannot cross the cell membrane, H 2S, acting as a small liposoluble molecule, is five times more soluble in lipophilic solvents than in water, can permeate the lipid membrane freely, because of H 2S’s poor water solubility, it is difficult to long-distance transport; however, SO 42− and sulfur compounds can be realized long-distance transport through xylem vessels to participate in endogenous H 2S metabolism in plant cells” [3][4][5]. H 2S is widely regarded as a harmful gas produced in industrial production until the middle of the late 1990s. The physiological role and importance of H 2S was gradually recognized by researchers. It was discovered that H 2S can be produced by mammals through cysteine metabolism. With the further study of H 2S as a gas signal molecule, many new physiological functions of H 2S- and H 2S-induced effects are of increasing interest, and it is considered as the third gas signaling molecule, which can be produced internally and plays multiple physiological functions in plants and animals. In recent years, more and more excellent research works on H 2S have been done, and it is clearer and clearer to the mechanism of crosstalk between H 2S with other molecules to regulate plant growth and development [2][6][7].

Water condition, affecting plant morphology, physiological, biochemical metabolism, and geographical distribution, is one of the important environmental factors for plant growth [8][9][10][11]. As the global warming, distribution of rainfall is seriously uneven, which leads to frequent waterlogging, and plant’s growth and development are impacted, especially xerophytes [9][12]. During the waterlogging period, although most vascular plants were obviously damaged and even died, the main cause of waterlogging damage to plants is not the water itself but secondary stress induced by excessive water [13][14]. Researchers initially found that plants accumulate higher than normal levels of H 2S when exposed to stress. With the continuous in-depth study of the mechanism of stress response by many researchers, more and more evidence show that H 2S plays a very important and extensive role in many stress processes in plants, including hypoxic stress induced by waterlogging [15][16].

A large number of studies have confirmed that H 2S participates in the regulation of plants response to drought [17][18][19], extreme temperature [20][21][22][23], high salt [24][25], ultraviolet light [26], high osmotic pressure [27][28][29] and heavy metal (cadmium, chromium, lead, copper, mercury, etc.) [30][31][32][33][34][35][36][37][38] and significantly improves the stress tolerance of plants. Because endogenous H 2S can be produced in plant cells, and H 2S’s functions could be strengthened with the application of exogenous H 2S. In order to study expediently, the application of H 2S donors to plants has become a common method, especially when H 2S responds to abiotic stresses. Waterlogging stress, which H 2S is involved in response to in plants, acts as abiotic stress with significant destructive power, and this review will focus on the role of H 2S as a signaling molecule in plant response to hypoxia stress induced by waterlogging [3][39][40].

2. The Role of H2S in Response to Hypoxia Stress Induced by Waterlogging in Plants

Waterlogging stress leads to the decrease in oxygen concentration in the rhizosphere of plants, resulting in the formation of hypoxia and anoxia. It directly acts on roots, making root hypoxia, nutrient absorption efficiency decreases, reduction in growth rate, further influences growth, and development of plants [41][42][43][44]. What is more, after a long period of evolution, plants have developed a series of stress response mechanisms. After sensing the anaerobic signal, a series of morphological, anatomical, physiological, and metabolic changes are caused by regulating the expression of genes so as to improve the ability to tolerate hypoxia and maintain the survival of individuals [45][46][47][48][49].

Plant waterlogging resistance is controlled by a combination of multiple factors [50][51][52][53][54]. The specific adaptive mechanism involves secondary signal transduction, gene expression, and protein synthesis, antioxidant enzyme system, and fermentation pathway under hypoxia stress [55][56][57][58]. Plants adapt to hypoxic stress from two aspects: avoidance and tolerance, that is, with promoting oxygen absorption and transport in vivo and reducing oxygen loss to escape hypoxic state, and with adjusting biochemical mechanisms to reduce the damage caused by hypoxia [47][59][60] when H 2S acts a remarkable biological function in both these avoidance and adaptation strategies [6][61].

The sulfur-containing defense system of plants includes elemental sulfur, H 2S, glutathione (GSH), plant chelating agents, various secondary metabolites, and sulfur-rich proteins [62][63]. SO 42− is absorbed and enters the vacuole to regulate the osmotic pressure of the cells, and some are transported to the aboveground part of the plant by high-affinity transporters and enters into the chloroplasts, chromoplasts, and other plastids to participate in the anabolism of SO 32− , these also could occur in the cytoplasm [64][65][66][67]. The formation of ASE and Cys from carrier compounds of H 2S or sulfur with OAS under OAS-TL can occur in both cytoplasm and mitochondria. The Cys is the metabolic precursor of glutathione, phytochemicals, and some sulfur-rich proteins, which is of great significance for the normal physiological activities of plants ( Figure 1 ) [32][68]. 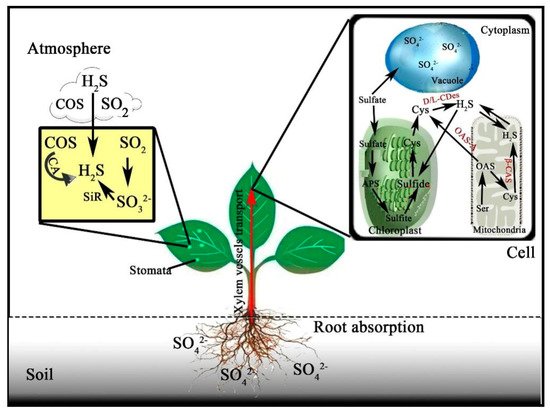 Cysteine is also the metabolic precursor of many important molecular substances such as vitamins, cofactors, antioxidants, and many defense substances, and it could be further metabolized into other sulfur-rich proteins (SRPs), plant chelating peptides and GSH, and so on [66][69]. Meanwhile, O-acetylserine(thiol)lyase isoform a1 (OAS-A1), the main isozyme of OAS-TL, and L-cysteine desulfhydrase 1 (DES1), a cysteine-degrading cytoplasmic thiol enzyme, affected the homeostasis of cysteine in the cytoplasm. In this series of metabolites, H 2S is a very important intermediate product in the sulfur metabolism pathway, and sulfur metabolism has a significant impact on the stress adaptability of plants [70].

The occurrence of adventitious roots is one of the ways for plants to adapt to low oxygen stress in waterlogging [71][72][73]. H 2S produced by microorganisms in soil is little absorbed by roots for its poor water solubility, and the main pathway of H 2S accumulation is endogenous production in root cells. H 2S can promote the elongation of plant roots; for example, a low concentration of exogenous H 2S (0–40 μmol · L −1 ) can promote the growth of pea radicles and the formation of adventitious root formation in cucumber [74][75]. It was also found that the endogenous H 2S, indoleacetic acid (IAA), and NO contents in sweet potato stem tip increased in sequence with the addition of H 2S donor sodium hydrosulfide (NaHS), suggesting that H 2S may induce adventive root formation through IAA and NO [76][77][78].

Photosynthetic efficiency is also an important reference index for the degree of hypoxia stress of plants subjected to waterlogging [79]. As early as 1973, Gassman reported that H 2S could break the disulfide bonds of photosystem proteins in yellow bean leaves and make them reversible. Then, much evidence showed that exogenous H 2S could increase the chlorophyll content of plant leaves [80][81]. For instance, H 2S increases the chlorophyll content of spinach leaves, changes the chloroplast structure, and improves the photosynthetic rate, which may be through the regulation of rubisco activity and the redox modification of sulfhydryl compounds to enhance photosynthesis [79]. Photosynthesis could be promoted with H 2S through promoting photosynthetic enzyme expression, chloroplast biogenesis, and thiol redox modification in Spinacia oleracea seedlings [19].

Cell is the basic constituent unit of the plant, whose surviving or not directly determines the survival state of plants during waterlogging [82]. Further, though the factors influencing cell survival include cytoplasmic redox state, pH, energy supply, metabolic enzyme activity, programmed cell death factor, and many other factors, H 2S is generally involved in these physiological and biochemical processes [3][83][84]. Strawberries smoked with H 2S have been demonstrated that exogenous H 2S could maintain low rot index, high fruit firmness, low respiration density, and polygalacturonase activity, thus extending the fresh-keeping period of strawberries after picking [85]. There are studies that found that H 2S can reduce the plant tissue and cell death against hypoxia stress induced by waterlogging in pea, maize, and Arabidopsis, respectively [16][86][87].

4. How H2S Enhances the Hypoxia Tolerance of Plants during Waterlogging

H 2S interaction with plant hormones withstands waterlogging-induced hypoxia stress. The physiological activities of higher plants are in a complex signal network, and there are different interactions between different pathways to jointly resist abiotic stress, and H 2S changes the balance of different signal substances and regulates plant growth and stress tolerance [31][88]. For example, salicylic acid (SA) is a phenol signaling substance that acts upstream of H 2S and participates in plants' response to stress [23][89]. Moreover, H 2S may be involved in the stomatal closure process induced by abscisic acid (ABA), ethylene and jasmonic acid (JA), and exogenous ABA can significantly improve the H 2S level and L/D-cysteine desulfhydrase activity in leaves, while H 2S synthesis inhibitors can reverse the effects of ABA [17][90]. In the study of maize seedlings, H 2S may act as a downstream signal molecule of NO to respond to waterlogging-induced hypoxia stress [87].

Respiration is the most basic source of power to maintain plant metabolism, growth, and transform nutrients. The plant root respiration is closely related to plant matter metabolism and energy metabolism, and the success of root respiration is one of the important indicators to measure plant root normal function and stress tolerance [40][91]. Malic dehydrogenase (MDH), phosphofructokinase (PFK), and glucose-6-phosphate dehydrogenase (G-6-PDH), whose activities directly affect the respiratory rate, are the key enzymes that regulate the rate of each respiratory metabolic pathway. Additionally, NaHS treatment of chestnut roots could improve the enzyme activities of MDH, PFK, and G-6-PDH to a certain extent, thus improving the stress tolerance of plants [79][92].

In plant cells, H 2S firstly modifies Cys residues with thiol, and then the Cys-SH group is transformed into the Cys-SSH sulfyl group, which directly regulates the activity of proteins [93]. H 2S induces changes in actin cytoskeleton and inhibits actin polymerization through s-vulcanization of actin, proving that H 2S regulates actin dynamics and affects root hair growth. Another study showed that exogenous H 2S promoted the sulfhydrylation of ascorbate peroxidase (APX) in Arabidopsis thaliana and improved its activity [66][94]. In conclusion, S-sulfhydrylation is an integrant pathway for an H 2S signaling molecule to exert biological activity in plants, and proteins, modified with sulfhydrylation, provide direct or indirect support for the acquisition of tolerance to low oxygen stress in waterlogging.

Based on the above descriptions, enhancement of plant waterlogging tolerance involved in the regulation of H 2S was not determined by a single factor, but rather through gene expression, protein modification, regulation of plant hormones, and interaction with other signaling molecules, which were reflected in the reduction in cell death, enhancement of plant photosynthesis, formation of lateral roots at the macro level. In the future, through making full use of advanced gene editing and proteomics technology, the mechanism of H 2S participating in the regulation of plants to improve the waterlogging tolerance will be continuously improved.