Sex- and/or gender-associated differences in cancer incidence, prognosis, response to therapy and, eventually, survival have been fully reported with epidemiological data that show, with few exceptions, a general female advantage.

Although in the last decades very important results based on novel therapeutic approaches have been obtained, cancer is still a major cause of death today, with an increasing incidence worldwide [1]. It is well known that on average men live less than women (in Italy the average age is 80.8 and 85.2 years, respectively, according to data from the National Institute of Statistics), and this difference is even greater in populations with a higher life expectancy [2].

Looking at differences between female XX and male XY cells, evidence based data showed that female cells have higher capabilities to overcome cellular stress through the induction of protective mechanisms, like autophagy, and more antioxidant defenses than male cells [3]. In addition, the random inactivation of one X-chromosome in each single female cell leads to mosaicism and in turn to the advantages associated with genetic heterogeneity. Theoretically, inactivation should balance the expression of X-linked genes between men and women; practically it is incomplete with a significant amount of genes escaping this process to rate greater than 15% of the total. In fact, the presence of mutations in tumour suppressor genes on a single allele, by retaining two functional copies, might represent a protective mechanism [4]. It is important to note that the X-chromosome is significantly enriched for immune-related microRNAs whose deregulation has been associated with the pathogenesis of many kinds of cancers. Recent data reported the identification of nearly 120 microRNAs on the X-chromosome, in contrast to the four found on the Y-chromosome, whereas autosomes on average contain 40-50 of them. These small non coding RNAs (20–25 nt long), acting as post-transcriptional regulators of the gene expression, represent a really powerful regulatory system. Since the X-chromosome is enriched also for immune-related coding genes, the option of sex-associated functional loops can also be hypothesized [5].
Considering the role of sex hormones, oestrogens and androgens have been shown to modulate immune responses, resulting in a different gender susceptibility to diseases [6]. Indeed, female immune functions and responses are generally higher than in males, on one side sustaining a stronger immune response against infections, on the other increasing susceptibility to develop autoimmune diseases [7]. Many important examples of cancer-associated gender differences have been reported, and among them we can highlight colorectal and bladder cancer as well as melanoma [8][9]. Colorectal cancer, the third most common cancer in the world, is characterized by sex- and gender-specific differences, since women appear more prone than men to develop right-sided colon cancer, a more aggressive form of this neoplasia. Interestingly, right and left localized tumours are associated with different molecular abnormalities, i.e., microsatellite instability (MSI) and BRAF mutations are often observed in right-sided colon cancer, whereas chromosomal instability and p53 mutations are more frequent in left-sided tumours. Besides anatomic and physiological differences of the colon (longer transverse colon in women), hormonal factors might underlie the observed differences, since oestrogen appears to be a protective factor against MSI, as suggested by the increased risk of MSI-high colon cancer in older women and by the reduced risk in postmenopausal women undergoing hormone replacement therapy [10][11]. In addition, socio-cultural disparities, as dietary factors, should be considered.
Gender discrepancy also exists in the incidence of bladder carcinoma, the fourth most common cancer in men and the seventeenth in women worldwide (Figure 1). However, women are more prone to both recurrence and progression of the disease. One explanation could rely on differences of female and male anatomic sites: the higher frequency of infections (e.g., cystitis) in women might cause delayed diagnoses with negative effects on prognosis and quality of life. In addition, gender-associated specificities, such as smoking habits and occupational risk factors, may play a role [12]. 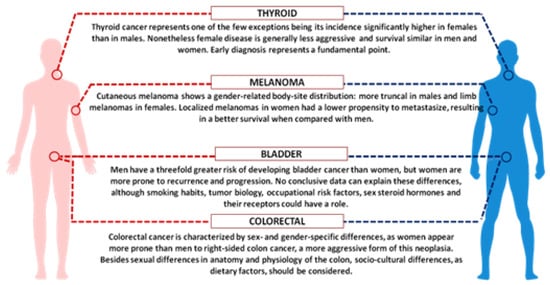 Figure 1. Schematic picture showing key examples of sex and gender disparities in cancer.
Finally, we should focus on cutaneous melanoma, which show better results in women compared with men [13]. Although male/female incidence ratios vary widely across continents, the female survival advantage has been reported very consistently everywhere and gender remains an independent prognostic indicator after adjustment for thickness and body sites. Differences in detection might be explained by the known gender differences in the body-site distribution: more truncal melanomas in males and limb localization in females. Furthermore, men are less likely to engage in preventive actions. Since cancer is the result of failed immune surveillance, the divergent effects of male and female sex hormones on anticancer immunity could contribute to the higher cancer incidence and poorer outcome in men, particularly in highly antigenic tumours like melanoma [14]. In recent years, several immunological therapies have been approved for different types of tumour, initially based on blocking antibodies against the programmed death receptor-1 (PD1) or its ligand PDL1. These target molecules are expressed on T-lymphocytes and on tumour cells and the receptor-ligand binding interferes with T cell-mediated responses. Treatments with immune checkpoint inhibitors (now developed against many other surface markers), impairing the receptor-ligand binding and the consequent inhibitory response, promote the T-cell activation. A number of meta-analyses, run to evaluate the efficacy of these inhibitors, showed a certain degree of heterogeneity between men and women. The immune checkpoint inhibitors can improve the overall survival for patients with advanced cancers, particularly melanoma and non-small-cell lung cancer, and the extent of the benefit appears sex-dependent. Unexpectedly, despite the overall strong female immune responses, the results derived from clinical trials indicated a smaller benefit for women [15][16]. A review paper analysing over 11,000 patients treated with immune checkpoint inhibitors (i.e., ipilimumab, tremelimumab, nivolumab, or pembrolizumab) in twenty randomized controlled trials, evidenced that the overall survival was consistently higher for men than for women, regardless of cancer histotype, line of treatment and type of administered drug [16]. Further analysis, focused on phase III RCTs of ICIs efficacy in advanced cancers, confirmed the more favourable outcomes in men than in women, particularly with anti-CTLA-4 agents [17]. Even though the biological evidences behind the different efficacy in the two sexes are still lacking, we could suppose that the female immune system has per se a strong effect in determining the anti-CTLA4 and anti-PD1 efficacy, thus possibly limiting the effect of other variables. Although we could note that the expression of PD-L1 appears to be directly or indirectly controlled by several X-linked microRNAs [18], the suggested role of PD-L1 expression level as a predictive biomarker of efficacy is quite controversial [19].
In conclusion, it is absolutely relevant that preclinical studies use animals of both sexes to investigate the molecular mechanisms underlying cancer development and progression. Further, sex and gender should be considered in clinical trials for more accurate diagnosis, correct stratification of patients and proper therapies. In the era of precision medicine, the goal will be to identify molecular drivers, possibly different in males and females, to predict responders and non-responders and select the best therapeutic action for each one. According to the recently approved Italian law 3/2018, for “Diffusion and Application of Gender-specific Medicine in the National Health Service”, sex and/or gender should be included in all the health care aspects, hopefully through new specific guidelines.