The presence of S100P protein in cancer cells is strongly associated with reduced survival times of patients suffering from a number of cancers. It has been shown previously that S100P is a potent inducer of metastasis in a model system and it is likely that this metastasis-inducing ability underlies its association with reduced patient survival. However, the molecular mechanisms involved in S100P-driven metastasis are only now beginning to be elucidated and the evidence points to S100P enhancing cell migration and cell invasion.  It is now shown that in the same cell system S100P enhances cell migration by two separate mechanisms. One pathway being intracellular, involves changes in the numbers of focal adhesions.  The second pathway occurs at the cell membrane and does not involve changes in the number of focal adhesions, but involves extracellular/membrane bound S100P and is inhibited by specific inhibitors of plasmin. Importantly, mutation of the C-terminal amino acid of S100P, not only abolishes both pathways, but also markedly reduces the metastasis-inducing ability of S100P, thus identifying a possible target for the reduction of S100P-induced metastasis.

Elevated levels of some EF-hand-containing, calcium-binding members of the S100 family of proteins are associated with the development of many human cancers [1][2]. Increased immunohistochemical levels of S100P are associated with markedly reduced survival times of patients with breast [3][4], hepatocellular [5], early stage non-small cell lung [6], colon [7][8], and ovarian [9][10] cancers. The associations of S100P with reduced patient survival times are likely to arise from the ability of S100P to induce a metastatic phenotype [3]. However, the molecular pathways by which S100P exerts its metastasis-inducing potential are not yet fully understood [2].
The crystal structure of calcium-bound S100P protein shows that it is a homodimer with each 95-amino-acid monomer displaying the four α-helical structures common to most other S100 proteins [11]. Helix 4 of each monomer ends at amino acid 92, leaving a short, three-amino acid, presumably unstructured sequence, GLK, at the C-terminus [11]. In the apo-form, the presumably unstructured C-terminal region was found to be six amino acid residues longer, KYFEKAGLK, using Nuclear Magnetic Resonance techniques [12]. C-terminal regions of other S100 proteins, for example, S100A4 [13], have been reported to be unstructured and dynamic.
S100 proteins act by interacting with extracellular and intracellular protein targets [14]. Thus, extracellular S100P can interact with the cell-membrane-located RAGE receptor, thereby activating intracellular signalling pathways [15] and with the extracellular plasminogen activator, tPA, to enhance plasmin-dependent cell invasion [16], but its relationship to metastasis is unknown. Intracellular S100P can also interact with cytoskeletal proteins, ezrin [17], IQGAP1 [18], and non-muscle myosin II isoforms A (NMMIIA) and C (NMMIIC) [19], all with high nM range affinities [17][18][19], often causing increased cell migration [19][20]. In the case of NMMIIA, it has been shown using Fluorescence Lifetime Imaging that S100P can interact with NMMIIA in living cells [19]. In cells in which NMMIIA had been knocked down using siRNA, S100P induction lost its effect on cell migration [19]. Furthermore, in an inducible system, expression of S100P led directly to redistribution of NMMIIA filaments and their dissociation. In a cell-free system, S100P can partially dissociate myosin IIA filaments [19]. These observations taken together show that S100P can interact with myosin IIA in vivo and, through dissociation of the NMMIIA filaments, can affect cell migration. It has been shown previously that deletion of the C-terminal lysines of the related metastasis-inducing protein, S100A4, abrogates its metastasis-inducing potential [21][22] in a well-characterised rat model system of human breast cancer metastasis [3][23][24][25].

2. The Effect of C-Terminal Mutants of S100P on Tumorigenesis and Metastasis

The benign rat mammary tumour-derived cell line, Rama 37, has a long track record of testing for the metastatic potential of experimentally-expressed genes and proteins when injected into the mammary fat pads of immunocompetent syngeneic rats [3][23][25][26][27]. Genes and proteins, including S100P, which confer a metastatic phenotype upon the benign Rama 37 cells in this system, have subsequently been shown to be associated also with reduced patient survival time when they are found in the cancer cells of human patients [3][28][29][30]. Transfected Rama 37 cell clones and pools expressing wild-type S100P, the K95A, or ΔK95 mutant S100P proteins exhibited similar incidences of mammary tumour formation (Table 1). Thus, the C-terminal mutants did not affect the tumorigenicity of the cells. Cells expressing wild-type S100P exhibited high incidences of metastasis, with 70% (cell clone) and 75% (cell pool) of tumour-bearing rats exhibiting lung metastases (Table 1), similar to those reported previously [3]. Examples of immunocytochemical staining of the tumours and metastases arising from injection into the mammary fat pads of syngeneic rats of Rama 37 cells expressing wild-type S100P have been published previously [3]. The cell clone and pool expressing K95A mutant S100P protein exhibited incidences of metastasis of 33% and 47%, which were lower than those of the wild-type clone and pool (Table 1). The transfected cell clones and pools expressing ΔK95 mutant S100P protein exhibited incidences of metastasis (clone 16%, pool 11%), which were lower than wild-type S100P-expressing clone and pool (Table 1). Overall, mutation/removal of the C-terminal amino acid of S100P significantly reduces its ability to cause metastasis in a rodent model system in vivo.
Table 1. Incidences of tumours and metastases.

Wild-type rS100P protein bound to rNMMIIA in vitro with a Kd of 370–470 nM, consistent with previously published values of 430–500 nM [19]. The K95A and ΔK95 mutant rS100P proteins exhibited 6 to 13-fold reduced affinity for immobilised rNMMIIA (equilibrium Kd, 2.3 μM and 2.7 μM; kinetic Kd, 4.1 μM and 6 μM, respectively) than the wild-type protein, mainly due to an 8 to 13-fold increased rate of dissociation. The observation that the association rate of S100P with NMMIIA in vitro was not affected by the C-terminal mutations but that the dissociation rate was suggests that the C-terminal lysine might be required not for initial binding but for structural stability of the complex.
Immunofluorescence staining of fixed, control, S100P-negative Rama 37 cells revealed cytoplasmic localisation of NMMIIA filamental structures along the edges of the cells (Figure 1a). In cells expressing wild-type S100P, there was a 20.5-fold reduction in the proportion of cells exhibiting this control cell distribution of NMMIIA (p < 0.0001). Whilst there was some background, possibly non-specific, staining for S100P in the S100P-negative cells (Figure 1b and Figure 3B) that was not observed in Western blots (Figure 3A below and Clarke et al. [16]), cells expressing wild-type S100P protein exhibited markedly stronger staining with intense foci of S100P in the cytoplasm and nuclear regions of the cells (Figure 1e). There were extensive clusters of NMMIIA foci, mainly at the cell periphery (Figure 1d), with only some colocalising with S100P, predominantly in the perinuclear region of the cells (Figure 1f). The foci of S100P staining in the wild-type-S100P-expressing Rama 37 cells observed here is similar to that observed previously in MCF-7 cells [19] using a glass substratum; in contrast, in the present experiments, the cells were grown on a fibronectin substratum. Thus, the punctate staining pattern has been observed in two different cell systems, grown on two different substrata. However, the strong nuclear staining observed in the MCF-7 cells was not seen in the present experiments. The structural basis of the punctate staining of wild-type S100P and how it might enhance cell migration in the MCF-7 cells [19] and in Rama 37 cells in the present experiments is unknown. 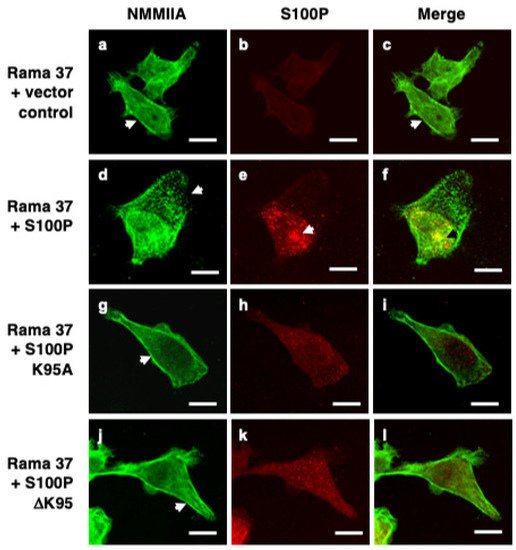 Figure 1. Immunofluorescence localisation of NMMIIA and S100P in cloned transfected cells. Rama 37 cells transfected with empty expression vector (Rama 37 + vector control; (a–c)) or Rama 37 cells overexpressing wild-type S100P (Rama 37 + S100P; (d–f)), K95A mutant S100P (Rama 37 + S100P K95A; (g–i)), or ΔK95 mutant S100P (Rama 37 + S100P ΔK95; (j–l)) were grown on fibronectin-coated coverslips for 48 h prior to fixation, permeabilisation, and staining using secondary antibody coupled to fluorescein isothiocyanate for NMMIIA (a,d,g,j) or Cy-3 for S100P (b,e,h,k). Cells were then mounted and viewed using a Zeiss LSM510 confocal laser scanning microscope. Merged images (c,f,i,l) are shown with overlaps in yellow. Arrows in (a,c,g,j) show filamental structures along the edge of the cell. The arrow in (d) shows foci of NMMIIA staining near the leading edge of the cell, which did not co-localise with S100P (f). The arrows in (e,f) show a large focus of S100P co-staining with NMMIIA in the perinuclear region. Bars, 10 μm in all panels.
Although cells expressing the S100P mutant proteins (Figure 1g–l) exhibited less intense fluorescence than the wild-type protein, they did not exhibit to the same extent the localised foci of S100P or NMMIIA found in cells expressing wild-type protein. Instead, clear filamental structures of NMMIIA were observed at the cell periphery (Figure 1g,j) that resembled those observed in the control S100P-negative cells (Figure 1a). The proportion of K95A and ΔK95 mutant-S100P-protein-expressing cells that displayed a NMMIIA filamental structure resembling that of the S100P-negative control cells was not significantly different from the S100P-negative cells (K95A, p = 0.506; ΔK95, p = 0.818). It has been reported that S100P does not bind to NMMIIB [19]. Thus, it might be expected that the presence of S100P would not be associated with altered cytoskeletal arrangement of NMMIIB. The percentage of S100P-negative and S100P-expressing cells that exhibited the NMMIIB filamental structure found predominantly in the S100P-negative control cells was determined. The results showed that for cells expressing wild-type S100P or the K95A or ΔK95 mutant proteins, the percentage of cells expressing the myosin distribution characteristic of the S100P-negative cells was not significantly different from the S100P-negative control cells (p = 0.973, 0.919, and >0.9999, respectively).
In S100P-negative, non-metastatic control cells, vinculin and paxillin were complexed into large foci at the ends of bundled actin filaments. Cells expressing wild-type S100P exhibited a 4.3- or 3.5-fold reduction in the mean number of vinculin- or paxillin-positive focal adhesions per cell, respectively, compared to S100P-negative control cells (Table 2; both p < 0.0001). In contrast, cells expressing the K95A mutant S100P protein showed 2.1- and 1.8-fold higher numbers of vinculin and paxillin focal adhesions per cell, respectively, than wild-type S100P cells (vinculin and paxillin, both p < 0.0001) but 48% and 53% of those in the S100P-negative, control cells (Table 2; vinculin and paxillin, both p < 0.0001). ΔK95-mutant S100P protein exhibited mean numbers of vinculin and paxillin clusters per cell (Table 2) 5.1- and 4.5-fold higher, respectively, than cells expressing wild-type protein (both p < 0.0001) but, surprisingly, also 1.2- and 1.3-fold higher than the control cells (vinculin, p 0.0017; paxillin, p < 0.0001). These results suggest that mutation/deletion of the C-terminal lysine reduces the ability of S100P to alter the cytoskeletal organisation, a possible consequence of the reduced interaction of S100P with NMMIIA.
Table 2. Quantitation of focal adhesions in cell lines with and without metastatic potential.

4. The Effect of S100P Mutants on Transwell and Scratch-Wound Cell Migration 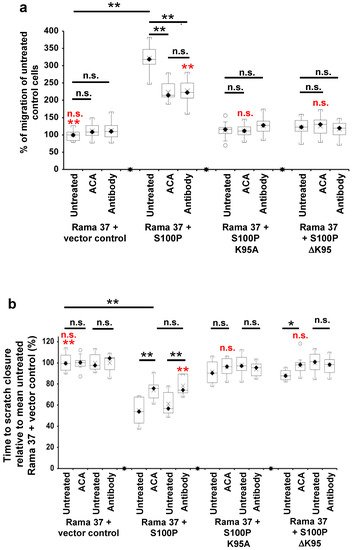 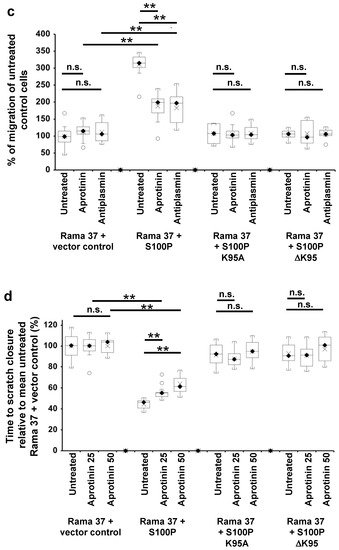 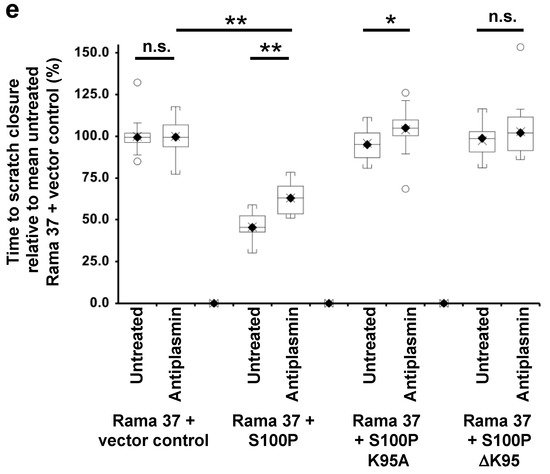