Retrofitting historic constructions can play a key role in reducing European energy consumption and consequent emissions. What is more, beyond the opportunity for tackling climate change, thermal retrofits can improve indoor comfort while lowering operational costs, factors that are fundamental to ensure the continued use of historic constructions over time, and with that, improving their preservation and durability. The suitability of thermal insulation for this scope is still a debated topic. Thus, this study aims at contributing to the discussion by providing an overview on the feasibility of adopting thermal insulation for retrofitting external walls of historic buildings while preserving their significance and unique identities.

The key role of retrofitting existing constructions in Europe is clear, and the specific case of historic buildings has great importance for several reasons. First, 26% of the European building stock dates to before 1945 [1]. Hence, a considerable share of the existing buildings is composed of historic constructions [2][3], defined herein as traditional constructions [4] from before 1945, as they use some technologies, materials and solutions that are no longer being used, thus acting as testimonies of technical and architectural historic paradigms. This percentage gets even higher when countries like Belgium, Denmark, Italy, Latvia and Sweden are considered (27–38% of existing buildings can be ranked as historic in this scenario, according to the European Project RIBuild [5]). Consequently, retrofitting historic constructions can play a key role in reducing European energy consumptions [6] and consequent GHG emissions, thus collaborating in the mitigation of climate change, as has already been underlined by several cultural heritage experts [7].

Given the growing urgency and importance of the topic, the scientific interest in energy efficiency and thermal comfort in historic buildings has strongly increased in the last few decades [8]. Many solutions are thus provided in the literature, and one of them is the adoption of thermal insulation for retrofitting external walls [9], which is a complex intervention for several reasons. It is not always feasible in historic constructions because of the need to preserve their valuable and characteristic features, whereas no similar concern affects interventions on existing buildings with no cultural value [10]. Furthermore, for heritage buildings, European standard EN16883:2017 [11] requires a first phase of recognition of the significance and specific values of the construction, based on which unsuitable measures should be excluded from the intervention design. Then, depending on the level of heritage significance, on-site visits from third parties such as heritage or planning officers may be needed [11]. Finally, even when the adoption of thermal insulation appears feasible, attention must be paid to the integration of the retrofit with the original construction, and the designer may be required to justify the technological and scenic integration of the chosen measures with the specific historic building considered (e.g., a document in this regard is required by the Italian Cultural Heritage offices [10]).

The strategic role of an energy-efficient renovation of the existing building stock in the fight against climate change is evident, but historic buildings must be treated with special attention [12][13]. Even though climate change mitigation in the heritage sector is necessary, it is a very challenging task that needs holistic approaches [14]. Interventions designed for valuable historic constructions must undergo a preliminary phase of recognition of the values that characterize the specific building [15]. This step allows understanding the building’s significance, which is important as relative degrees of cultural significance may lead to different conservation actions at a place (Art. 5.2 of the Burra Charter [16]). Thermal retrofits can be successively defined via considering solutions that comply with the transformability constraints imposed by the conservation principles on the specific building taken into account [17]. In this context, four aspects appear very relevant when it comes to thermal retrofits: authenticity, integrity, reversibility [18] and compatibility [19]. The first three concepts are discussed in detail herein to evaluate the feasibility of introducing insulation in historic walls. Some concepts that appear to be useful for the discussion are excerpted from the international charters on conservation and restoration of cultural heritage and reported in Table 1.

Table 1. Extracts from international charters on conservation and restoration of cultural heritage.

Compatibility is not addressed in this analysis as it was examined in a separate study [9], which observed that the main problems regard the physical compatibility of insulation with historic materials in terms of water transport and moisture-related degradation risks. The outcomes of the study indicated that the capillary water absorption and vapor permeability of the insulation are of major importance, plus the correct choice of materials (and their properties) depends on the type of scenario considered (e.g., type of indoor and outdoor climate, exposure and thickness of the retrofitted component as well as the position of the insulation).

When accounting for reversibility (Art. 15.2 of the Burra Charter [16]), new additions to historic buildings should be recognizable and removable with minimal or absent damage to the original fabric. They should not be so different that they stand out, but they should be distinguishable from authentic materials [19] so that in the future, the unoriginal materials can be removed. Anyway, the theoretical principle of reversibility is an ideal to aim for, but it is never achievable, as total reversibility cannot be obtained in practice. Thus, interventions must offer a “certain degree”, preferably high, of reversibility [24]. From this point of view, thermal mortars appear to be a very suitable solution, as they offer a texture that is similar to original renders and plasters, different from other insulation materials. Furthermore, they are expected to be distinguishable from the original ones because of the presence of lightweight aggregates, which is normally recognizable. Plus, they are considered to be easily removable [25]. Nevertheless, other thermal insulation materials can also be suitable for the scope if finished with rendering and plastering systems that recall the original appearance of historic surfaces.

Another important concept in heritage conservation is minimal intervention, meaning that retrofits should “do as much as necessary and as little as possible” [26]. Thus, a range of options (Art 15.1 of the Burra Charter [16]) should always be considered to evaluate what interventions can better respond to the circumstantial necessities while minimizing the loss of original fabric, especially when it is considered to hold cultural value (Art. 6 of the New Zealand Charter [23]). These considerations suggest that in historic buildings, insulation is feasible only when all the interventions involving a smaller impact on the original structures are proven to not be enough to meet the goal of the retrofit [27]. 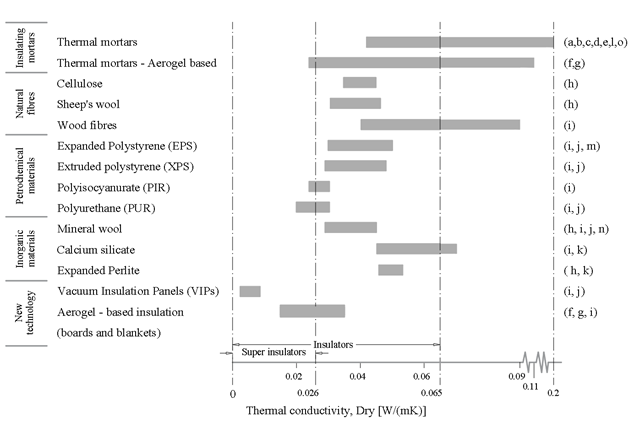 All the thermal mortars considered had much better thermal conductivities than standard gypsum and lime mortars, typically in the range of 0.4–0.8 W/(m·K) according to standard EN 12524:2000 [31]. Some of the solutions emerged as competitive with traditional insulations, having a thermal conductivity lower than 0.065 W/(m·K), even though most thermal mortars seemed to exceed this value.

All in all, thermal mortars appear to be interesting for further investigation and application in temperate climates which have moderately cold winters. Furthermore, the advances in material technology do currently offer thermal mortars containing aerogel, which show very high thermal performance and seem promising even for cold climates.

Apart from energy savings, thermal insulation can improve indoor thermal comfort during the heating season, raising the surface temperatures of walls on their interior side [32] while reducing draughts and asymmetries in radiant temperatures [33], but it may lead to overheating risks during summer, especially in southern European countries [34]. From this point of view, internal insulation is more effective than exterior insulation for reducing radiant temperature asymmetries [35], but it is also likely to lead to higher risks of summer discomfort because of its stronger impact on the thermal inertia [36].

Concerning the feasibility and efficacy of adopting thermal insulation to retrofit historic walls, some overall indications emerged from the literature:
- Intervention is excluded for surfaces holding cultural or tangible values or subjected to integral protection. When these circumstances do not occur, insulation may be installed, especially if the original rendering or plastering is so damaged that it needs to be replaced. It is generally preferable to use internal insulation over external insulation to maintain the external appearance of buildings. Anyway, external interventions are often feasible if the façade’s appearance is reconstructed to conserve the building’s identity, especially for buildings whose importance is related to the cultural value of “groups of buildings” or the landscape and not to the singular construction.
- Interventions that cause dimensional changes at window and door openings or where original surface details are valuable should be avoided. In all cases, the original proportions and spatial perception of the building and its parts should be preserved by adopting moderate thicknesses of insulation. Thus, solutions providing good thermal performance with a small thickness of insulation appear more viable than other solutions. Furthermore, insulations offering a wide range of available thicknesses appear to be preferable.
- Even though adopting interior insulation is generally more feasible, it can lead to damper walls during the heating season, and thus it should be carefully designed to avoid reduction of thermal performance and increased degradation risks for the wall. Internal insulation reduces the benefits of thermal inertia to a higher extent than exterior insulation, potentially increasing thermal discomfort during summer. Nonetheless, it may have a positive effect in reducing winter energy demands for buildings subjected to intermittent heating because it decouples the thermal capacity of the wall from the indoor air.

Furthermore, thermal mortars arose as a very feasible and potentially effective solution for historic walls because the following reasons:
- Unlike insulation boards and blankets, they do not need any anchoring points or adhesive layers;
-They offer great flexibility for the thickness, which can be easily adapted to the dimensional restriction that the intervention may require, and it can be adjusted near valuable decorations to leave them clearly visible;
- They adapt to uneven surfaces and provide gap-filling abilities, consequently allowing for obtaining continuous contact between the insulation layer and the substrate, even in the case of irregularities, cracks and other damages which are quite commonly found in historic components;
- They can be applied by mechanical spraying, noticeably easing the intervention; They are more able than insulation boards and blankets to offer a similar texture to the original renders and plasters;
- Depending on the mortar mix, they can offer interesting thermal conductivities (lower than 0.065 W/(m·K)), especially when containing advanced materials such as aerogel or using other innovative formulations.